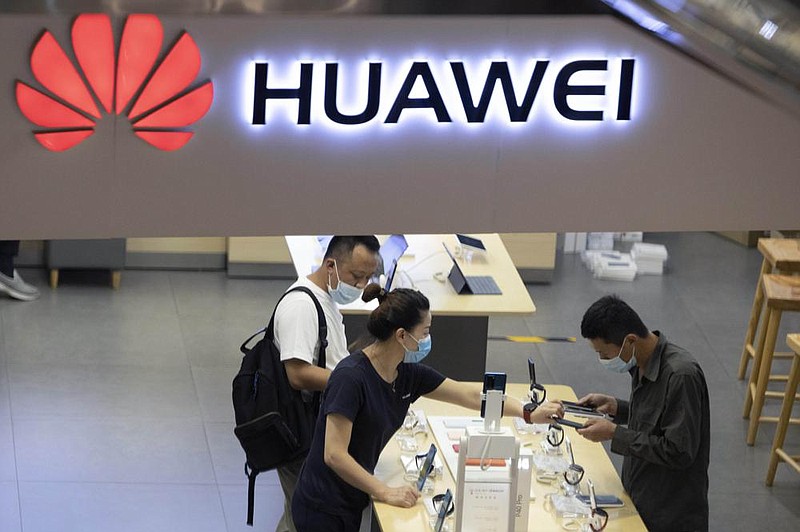 LONDON -- A technology research firm says Huawei has overtaken Samsung to become the world's biggest smartphone seller, as its home market in China emerged from the coronavirus pandemic better off than other economies.

Analysts at Canalys said Thursday that Huawei shipped 55.8 million devices in the second quarter of 2020.

While the figure was down 5% compared with a year ago, it was a smaller decline than rival Samsung, which saw smartphone sales slide 30% to 53.7 million.

Huawei still faces U.S. government sanctions restricting its international business, but it has come to dominate its domestic Chinese market, said Canalys, which estimated that the company's shipments in China rose 8% in the April-June period. Mainland China now accounts for 70% of Huawei's total smartphone sales, it said.

"If it wasn't for covid-19, it wouldn't have happened," senior analyst Ben Stanton said. "Huawei has taken full advantage of the Chinese economic recovery to reignite its smartphone business." He noted that Samsung has a tiny market share in China, while the South Korean company's core markets, including the U.S., Europe, Brazil and India, have been ravaged by virus outbreaks and lockdowns.

Sanctions aimed at crippling Huawei are part of a broader global battle between the U.S. and China over technology and trade. The restrictions mean Huawei phones now face a distinct disadvantage outside China because they can only run a stripped-down open source version of Google's Android operating system and don't come with the U.S. search giant's apps like Chrome, YouTube and Google Maps. Users also have to download apps through Huawei's own app store, not the Google Play store.

In China, popular homegrown apps for services like shopping and messaging help fill that gap.

Huawei might not be able to hold on to the top spot as the global economy recovers, because wireless carriers are increasingly wary of its devices, Canalys said.

Huawei phones are popular in Europe and Asia but little known in the U.S., where the company's telecom switching gear has been effectively blocked for years over fears it could be used for spying by China's communist leaders.

Samsung, which in addition to smartphones also supplies components like memory chips, is navigating the tumult of the coronavirus pandemic along with the rest of the tech industry. The company warned of a slump in its consumer business in the second quarter. But sales of smartphones, televisions and other gadgets have started to recover, and the company said demand is likely to get a boost from the introduction of new game consoles and phone models, expected from Apple Inc. and Samsung itself.

[Video not showing up above? Click here to watch » https://www.youtube.com/watch?v=i99Ne0vaSvs]

"Covid-19 continues to cloud the demand outlook but structurally speaking, the demand is there," Bloomberg Intelligence analyst Anthea Lai said. "We're getting there to have more 5G smartphones coming from Samsung and the expectation in the second half is to have more demand from consumers."

Net income increased to $4.6 billion in the three months that ended June 30, the company said in a filing on Thursday. The South Korean company had reported preliminary numbers earlier this month that showed operating profit rose 23%.

Information for this article was contributed by staff members of The Associated Press and by Sohee Kim of Bloomberg News.