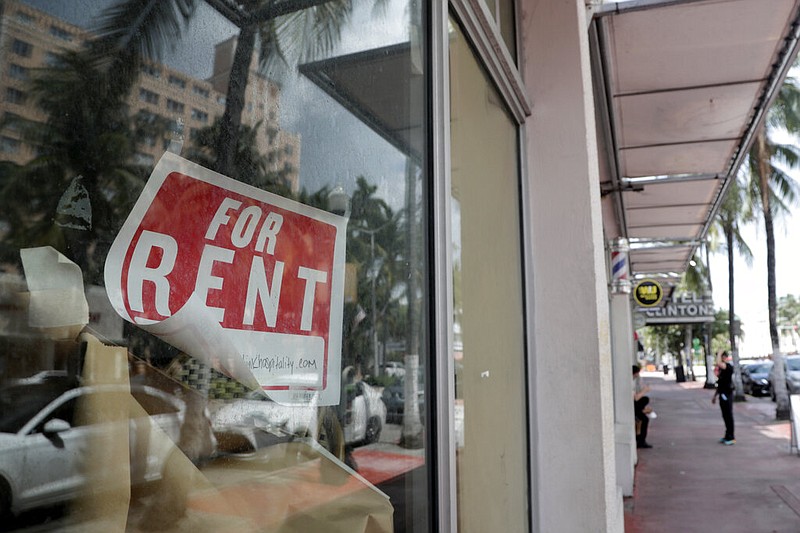 A "For Rent" sign hangs on a closed shop during the coronavirus pandemic in Miami Beach, Fla., in this July 13, 2020, file photo. - Photo by AP / Lynne Sladky

WASHINGTON -- The coronavirus pandemic sent the U.S. economy plunging by a record-shattering 32.9% annual rate last quarter and is still inflicting damage across the country, squeezing already struggling businesses and forcing a wave of layoffs that shows no sign of abating.

The collapse in gross domestic product in the April-June quarter came as a resurgence of the viral outbreak has pushed businesses to close for a second time in many areas.

Many states have imposed travel restrictions on visitors from the states that have reported high levels of cases, hurting hotels, airlines and other industries that depend on travel.

That has led to big job losses. In a sign of how weakened the job market remains, more than 1.4 million laid-off Americans applied for unemployment benefits last week. It was the 19th-straight week that more than 1 million people have applied for jobless aid. Before the coronavirus broke out in March in the U.S., the number of Americans seeking unemployment checks had never exceeded 700,000 in any one week, even during the 2007-09 recession.

An additional 830,000 people applied for unemployment benefits under a new program that for the first time extends eligibility to self-employed and gig workers. All told, the government says roughly 30 million people are receiving some form of jobless aid, though that figure might be inflated by double-counting by some states.

The plunge in GDP "underscores the unprecedented hit to the economy from the pandemic," said Andrew Hunter, senior U.S. economist at Capital Economics. "We expect it will take years for that damage to be fully recovered."

That's because the virus has taken square aim at the engine of the American economy -- consumer spending, which accounts for about 70% of activity. That spending collapsed at a 34.6% annual rate last quarter as people holed up in their homes, travel all but froze, and shutdown orders forced many restaurants, bars, entertainment venues and other retail establishments to close.

With little hope of a swift recovery in the U.S., the picture looks dim for many of the jobless.

Since she was laid off by a tech industry nonprofit in mid-May, Miranda Meyerson has been trying to find another job and to sign up for unemployment benefits.

"It's just incredibly frustrating and demoralizing," she said. Potential employers seem to be delaying hiring decisions.

Meyerson and her partner had moved from New York to Oakland, Calif., in March. The move complicated her efforts, so far futile, to collect benefits from a swamped California unemployment benefits system.

"Nobody gets back to you," said Meyerson, 38. "You feel like there's only so long you can submit [applications] into a void."

The government's estimate of the second-quarter fall in the gross domestic product has no comparison since records began in 1947.

By comparison, during the worst of the previous recession, gross domestic product -- the total of all goods and services produced in the country -- shrank at an annualized 8.4% pace in the final quarter of 2008. The single largest annualized quarterly decline since the Commerce Department's records began was 10% in early 1958.

So steep was the economic fall last quarter that most analysts expect a sharp rebound for the July-September period. But with coronavirus cases rising in the majority of states and the Republican Senate proposing to scale back aid to the unemployed, the pain is likely to continue and potentially worsen in the months ahead.

The second surge of the virus does appear to be leveling off, but cases are still rising in close to 30 states.

The nearly $3 trillion worth of pandemic relief measures approved earlier by Congress has clearly buoyed the economy, but the effect of those initial programs is ebbing.

Many small businesses are running out of loans and grants that kept paychecks going out to at least some workers. State governments are distressed.

The pain could soon intensify: The supplemental $600 in weekly federal unemployment benefits is expiring, and Congress is squabbling about extending the aid, which might be done at some reduced level.

"The risk of temporary job losses becoming permanent is high from repeated closures of businesses," said Rubeela Farooqi, chief U.S. economist at High Frequency Economics. "That could result in an even slower pace of recovery."

Last quarter's economic drop followed a 5% fall in the January-March quarter, during which the economy officially entered a recession, ending an 11-year economic expansion that was the longest on record in the United States.

President Donald Trump's campaign said Thursday's report reflected a period "when much of the economy was essentially closed down to save millions of American lives."

Many economists note that the economy can't fully recover until the coronavirus is defeated -- a point stressed Wednesday by Federal Reserve Chairman Jerome Powell. He warned that the pandemic has been endangering a modest economic recovery and that, as a result, the Fed plans to keep interest rates pinned near zero well into the future.

Daco said the expiration of the $600 in federal unemployment aid means that many households could suffer a loss of income in the range of 50% to 75%.

That could further weaken spending, fueling a downward economic spiral.

"Not only have we plateaued, but we may be losing ground," said Diane Swonk, chief economist at the accounting firm Grant Thornton in Chicago. "To have these kinds of numbers in July when many in Congress hoped this would be over by summer underscores how unique and persistent the covid crisis is."

The economic harm from the virus is extending well beyond the United States. On Thursday, Germany reported that its gross domestic product tumbled 10.1% last quarter. It was the biggest such drop since records began in 1970. And Mexico's economy sank 17.3% last quarter, also a record. Unlike the U.S. figures, those numbers are not annualized rates.

The gross domestic product figures show how severely the economy suffered and could "jolt Congress into action" heading into August, said Wendy Edelberg, director of the Hamilton Project and a senior fellow in economic studies at the Brookings Institution.

"One thing that policymakers, and all of us readers of this report, can take from it is that this is the outcome we want to avoid," Edelberg said. "We want to avoid having to go through such a dramatic shutdown again, because this is the pain that it causes."

Information for this article was contributed by Martin Crutsinger and Paul Wiseman of The Associated Press; by Don Lee of the Los Angeles Times; by Ben Casselman of The New York Times; and by Rachel Siegel and Andrew Van Dam of The Washington Post. 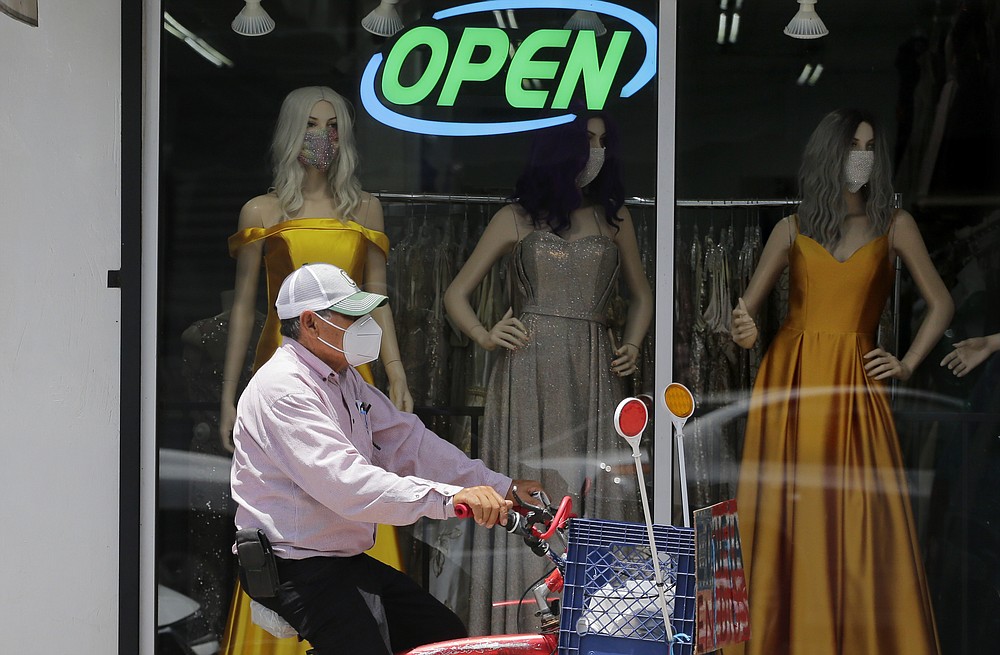 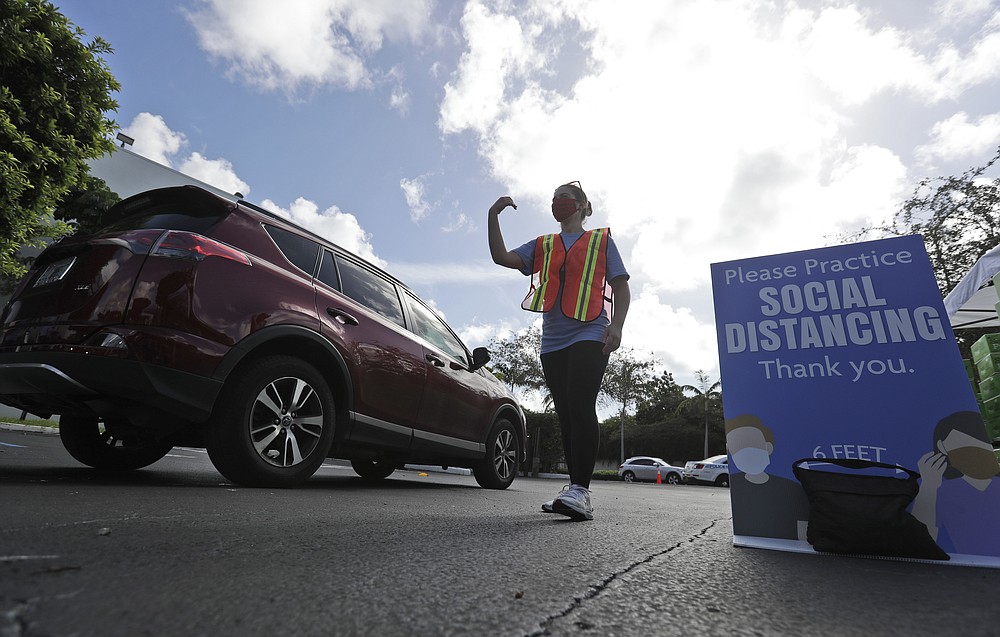 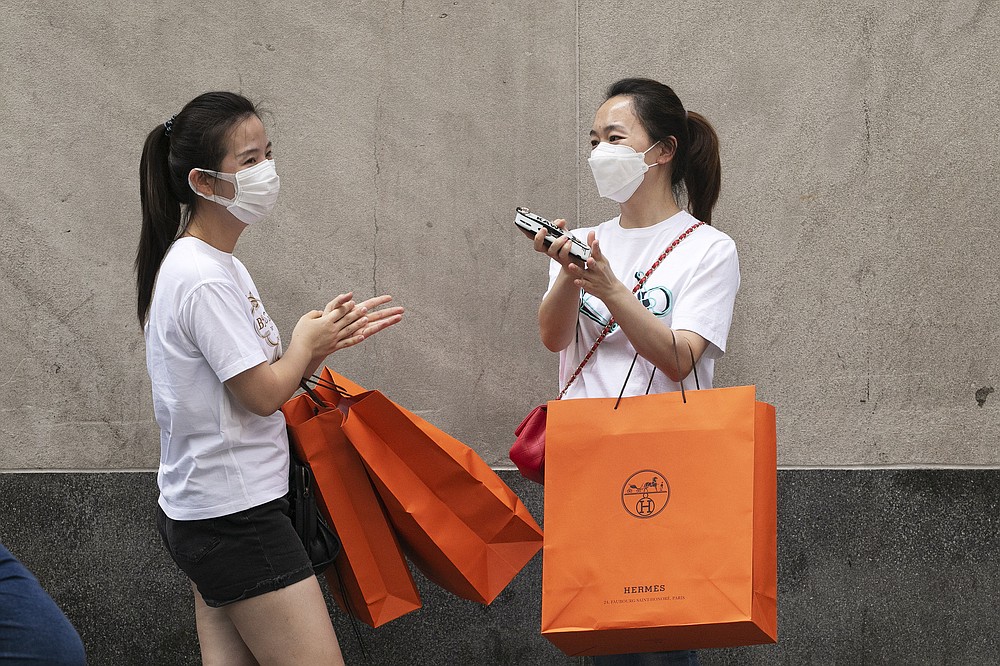 Women carrying Hermes shopping bags use hand sanitizer as they walk on Wall Street, Thursday, July 30, 2020, in New York. Stocks are falling on Wall Street Thursday after reports showed that layoffs are continuing at a stubborn pace and that the U.S. economy contracted at a nearly 33% annual rate in the spring. (AP Photo/Mark Lennihan) 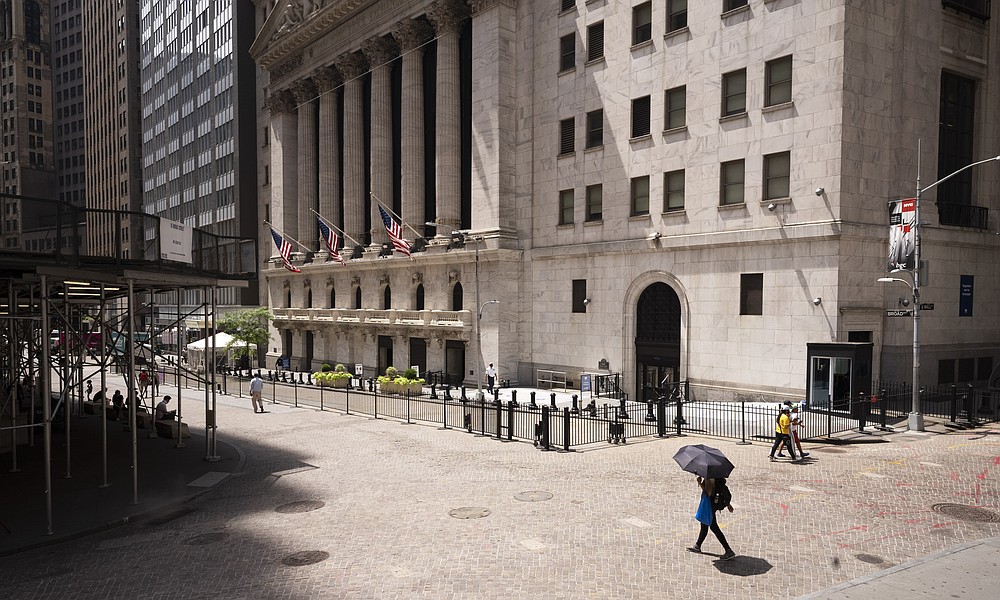 People pass the New York Stock Exchange, Thursday, July 30, 2020. Stocks are falling on Wall Street Thursday after reports showed that layoffs are continuing at a stubborn pace and that the U.S. economy contracted at a nearly 33% annual rate in the spring. (AP Photo/Mark Lennihan) 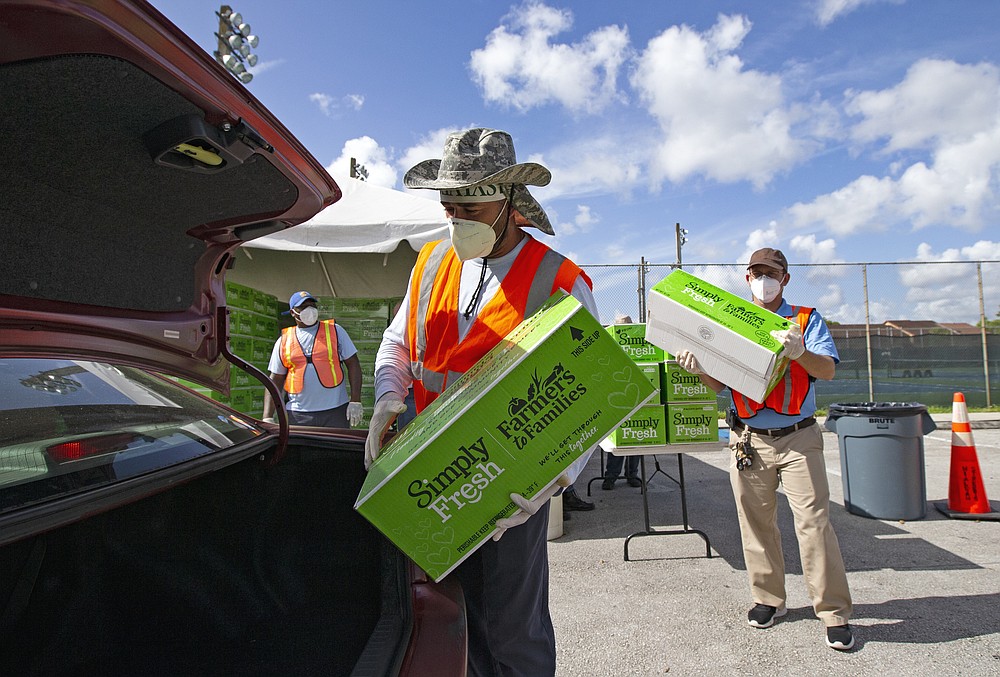 City of Hialeah employees loading up food and vegetables to hundreds of cars lined up for hours early during a drive-thru food distribution at the Goodlet Park in Hialeah, Fla., as the coronavirus pandemic continues on Wednesday, July 29, 2020. The City of Hialeah in partnership with Feeding South Florida organized the drive-thru food distribution. Food is distributed first-come, first-served while supplies last. (David Santiago/Miami Herald via AP) 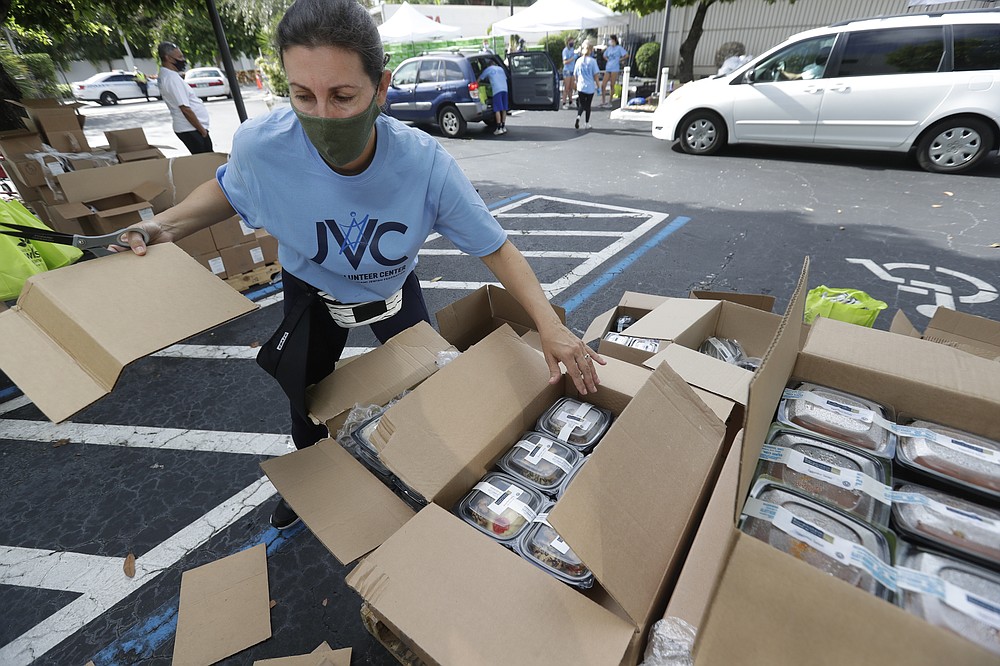 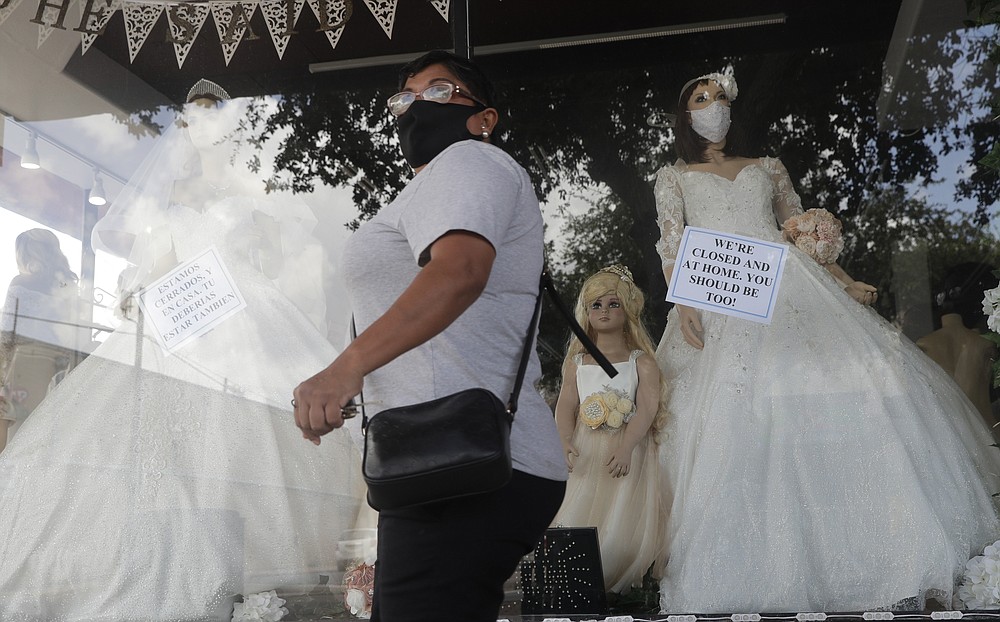 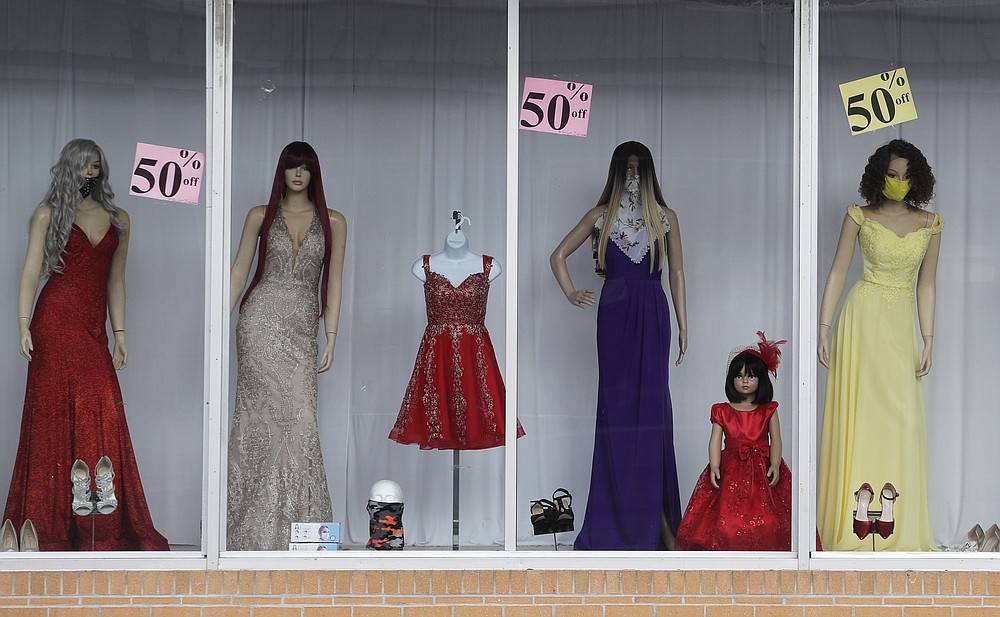 Sale signs are posted on a display window with mask covered mannequins at a dress shop, Thursday, July 30, 2020, in McAllen,Texas. (AP Photo/Eric Gay) 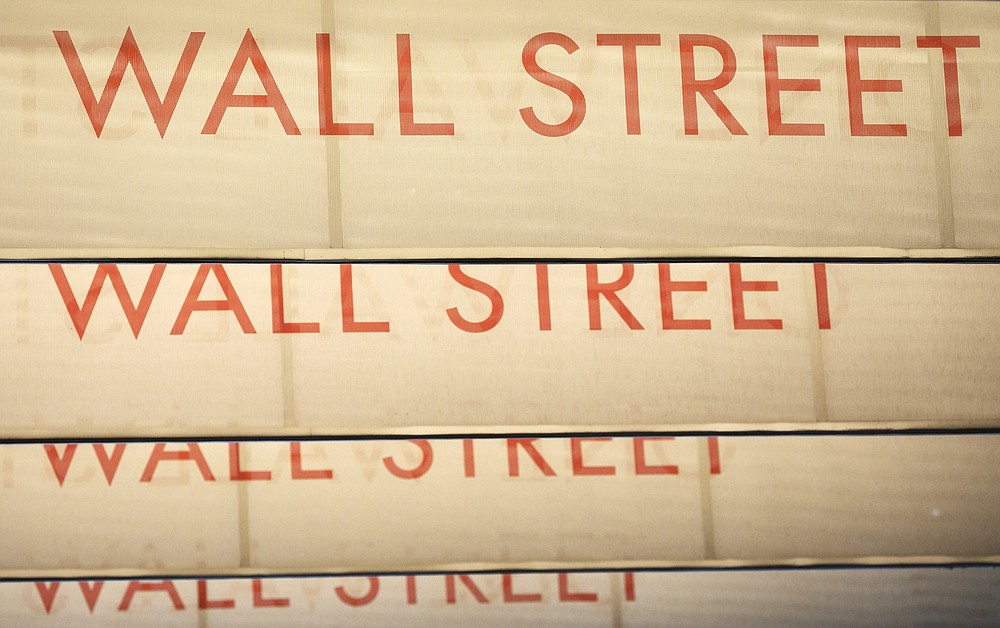 Signs for Wall Street are shown, Thursday, July 30, 2020, in New York. Stocks are falling on Wall Street Thursday after reports showed that layoffs are continuing at a stubborn pace and that the U.S. economy contracted at a nearly 33% annual rate in the spring. (AP Photo/Mark Lennihan)