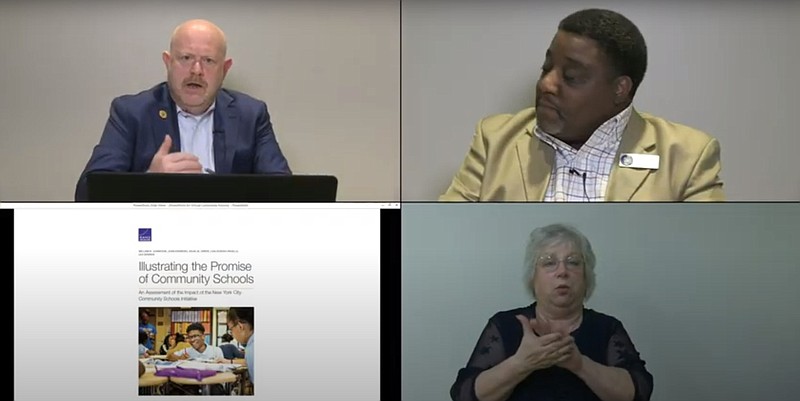 City and Little Rock School District officials want to implement a model of community-based education that offers a centralized location for services in a neighborhood and case management for individual students.

At the second of two virtual town-hall-style meetings Thursday evening, Jay Barth, the city's chief education officer, and Darian Smith, the district's executive director of elementary education, fielded questions about the details of a community schools plan the city and district are working on.

Officials plan to spend the first half of the 2020-21 school year performing needs assessments at the four schools it chooses as its flagship class of community schools, which it will select in the coming weeks, Barth said. The plan is to focus on elementary schools initially and eventually expand the program as funds allow.

The district will hire four community school coordinators to connect students and their families with support services. The application period closed at midnight. Smith said Thursday evening that the district had received more than 30 applications for the positions, which have a salary range of $27,492 to $48,480 for an 11-month contract.

In response to questions from the virtual town hall's viewers, Barth said he anticipates many more volunteers going into schools as part of the program, and that involving some Pulaski County Special School District locations in the program in the future could be a possibility.

Asked by a viewer about what outcomes the district hopes to see from the community schools approach, Smith said he wants to see that it promotes student achievement, positive conditions for learning, and a safe and supportive environment.

Barth said there is a lot of evidence that community schools work and said the most expansive research has been done on the community school approach in New York City. He cited a Rand Corp. study from earlier this year which showed that community schools or those using a similar approach were successful in lowering absenteeism and disciplinary infractions, even if they didn't immediately bring up test scores.

City and district staff members have visited two other school districts to observe how other locations have implemented community schools: Caddo Parish in the Shreveport area, and Albuquerque, N.M.

In Caddo Parish, Barth said that while all students in a school have a baseline of services, about 10% of students are given case managers to give them the attention and services they need.

Smith said that approach seemed to have success with individual students. He related a story about a visit he'd had with a high schooler in that district who wasn't going to school until a site coordinator reached out to him.

"The student shared with us that he felt secure and safe in school," Smith said. "This was a kid who was almost 20 years old who had fallen through the cracks."

In Albuquerque, Smith said, schools were more of a center in the lives of students and their families than they were in Caddo Parish, offering a mentoring program, cooking and dance classes, legal services for families, and more on site.

According to information provided by the New Mexico district, Albuquerque schools provided more than $3.5 million worth of services during the 2019-20 school year and counted 117,122 contacts with students and families, which includes event attendance, volunteer engagement, participation in adult education programs, council meetings, and various support services and out-of-school learning opportunities being provided.

Still, Barth said officials had lingering concerns that students would continue to fall through the cracks if Little Rock schools created community hubs without implementing a case management approach, which is why they are looking to take a hybrid approach.