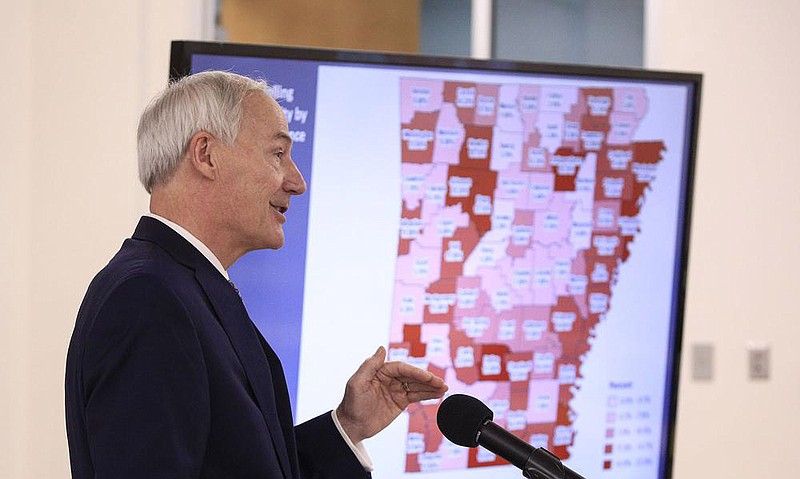 Gov. Asa Hutchinson, holding his briefing Wednesday at Arkansas Tech University in Russellville, was noncommittal about opening public schools. “You probably should ask me that question maybe a week out,” he said. More photos at arkansasonline.com/730governor/. (Arkansas Democrat-Gazette/Staton Breidenthal)

Gov. Asa Hutchinson said Wednesday that the White House assured him in a conversation the day before that covid-19 testing across the nation will ramp up significantly by next month, delivering faster results to get ahead of the virus.

Hutchinson, who held his near-daily news conference in Russellville, did not give specifics, saying only that the extra assistance was related to supply chains and support of the six commercial labs processing tests across the nation.

According to the governor, 4,519 tests for the state were performed in the previous 24 hours, raising the total administered for July to 175,155. The governor had set a goal of 200,000 tests for July; with two days to go, the goal was unlikely to be met.

The testing rates are down significantly from months past because commercial labs are backed up around the nation because of a lack of supplies and reagents.

"Part of it could be, if people realize it's going to take a long time to get it, it discourages them from going and getting the tests," Hutchinson said. "We've got to turn that around nationally."

The number of coronavirus cases rose by 787 in the previous 24 hours, for a total of 40,968 cases since the pandemic began in March, Hutchinson said.

State Epidemiologist Jennifer Dillaha said there are 6,596 active cases, counting 342 in correctional facilities, 80 in nursing homes and 6,174 in the general population.

Correctional facilities were the sites of 170 of the new cases, while 617 were in the general community.

The state's covid-19 death toll rose by six to 434 with hospitalizations rising by seven to 508 and the number of those on a ventilator decreasing by two to 108.

[Video not showing up above? Click here to watch » https://www.youtube.com/watch?v=Id2a23ihu4U]

The latest Department of Health report on the coronavirus in state nursing homes shows that 1,194 residents and 880 health care workers have tested positive for the for the virus since it hit the state in March.

Of that total, 158 nursing-home and other long-term care facility residents as well as one staff member have died of covid-19.

The counties with the highest numbers of new cases included Chicot County, which is home to a state prison, with 145; Pulaski with 82; Sebastian with 43; Benton with 33; Little River with 30; Craighead with 24; Mississippi with 22; and Washington with 22.

The Delta Regional Unit, a state prison in rural Chicot County, is the latest Department of Corrections facility to experience a large-scale outbreak of the virus, according to officials who said more than 100 prisoners at the facility have tested positive.

More than 3,700 prisoners across the state already have tested positive for the virus, though few facilities have seen initial cases grow as rapidly as they have at the Delta Regional Unit, which had no publicly reported cases on Tuesday. Officials said Wednesday that they were having difficulties determining the size of the outbreak.

Cindy Murphy, a spokeswoman for the Department of Corrections, said late Wednesday that the prison agency was notified that 90 prisoners tested positive, though that was several hours after Hutchinson put the number at 145.

[Interactive Arkansas map not showing up above? Click here to see it: arkansasonline.com/arvirus]Murphy later said that the prison system's numbers were updated to show 157 positive inmates at the Delta Regional Unit.

The issue had to do in part with how prisoners' coronavirus tests are processed, Murphy said. The tests are taken by Wellpath, the agency's health care provider, and the samples sent to the Health Department for processing. Results are then delivered back to Wellpath, Murphy said, though she added that officials were working to set up a system where the Department of Corrections can access live results.

"We know this is not acceptable," Murphy said. "We're frustrated by this also."

The state's prison system has struggled to keep other outbreaks of the virus under control even after identifying infected inmates and placing them under quarantine. Arkansas has had a higher rate of its prisoners test positive for the virus than any other state, according to data collected by the Marshall Project, a nonprofit news outlet that covers criminal-justice issues.

Asked Wednesday about the Marshall Project report, Hutchinson suggested that Arkansas has identified a higher number of infected inmates than other states because of more robust testing. That assertion, however, is not backed by other data published by the Marshall Project.

"I think part of the reason for that is we have a much more comprehensive response when we have one positive test in the prison system," Hutchinson said. "We will be testing maybe 1,000 inmates because they are in the same general pod or facility as one positive case."

Arkansas has conducted 8,583 tests on inmates housed in state prisons, officials said last week. While the Marshall Project has not published testing data on several other states near the top of its rankings -- such as Tennessee, New Jersey and Delaware -- its data shows that Arkansas leads states such as Ohio in the rate of prison testing, while trailing other states, such as Texas and Michigan.

At the Delta Unit, the first inmate tested positive for the virus on Monday, Murphy said, prompting staff members to test all 558 people at the unit. The Department of Corrections began receiving those results Wednesday and starting moving inmates into quarantine, she said.

Wellpath is going to return to the unit on Monday to retest inmates who tested negative this week, Murphy added.

When asked his decision to open public schools considering the delay in getting test results, Hutchinson was noncommittal.

The opening of schools is more than three weeks away, he said.

"You probably should ask me that question maybe a week out," the governor said.

School are set to reconvene starting the week of Aug. 24 with mask and social distance requirements. Hutchinson said testing for the virus in high schools is being developed.

The 200 point-of-care antigen test machines that were recently purchased by the state may be put to use in the high schools, the governor said.

The antigen tests, which are not considered to have the same level of accuracy as the PCR tests normally used, take only minutes to detect coronavirus proteins.

If a school district experiences an outbreak, the district will work directly with the Health Department to determine the level of response needed, Hutchinson said, whether it's taking "one to two days so we can do some cleaning" or a more strenuous response.

The governor announced that Verizon will join AT&T and T-Mobile in contracting with the state to provide Wi-Fi devices that will be distributed to school districts from the state Department of Education.

The state will use about $10 million from funds provided under the federal Coronavirus Aid, Relief, and Economic Security Act to purchase about 20,000 of the devices to deliver to families so that students can have 24 months of unlimited data for home internet access.

Hutchinson said that when it comes to making future decisions "whether it's sports or school," there will continue to be a unity of opinion with his advisers. 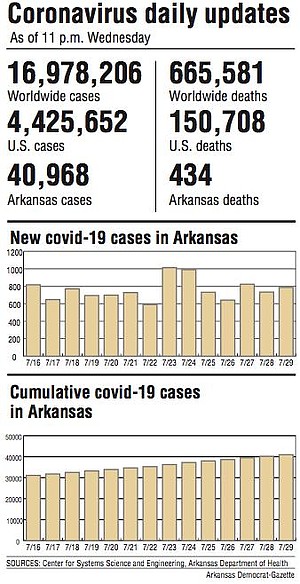