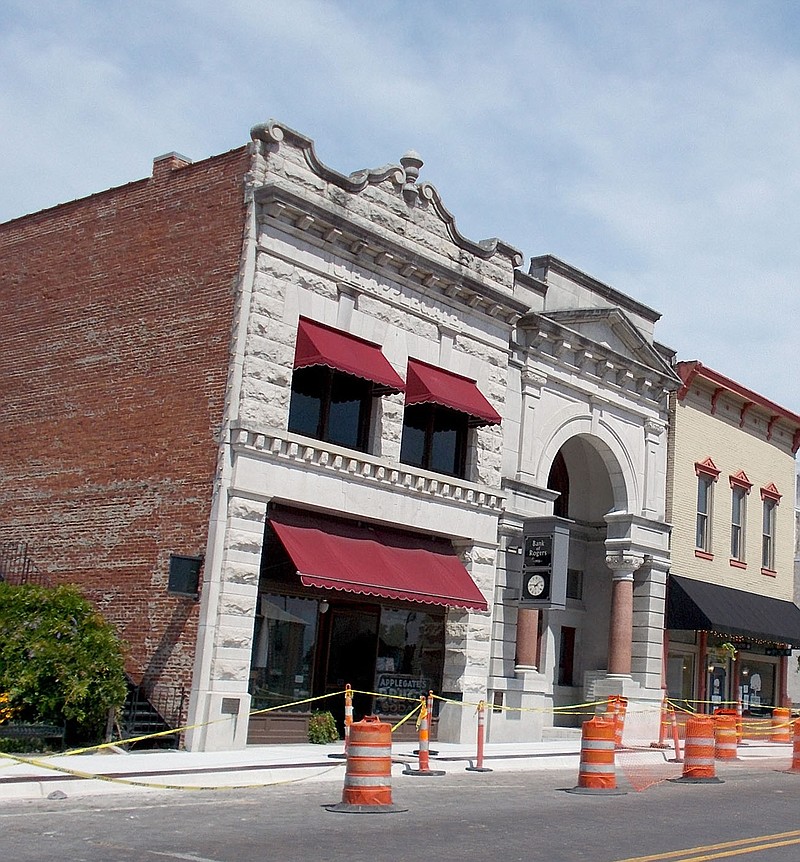 Construction of the Railyard Park is under way in downtown Rogers, but the Applegate Drug Store and Bank of Rogers buildings are original and just as beautiful as when built in 1907. (Courtesy Photo/James Hales)

William Hope "Coin" Harvey, the founder of Monte Ne, made his most important contribution to Rogers and Northwest Arkansas when he brought a noted architect from St. Louis to Rogers in 1904 to design his grand hotels and businesses. A.O. Clarke had his office at 116B W. Walnut St. in the Stroud building -- now occupied by John Mack and JKJ Architects -- and designed several of the hotels, banks and other buildings at the resort before it failed. Clarke liked the area so well that he decided to stay and went on to design many of the major buildings in the region from 1904 until his death in 1935.

Clarke made such an impact on the area that I thought it would be interesting to review a few of the prominent buildings that he designed. Many of these historic structures are still in use.

W.R. Felker established the Bank of Rogers in 1883 -- just two years after Rogers was founded -- in the back of Wash Williams' grocery store. In 1887, the bank expanded and occupied part of the Commercial Hotel at the corner of First and Elm streets. The bank thrived, and Felker had the area's leading architect, A.O. Clarke, design a beautiful new bank at 114 S. First St. In 1905, John Mylar hauled the cornerstone for the Bank of Rogers out of the hollow where Lake Atalanta is now located. The exterior featured a limestone facade with red granite columns beneath a Romanesque arch. This structure was unique in many ways, but it featured a new concept for businesses in Rogers -- an indoor bathroom. Felker had his name and the dates 1883 and 1905 carved into the limestone facade -- the date that the bank was established and the date the new building was begun. At some point, the name and dates were removed. Except for this minor change, the building is as beautiful today as when it was built. Unfortunately, just seven years later, during the depression of 1914, the bank closed, and many local citizens lost their life savings.

One of the most notable upstairs tenants was KAMO Radio Station, there from 1954-1970.

In 1975 the building became the first home of the Rogers Historical Museum until 1980, then served as the offices for KFAA-51 television between 1987 and 1995. Perry Butcher and Associates called the building home in the late 1990s, and the Daisy Airgun Museum was there from 2000 until 2004. From November 2004 until 2010, the first floor was the home of the Rabbit's Lair. Today, six suites on the second floor are occupied, but the bottom floor is vacant and awaiting the next chapter in the life of this impressive building.

Next door to the Bank of Rogers building is Applegate's Drug Store. Both buildings were designed by A.O. Clarke and built at the same time by the same builder, John Mylar. J.E. Applegate's Drug Store for many years was considered the "showplace" of Rogers. This historic building and its contents are without a doubt the best preserved in Rogers. All of the fixtures in the store today are original. They are solid mahogany and originally cost $2,192. The original tile floor was laid by local craftsman John Mylar. The brickwork was done by the Matthew brothers. The original marble soda fountain was made in Boston, Mass.

J.E. Applegate, his son, Charles, and grandson, John, operated the store from 1907 until 1964. "I have such fond memories. I started working there before I could reach the soda fountain pumps. I'd sweep and take out the trash for $1.25 a week. There wasn't much to spend money on -- the picture show only cost a dime -- so I could make $1.25 and still save money," John Applegate told the Rogers Historical Museum.

In 1964, John sold the business, but not the building, to John Lewis, who operated as Lewis Drugs for 22 years. The building was put on the National Register of Historic Places in 1982.

In 1986, Steve and Betty Goodman bought the store and opened Poor Richard's Gifts & Confectionery and continued until they retired in 2005.

In 2007, Clarice Strode Moore bought the building and opened Poor Richard's Art, a gallery featuring local artists. All of the original interior and exterior were preserved.

Today, Moore still owns the building, and the business, The Gathering, features local products, books and gifts made locally and in Arkansas. At visit to The Gathering is a step back in time to see a drug store intact inside and out just like it was when built in 1907.

This building on the northeast corner of Walnut and First streets was built in 1907 for Rogers Wholesale Grocery. The exterior was red pressed brick, with limestone headers, and the interior featured two large pyramid-shaped industrial skylights. The building was designed to allow the merchandise to be unloaded from train cars on the east side and transferred to wagons on the loading dock on the west side of the building. Several prominent citizens were connected with Rogers Wholesale Grocery including Ed C. Baker, the first manager; Lockwood Searcy; and Z.L. Reagan. Reagan became the manager in 1917 for many years and was the father of the famous Reagan sisters -- educators Agnes Litton, Mary Sue, and Betty Lynn. Rogers Wholesale Grocery was there until 1934, when it became Griffin Wholesale Grocery. Before the days of the big chain groceries, there was a mom and pop grocery on every corner and in every nook and cranny of the area. Rogers Wholesale -- and later Griffin's -- supplied merchandise to these stores. Griffin's was a chain based in Muskogee, Okla., and is still in business today. Griffin's closed in 1966, ending the building's era as a wholesale grocery business.

In 1976, Jack Parker renovated the building and opened Dollar Saver, a variety store. Jack and his sons, Bruce and Brent Parker, operated the Dollar Saver for 40 years until it closed in 2015.

Today the historic 30,000-square-foot, three-story building is called "The 1907" and is the home office of the Onyx Coffee Lab, where owners Andrea and Jon Allen roast, grind and brew the coffee on site. Other businesses in "The 1907" include The Heirloom at the 1907, New American Restaurant; The Foreman, a cocktail bar; Yeyo's, a mezcaleria and taqueria; and DoughP, a bakery. Also there are 11 one-bedroom luxury apartments in the north part of the building.

Several businesses in these buildings designed by A.O. Clarke and built at the turn of the century are crippled today by the coronavirus pandemic, but hopefully all will return to normal business soon and thrive in these beautiful, historic settings. There are many more buildings designed by Clarke, and I hope to write about them in a future column.

James F. Hales is an author and local historian. His column appears monthly. Email him at [email protected]