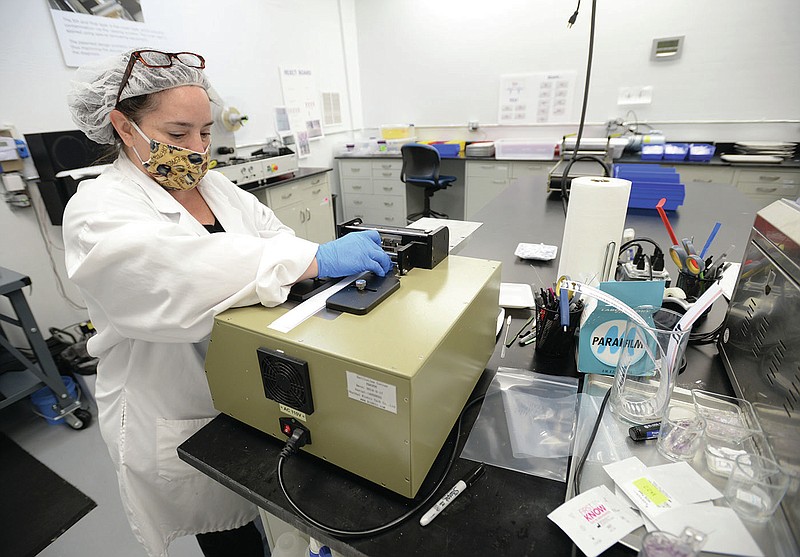 Gabriella Miller, manufacturing team leader, works at NOWDiagnostics in Springdale in June. The company has earned European Union approval for its single-drop test for the covid-19 antibody. (NWA Democrat-Gazette/Andy Shupe)

Springdale-based NOWDiagnostics Inc. has gained European Union approval for its single-drop test for the covid-19 antibody.

The company said Tuesday it obtained approval for the test's use in moderate/complex laboratory settings in 28 European Union countries. The test was submitted for approval in mid-June.

The tests using a single drop of blood are self-contained and take from 10 to 15 minutes to give results. NOWDiagnostics offers a variety of tests, including pregnancy tests and tests that show indications of a heart attack.

C19 Development, LLC, a subsidiary of NOWDiagnostics, will offer the test for use in clinics to hospital emergency rooms in the EU, while the company moves forward with clinical trials of the antibody test for point-of-care and over-the-counter use.

Since early February, the team at NOWDiagnostics has been working on its new antibody test for covid-19. It submitted its product for FDA Emergency Use Authorization in late May.

Kevin Clark, chief executive officer of NOWDiagnostics said in an interview Tuesday that the company is eagerly awaiting approval for its covid-19 antibody test in the U.S. and he's hopeful the EU approval will help speed things along. He said the company is hiring additional staff at its Springdale facility to manufacture the tests destined for the European market.

The end result, he said, is to obtain approval for NOWDiagnostics' test for in-home use in Europe and the United States.

In a blog post earlier this year, Dr. Anand Shah, deputy commissioner for medical and scientific affairs at the FDA, and Dr. Jeff Shuren, director of the center for devices and radiological health at the FDA, said high-quality antibody tests help understand a person's and a population's exposure to covid-19.

According to the Centers for Disease Control and Prevention, as of Tuesday there had been more than 4.3 million cases of covid-19 diagnosed in the U.S., with nearly 55,000 added that day and more than 148,800 total deaths attributed to the disease. According to John Hopkins University and Medicine coronavirus resource center on Tuesday there were more than 16.5 million confirmed cases of covid-19 worldwide with more than 657,000 deaths attributed to the disease.

In an earlier interview, Clark said plans are to scale up production in Springdale of NOWDiagnostics' tests, going from 50 workers to between 100 and 125. He said with the scale-up, the company will be able to produce between 600,000 and 800,000 tests a month, and with additional mechanization eventually 2.2 million tests a month.

The company has more than 60 patents granted or pending on its various technologies and offers early pregnancy tests in the U.S. and Europe, as well as three tests that can help diagnose a heart attack and three toxicology tests underway in Europe.

NOWDiagnostics was founded in 2013 and opened its 22,000-square-foot manufacturing operation in 2014 in Springdale.