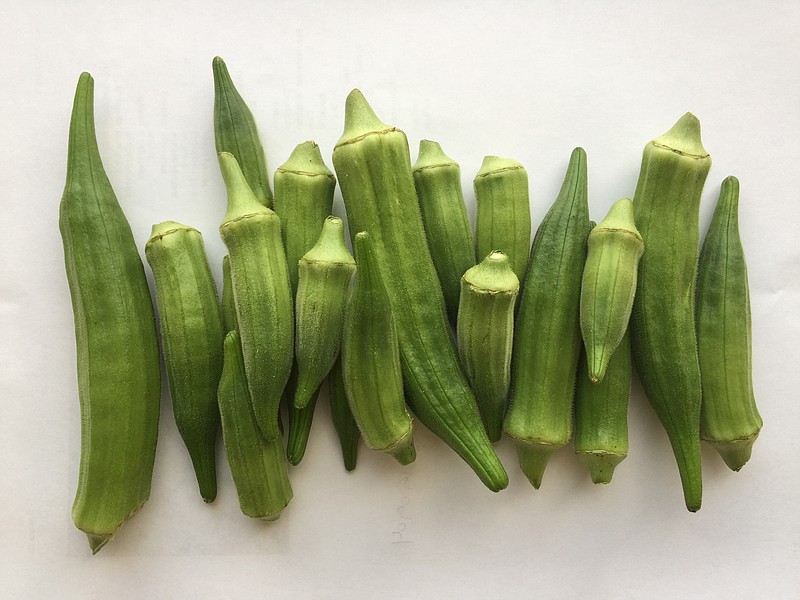 Recipes that appear in Idea Alley have not been tested by the Arkansas Democrat-Gazette.

We've reached what I think of as high summer — with June and July (almost) behind us, and the long hot and hotter days of August ahead. August always feels to me to be the longest month, even if it is the same as July.

Unlike me, numerous Arkansas crops thrive in this steamy heat. One, in particular, is okra, which leads me to the theme of this week's column.

"I'd previously asked for home-style Hispanic recipes a few months ago (but sadly no one responded), so I thought I'd contribute this recipe since okra is in season now. I haven't ever tried it with frozen okra since slicing it would be a little problematic," Trish writes.

In a medium bowl combine all the dry ingredients; set aside.

Add egg mixture to dry ingredients and stir until moistened. Fold in the okra and onions, scraping bottom of bowl to make sure batter and okra are well-incorporated. Mixture will be thick.

Using a heavy 12-inch skillet, heat 1 inch of vegetable oil until shimmering. Drop okra mixture by tablespoonfuls into hot oil and fry until nicely browned; surface will start looking a little dry. Turn carefully and brown the other side. Set on a wire rack to drain or on a paper-towel-lined plate.

Here's another okra recipe Kats might find interesting. I saved it from The Washington Post and it has been in my "to-make" pile for quite some time. Alas, I have not yet tried it, but I'd hate for it to founder another year in that ever-growing pile.

Slice off the very tops of the tomatoes at the stem end, and remove the cores. Grate the tomatoes (cut sides) on the large-holed side of a box grater seated in a mixing bowl. Discard the skins.

Heat the oil in a large, deep-sided saute pan over medium heat. Whisk in the flour until smooth; whisk constantly for 5 to 7 minutes, to form a roux that begins to smell nutty and picks up a little color.

Add the onion and cook for 4 or 5 minutes, stirring occasionally, until bits begin to lightly brown.

Add the tomatoes, the salt and pepper, stirring thoroughly to incorporate the tomatoes into the roux. Once the mixture begins to bubble at the edges, reduce the heat to medium and cook for 5 minutes, stirring occasionally to prevent scorching. The gravy should be thick enough to flow from a ladle, but not so thin that it spreads across an entire plate. If the gravy seems too thick, add up to ½ cup water, a few tablespoons at a time.

Stir in the okra; reduce the heat to medium-low and cook for 4 to 5 minutes, until it becomes just tender. Taste, and season with more salt and/or pepper, as needed. Serve warm over biscuits or cornbread, rice or grits.