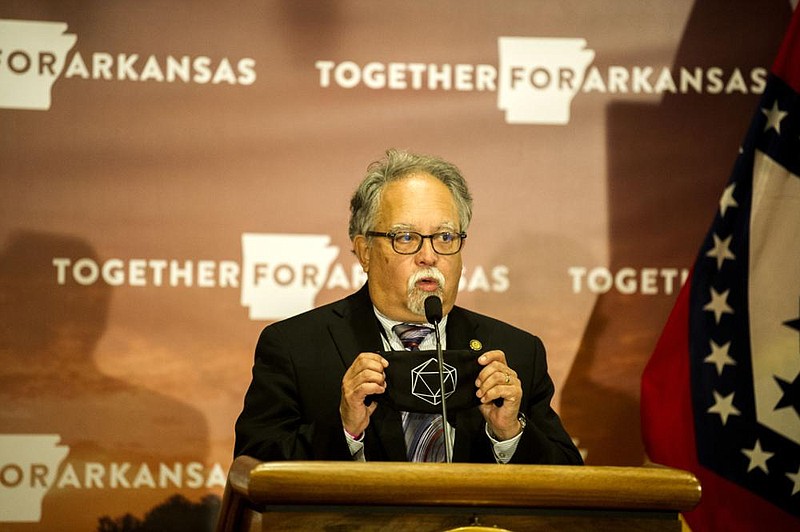 Dr. Jose Romero, Interim Secretary of the Department of Health, emphasizes the importance of wearing a mask as he addresses the media during Governor Hutchinson's daily press conference on Arkansas' response to COVID-19 on Friday, July 24, 2020. (Arkansas Democrat-Gazette / Stephen Swofford) - Photo by Stephen Swofford

Arkansas' interim health secretary privately expressed concerns in June that continuing to lift restrictions on businesses statewide could lead to an increase in covid-19 cases, potentially overwhelming the health care system, according to email records.

Gov. Asa Hutchinson at the time ultimately chose to pursue the broadest approach to reopening the state's economy from several options under consideration by health officials.

In an email, Dr. Jose Romero, whom Hutchinson recently appointed to serve as interim secretary of the Arkansas Department of Health, said moving to Phase 2 across the state risked accelerating the outbreak and overloading hospitals.

Romero wrote June 9 to department chief Dr. Nate Smith in response to a request for feedback on the state's reopening strategy.

"I am concerned that pushing on to Phase 2 for the entire state will lead [to] significant increases in COVID cases that will overwhelm our healthcare systems," Romero wrote. "The public seems not to have taken seriously recommendations for social distancing and masks."

On June 10, one day after Romero's message to Smith urging caution, Hutchinson announced that the entire state would transition to Phase 2.

"The conclusion is that the state is best served moving together, even though we have various regions with a current spike in cases," Hutchinson said.

In his email, Romero was responding to a list of options Smith sent June 8 to officials with the governor's Medical Advisory Committee for Post-Peak Covid-19 Response, asking for their input on which reopening strategy the state should pursue, according to records obtained under the state Freedom of Information law.

During the initial months of the pandemic, Hutchinson had made reference to the White House's "Guidelines for Opening Up America Again" as a potential blueprint for lifting restrictions. Hutchinson and the Health Department began moving to lift restrictions on businesses in early May under the governor's Phase 1 timeline.

The single-page document from Smith, titled "Considerations for a Regional Approach to Reopening," noted that covid-19 cases were rising in every region of the state except the southeast, with the most rapid spread happening in Northwest Arkansas.

The document also said two assumptions -- that there would be a single peak of infections and that reopening nonessential businesses risked a resurgence of cases -- had not been borne out.

"In fact, states that reopened prior to meeting gating criteria have not had worse outcomes than those that waited," the document stated.

Romero and other members of the post-peak committee were presented with the following five options:

• Keep waiting until Arkansas met the gating criteria for Phase 2 (requiring 14 days of a downward trend in new cases or the test positivity rate).

• Enter Phase 2 only in the southeast region.

• Enter Phase 2 in the southeast, central and northeast regions while "continuing to observe northwest and southwest regions until their new cases and hospitalizations plateau or take a downward trend."

• Enter Phase 2 statewide except in Benton, Washington and Sevier counties.

• Abandon the "Opening Up America Again" blueprint and enter Phase 2 as a state.

In his emailed response, Romero wrote, "I am vacillating between options 4 and 5." He pointed out the northwest region of Arkansas as an area of concern.

After commenting on the possibility of increasing covid-19 cases, Romero added, "I think of all the options offered I would support #4. If I felt that the public was more serious about this illness I would have gone for number 5. I believe we need to continue to focus on protecting the most vulnerable in our society."

He continued, "The question that I have and perhaps you have insight into the answer is: Will the Governor be willing to backtrack if we have a major surge in cases leading to a shortage of ICU beds and ventilators?"

"Will he be willing to be more forceful in his recommendations for social distancing and masking? I would feel better about my decision know[ing] that this is not a one way path," Romero concluded.

When asked Tuesday during a media briefing about his June 9 message and whether the governor made a mistake by transitioning to Phase 2 for the whole state, Romero said his comments were based on "current data at the time."

"No, I do not think the governor made a mistake in going forward," Romero said. "And he has continuously increased his support for masks, as has been shown from this podium, to the point of issuing a mandate when the public did not seem to be taking this issue seriously."

After voicing resistance to the idea for weeks, the governor ordered Arkansans statewide to wear masks as of July 20 in most public settings where social distancing of 6 feet or more is not feasible.

During Tuesday's briefing, Romero called the mask mandate "essential to bringing this under control."

"It seemed that, to me, the public was not taking this issue seriously despite having multiple recommendations by the governor to engage in using a mask," Romero said.

He said Hutchinson is monitoring the situation closely along with the Health Department.

Romero, the chief of the pediatric infectious disease section at Arkansas Children's hospital and a professor of pediatrics at the University of Arkansas for Medical Sciences, has served as chief medical officer of the Arkansas Department of Health since April.

He was tapped May 26 by Hutchinson to serve as interim secretary of health. The current health secretary, Smith, will depart for a job at the Centers for Disease Control and Prevention at the end of August.

Over the summer, Arkansas and other states in the South and West have experienced surging numbers of covid-19 infections.

Another Health Department official, Dr. Jennifer Dillaha, responded to Smith's request for feedback on Phase 2 by pointing out that by resuming many activities, from her perspective, the state had "already abandoned" the White House blueprint.

"According to that document, we are already in Phase Two with resumption of youth activities such as camps and sports, reopening of bars, and resumption of individual non-essential travel," Dillaha replied in a June 8 email, records show.

"We are in Phase Three for the directives for indoor and outdoor venues that allow more than 50 people, and we are preparing to allow visits to senior care facilities to resume next month, which is also in Phase Three. So I really don't know that the term 'Phase 2' applies anymore or how we are defining it at this point," she wrote.

Dillaha, the state epidemiologist, said her main concern was maintaining hospital capacity. As a result, she recommended mitigation strategies in communities with either high rates of covid-19 cases or hospitalizations to curb viral spread in workplaces, schools and social settings.

"So I think this means I support option #5," the move to Phase 2 statewide, "which is what we are already doing -- except that we will need to redefine what Phase 2 means," Dillaha wrote.

Smith made the case for moving to Phase 2 when asked about it by at least one Health Department official, records show.

Namvar Zohoori, the department's deputy state health officer and chief science officer, emailed Smith on June 10 to ask if there was anything specific he should convey to the health policy board of the Arkansas Center for Health Improvement before the group's meeting.

Zohoori told Smith that he expected members to have questions about why the state was moving to Phase 2 after viewing the governor's announcement that day.

Smith replied that Hutchinson "laid out the argument pretty clearly."

"Without a reasonable anticipation of harm, I cannot justify continuing to curtail their economic activity. As the Governor noted, we are already at least halfway into phase 2 (and into phase 3 for some activities), so this is not a very radicle [sic] move," Smith added.