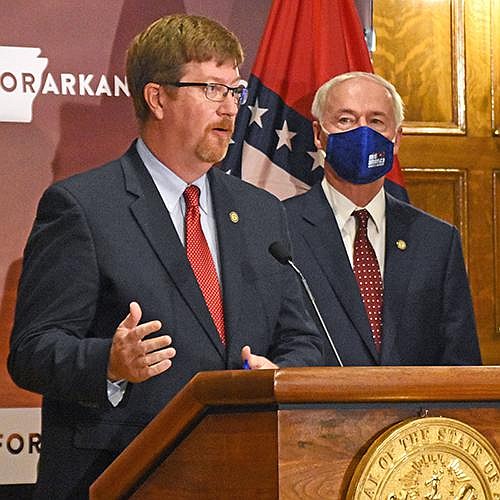 Arkansas will spend $10 million in federal aid to purchase Wi-Fi-access devices for families with school-age children, Gov. Asa Hutchinson announced Monday as the state's total number of active covid-19 cases grew slightly, about a month before the start of school.

The announcement comes about a week after a group of Arkansas pediatricians wrote a letter to the governor expressing their concern about the safety of returning to in-class instruction. Some school districts are already planning remote-learning options.

After previously pushing the start of the school year back more than a week, Hutchinson has since been steadfast in declaring that schools will open in Arkansas on Aug. 24 at the earliest, despite the state's struggles to decrease the number of coronavirus infections.

On Monday, the Arkansas Department of Health said it had identified 824 new cases of the virus over the previous 24 hours, bringing the total number of Arkansans who have tested positive for the virus since March 11 to 39,437. Of those, 6,674 were considered active cases, up 74 from the previous day.

[Video not showing up above? Click here to watch » https://www.youtube.com/watch?v=3ev3_cOXBQI]

The number of deaths attributed to the virus rose by seven to 408, while hospitalizations grew by nine, reaching 489.

There were 110 covid-19 patients on ventilators Monday, an increase of seven from the previous day.

The governor also announced that the Legislative Council will meet today to discuss several funding items rejected at its regular meeting Friday. Those include $16 million to pay for additional contact tracing, which is used to determine who has been exposed to an infected person; and $7 million to support testing, contact tracing and case coordination of Hispanic and Marshallese populations in Northwest Arkansas and four other counties.

Using money that the state received from the Coronavirus Aid, Relief, and Economic Security Act, Hutchinson said school districts will be able to purchase about 20,000 Wi-Fi devices to deliver to families so that students can have home internet access.

The devices will be provided to families based on need, with 24 months of unlimited data, the governor said.

"They take them home, they'll be able to utilize that access in their home environment so they won't have to sit around the bus or go to McDonald's or some other place to do their homework," the governor said.

The units will connect to cellular networks, which the governor said would cause gaps in internet access in areas with poor cell coverage.

"Part of our planning process entails providing for off-site instruction, and that has been our challenge, particularly in the rural setting," said Superintendent Sally Bennett of the Rivercrest School District in Northeast Arkansas.

"The digital divide is real, and it is deep," she added. "We have equipped buses with access points, we have talked to our providers, we have extended Wi-Fi access to our parking lots but what has been announced today is monumental."

Both AT&T and T-Mobile have contracted with the state to provide the Wi-Fi devices, which will be distributed to school districts from the Arkansas Department of Education based on enrollment, according to the governor's office. School districts can purchase additional devices from those providers for the same rates the state has agreed to pay.

Johnny Key, the state's education secretary, said his office will release a memo to school districts today with more details on how to acquire the devices.

Arkansas' Alcoholic Beverage Control Division informed the organizers of an annual music festival in Fort Smith on Monday that they will be fined for failing to maintain Health Department directives, after a number of attendees were seen not wearing masks or socially distancing.

Scott Hardin, a spokesman for the agency, said it sent five agents to the sixth annual Peacemaker Festival in Fort Smith on Friday and Saturday nights. The agents reported the violations, Hardin said, adding that there were not enough volunteers and staff members at the festival to properly enforce the guidelines with the size of the crowd.

Hutchinson addressed the issue of the music festival at his briefing Monday, saying that state officials had approved a plan for the concert to be held within the guidelines, but that the plan had not been followed properly.

"I know the sponsors worked hard but the ball was dropped at some points through that concert and we need to do better on that," Hutchinson said.

The festival was held at the Riverfront Amphitheater in downtown Fort Smith. The event, according to the mission statement on its website, is a music festival "by music lovers, for music lovers," that blends, "the best Country, Rock, Blues, Red Dirt and Americana acts touring today."

The Health Department will continue to keep an eye out for covid-19 cases related to the festival, spokeswoman Meg Mirivel said.

The organizers of the Peacemaker Festival did not return requests for comment made via telephone and email late Monday afternoon.

The Health Department has ordered 200 covid-19 testing machines from Becton, Dickson and Co. as the agency seeks to beef up its internal capacity for testing, the governor announced Monday.

Dr. Jose Romero, Hutchinson's interim secretary of health, said the machines produce results that "can be read in a matter of minutes."

A spokeswoman for the Health Department, Danyelle McNeill, said the department's $200,345 order includes the 200 testing machines along with enough kits to process 3,600 tests.

"We're still working on the plan to allocate those and the use of those but when we have an opportunity to expand our testing capacity, we wanted to seize that moment," the governor said.

The governor has attributed a decline in overall coronavirus testing of Arkansans to fewer tests being done by commercial labs, which process the bulk of tests in the state, according to Health Department data.

The Health Department and Hutchinson set a July goal of conducting 200,000 coronavirus tests, though the state has since lagged behind that goal. Romero said Monday that he believed the state would finish the month with more than 180,000 tests completed.