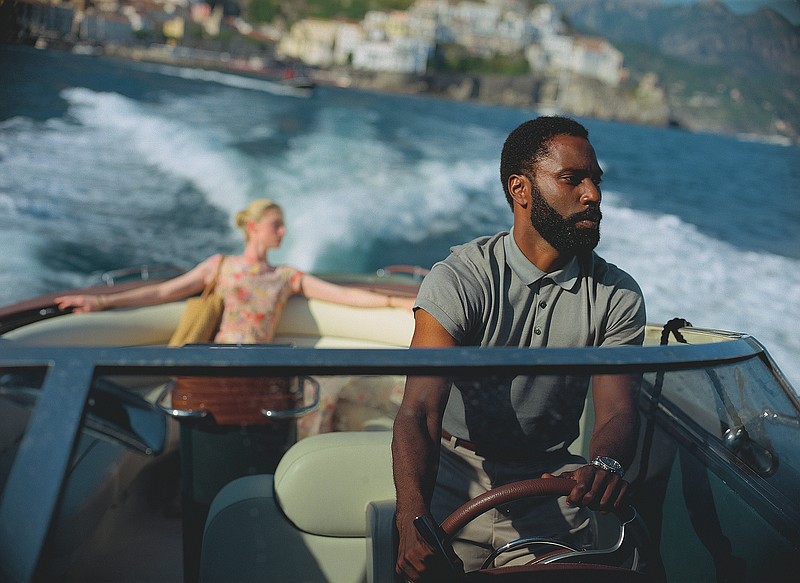 This image released by Warner Bros. Entertainment shows Elizabeth Debicki, left, and John David Washington in a scene from "Tenet." The film, which had hoped to herald Hollywood’s return to big theatrical releases, has yet again postponed its release due to the ongoing coronavirus pandemic. Warner Bros. said Monday that “Tenet” will not make its August 12 release date. And unlike previous delays, the studio this time didn’t announce a new target for the release of Nolan’s much-anticipated $200 million thriller. (Melinda Sue Gordon/Warner Bros. Entertainment via AP)

NEW YORK -- A long time ago in a pre-covid universe far, far away, blockbusters opened around the globe simultaneously or nearly so.

In 1975, "Jaws" set the blueprint. Concentrate marketing. Open wide. Pack them in.

Since then, Hollywood has turned opening weekends into an all-out assault. Staggered rollouts still happen, of course, but the biggest films are dropped like carpet bombs. Anything less risks losing the attention of moviegoers. Global debuts north of $300 million became commonplace. Last year, "Avengers: Endgame" made well north of $1 billion in a couple days.

Hollywood has now gone more than four months without a major theatrical release. While some films have found new streaming homes, the biggest upcoming ones -- "Tenet," "Mulan," "A Quiet Place Part II" -- remain idled like jumbo jets on the tarmac. The leading chains are still shuttered. Recent coronavirus spikes have forced release dates to shuffle and chains to postpone reopening to August.

Now, movie houses say that despite far from ideal circumstances, it's time for new movies. Four months of near zero revenue has brought the $50 billion annual business to its knees. While the beleaguered restaurant industry still has takeout and airlines continue to operate with masked flyers, the vast majority of U.S. movie theaters haven't punched a single ticket since March. Some have turned to selling popcorn curbside.

"The problem is, we need their movies," says John Fithian, president and chief executive of National Association of Theater Owners. "Distributors who want to play movies theatrically, they can't wait until 100% of markets are allowed open because that's not going to happen until there's a vaccine widely available in the world."

"The old distribution models of big blockbusters," adds Fithian, "need to be rethought."

That may mean returning to a more old-fashioned release pattern, opening films overseas first and, in the U.S., opening at different times in different areas. When Warner Bros. earlier this week announced it was delaying the release of Christopher Nolan's "Tenet" because of the rise in cases, Warner Bros. Pictures Group chairman Toby Emmerich said the studio is "not treating 'Tenet' like a traditional global day-and-date release."

The coronavirus crisis has ushered in new chapter in the often symbiotic, occasionally quarrelsome relationship between distributors and exhibitors. Splitting ticket sale revenue approximately in half, their fortunes have often been closely linked.

The largest studios -- the Walt Disney Co., Warner Bros., Universal -- now all have streaming services of their own now, along with television operations. So they have options. The on-demand release of "Trolls" caused a rift between Universal and AMC. But the two halves of theatrical moviegoing have worked largely in concert through the pandemic thus far.

It's in their own self-interest. Studios have been loath to sacrifice billions in box office for their priciest and most popular releases. On Thursday, John Stankey, chief executive of Warner Bros. parent company AT&T said direct release to HBO Max could be option for some Warner Bros. movies but not the $200 million "Tenet."

With distancing protocols and other measures, cinemas have reopened in parts of Europe, the Middle East and South Korea, where last weekend Yeon Sang-ho's "Train to Busan" action sequel "Peninsula" debuted with $13.2 million. Theaters in China, the world's second largest movie market, this week reopened with theaters limited to 30% capacity.

North America, usually the main event of a blockbuster release, may have to learn to follow the rest of the world.

Despite the virus surge in much of the U.S., exhibitors believe they can operate relatively safely by adhering to health officials, decreasing theater capacity and cleaning in between showings. After initially flip-flopping, AMC will require patrons to wear masks. AMC, the world's largest circuit, on Thursday delayed its reopening from the end of July to mid-to-late August, a timing that it said reflects the expected new release dates for "Tenet" and Disney's "Mulan," now slated for Aug. 21.

Some moviegoers, naturally, don't anticipate going, regardless of what comes out. Jeffrey Shaman, an epidemiologist at Columbia University, isn't planning to go to the movies this year.

"It seems prudent to think that indoors is where the lion share of transmission takes place," says Shaman. "You could think: well, it's a movie theater. If you space people out, it's a big room, tall ceilings. If they get the ventilation cranked up, it's actually not the most concentrated environment. It's not liked a packed bar with a low ceiling. It's probably not as dangerous as that scenario. But is it more dangerous than sitting home and watching Netflix? Yes, of course it is."

But imperfect may be all cinemas and studios have for now. Fithian believes 75% of U.S. theaters could be open within days if they had new movies. (Those currently open are mainly playing older films.) Theaters are closed in California and have yet to reopen in New York despite the state's relative success in combating the virus. That removes the two top cities in ticket sales, Los Angeles and New York.

"The longer this goes, there will be bankruptcy filings and reorganizations and there will be people who go out of business," says Fithian who's currently lobbying for greater Congressional support for theaters. "But if there are no new movies until that's a vaccine, that's a dire situation for a lot of companies."

AMC recently raised $300 million in debt relief to help itself remain solvent. Throughout the industry, some 150,000 workers remain furloughed.

Jonathan Kuntz, a film historian and professor at the University of California, Los Angeles, says "Tenet" "was made for a world that no longer exists."

But as much as the familiar kind of worldwide launch is now impossible, the downside of improvising might not be as bad as it seems -- provided piracy isn't widespread. There will be scant competition. "Tenet" can take up most screens. Its opening can be spread out through the week. Advertising will be cheaper. Audiences will have little to distract them.

"They're going to have to be very inventive and very nimble to squeeze what they can out of this movie and maybe set a pattern for this kind of covid theatrical universe we're moving into," says Kuntz. "If they don't do something, if they just keeping holding the films back, the theaters are going to die. Then everything's going to just be streaming and we'll have lost something a lot of people -- not just Christopher Nolan -- treasure." 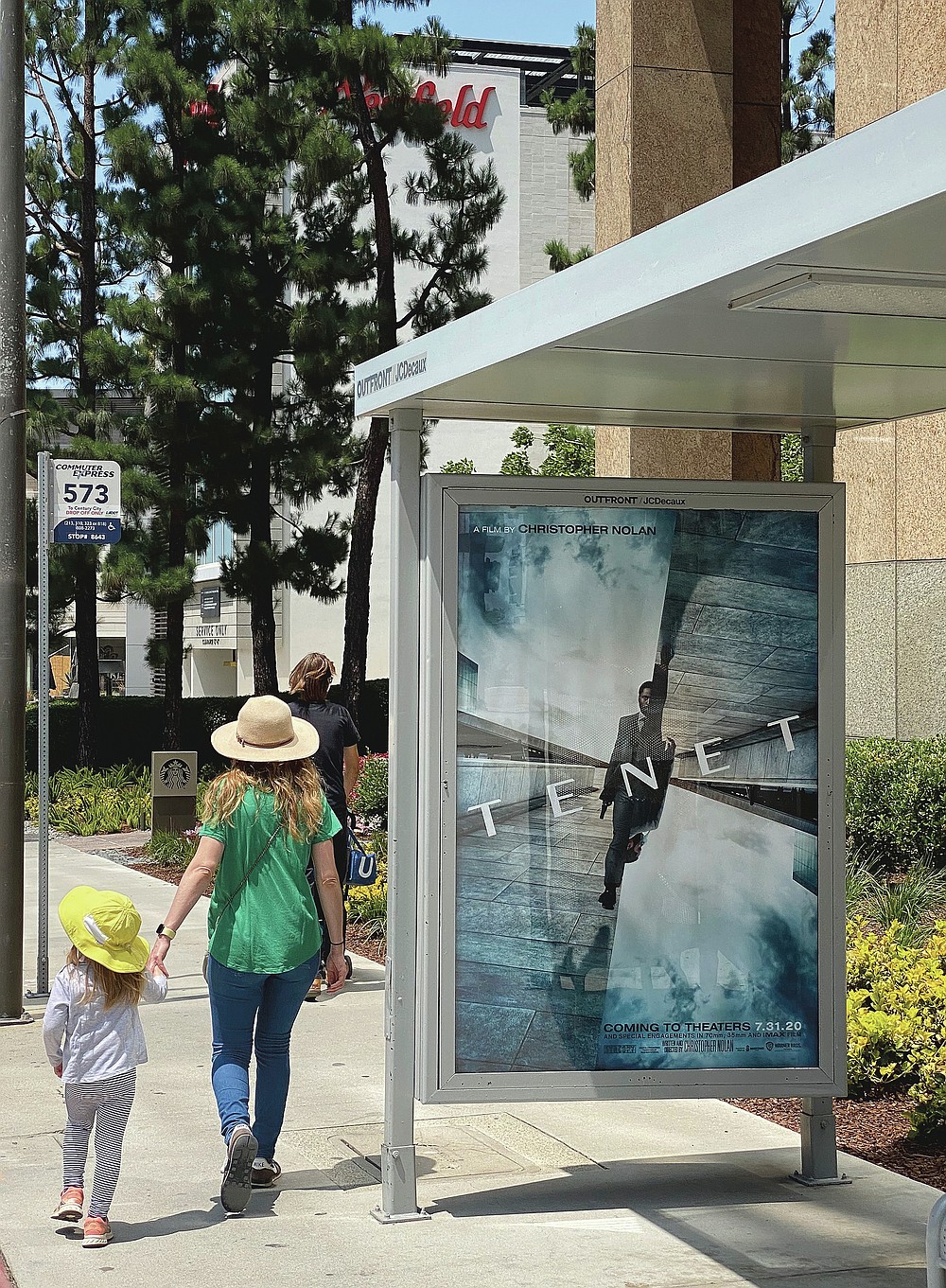 In this June 27, 2020 photo, people walk by a poster promoting the long-awaited Christopher Nolan film "Tenet," in Los Angeles. The film, which had hoped to herald Hollywood’s return to big theatrical releases, has yet again postponed its release due to the ongoing coronavirus pandemic. Warner Bros. said Monday, July 20, that “Tenet” will not make its August 12 release date. And unlike previous delays, the studio this time didn’t announce a new target for the release of Nolan’s much-anticipated $200 million thriller. (AP Photo/Anthony McCartney) 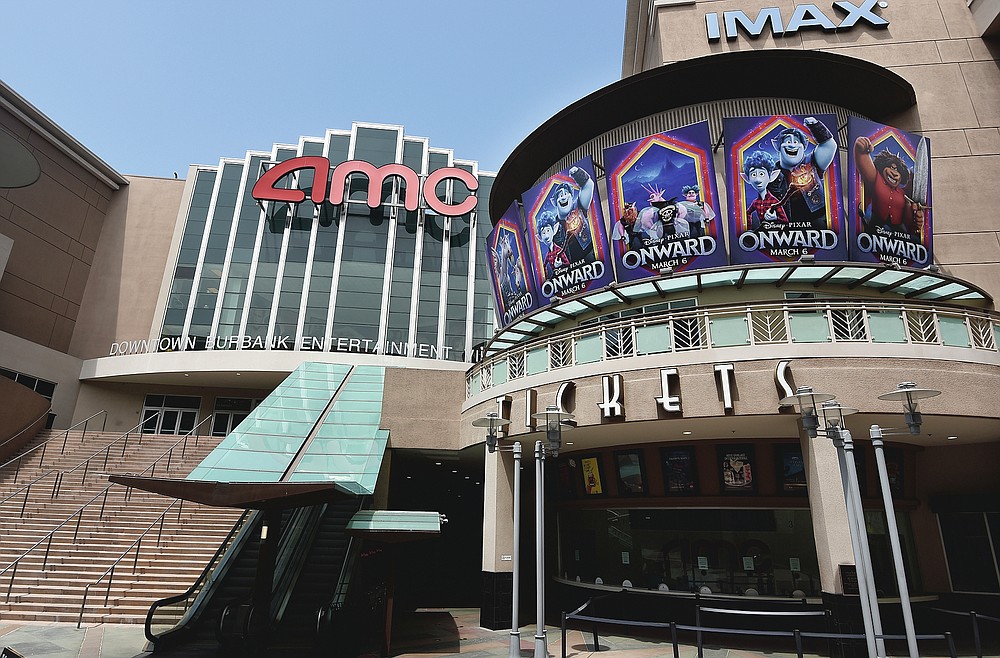 FILE - The currently closed AMC Burbank 16 movie theatres complex is pictured on April 29, 2020, in Burbank, Calif. After several false starts, the film industry is hoping to bring new releases back into movie theaters in late August. But for blockbusters, it may mean rethinking opening weekend and returning to a more gradual rollout through international and U.S. territories. Gone for now are the days of massive global openings. And theater owners say if they don't get new films soon, they may not make it to 2021. (AP Photo/Chris Pizzello, File) 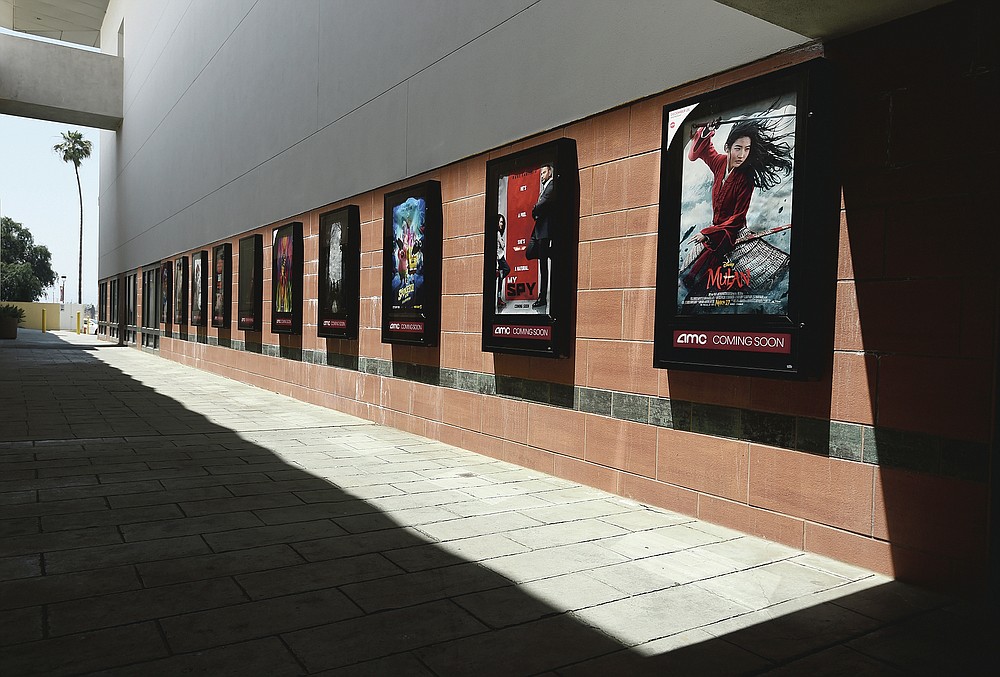 FILE - Posters for upcoming movies are displayed in an empty corridor at the currently closed AMC Burbank Town Center 8 movie theaters complex on April 29, 2020, in Burbank, Calif. After several false starts, the film industry is hoping to bring new releases back into movie theaters in late August. But for blockbusters, it may mean rethinking opening weekend and returning to a more gradual rollout through international and U.S. territories. Gone for now are the days of massive global openings. And theater owners say if they don't get new films soon, they may not make it to 2021. (AP Photo/Chris Pizzello, File)