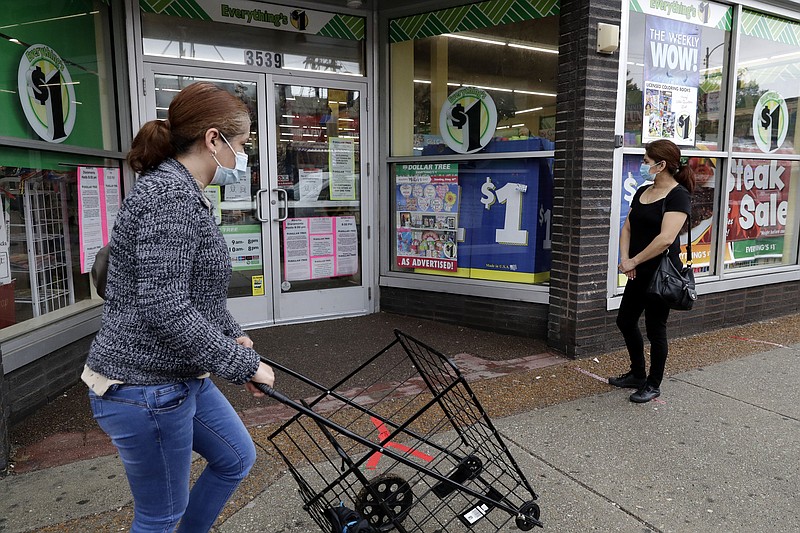 FILE - In this Friday, May 15, 2020, file photo, a woman wearing a mask, left, walks by a Dollar Tree, while another woman waits in line to shop at the store, which is limiting customers amid the coronavirus pandemic, in Chicago. (AP Photo/Nam Y. Huh, File)

WASHINGTON -- Nearly 3,000 federal workers have filed compensation claims for having contracted the coronavirus on the job, a number that is expected to double by early next month, according to a Department of Labor review.

Through mid-June, families of 48 federal workers had filed death claims with the Division of Federal Employees' Compensation.

The report reflects only the number of federal workers or their families who filed claims by June 16 -- not the number who actually have contracted the coronavirus or died from it. Reports from individual agencies indicate the numbers of infections and deaths are much higher.

But the report from the department's inspector general is one of the first centralized assessments of the way the virus is affecting federal workers, many of whom have continued to work on site through the pandemic.

The inspector general found that the Office of Workers' Compensation Programs was "experiencing or expecting delays and resource management issues as a result of increasing claims or social distancing mandates brought on by the pandemic."

The inspector general's audit found that as of June 16, the division had received 2,866 covid-19 claims, including 48 death claims, and paid out about $30,000 in medical benefits and compensation. It estimates that those totals will reach 6,000 claims by early August.

As of July 27, the Defense Department reported 5,373 virus cases among civilian employees, with 33 deaths. Veterans Affairs reported that 41 employees have died. Customs and Border Protection and the Transportation Security Administration, two of the largest subagencies under the Department of Homeland Security umbrella, reported a combined 2,905 infection cases among employees, with 14 deaths.

The government has designated occupations such as law enforcement, first responders, and front-line medical and public health personnel as inherently high-risk. Employees in those fields have to report only an infection to claim compensation. Federal employees in other fields are being asked to prove that they were infected in the course of their duties.

Joe Mansour, a workers compensation specialist with the American Federation of Government Employees, said the compensation process for infected workers has been erratic, with confusing instructions and mixed messages. He said he has fielded complaints from employees in positions considered high-risk who are still being asked to provide detailed doctor's explanations despite the promise of an expedited process.