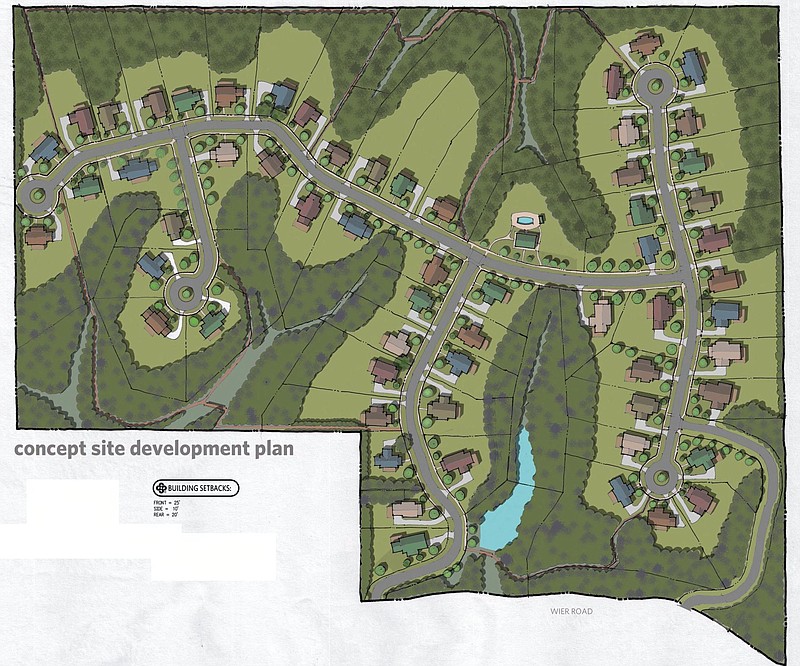 FAYETTEVILLE -- A proposed conservation subdivision narrowly passed the city's approval process and awaits approval from the county side.

Planning commissioners voted 5-4 Monday to approve a preliminary plan for Blackberry Ridge, a 60-lot subdivision on about 88 acres past the western city limits. The area sits north of Weir Road and west of Adams Road in the Wheeler township.

Because of a recent annexation the City Council approved, the southeast corner of the land fits in the city's planning area, which extends one mile past the city limits.

Both the city and Washington County planning bodies would have to approve the plan before the project could go to construction, said Jonathan Curth, the city's development review manager. The county's planning board tabled the item upon its review to get more information on drainage.

The portion of the land the city can regulate touches about a dozen of the 60 proposed lots and a block length of the proposed neighborhood roads for the site. The rest of the development is under the county's jurisdiction.

Tencleve said he hopes his family will be the first residents at Blackberry Ridge. He said he wanted to create the best of front porch and back porch living, meaning homes would sit close together but with trails interwoven and the rural landscape intact.

"We're trying to create a place where people, and in particular kids, can really get away from a screen and get out and explore nature," he said.

Nathan Nailling, an Adams Road resident, said he was generally supportive of the development, but worried about the increase in traffic 60 homes could bring.

"It's just inevitable that Adams Road will see a significant increase in traffic," Nailling said. "Right now, it's a very narrow, gravel road. It's already in need of improvements."

Tom Hennelly with Crafton Tull said the plan is to share the cost with the county to improve Weir Road.

Most of the commission's discussion had to do with the length in feet between proposed streets in a block within the city's jurisdiction. Matt Hoffman said he felt it was debatable whether the project could be considered a conservation development.

Commissioner Tom Brown asked the developers to follow up with a local conservation agency about preserving green space at the site.

The commission, by a 9-0 vote, rejected a request to rezone about 7 acres south of Wedington Drive, west of Broyles Avenue. The land would have changed from an agricultural use to a mostly residential development with small-scale commercial facing Wedington.