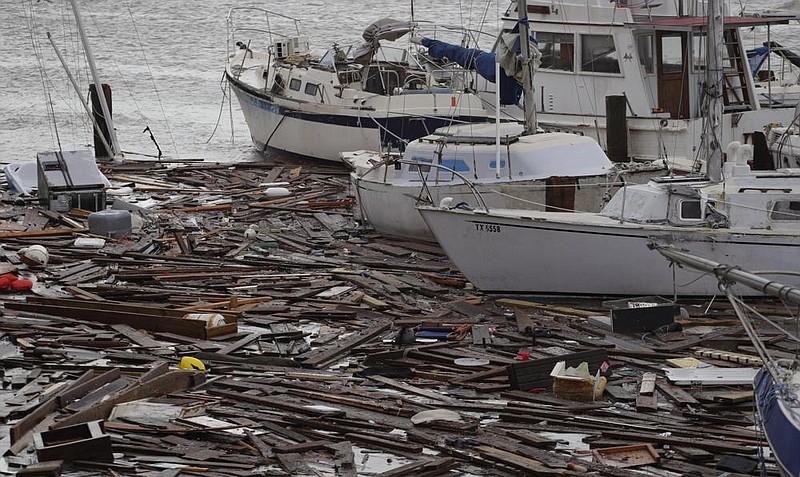 Debris floats around damaged boats in a marina Sunday after Hurricane Hanna hit Corpus Christi, Texas. About 30 boats were lost or damaged in the storm at the marina. More photos at arkansa- sonline.com/727hanna/ (AP/Eric Gay)

CORPUS CHRISTI, Texas -- A day after roaring ashore as a hurricane, Hanna lashed the Texas Gulf Coast on Sunday with high winds and drenching rains that destroyed boats, flooded streets and knocked out power across a region already reeling from a surge in coronavirus cases.

Downgraded to a tropical storm, Hanna passed over the U.S.-Mexico border with winds near 50 mph, the National Hurricane Center said. It unloaded more than 12 inches of rain on parts of South Texas and northeastern Mexico.

Border communities whose health care systems were already strained by covid-19 cases -- with some patients being airlifted to larger cities -- found themselves under siege from the first hurricane of the 2020 Atlantic season. There were no immediate reports of any deaths on either side of the border.

Dr. Ivan Melendez, the health authority in Hidalgo County, Texas, was treating a patient overnight at a hospital when he and a nurse noticed water streaming down a wall and pooling on the floor. It was flowing through a vent in the room, which had been retrofitted with a fan to create negative pressure and prevent the virus from spreading through the hospital.

After driving home in the storm in the middle of the night, Melendez was trapped in his home Sunday morning by downed trees and had no electricity. He used the phone to discuss whether to put a 58-year-old woman on a ventilator, a decision he felt uncomfortable making without seeing the patient in person.

"You look at the people's eyes," he said. "You'll know if they're in despair."

Another doctor decided to place the woman on the ventilator, he said later.

Henry Van De Putte, CEO of the Red Cross' Texas Gulf Coast chapter, said the organization would open more shelters with reduced capacity to ensure social distancing. Volunteers and people seeking refuge will undergo temperature checks, and a medical professional will be assigned to each location, he said.

A community building known as the Dome in Mercedes, Texas, was set aside for evacuees who had tested positive for covid-19 or were exposed to the virus. Across the region, shelters were also opened in hotels, schools and gyms.

Van De Putte emphasized that people should not delay seeking help because of the virus.

In the Mexican border city of Reynosa, a maternity hospital was damaged by heavy rain, and water had to be pumped out, authorities said. Some patients had to be moved to upper floors, and a few were evacuated to other hospitals, said Pedro Granados, director of civil protection for Tamaulipas state.

In the Mexican city of Matamoros, across from Brownsville, the rains shook tents in a refugee camp housing an estimated 1,300 asylum seekers, including newborns and elderly people, who have been waiting for months for court dates under a U.S. immigration policy informally known as Remain in Mexico.

Coastal states scrambled this spring to adjust emergency hurricane plans to account for the virus, and Hanna was the first big test. Gov. Greg Abbott said Saturday that some people in need of shelter would be given hotel rooms to keep them apart from others.

Hanna blew ashore as a Category 1 storm late Saturday afternoon with winds of 90 mph not far from Port Mansfield, which is about 130 miles south of Corpus Christi.

Myrle Tucker, 83, tried to ride out the storm in a powerboat docked in a Corpus Christi marina. But winds and rain blew out the vessel's windows. Eventually, rescuers in a dinghy were able to reach him and bring him to shore. Many other boats were flooded and lashed by the storm.

Tucker said he told his rescuers he wasn't sure he would be able to climb out of his boat.

"They picked me up," he said. "They carried me like a box of napkins."

Information for this article was contributed by Maria Verza and Desiree Seals of The Associated Press. 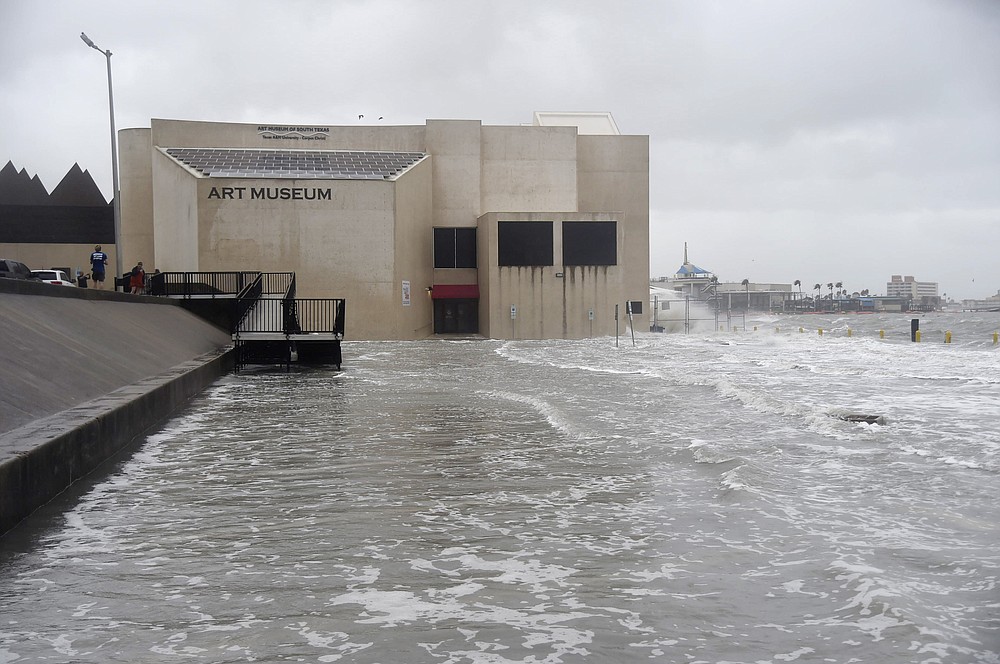 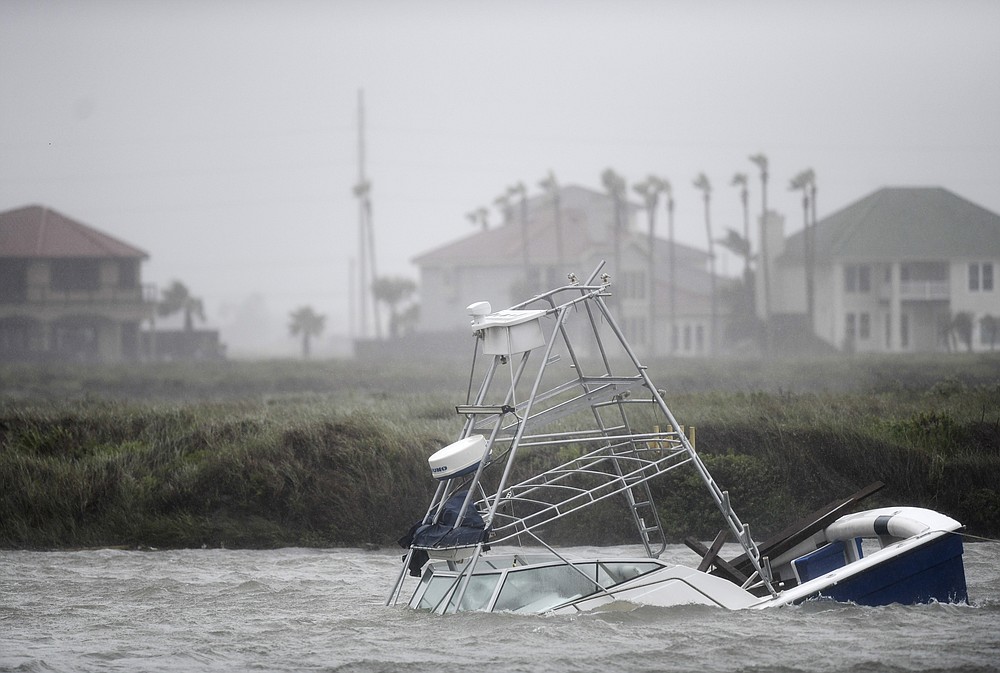 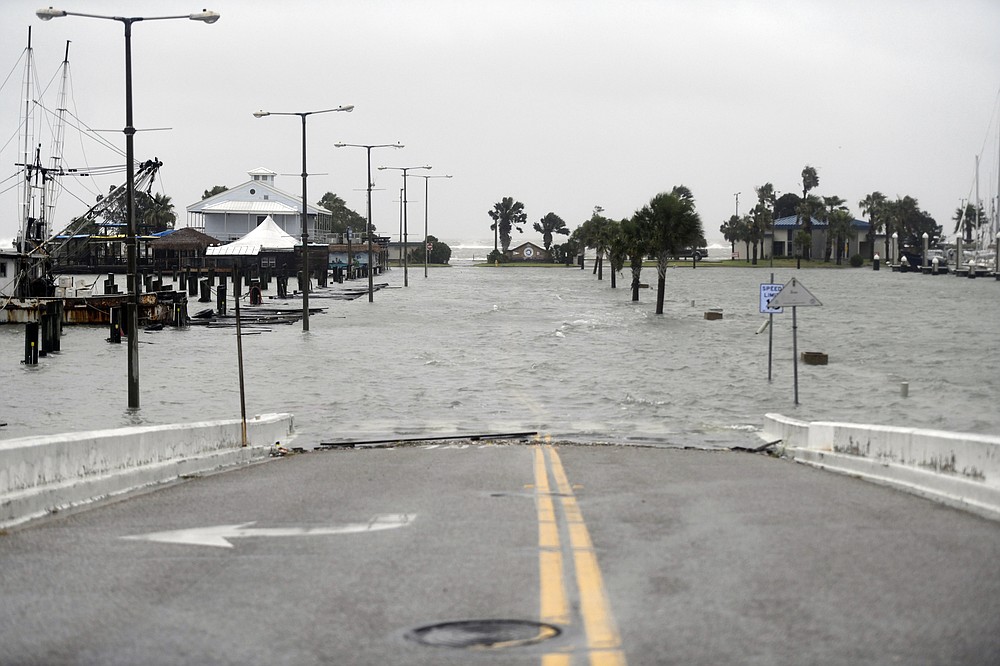 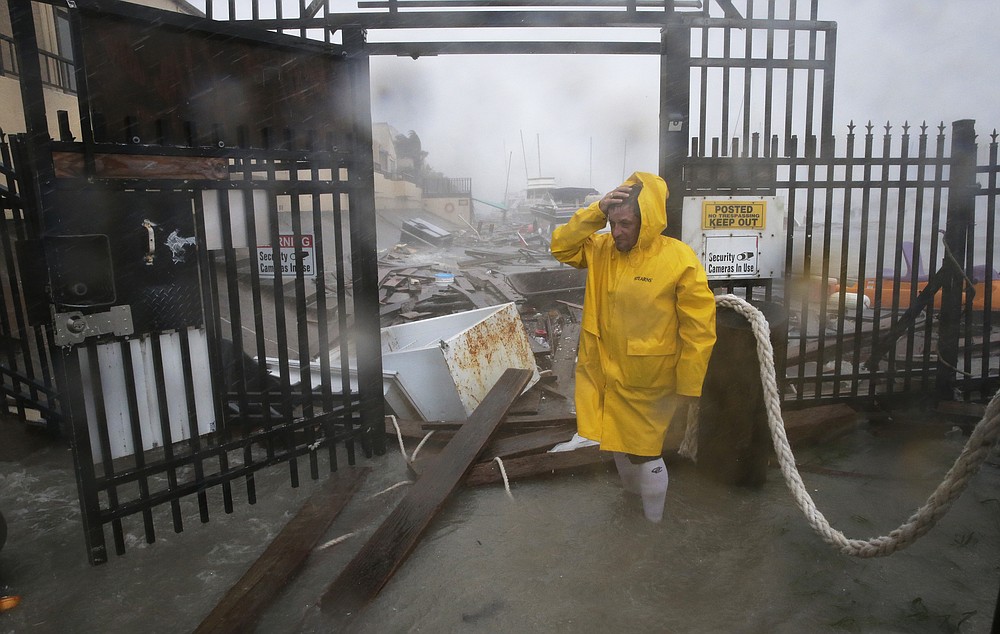 Jame Rowles examines the damage after the docks at the marina where his boat was secured were destroyed as Hurricane Hanna made landfall, Saturday, July 25, 2020, in Corpus Christi, Texas. (AP Photo/Eric Gay) 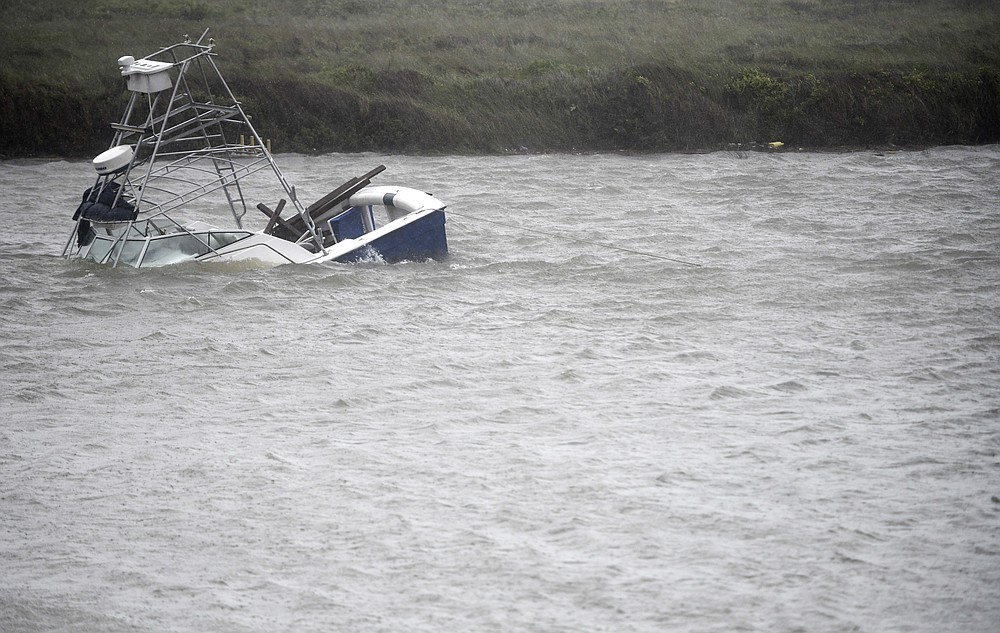 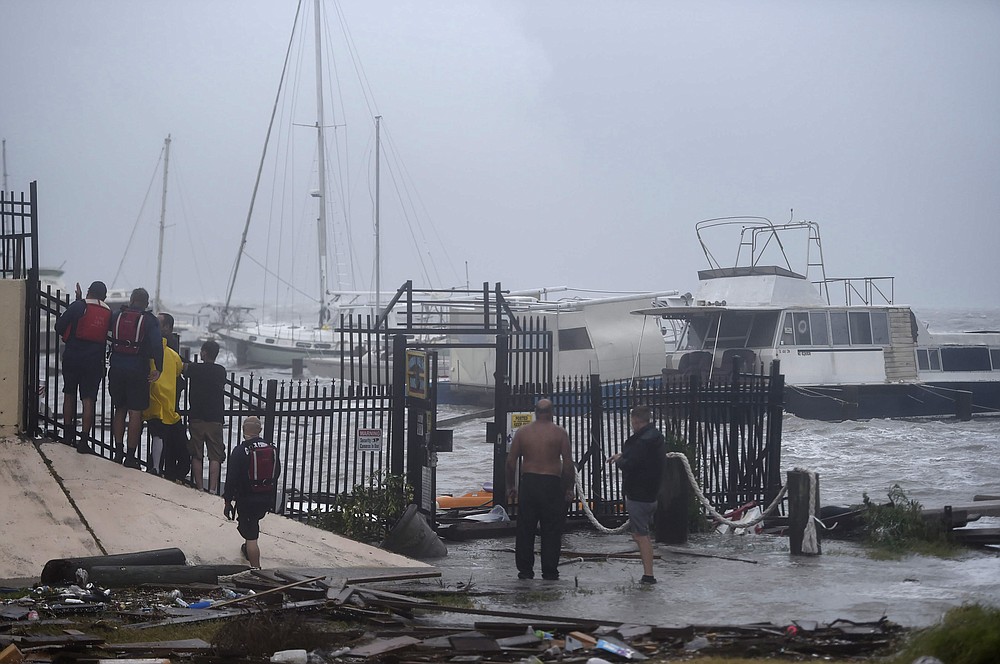 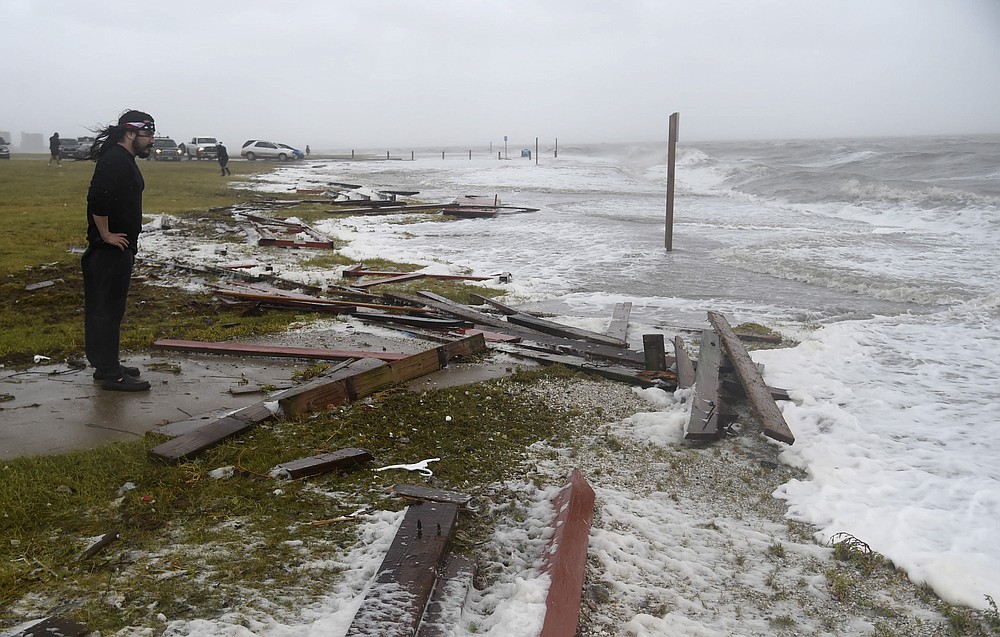 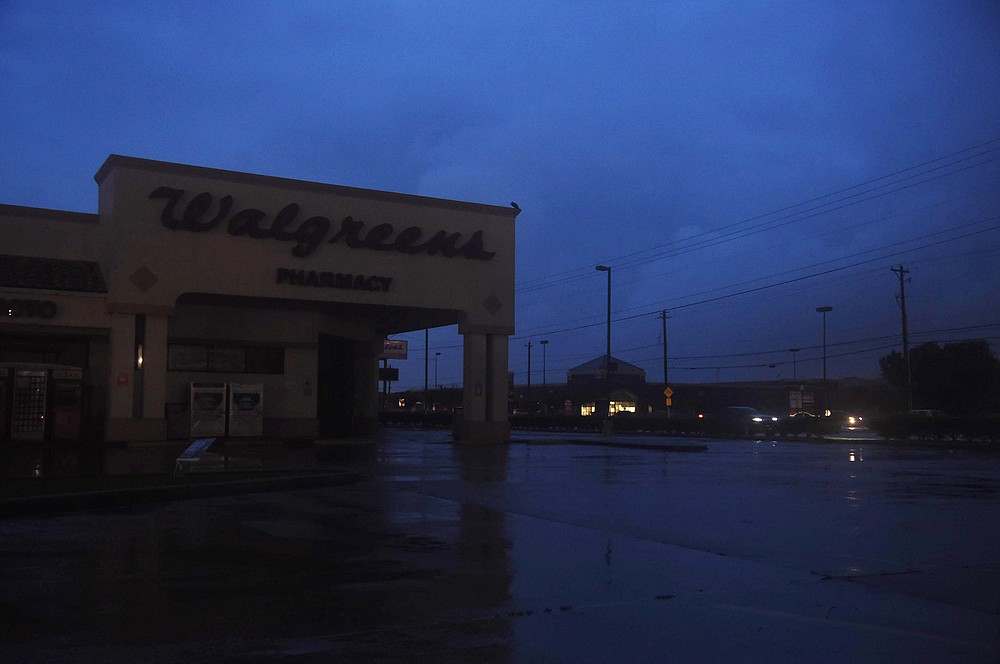 A darkened Walgreens is seen off of Saratoga and Staples during Hurricane Hanna, Saturday, July 25, 2020, in Corpus Christi, Texas. As of mid-Saturday, AEP Texas reports 16,564 power outages in Nueces County. (Annie Rice/Corpus Christi Caller-Times via AP)