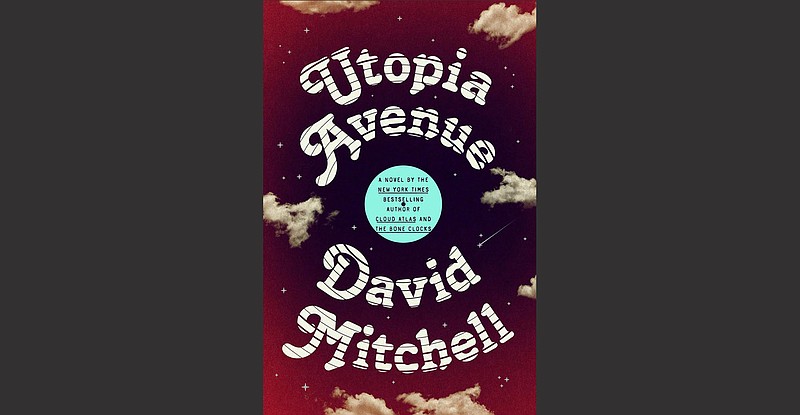 I know enough about David Mitchell's work to be wary of making any grand pronouncements about his latest, "Utopia Avenue" (Random House, $30). For all I know, it contains a lot of secret messages for those who've followed his work closely — he wrote "Cloud Atlas" and "The Bone Clocks" and I read a little bit of those novels before dismissing them without prejudice. (Mitchell, always preoccupied with time, might understand.)

Just because a book doesn't grab one's attention in the first five pages doesn't mean it's not worthy; sometimes it's just that the reader isn't ready. I started and stopped Jack Butler's "Living in Little Rock With Miss Little Rock" three times before I finally backed up, got a running start and hurled myself into it. I was glad I did. Barely a week goes by when I don't think about something from that novel.)

Anyway, my first impressions of "Utopia Avenue" are that it's a fun read for a particular type of nostalgist who likes to imagine the 1960s as an especially fertile time for rock and revolution. Love was about as free as it ever got then, and it was probably a gas to walk through (London's) SoHo in 1967. All you needed was a guitar and a floor to sleep on, a tab of acid and a dream. Right.

As has been widely reported, "Utopia Avenue" is the story of the rise and fall of a rock 'n' roll band cast by a Brian Epstein-style Canadian named Levon Frankland (who, as Mitchell partisans will immediately recognize, is in "The Bone Clocks") as a superstar group. The story begins, clearly and refreshingly enough, in January 1967 (we know this because the adventurer Donald Campbell, a name most Americans probably won't remember but is important to people in the U.K., has just died). A certain specificity is among this novel's strengths, though sometimes it's also a weakness.

Just as Dean Moss, a song-

writing singing bassist recently booted from his band Battleship Potemkin for artistic differences (objecting to some asinine lyrics) touches bottom in the street after being evicted from his flat for nonpayment, he seemingly by chance encounters Levon in the street.

And Levon has a plan. He knows Dean's work and offers him a place to stay and takes him to watch a band called Archie Kinnock's Blues Cadillac (which recalls real-life groups John Mayall's Bluesbreakers and Alexis Korner's Blues Incorporated). Levon covets and soon pirates away the group's drummer Griff ("a northern diamond in the rough. Anarchic, sweary, likes a drink" and, like Charlie Watts, has an affinity for jazz) and ethereal on-the-spectrum (though he's been misdiagnosed with schizophrenia) guitarist Jasper de Zoet (who Mitchell will immediately connect to his relative, the protagonist of Mitchell's 2010 novel "The Thousand Autumns of Jacob de Zoet").

Jasper, who lives off his Dutch East Indian legacy, is the band's virtuoso and seems meant to be the book's most intriguing character, though for someone who knows more about Mitchell's work through his reputation than deep reading, he struck me as a kind of fan service — the obligatory big hit played dutifully as an encore.

More intriguing is Elf, a character who might have been imported from the Coen Brothers' "Inside Llewyn Davis." Elf is a folkie who had some minor success as a solo act (in America, a Joan Baez manque named Wanda Virtue has had a hit with one of her songs) and has just recently split with her lover/artist partner in a folk duo.

Elf is the novelty girl in the boy band, contributing piano, organ and some claw-handed guitar, as well as a few songs that she sings. She's middle class, with a family she loves and, by Utopia Avenue standards, quite conventional.

In a little over a year, the group wobbles out, finds its feet, experiences success and has the kind of metaphorical plane crash that bookends a lot of pop careers.

One point of irritation is that everyone from Rick Wakeman and Sandy Denny to ("Laughing Gnome"-era) David Bowie and John Lennon to (a drugged-out) Syd Barret and Big Bill Broonzy (this cameo is kind of nice) to Frank Zappa shows up in this small world. Marc Bolan comes off as an idiot boor (he says, "I always tell girls: 'If you want to understand me, read "The Lord of the Rings" right now.' It's that simple"); Francis Bacon turns out to be the soul of common sense.

Still, if you're not expecting it to be more — and Mitchell's fans may well be expecting this — "Utopia Avenue" is a good, breezy read despite its sizable (529 pages) girth.

But if I could read only one novel about the '60s this year, it would be Hendrix College professor (and frequent Oxford American contributor) Tyrone Jaeger's recently published "Radio Eldorado" (Braddock Avenue Books, $19.95). We'll get to that one in this space soon.