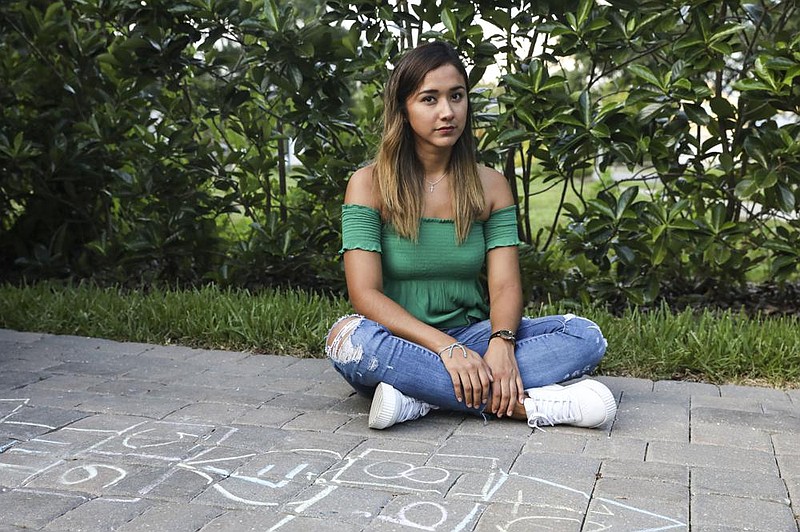 Valeria Rodriguez, who is from North Coahuila, Mexico, sits last month outside the home where she is an au pair for four children between the ages of 1 and 5 years in Tampa, Fla. Au pairs who came to work in the United States during the pandemic have had a scaled-back experience: personal travel has been considerably curtailed, as has socializing with other au pairs and locals, and they are spending much more time with their host families than they anticipated. (The New York Times/Eve Edelheit)

In early March, Ana Flavia, 23, traveled from her hometown, Sorocaba, Brazil, to Oakland, Calif. She was there to be an au pair to two girls, ages 6 and 11, and get a taste of the United States from living with them and their parents, a Chinese mother and a German father.

When Flavia agreed to the gig in January, she had grand plans. When the girls were in school she would explore San Francisco, basking in the Golden Gate Bridge and walking around the quirky neighborhoods. Weekends would be for bucket-list trips: hitting the Strip in Las Vegas and driving down California Route 1 to Los Angeles. "I would love to visit Hawaii, maybe Honolulu," she said. "I love views with beaches and mountains."

But the coronavirus pandemic was just around the bend. She arrived in Oakland one week before shelter-in-place orders took hold.

Flavia spent the first three months helping her young charges deal with the strange new world of learning online. "There are some things they can't do," she said. Now, with school out of session, it's about filling the days and coming up with activities to do around the house, since most of the city still isn't open. "Sometimes it's boring," she said. "Some days it's a roller coaster. We have good days and bad days."

Even when she's not working, she's stuck in the house. Rather than dining out, exploring all the great food in her area, she's spending every meal with her home parents, who are strict about healthy eating. "They don't use sauce and sugar," she said. "Sometimes I need sugar and salt."

Every year there are approximately 18,000 au pairs in the United States, mostly young women from across the globe looking for an opportunity to improve their English, make some money ($175-$200 per week, on average) and explore American cities and culture. Most au pairs have contracts arranged by agencies that stipulate how much they can work, usually 45 hours a week, so they have time to be free and go on adventures.

Those in America during the pandemic, however, have had a scaled-back experience. Personal travel has been considerably curtailed, as has socializing with other au pairs and locals. Au pairs are spending much more time with their host families than they anticipated. And they've gotten a crash course in national and state politics, sometimes muddling their views of Americans and the American dream.

"My Brazilian culture, every time we are together we hug and touch," Flavia said. "We have a stereotype of Americans as being colder. It seems true, but I can't tell if they are like this because of the coronavirus. I miss feeling warm with someone."

The pandemic has been particularly tough on new au pairs. They've had to adjust to their host families with little space.

Yilin Gu, who uses the name Erin with English speakers, is 26 and from Tongxiang, a city in the south of China near Shanghai. In March she moved in with a family in Dallas, with two boys, 5 and 2.

The house was crowded. The former au pair, also from China, was still living there because of travel restrictions. The youngest son kept asking for her instead of Gu, especially in the mornings.

There was also a live-in grandmother who loved to "chatter," Gu said. "When I'm taking care of the kids, she starts telling me the kids need to drink milk, milk, milk, and that those chicken nuggets aren't healthy."

Gu thought about returning to China, something friends were doing, especially because the pandemic is under better control there. But she decided against it. "I want to explore the cities and learn the culture and perfect my English," she said. "If I stopped my journey now, I would feel I didn't finish my purpose. I would have regret."

She moved into a hotel to await her next assignment, putting a profile up on her agency's website and interviewing with interested host families. "For me it's not weird being in a hotel alone," she said. "It's less stressful than being in a house." In early June she flew to New York to start her work with a new host family.

Later that month, President Donald Trump issued an executive order banning the J-1 visas that enable au pairs to live and work legally in the United States. Gu and others already here feel fortunate to already have secured their paperwork.

But some nearing the end of their term have felt frustrated about not getting to say goodbye to their friends in person or jet off on the kind of last-minute adventures that often serve as a punctuation mark to the experience.

Andrea Ibanez Granizo, 24, is from Madrid and has been working for a family in Marin County, outside San Francisco, for over two years.

Before her recent return to Spain, Granizo was scheduled to take what au pairs call "a travel month." "My host family pays for my food, my toiletries, everything I need," she said. "All my salary, I have saved for this." She was booked to go to Chicago, Dallas, Hawaii and Las Vegas. "It was saying goodbye to America in a big way," she said.

She especially needed this trip to change her perception of the United States, something the pandemic has eroded. "As a European and a Spaniard I came here with this idea of America that I saw in the Hollywood movies, that here everything is possible, everything is so good," she said. "Now with the pandemic, it's like, 'Oh, my God, they were not ready at all.'"

"Being an American really isn't an advantage anymore," she added. It doesn't help that her friends from Spain were texting her to jokingly check if she has taken her daily dose of bleach. (The agency offered to extend her term, but she returned home this month instead.)

Other au pairs feel the United States is a better place to be in the current crisis. The coronavirus has worsened dramatically in Brazil, where Flavia's parents run a store selling kitchen items. "If my parents have problems in Brazil, I can help them," Flavia said. "The dollar is high. I can send them money."

HAS HER HANDS FULL

Valeria Rodriguez, 26, an au pair from North Coahuila, Mexico, has her hands full in Tampa, Fla., looking after four children, 5, 3, 2 and 1. "Before coronavirus, I could do all my activities. I could go out with my friends and have a quiet dinner," she said. "Now all four kids are home all day, and I have to keep them busy, and life has changed. Every 15 or 20 minutes I need a new activity."

"They bore so fast," she said, laughing.

Still, Rodriguez is happy to be in Tampa, even though rates of infection are skyrocketing. "We go to the bars and the beaches here, but with precautions," she said.

And Flavia managed a visit to Las Vegas for the Fourth of July weekend, although it wasn't a wild experience because she upheld social distancing. "When I got back I did the covid-19 test and was negative," she said.