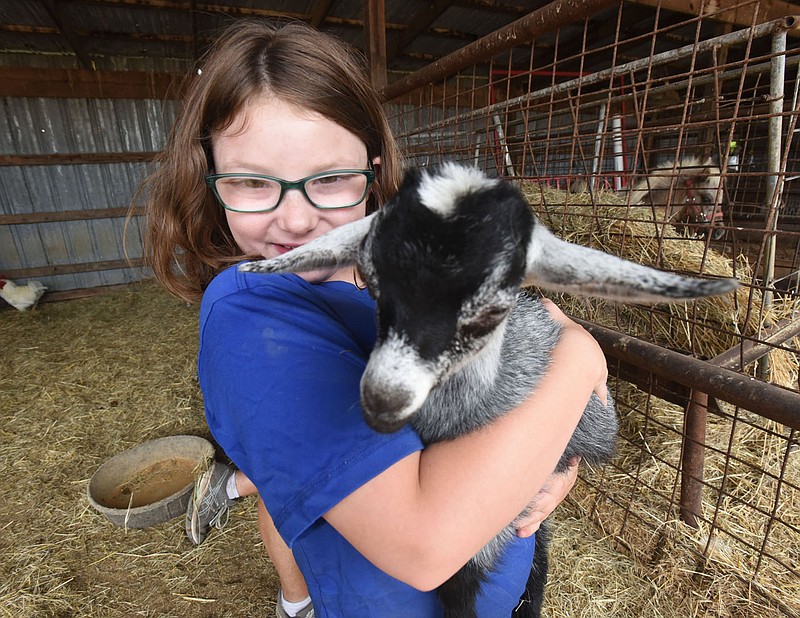 Aspen Boger, 10, hugs a one-month-old baby goat July 21 2020 at the Connie Boger family farm in the Hickory Creek community. Kids and adults can pet goats, pigs and a menagerie of farm animals at a petting zoo Boger operates on weekends. Her overall goal is to educate young people about agriculture. (NWA Democrat-Gazette/Flip Putthoff)

"Bunky was a rodeo clown, working the rodeo in Deadwood, S.D., and I was there as a spectator," Connie Boger starts the story. "That was in August 1973."

Apparently, it was love at first sight. The couple married in November of that year -- even though Connie's less-than-delighted dad said he didn't know where Arkansas was. But Boger had a farm, Connie had ranch experience, and the couple started a life together that sounds like something out of a movie. Before Bunky died in 2018, the two -- with help from their children -- traveled the United States with as many as four semi truck-and trailer combinations, first going to rodeos and later bringing petting zoos and pony rides to fairs from Boise, Idaho, to Roswell, N.M., and Wisconsin, Iowa and Nebraska to the territory of Puerto Rico. Connie even performed in the ring with a buffalo that was trained to ride and do tricks like standing on a pedestal and walking on a teeter-totter.

"There was never a dull moment," Connie Boger says simply.

Last year, the kids helped their mom make the fair circuit that started in Florida in February and ended in the fall in Yakima, Wash., and she fully intended to do it again this year. Then the covid-19 crisis shut down fairs across the country, and Boger found herself at home with a barn full of animals that were just as bored as she was.

"I just have a passion for putting this information out there for people to absorb," she says of the educational efforts that come with the petting zoo. "You can't tell somebody that the milk is warm when it comes out of the cows; they need to see it and feel it.

"So I thought, I'm right here along this road on the way to Hickory Creek Park. And all these kids have been cooped up in the house for months. And I've got the tents anyway. So why not try it here, at the house? It might be a bomb, but it wouldn't be the first thing I didn't succeed at! Besides, the ponies have eaten all winter long and they need a little exercise!"

Boger put up a 40-by-60 foot tent, the family helped by creating a Facebook page, new signs were made with Arkansas farm facts, and the petting zoo and pony rides are open for business for the next few weeks.

"The grandchildren are here -- I'm going to virtual school them when the time comes -- but the two littlest had never seen the tent pushed up," she marvels. "I had never thought about that aspect of it. I've got friends who have never seen our operation open. The grandkids have never seen the cocoon turning into the butterfly."

Bringing the animals up from the barn has got to seem simple compared to life on the road. Boger says her husband made a custom house trailer that traveled on one of the semis and offered everything she could want from a side-by-side refrigerator to satellite TV. At each stop, they'd set up two 40-by-80 foot tents, and families would stop in to experience milking a cow, watching chicks hatch, petting goats and donkeys and seeing all kinds of cattle, sheep, ponies and horses often for the first time.

At the beginning of the day, Connie and Bunky would feed the animals, and at the end of the day, she'd use her house on wheels to feed her crew a home-cooked meal of roast beef or spaghetti -- or whatever else could be cooked between her other chores. Finally, before bedtime, she'd count the money from the pony rides. The petting zoo has always been -- and is now -- free. The only money it makes is from feed that can be purchased to give to the animals -- "oats for the goats," Boger jokes.

"These are things I think kids need to see and do and know," Boger says of interaction with the animals. "So many people have never seen a sheep or a goat or a pot-bellied pig. They need to -- and I want them to!" 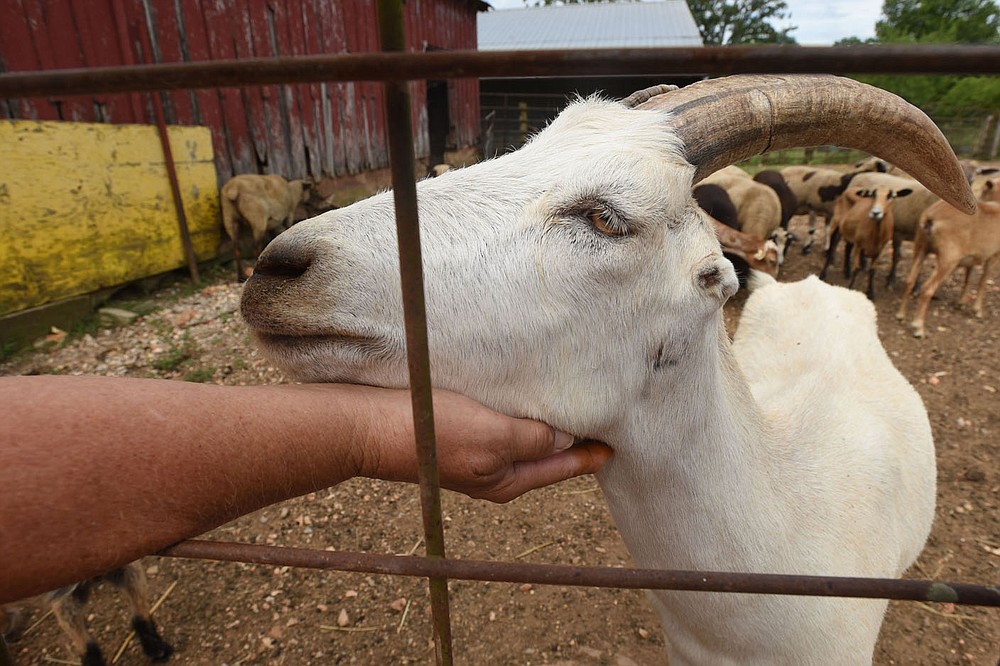 Boger pets one of the goats that kids and adults can pet on weekends at her farm on Hickory Creek Road. (NWA Democrat-Gazette/Flip Putthoff) 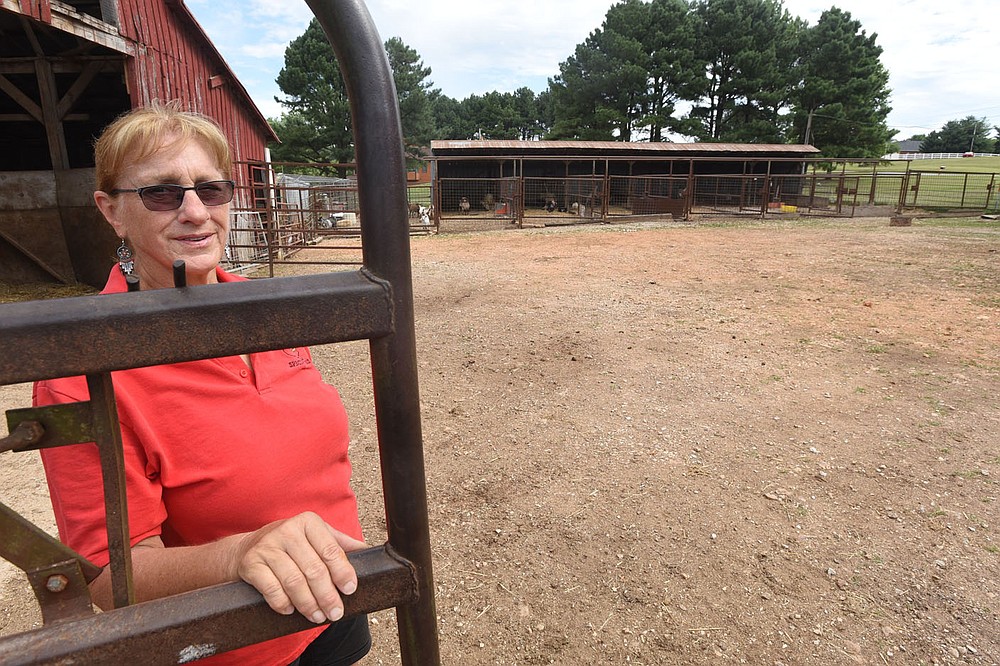 Connie Boger has been a farm girl her entire life. She grew up on a farm in rural South Dakota and now educates young people about agriculture with her array of farm animals kids and adults can see and pet. Boger operates a petting zoo on weekends at her farm along Hickory Creek Road in the Hickory Creek community. (NWA Democrat-Gazette/Flip Putthoff) 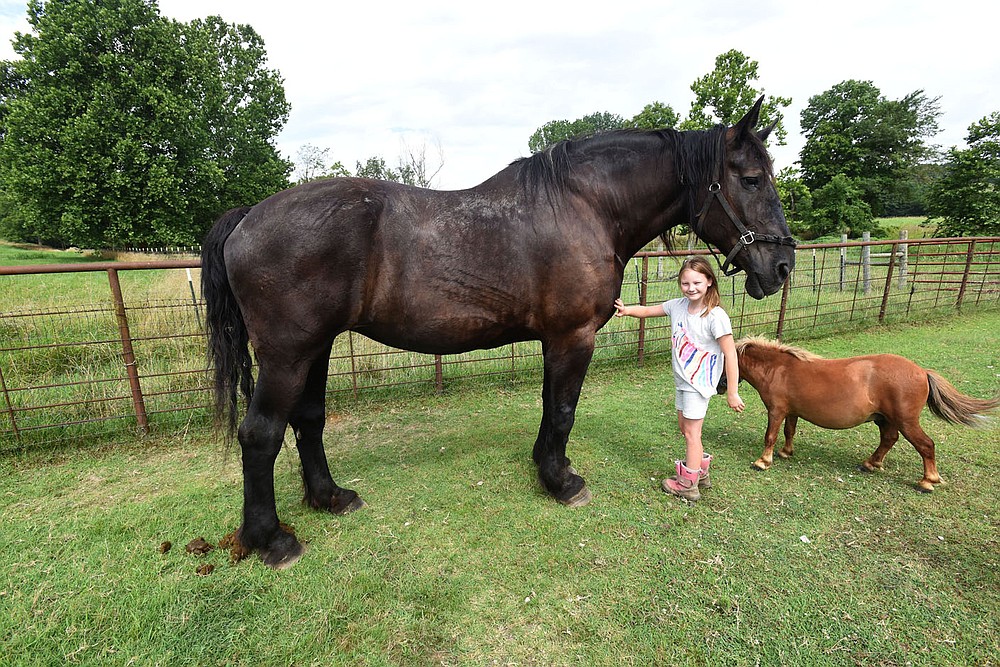 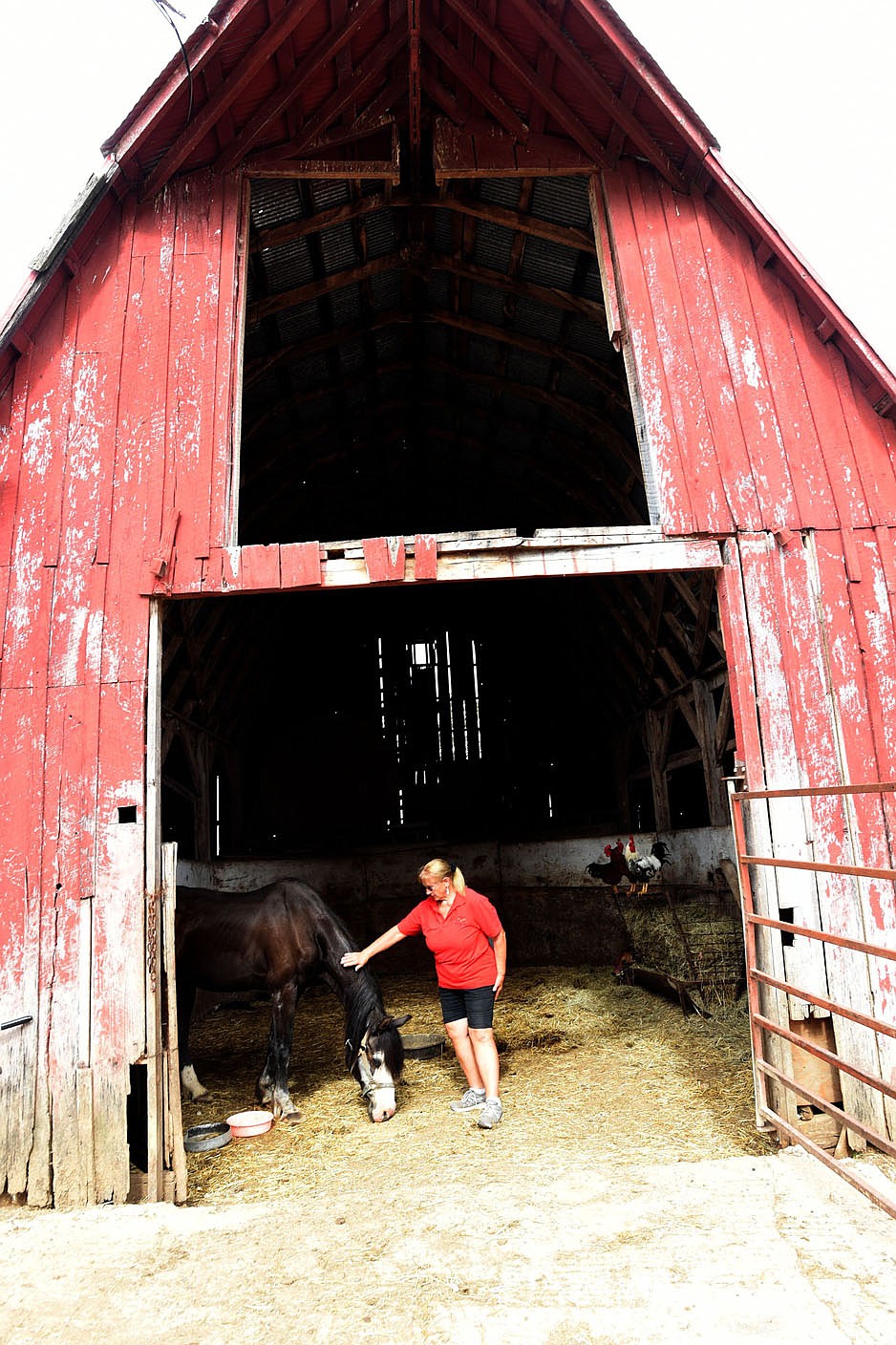 Boger pets a rescue horse that "was just skin and bones" when she took it in. The horse is doing well now. (NWA Democrat-Gazette/Flip Putthoff) 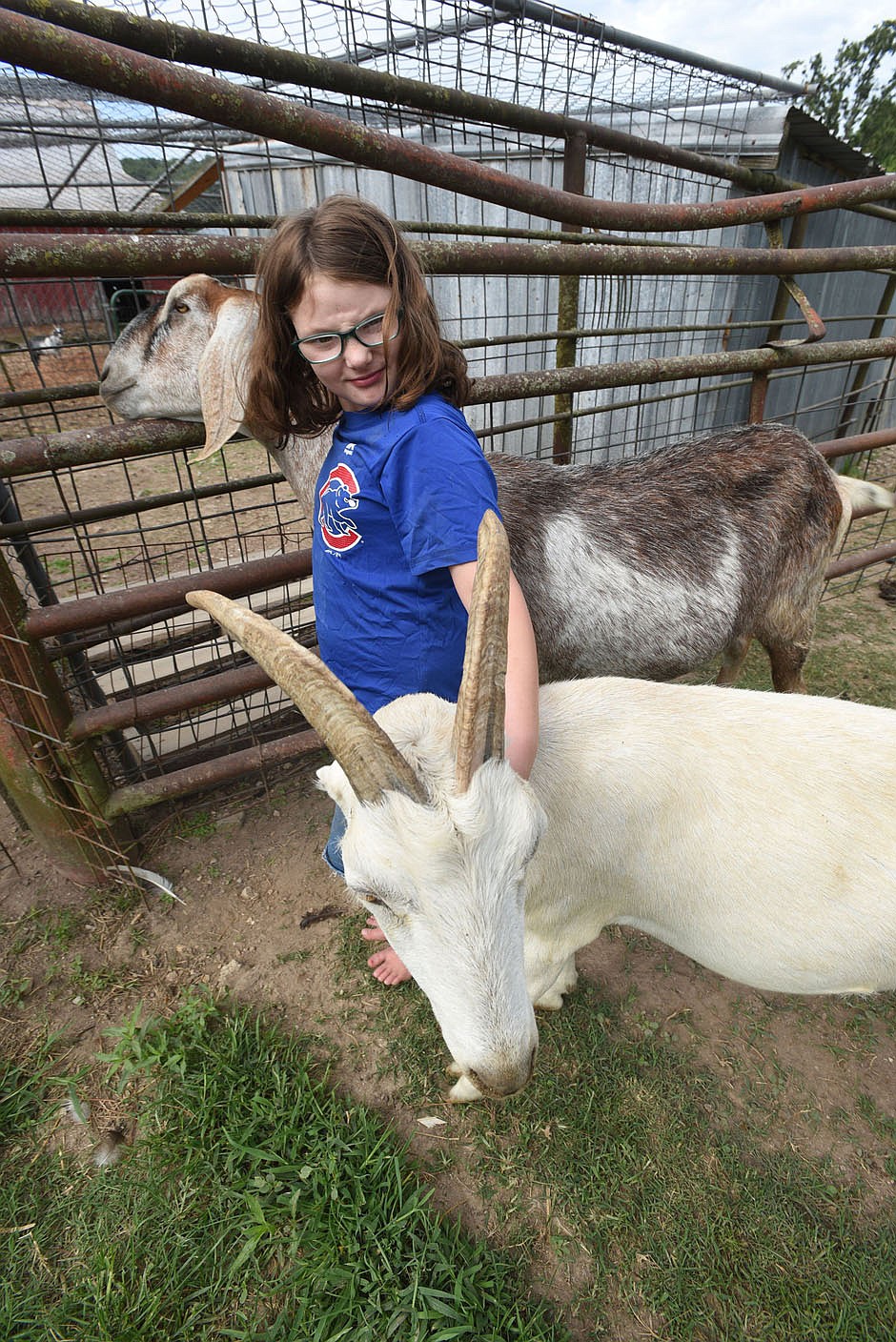 Aspen Boger, 10, basks in goat love at her grandmother's farm on Hickory Creek Road. Connie Boger is usually on the road with her animals during summer. This year she's staying home and operating a farm-animal petting zoo on weekends. (NWA Democrat-Gazette/Flip Putthoff) 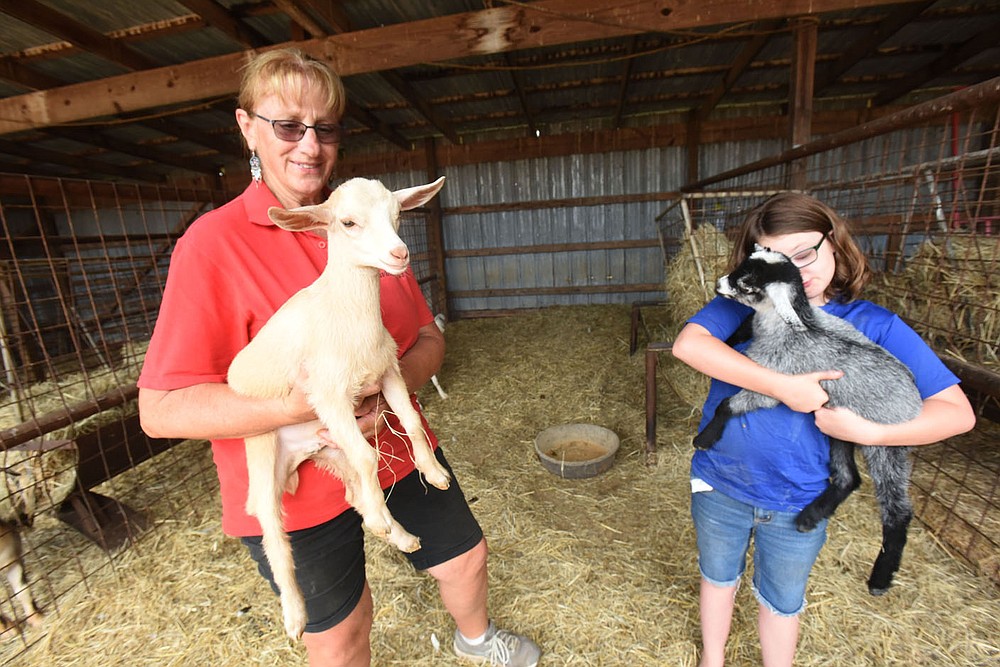 WHEN — 2-7 p.m. Saturday and Sunday for the next few weeks

COST — The petting zoo is free; there is a charge for pony rides, and visitors may purchase treats to feed the animals.