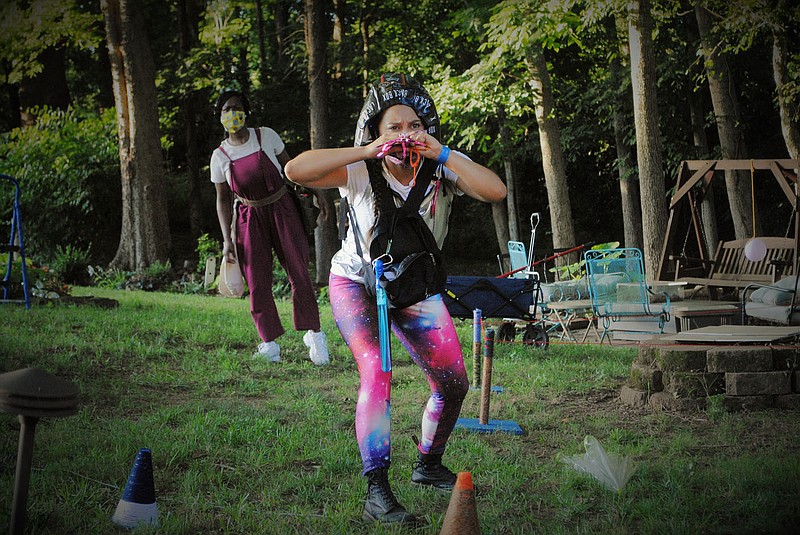 The Clown (Na'Tosha Devon) looks on curiously as The Space Traveller (Claire Fossey) works on an "experiment" in the Curbside Theatre production "Hold Fast." The play is an answer to the yearning for live theater that many are feeling during the coronavirus crisis. (Courtesy Photo/Lynn Meade)

"It's like pizza delivery," Laura Shatkus says, "but better for the heart."

That's a succinct explanation of an ArkansasStaged project called Curbside Theatre. Conceived just after the covid-19 crisis hit Northwest Arkansas, it was born through the work of playwrights, performers and technicians and is a new kind of intimate performance that may be the theater of the future.

"This piece, now titled 'Hold Fast,' was devised and created over the period of 31/2 months by myself, Kholoud Sawaf, Mischa Hutchings and Michael Bell, with additional contributions from Adrienne Dawes, Na'Tosha Devon, Claire Fossey and Audrey Romero," Shatkus explains. "We began with the question: 'What do people miss most?' and set out to create a theatrical care package for the audience."

Challenged with creating new theater for an unprecedented time, Shatkus and her collaborators also tried a process new to them.

"We spent most of our initial creative work using a method called Moment Work, developed by the Tectonic Theatre Company ('The Laramie Project,' '33 Variations') which embraces all aspects of theatre equally -- light, sound, movement, props, costumes, and yes, text too, but rather than leading with text, it asks creators to let these other elements inform the story," she explains. "Shockingly, this process worked really well. We did a lot of self-taping of original moments on our own, then presented these short video clips to one another and analyzed them via Zoom. Next, we began to sequence and layer them, and soon enough we had something like a script!"

In an abbreviated two-week rehearsal process, "we workshopped the piece and tried new things with the actors," Shatkus says. "And now, indeed, we have a play!"

The 35-minute, interactive production explores the themes of isolation, mental and physical health, empathy and human connection, she says. "As told through the eyes of a Space Traveller (Claire Fossey), a fastidious Clown (Na'Tosha Devon), and a mysterious voice and force that keeps us guessing, the play is a very fun ride for the audience."

And still, no one knew if it would work. Shatkus says the first performance took place July 7 at the home of longtime ArkansasStaged supporter Sue Coppernoll.

"She and her family -- Kelly, Dean, and Connie -- sat in their driveway and watched the play performed on their front lawn," Shatkus remembers. "It was pure joy to hear their peals of laughter and applause. Connie told me she felt alive again, and Sue said, 'We may not be your biggest audience but we are your most grateful audience.' She also turned back to me at one point during the show and exclaimed, 'This play was made by crazy people!' I think it's the best review I've ever received."

ArkansasStaged has been around since 2013, presenting staged readings of contemporary plays and experiential theatre in places such as 21c Museum Hotel, Crystal Bridges Museum, Fenix Fayetteville, and Mount Sequoyah," Shatkus reminds, "but this is the first time we've taken it to the streets!" Stops have included Hillcrest Towers, a low-income housing community in Fayetteville; Butterfield Trail Village retirement community; and families whose loved ones with disabilities are served by Arkansas Support Network.

"Unfortunately, I think the situation is pretty bleak for theatre in buildings for the next three to five years," Shatkus says. "But artists all over the country are taking the work back from institutions and creating their own innovative ways of presenting theatre. My dear colleague, Stephanie Faatz-Murray, has a show in North Dakota that's about to start -- a Hamlet trunk show presented at drive-in movie theatres using the sound and projection available in those spaces. I think she's a genius."

Having a performance of "Hold Fast" delivered is free.

"That being said, we are still fundraising, and tax-deductible donations can be made through the links on our website," Shatkus says. "We have no major corporate sponsorship, and the entire thing has been funded so far by individuals and community members from all over the world." 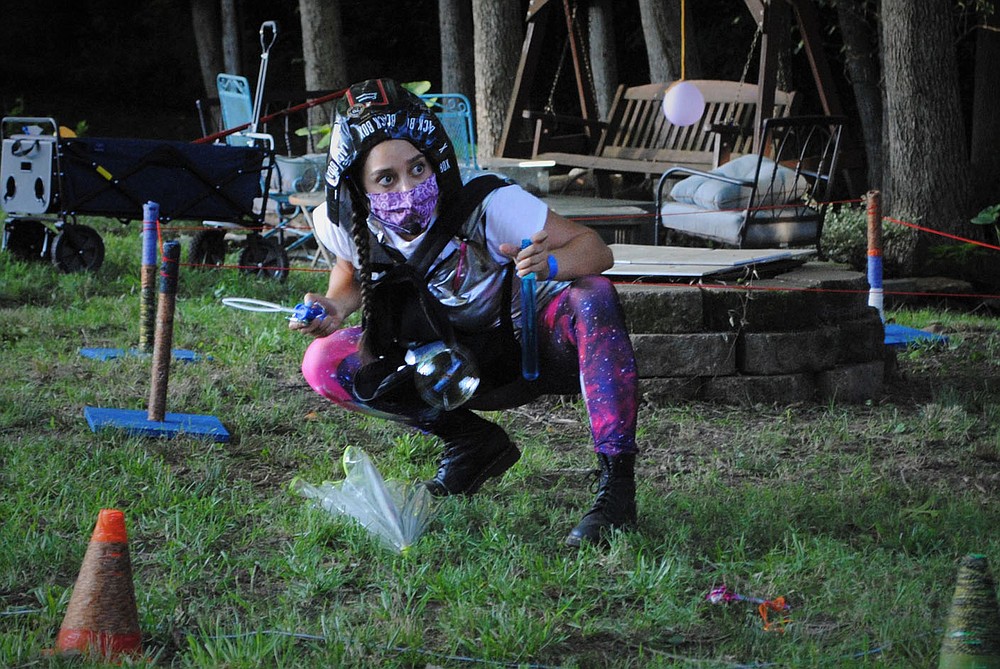 Claire Fossey as The Space Traveller investigates the creatures (audience members) in a Curbside Theatre performance at Lynn Meade's home. Created by ArkansasStaged, the premise of Curbside Theatre is it can be delivered to small audiences and performed outdoors. (Courtesy Photo/Lynn Meade) 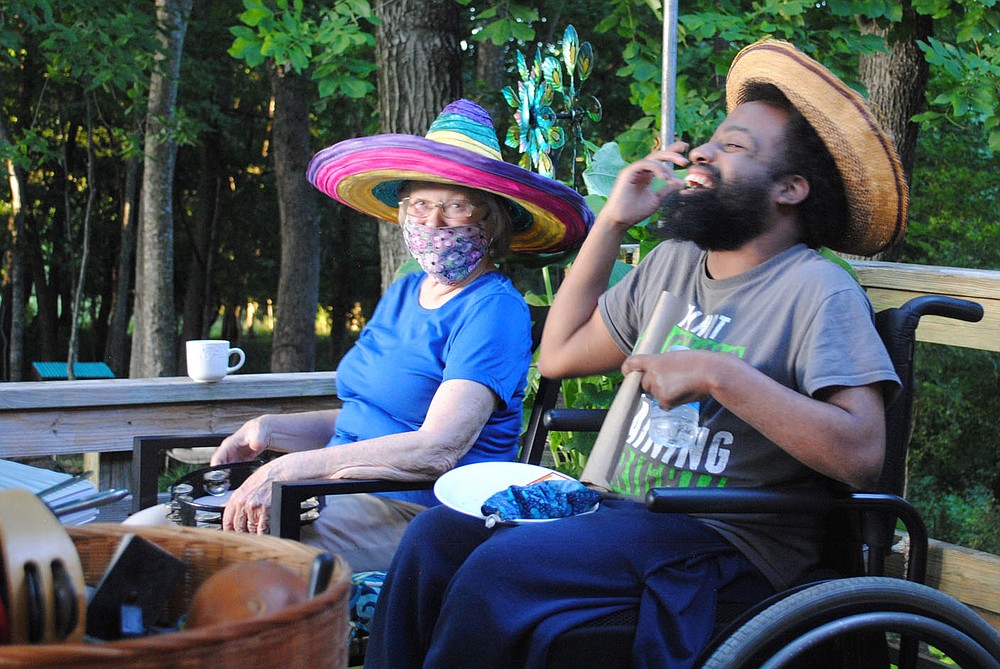 Garret Ramsfield laughs uproariously as his mother Geri shows off her party hat for the camera. Audience members from the same household can be in close proximity to one another but, per a set of signed "agreements," must remain 15 feet from the Curbside Theatre performers at all times. (Courtesy Photo/Lynn Meade) 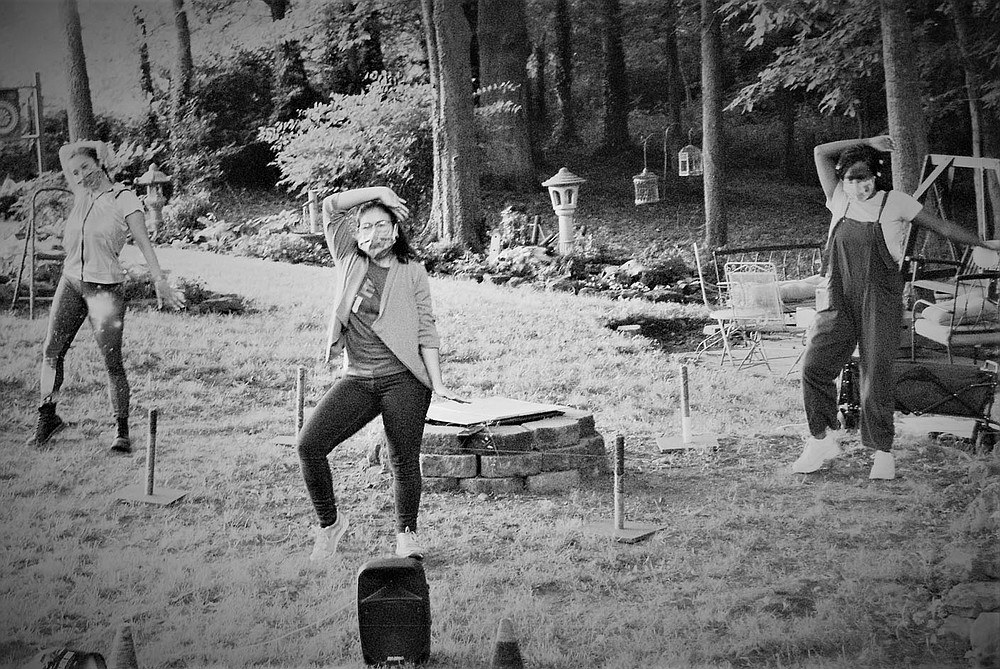 WHERE — Delivered to your home, with “priority access is being given to marginalized communities”