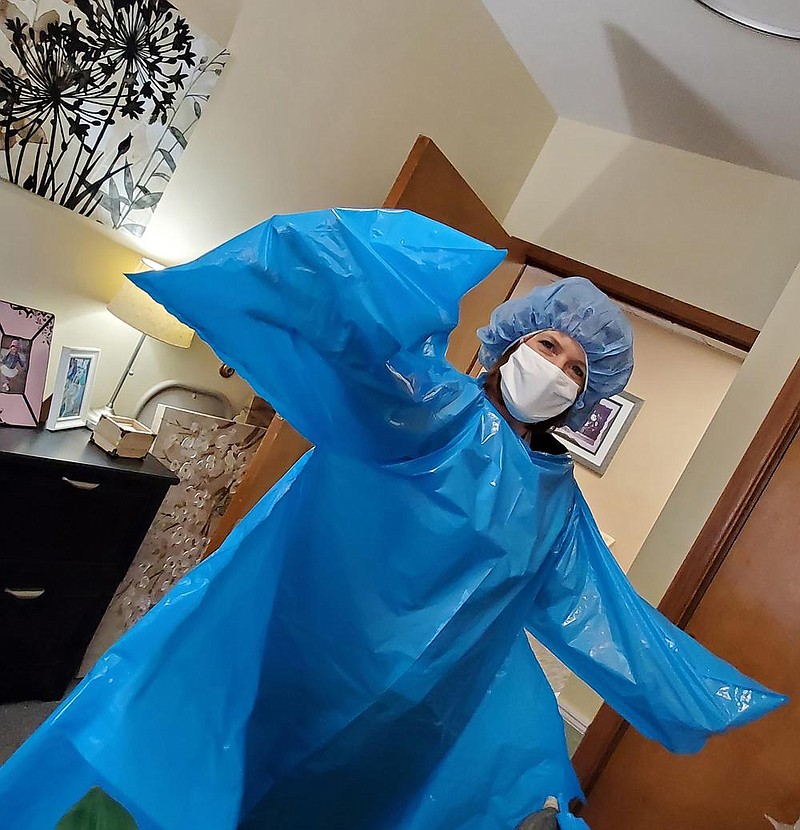 A health care worker shows a blue gown with no openings for hands that was provided by the federal government to a nursing home in Seattle. (The New York Times/LeadingAge)

Nursing home employees across the country have been dismayed by what they've found when they've opened boxes of protective medical gear sent by the federal government, part of a $134 million effort to provide facilities a 14-day supply of equipment considered critical for shielding their vulnerable residents from the coronavirus.

The shipments have included loose gloves of unknown provenance stuffed into unmarked Ziploc bags, surgical masks crafted from underwear fabric and plastic isolation gowns without openings for hands that require users to punch their fists through the closed sleeves. Adhesive tape must be used to secure them.

Health regulators in California have advised nursing homes not to use the gowns, saying they present an infection-control risk, especially when doffing contaminated gowns that must be torn off.

Some nursing homes have received masks with brittle elastic bands that snap when stretched. None of the shipments have included functional N95 respirators, the virus-filtering masks that are the single most important bulwark against infection.

"People hate to complain about personal protective equipment they're getting for free, but many of these items are just useless," said Brendan Williams, president of the New Hampshire Health Care Association, which has been a fielding a flurry of calls about the defective gear from nursing homes it represents. "It's mystifying that the government would think this is acceptable."

The Federal Emergency Management Agency began shipping the masks, gowns and gloves this spring to 15,000 nonprofit nursing care facilities whose limited finances have made it difficult to buy protective equipment on the open market. The first cache of shipments was completed in mid-June, and the second round will wrap up by early August.

In a statement, FEMA said it had addressed the complaints about the first shipment of goods and had asked the private contractor that is providing the supplies to replace the tarplike gowns with models more familiar to medical personnel. The agency said, however, that the original gowns sent out meet federal and industry standards.

"We have received complaints on less than 1% of the total PPE shipments to nursing homes," the statement said. "We continue to engage with nursing homes to keep lines of communication and feedback open at all times."

FEMA subsequently acknowledged in an email that the contractor has been sending out a small number of the older gown models.

More than 40% of all coronavirus deaths in the United States have been tied to nursing homes, according to a New York Times analysis, which found that the virus had infected 316,000 people at 14,000 facilities as of July 15. The virus has been particularly lethal to those in their 60s and older, more so for those in poor health, and it can rapidly spread through buildings where residents live in close quarters and workers move from room to room.

"The federal response to protect one of the most vulnerable populations in the country has been a dismal failure," said Tamara Konetzka, a health economist at the University of Chicago who has been studying the pandemic's outsize effect on nursing home residents.

The crisis is likely to intensify as the virus gains a foothold in nursing homes across the Sun Belt. Infections at long-term care centers in hot-spot states have jumped by 18% since late June, according to an analysis by Kaiser Family Foundation. Florida recorded a 51% rise, and Texas saw its cases climb by 47%.

The federal government has not said whether it plans to provide nursing homes with additional personal protective equipment in the months ahead.

The Centers for Medicaid and Medicare, which oversees nursing homes, earlier this month said it would supply every adult care facility in the country with rapid, point-of-care test kits, but the rollout is expected to take months. In the meantime, the vast majority of nursing homes in the United States are unequipped to regularly screen their employees and residents for the coronavirus.

In a call with nursing home providers last month, Col. Brian Kuhn, director of operations at the Defense Logistics Agency, blamed Federal Resources Supply Co., the private contractor that is providing the goods.

'SLIPPED THROUGH THE CRACKS'

"They just kind of carte blanche shipped them all out," Kuhn said, according to a recording of the call posted online. He said that the masks made from fabric were not intended to be used by staff members -- only by nursing home visitors -- and that the expired respirator masks never should have been distributed. "It was one of those things, I'll be honest, that just slipped through the cracks," he said.

In response to the complaints, FEMA directed Federal Resources Supply Co. to produce an instructional video explaining how the gowns should be donned and doffed. The contents of each shipment are determined by the number of employees at each care center.

Federal Resources, which is based in Stevensville, Maryland, did not respond to questions sent by email.

In interviews, nursing home executives and employees that have received their second shipments say the contents are an improvement over the first batch but that many problems remain.

Nursing homes in New Hampshire have received face masks with flimsy paper ear loops instead of elastic bands. In Arizona, some facilities have been sent gloves that are either all large sizes or all extra small.

Virginia Mennonite Retirement Community, a 120-bed nursing home in Harrisonburg, received its second shipment two weeks ago. It contained a mix of gowns -- several hundred of the standard and highly coveted isolation gowns and a similar amount of the problematic gowns.

"I'm not sure how we would even use those," said Jan Emswiler, a nurse educator who trains employees on the proper use of protective gear. She was especially confounded by a packing slip claiming the boxes contained 3,500 pairs of gloves. There were only 1,000 pairs, she said.

"We appreciate what we've gotten, but we could really use a lot more," Emswiler said.