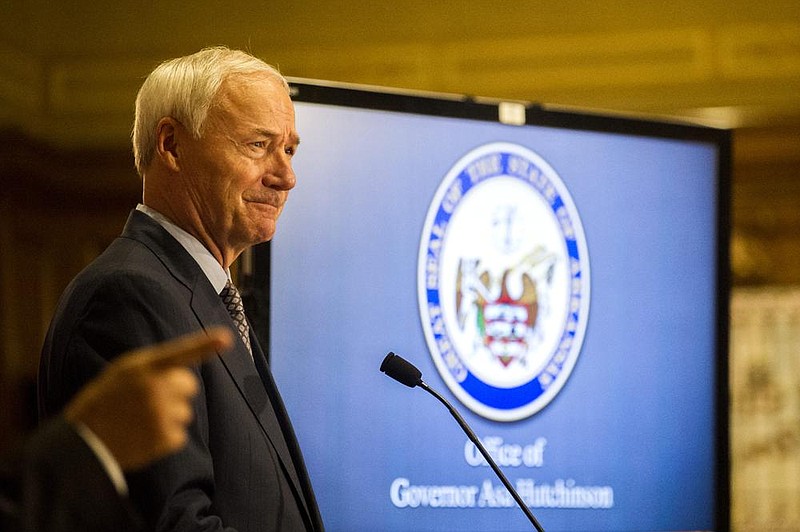 "Nine-hundred cases is too high," Hutchinson said. "We need to reduce that so we can continue to make progress.

"So follow all the guidelines. Wear your mask. Make sure that you socially distance if you go outside.

"Just be careful, because it's the backyard barbecues, it is the swim parties, it is other things that we're not careful in, that can lead to a spread of this."

The state's death toll from the virus, as tracked by the state Department of Health, rose by eight to 394.

The number of patients hospitalized with covid-19 increased by 17 to reach a record high, 497.

Those patients included 109 who were on ventilators, up from 107 a day earlier.

Hutchinson said the increases in hospitalizations were "spread out around the state, which is good news and it doesn't strain our capacity to a great extent."

The increase in cases on Friday included a rise of seven among prison and jail inmates. Such increases can reflect new cases or ones that were added to the state total earlier but not immediately classified as coming from a jail or prison.

The remaining increase of 983 cases among the state's nonincarcerated population was the second-highest one-day increase in such cases.

[Video not showing up above? Click here to watch » https://www.youtube.com/watch?v=XQvlJtjWbHA]

The average number of cases added each day over a rolling seven-day period increased to 784, setting a record.

Meanwhile, the number of cases in the state that were considered active rose by 19 to 7,028 as 963 Arkansans were newly classified as having recovered.

At his near-daily news conference on the pandemic, Hutchinson said he remained focused on opening the state's schools to in-classroom instruction next month even after President Donald Trump acknowledged at a White House briefing Thursday that some schools may need to wait.

The president spoke in front of a map of the United States with some counties, including several in Arkansas, colored red, apparently indicating an increase of 100 cases or more per 100,000 residents over the previous week.

"In cities or states that are current hot spots -- and you'll see that in the map behind me -- districts may need to delay reopening for a few weeks, and that's possible," Trump said. "That'll be up to governors.

"The decision should be made based on the data and the facts on the grounds in each community, but every district should be actively making preparations to open."

"In areas where there are hot spots, remote and distance learning might need to be adopted for a certain amount of time," Mitchell Zais, deputy U.S. education secretary, said during a telephone briefing with reporters about guidance on school openings that the U.S. Centers for Disease Control and Prevention released Thursday evening.

CDC Director Robert Redfield said during the call that he would consider a "hot spot" an area where the percentage of tests that are positive exceeds 5%.

Asked about the criteria parents should consider when deciding whether to send their children to school, U.S. Surgeon General Jerome Adams told CBS News on Friday that "we like to see positivity rates of less than 10% in a community."

According to data from a state website, the cumulative percentage of tests that have been positive exceeded 20% in five Arkansas counties as of Friday.

That includes Lincoln, Lee and Hot Spring counties, where large outbreaks at prisons have occurred, as well as Yell and Washington counties.

The rate was above 10% in Sevier, Johnson, St. Francis, Chicot, Crittenden, Pope and Miller counties and above 5% in 36 other counties. In Pulaski County, the rate was 7.4%.

Statewide, 8.1% of the tests have been positive.

The rate was 6.3% for tests that were performed Thursday, although that percentage is likely to change as more results from tests performed that day are reported to the state.

Over a rolling seven-day period, an average of 9.3% of the state's tests were positive as of Thursday.

The statements from federal officials were similar to recommendations issued Tuesday by the Arkansas chapter of the American Academy of Pediatrics.

The chapter said the state should open classrooms only in counties that meet the White House guidelines for states on moving from one phase of reopening to the next.

Those call for a "downward trajectory" of cases or the percentage of tests that are positive over a two-week period.

Hutchinson said Friday that he noticed the new CDC guidance but had not yet studied it.

"They would like to see it closer to 5% positivity rate as we reopen schools, and so we've got a lot of work to do over the next 30 days." Hutchinson said.

He said he wasn't setting that as a criteria for reopening, however.

"I'm just saying it's a relevant factor that we need to work toward," he said. "We want to start school on Aug 24. We've got time to work through these issues, and that's what we're doing."

The cases added to the state's total on Friday included an increase of 55 in Newton County, representing a fivefold increase in the sparsely populated county.

"It's frightening," said Jan Larson, the mayor of Jasper, which is the Newton County seat. "We're almost in shock to be honest with you."

"So we're trying to determine if that's a nursing home environment or some other facility," he said.

McNeill said the new cases had not yet been added to the totals in the report.

"Newton County Nursing Home is doing everything they can to manage the situation and will continue to remain diligent in implementing containment measures," Bunch said in an email. "As we know, the elderly are at the most risk for this disease."

In late March, a staff member at the nursing home tested positive for the coronavirus, but precautions were quickly put into place. At that point, Newton County had fewer than four positive cases.

Larson said more people in Jasper have been wearing masks since the governor's directive went into effect Monday.

"We're wearing masks," she said. "I did go into Harps yesterday and I only saw one man not wearing a mask. ... We've been doing well. People have stayed home, worn their masks."

Hutchinson said the new cases in the county illustrate the virus's reach.

"Everybody has to be mindful there's not any area of the state's that's exempt," he said.

Interim Health Secretary Jose Romero said the federal government will provide "point-of-care testing" at many nursing homes. He said Hutchinson has "invested in several hundred" of the machines.

"These point-of-care testing machines can be used in these nursing homes to rapidly identify early, or initial, cases of covid," he said. "We can then respond to it very quickly instead of allowing it to blossom into something more. So I think we're going to have better control of this in the next few months."

The federal Centers for Medicare and Medicaid Services said this week that it would be sending the machines to every nursing home in the country, although it didn't say when that would happen, Bunch said.

The agency said that it had 1,200 of the machines that it planned to ship out first. Washington County was listed as a "hot spot" county that would have priority for receiving one of the machines, she said.

The federal agency also said this week that it will begin requiring nursing home staff members to be tested every week in states where 5% or more of the coronavirus tests are positive .

Bunch said that she hadn't seen details about the new requirement as of Friday.

Asked for details about the testing machines purchased by the state, McNeill said in an email, "Those are still pending and we'll release additional information later when it is available."

In addition to the 55 cases in Newton County, the cases added to the state's total included 144 in Pulaski County; 82 in Washington County; 55 in Benton County; 38 in Sebastian County; 37 in Jefferson County; and 37 in Pope County.

At the Crawford County jail in Van Buren, 32 inmates have tested positive, Sheriff Ron Brown said in a news release.

He said specimens were collected from 173 inmates and 18 jail deputies and other staff members on Wednesday, after another inmate tested positive while at a hospital for an unrelated matter.

The sheriff received the results of the additional tests from the Health Department on Friday.

The inmates, who included 31 men and one woman, were all asymptomatic, Brown said. They will be separated from other inmates and monitored daily, he said. Every staff member tested negative.

Eight other deputies have been in self-quarantine after their contact with the first inmate who tested positive, Brown said. They were tested Friday. Brown said he hopes to receive their test results no later than Monday.

He said the jail places all new inmates in quarantine after they have been booked in, in accordance with CDC guidelines.

Among nursing-home and assisted-living residents, the number of cases, as tracked in Health Department reports, increased by 51 to 1,127.

That included 14 residents at Hot Springs Nursing and Rehabilitation, where 17 staff members also tested positive, according to a Health Department report.

At Legacy Heights Nursing and Rehab in Russellville, the number of cases among residents increased by 23, to 35, and among staff members by two, to 13.

At the state's Wrightsville prison complex, the number of inmates who have tested positive increased by 25, to 241.

Meanwhile, the Department of Corrections announced that two more prison inmates died of the virus on Friday.

A Ouachita River Unit inmate, who was in his early 80s and serving a sentence for sexual assault, died at CHI St. Vincent-Hot Springs.

The other inmate, from the East Arkansas Regional Unit near Brickeys, died at Baptist Health-North Little Rock. He was in his late 40s and serving a sentence for residential burglary.

The deaths brought the virus death toll among state prison inmates to 27, including six at the East Arkansas Regional Unit and eight at the Ouachita River Unit.

Information for this article was contributed by Thomas Saccente of the Arkansas Democrat-Gazette. 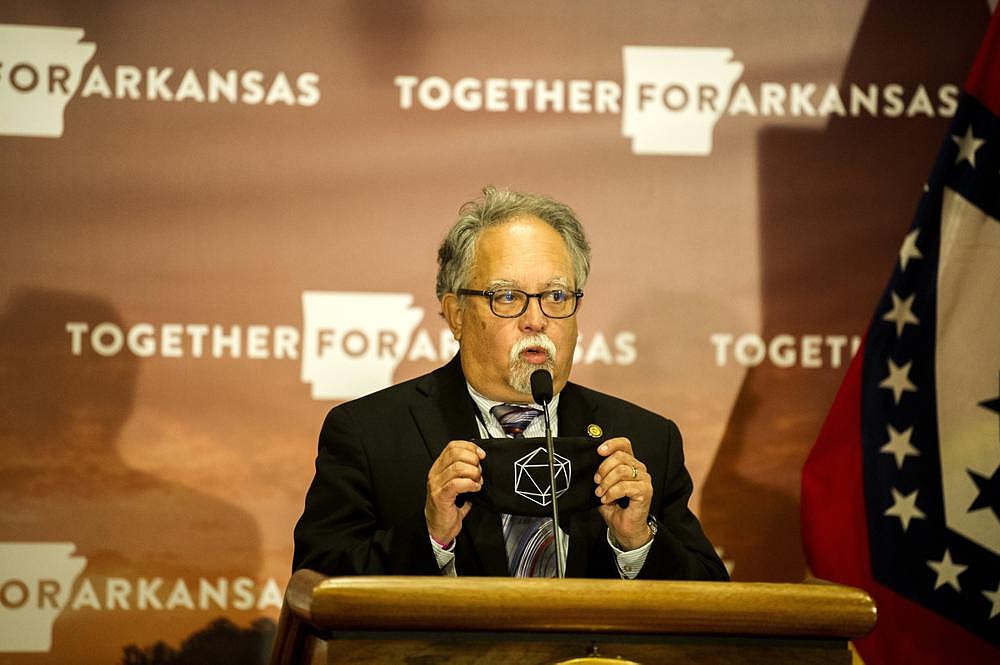 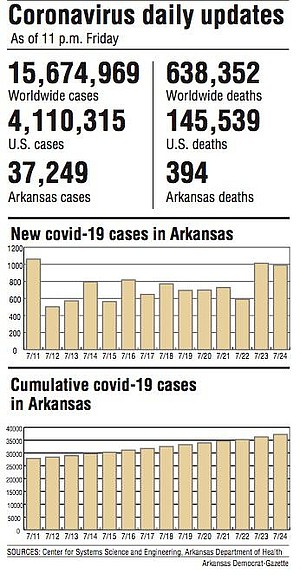