Dr. Nate Smith presents the sacramental elements at his ordination service July 15 at St. Andrew’s Church in Little Rock. (Special to the Democrat-Gazette)

Dr. Nate Smith, who had accompanied Gov. Asa Hutchinson for the state's daily coronavirus briefings since March, was doing so for the last time July 17 when the governor said he had received a text regarding Arkansas' outgoing health secretary.

"I just had a text from someone that asked to issue an executive order countermanding [Smith's] employment at [the] CDC and have him stay here, but I don't think my executive authority goes that far," Hutchinson said during the briefing.

Smith, who joined the Department of Health in 2004, has served as its secretary since 2013 but will leave the department next month to take a role as a deputy director at the Centers for Disease Control and Prevention in Atlanta.

Smith said he has felt a sense of commitment to the department's mission to protect and improve the health and well-being of all Arkansans in his work in public health, but his core values and faith also have helped him serve the spiritual well-being of others.

Smith has served as an ordained deacon of the Anglican Mission in America since 2014, and over the past year he has followed a calling that led to his consecration to the priesthood July 15 at St. Andrew's Church in Little Rock.

"The work of loving people well -- and that includes public service -- includes encouragement, includes directing people to their source of strength spiritually as well as otherwise," Smith said. "For me, it's that integration of ... what I do that people see on TV and what I do when no one's watching, and the role I play in trying to build up my colleagues in the health department as well as my parishioners at St. Andrew's.

"They all come from the same substance."

Smith, who grew up with an interest in science, applied to medical school with the goal of becoming a medical missionary after having a "transformational experience" during college that conveyed an "understanding [of] all that God had done through me, done for me through Jesus Christ and how he had ... shown his love for us.

"That was something that I've never fully gotten over," Smith said of the experience. "I hope I never do."

The four months he spent at a small mission hospital in the Democratic Republic of Congo helped Smith channel his love of science into an interest in medicine. A year into medical school at Baylor College of Medicine -- where he met his wife, Kim, who is originally from Vietnam -- he took a leave of absence to study at Dallas Theological Seminary, eventually attaining a master's degree in theology.

After medical school the couple spent seven of the next eight years as medical missionaries in Kenya -- Nate treating infectious diseases and Kim as an OB/GYN -- with a year in Arkansas between trips. During that time Smith began a career at the health department, and Kim has continued her practice at Saline Memorial Hospital in Benton.

When Nate joined the department, they were the parents of three toddlers adopted from Kenya, and would eventually adopt a fourth child from the country. Three are now adults, with their youngest starting ninth grade in the fall.

"We have a lot of history together as a team, and we've worked overseas doing pretty much the same thing -- a mix between medicine and faith together," Kim Smith said. "As we look to give people hope, both physically and emotionally, it's really important that medicine has both physical elements of healing and also spiritual or emotional healing as well."

"In my sense of calling and career, there would be these two very strong strands. ... They had been expressed in terms of my missionary work, but also in terms of serving as a teacher or leadership at my local church." Smith said. "As a missionary, it was pretty clear how my faith and my practice of medicine connected, but it felt less in my role at the Health Department, and I think that pride pushed me to ask, 'What next?'"

Deacons are ordained in the Anglican Mission in America and Smith, having attended seminary school, already had the foundations of a priest. Rev. Robert Cook, rector of St. Andrew's Church, said he wasn't surprised when Smith approached him about becoming a priest.

"Nate was already living out that [calling to be a priest], in a sense, in the life of the church," Cook said. "He is a servant, he is a man of great humility, he's a man of great authenticity."

Cook said in addition to other duties as a deacon at St. Andrew's, for years Smith has taught and preached regularly in the church's "Growing in Grace" ministry, which is devoted to helping people dealing with addiction.

"There's so many things Nate has done that you would not know, but he is a humble servant," Cook said. "He's had a tremendous impact not only on the life of St. Andrew's but in this community and then around the world."

Nate Smith was ordained into the priesthood by the Rt. Rev. Philip Jones, the Anglican Mission in America lead bishop.

Jones said consecrating Smith as a priest during a pandemic was "a remarkable event for the ordination of a remarkable person."

NO LAYING ON OF HANDS

Several modifications to the consecration made the event possible, Cook said. The 100 or so attendees work masks and remained socially distanced. There was no laying on of hands by all the other priests, as would normally take place during an ordination. During Communion, Smith removed his mask and stood alone at the altar, rather than serving Cook and Jones at the altar. Those in attendance also were given Communion elements upon entering the church for the ceremony.

Cook anticipates Smith will in time go on to continue to serve alongside other ministers at a church in the Atlanta area, much as he has in Little Rock before and after his consecration to the priesthood.

"The title of being ordained as a priest is one thing, but Nate just lives it out, so he will still live out what he believes as he goes to work at the CDC in Atlanta when he and his family get connected with the church there," Cook said. "He'll be able to serve in ways that come alongside the other ministers on staff at that church. ... He brings a lot of gifts, not just to the community but to the church as well."

The Smiths have been together in the business of pointing others in the right direction physically and spiritually, Kim said. Life has no guarantees, she added, and people must make the most of their lives by following God's example.

"Life as we know it is not in our control, ever. It's always in God's hands," Kim said. "He knows the day that you were born and the day that you will die, and whatever [is] in between, you just kind of follow his lead and do the best you can, and help others along the journey." 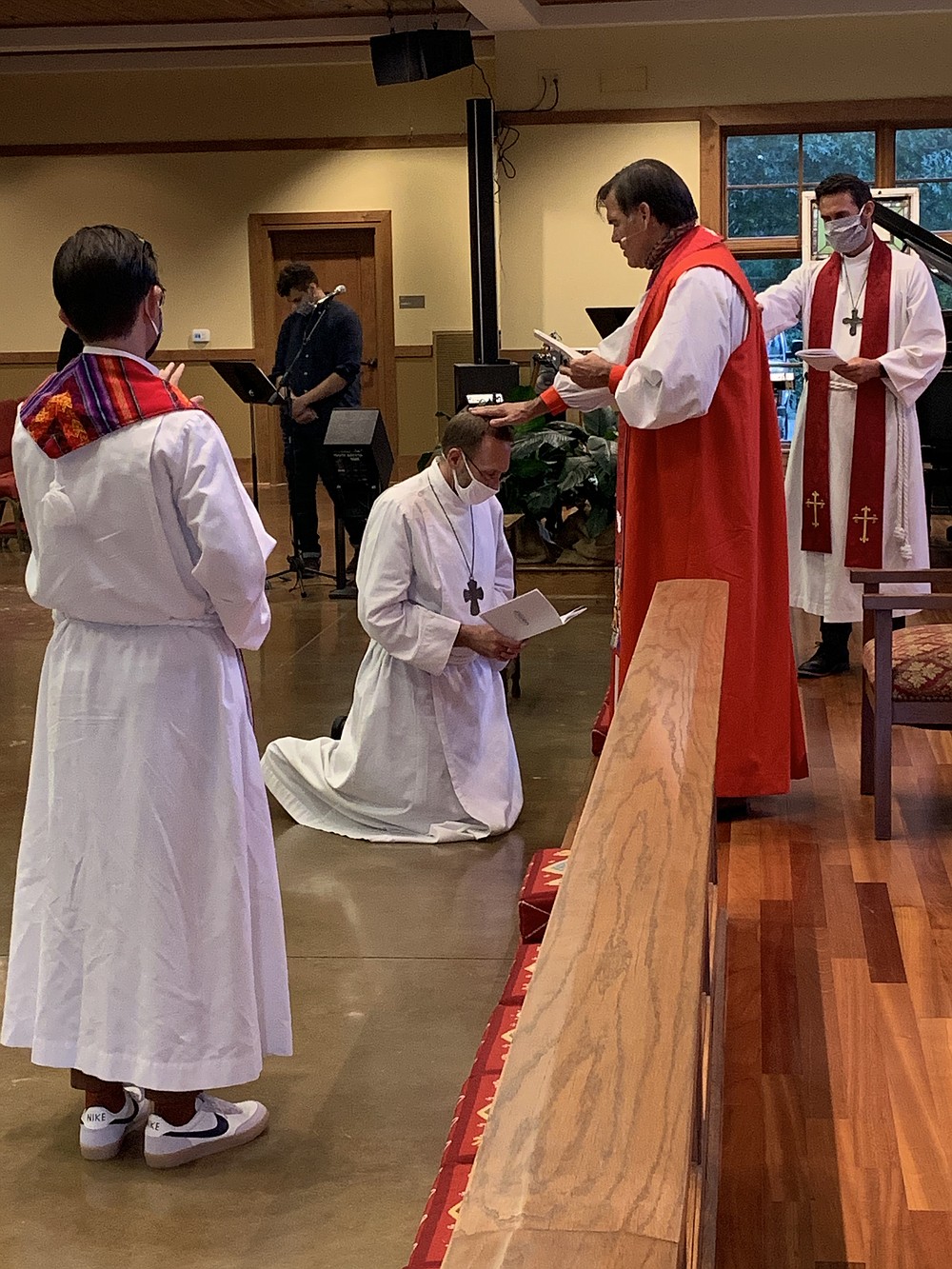 Dr. Nate Smith, kneeling, is consecrated as an Anglican priest by Bishop Phillip Jones as the Rev. Seth Richardson (left) and the Rev. Dustin Freeman (right) pray over him. (Special to the Democrat-Gazette) 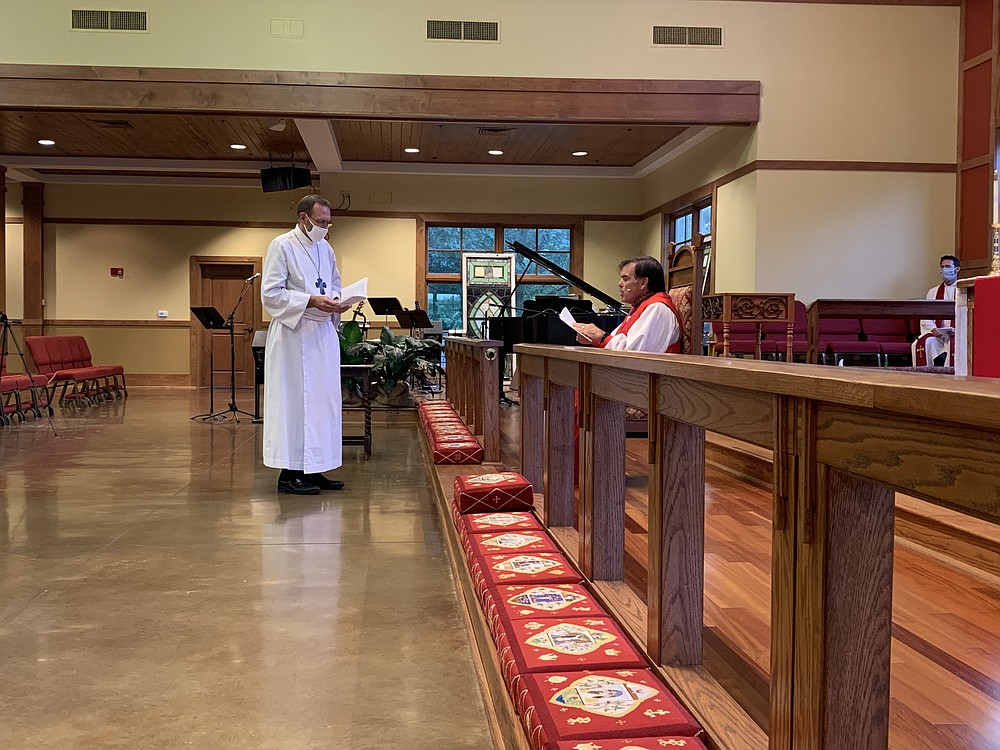 The Rt. Rev. Phillip Jones, lead bishop in the Anglican Mission in America (right), exhorts Dr. Nate Smith in the responsibilities of Anglican priesthood. Smith was ordained as a priest in the faith July 15 at St. Andrew’s Church in Little Rock. (Special to the Democrat-Gazette) 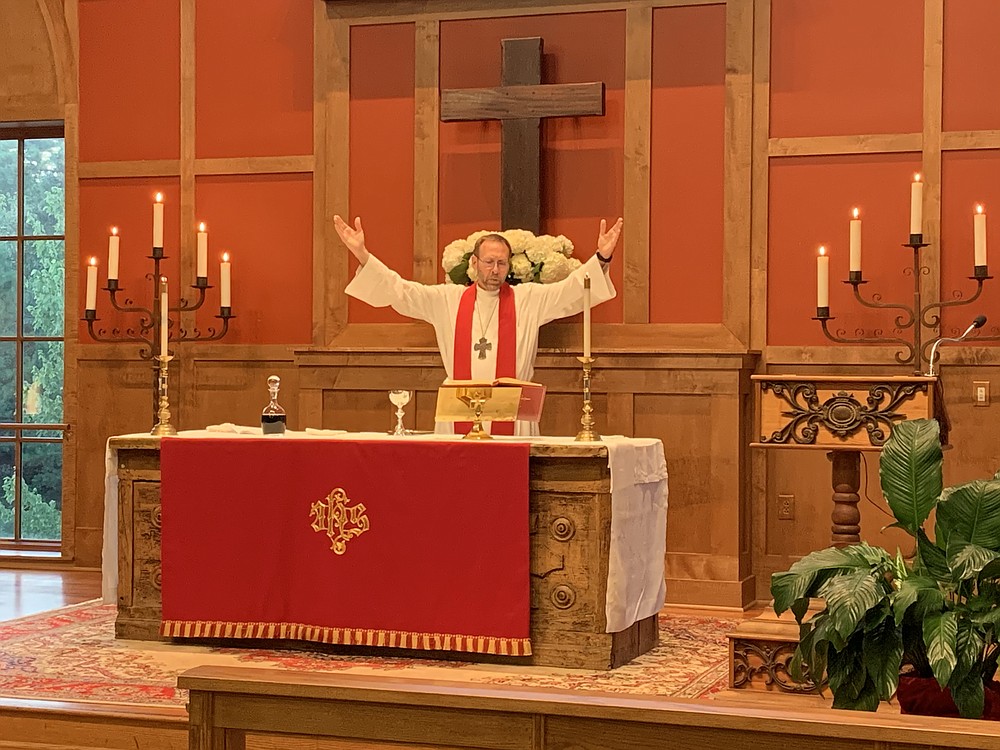 Dr. Nate Smith invites those gathered at St. Andrew’s to sing the Doxology at Smith’s ordination service July 15. (Special to the Democrat-Gazette)