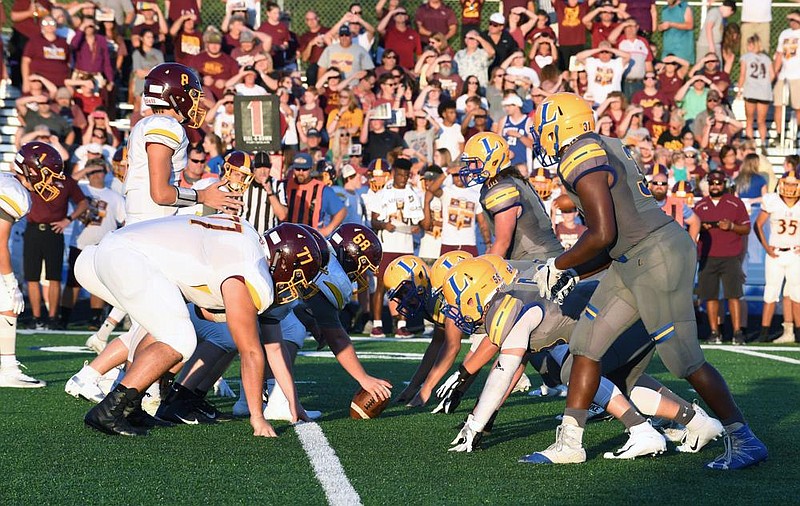 The football game between Lake Hamilton and Hot Springs Lakeside in 2018 drew more than 6,700 fans. This season, there may be no fans in attendance at games, providing there are games at all. (The Sentinel-Record/Grace Brown)

The first of a three-part series about the effects the continued outbreak of covid-19 and the surge of positive tests across the South could have on fall sports.

While plans for fall high school sports are still undecided, many professional sports leagues are on the verge of restarting, albeit without fans.

Many options are being considered for how high school athletes can compete this fall, one of which might be playing the regular season without fans.

Should high schools return to competition as scheduled, as early as 31 days from today, without fans, there are athletic directors who feel schools could survive the loss of gate revenue but the effects would stretch beyond the fall sports season.

"If that were the case, that would be tough for small schools," said Magnet Cove Athletic Director and head football Coach Caleb Carmikle. "It would be tough for us, and I imagine will be tough for many of the smaller schools just because we rely so much on our gate money to fund, not just the football program, but the entire athletic department. ... Of course it pays for all of our football expenses. It also pays for golf, cross country, our junior high volleyball; it pays for our spring sports.

"So the revenue at the gate is very important. We get some money off advertising and whatnot, but the majority of our money is made through the gate."

Smaller programs, like the Class 2A Panthers, would likely be affected more than higher classification programs, but even larger schools, like Class 6A Lake Hamilton, would feel the pinch of losing gate revenue.

"We're not going to be in a bind this year financially playing in an empty stadium, and we'll be fine next year," said Lake Hamilton Athletic Director Rick Waters. "But it could be the year after that that will be impacted by this year because football is a big revenue sport for us, too, but it's also an expensive sport. And a lot of the revenue comes in from football is spent right back on football.

"So outside of the fact that tennis, golf, swimming, bowling ... those sports that have no revenue coming in, I just try to balance the spending there, and I've told those coaches don't ask for a whole lot this year because ... we don't have anything to help balance that revenue expenditure right now because we don't know if we're gonna play football."

Athletic directors at Class 2A Mount Ida and Class 4A Fountain Lake agree that most of the revenue shortfall would be felt in the 2021-22 athletic budget.

"It'd be kind of like a baseball season, really. ... I don't think it would kill us,," said Mount Ida Superintendent and Athletic Director Michael White, adding that football primarily funds spring sports. "You pay officials; you pay your light bill for a year. It would hurt our band program as well because they get the concession stand in our school. ... For a small school, we're not hurting financially.

"Now some people it will hurt. It depends on the district, of course, because you lose money on baseball and softball every year. I don't care who you are."

Fountain Lake Athletic Director Marc Davis said that a reduced attendance at games rather than no fans at all would be better financially for schools, although that creates its own challenges.

"I have thought about going into the bleachers and putting 6-foot pieces of tape 6 foot apart, all the way through the bleachers, skipping a row, seeing how many people we can fit in there," he said. "And then, you want the parents to be able to see their kids play, so you theoretically, maybe give them first option because they may not get off work till 6 [p.m.] and can't get to the stadium till 6:45. ... You give the parents the opportunity to buy tickets ahead of time, pres-ale."

The financial concerns are not all that coaches and athletic directors have weighing on their minds.

Carmikle said that the fear of his players contracting covid-19 is something that keeps him awake at night.

"We read about how contagious this virus is, and the scary part is that a large group of people that are infected with the virus never show symptoms," he said. "And the kids are normally the ones who are asymptomatic, so we could have kids on campus tomorrow at a workout that have the virus and never know it. But they may pass it on to someone in their family or someone in our community, somebody on our coaching staff, who it may not be safe for them.

"So, just the safety of everyone, that's my biggest concern with all of it because I love my job. I love football, and I know how important athletics is to athletes all across the state and all across the country, and I know that football is what gets a lot of kids through school. And I think that definitely has to be taken into account, but at the same time, I would feel terrible if something happened to one of our kids throughout all of this. That's definitely my biggest worry."

White said each game increases the risk of a player or a fan contracting the virus.

Waters said that his biggest concern is allowing the athletes to be able to compete.

"First and foremost, let the kids play. ... If we have to play our sports programs without people in the stands, bottom line that's what it's about anyways. It's about the kids," he said.