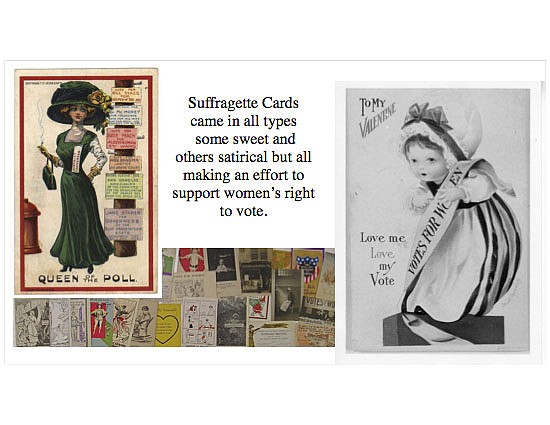 Suffragette cards came in all types, some sweet and others satirical, but all making an effort to support women's right to vote. (Courtesy Image)

Anyone who has ever been to Eureka Springs would be unsurprised by the story of Eliza "Lizzie" Dorman Fyler. Long before the turn of the 20th century, in 1881, Fyler formed the Arkansas Woman Suffrage Association "for the purpose of securing such legislation by the Arkansas General Assembly as shall secure to women all the rights and privileges which belong to citizens in a free republic."

She did not succeed. The organization dissolved in October 1885, and Fyler died in November of that year. But she set in motion a movement that eventually led to Arkansas women receiving the right to vote in 1917.

Fyler is just one of the women profiled in a new exhibit at the Eureka Springs Historical Museum. Titled "Celebrating 100 Years of Women's Right to Vote," the collection will be on show for the next three months -- and also celebrates the fact the museum is open for business, in spite of the coronavirus crisis.

"As with most of the businesses in Eureka Springs, it has been difficult," says Kent Turner, president of the museum board. "We are only open Thursday through Saturday, 9:30 a.m. to 4 p.m. While there has been good attendance in recent weeks, it is difficult in this environment to find volunteers who are willing to work."

But the museum has persevered, thanks in large part to the work done by its former director, Debra Moen, who had to leave the museum at the beginning of the covid-19 outbreak. The collection of art, photographs, publications and period dress begins with the Women's Christian Temperance Union, which Moen credited as "the most important organization that instructed women on organizational activities." Organized in 1873, it quickly spread across the country, made famous by the work of Carry Nation.

According to the exhibit, Nation spent her last few years in Eureka Springs, "where she carried on her fight" -- no surprise to regular Eureka Springs visitors, either.

"Her home known as Hatchet Hall was a boarding house for women that were victimized by drunken husbands," Moen wrote in the exhibit notes. "She is seen in [a] photo speaking to a large crowd at Basin Park. At the end of the speech she collapsed, and said, 'I have done what I could.'"

FYI — The museum is funded by memberships, donations, admissions and fundraisers, the most significant being “Voices from Eureka’s Silent City” held annually in October.