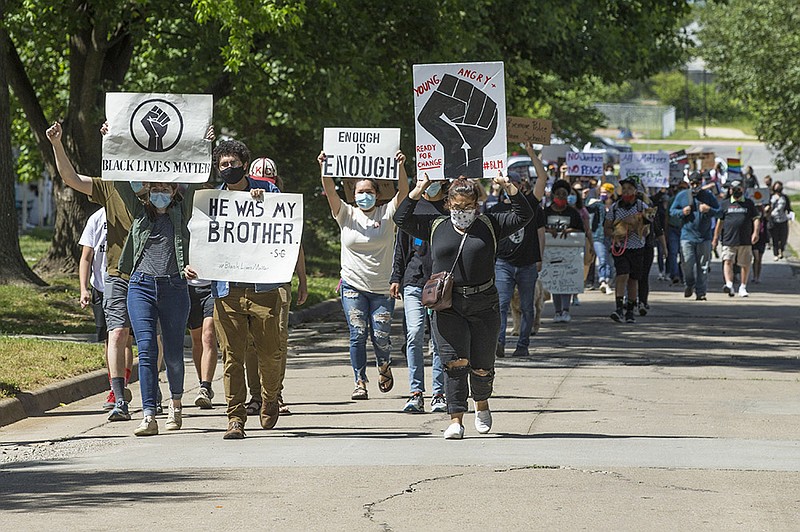 SPRINGDALE – Regional business and community leaders pledged Monday to address systemic racism in the area, spurred in part by the inequitable local impact of the covid-19 pandemic.

The Northwest Arkansas Council and Engage-NWA jointly announced the pledge initiative at the council’s semiannual membership meeting. The meeting was held online because of the pandemic. The council is a group of community and business leaders who focus on regional needs and goals. EngageNWA is a nonprofit group encouraging acceptance of the region’s increasingly diverse population.

The May 25 choking death of George Floyd while in Minneapolis Police Department custody and the nationwide protests sparked the council’s conversation that led to the resolution, council President Nelson Peacock said after Wednesday’s meeting.

The disproportionate effect of the covid-19 pandemic upon Marshallese and Hispanics in Northwest Arkansas accelerated it, he said.

The Hispanic and Marshallese communities combined amount to about 20% of the region’s population, according to U.S. Census figures. Yet a July 15 federal Centers for Disease Control study of the area found those two populations made up 64% of the confirmed covid-19 cases.

“The pandemic brought a lot of inequities to the forefront, and we need to work our way through it,” Peacock said. The council’s Health Care Transformation Division received $7 million in federal Coronavirus Aid, Relief and Economic Security Act on Monday for covid-19 contact tracing, testing and case coordination for the region’s Hispanic and Marshallese populations.

Mireya Reith, executive director of the immigrant rights group Arkansas United, said the pledge announcement comes two days after the state CARES Steering Committee awarded the $7 million to the group while Marshallese and Hispanic organizations with much more modest requests, the largest being for $1.5 million, got nothing.

“We know they’re sincere. I do believe the council is coming from a good place, and the intentions are there, but the practicing of what’s being preached is a little short,” Reith said. “The money went to a mostly white male business group without much question. That is systemic racism. That defines systemic racism.”

The council should have invited groups from the affected populations to be a part of the council proposal or supported the other projects. It isn’t just a matter of spreading money around equitably, but more a matter of cost effectiveness, she said. Fellow immigrants can engage immigrant groups effectively thanks to years of earned trust, she said.

The proposals put forward by Reith and others are not rejected, said Dr. Greg Bledsoe, state surgeon general and vice-chairman of the steering committee.

“The council’s proposal was approved because it had already been through the review process at the state Department of Finance and Administration and was ready to go. The other proposals are still in the review process.

“I can’t speak for the entire committee, but the Marshallese and Latinx communities are the most severely affected by this both medically and economically,” Bledsoe said. “We approved that council project because we wanted those problems addressed immediately.”

He added the council coordinated with other large groups such as the University of Arkansas for Medical Sciences and Arkansas Children’s Hospital and would served immigrants over a large area,” so large it would include Sevier County in south Arkansas.

Organizations in Northwest Arkansas are encouraged to adopt the anti-racism pledge and publicly display the language in their businesses and online to foster a welcoming environment for customers, employees and partners, the council said. Organizations can sign on to support the pledge by visiting nwacouncil.org/pledge.

“We support locally what we are committed to globally – doing our part to achieve greater equity and justice for everyone,” said council member Doug Mc-Millon, president and CEO of Walmart.

“We appreciate how the Northwest Arkansas community is working toward growing closer and more united, that together we are confronting the corrosive power of racism in a way we have never done before, and that we are setting an even higher bar for ourselves to be more inclusive – not just accepting our region’s differences, but celebrating them, every day.”

The best thing council members can do to address systemic racism in the region is improve working conditions in many of their plants, particularly in the poultry industry, said Magaly Licolli, co-founder of the worker advocacy group Venceremos.

“You cannot talk about racism without talking about class,” Licolli said. Working conditions, lack of opportunity for advancement and health concerns are all part of systemic racism, she said, adding “police brutality is just a symptom.”

The council also announced at the meeting goals for a regional arts advocacy group it established last year to aid the local arts economy. The group worked out its organization and adopted a name, the Creative Arkansas Community Hub and Exchange, or CACHE. Executive Director Allyson Esposito told the council of CACHE’s plans and of their activities to date, which include distributing $500,000 in grants among 24 nonprofit artistic and cultural organization in the region hurt by the pandemic.

Improving arts in the region is vital to attracting talent to the region’s businesses, she said.