Back in the saddle: New cyclist didn’t let injury stop her 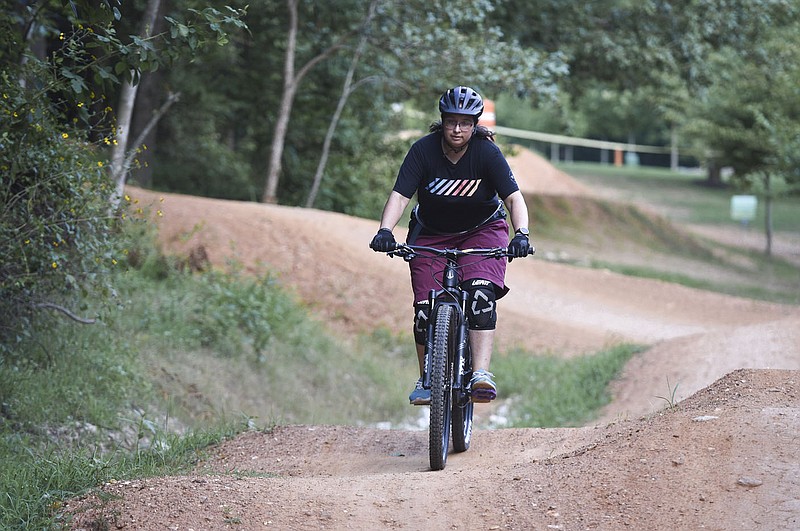 Sonia Perez rides, Monday, July 13, 2020 at Slaughter Pen trail in Bentonville. Perez is a beginning mountain biker who wanted to take advantage of the miles of soft-surface trails in the region. She recently purchased her first bike. Check out nwaonline.com/200717Daily/ for today's photo gallery. (NWA Democrat-Gazette/Charlie Kaijo)

Editor’s Note: Inspired by the creation of a YouTube cooking show by two area actors, this summer series of stories looks at hobbies people have undertaken — or continued to work at — while quarantined at home by covid-19. During July and August, we’re going to learn about bird watching, needle arts, dog training and who knows what else. Stay tuned!

Sonia Perez could have walked away from mountain biking, and no one would have blamed her.

Trying to take up the sport for the first time and learning literally on the fly, Perez borrowed a friend’s bike and took off on the dirt trails. Admittedly tired and not familiar with the terrain, she veered off the path and ended up in the back of an ambulance.

“I had a bad wreck,” Perez says almost a year later. “I was riding a bike a friend loaned me, and I was gassed and made some bad decisions and went down a grass hill because I thought that was where I needed to go. I should have waited and asked the person who was behind me where to go, but I didn’t. I took off and was way too far forward on the bike, and I hit a big divot. So when I hit that, I grabbed the brakes and went head over and landed on my shoulder. I couldn’t move.”

Perez was carted off the trail via ambulance and spent six months recovering from the shoulder injury.

She used that time to research and learn about mountain biking, making the decision to buy her own bike and climb back in the saddle when her shoulder healed, determined to join the thousands of shredders on the continuously growing single-track trails in the region.

“Six months later I was ready to ride again,” Perez says. “I took it slow.”

Perez, 30, is one of a growing number of adults flocking to the trails in Northwest Arkansas as new riders. Bike shop owners and big-box stores are selling out of bikes almost as fast as they get air in the tires, says Mojo Cycling owner Dave Neal.

Neal has owned the Bentonville shop for 11 years and is a longtime mountain bike rider who relocated from Colorado.

“Covid-19 has impacted bike sales, no question,” Neal says. “This is the 200-year flood. In the history of cycling, there has never been a rush like this. This has thrown everything for a loop. The bike inventory for 2020 was based on sales the previous year, so those factories are behind. With this 200-year floor situation, all the bikes for 2020 sold in six weeks, all the parts for the bikes sold in six weeks.

“Children’s bikes are selling like I have never seen in my life, way more than adult bikes, and I think it’s parents saying, ‘I’m going insane. I’ve got to get these kids out of the house.’”

Walking into a bike show or purchasing a bike can be a daunting thing, says Darrell Potts with Lewis & Clark Outfitters. There are so many different types of bikes for the different kinds of trails, like the paved Razorback Greenway or the dirt surface of the mountain bike trails.

Potts says bikes today are not like they were 30 to 40 years ago when they were passed down from older siblings to the younger ones.

“Biking is tough because it is so overwhelming to people,” Potts says. “There is a big gap between riding a bike as a kid and starting to ride again, which is where most people are. I’m going through this with a half a dozen friends on Facebook right now. It’s like a daily thing.

“The thing that goes wrong first is getting the wrong bike or getting a bike that doesn’t fit correctly. Unlike when you were a kid, as an adult, your knees, your back, your shoulders, your neck are going to feel terrible if you don’t take care of that first issue.”

Perez says she was drawn to mountain biking because of the abundance of trail opportunities, but she had very little knowledge of where to start.

“I grew up riding a bike, but I grew up in Southern Arkansas, so we did not have hills,” Perez says. “So I’d never done mountain bike trails until last year. Last summer I wanted to get into mountain biking because there are so many trails up here. I had one person that I knew that rode, but not many. I went to Lake Fayetteville a few times. I looked online on Bike Bentonville and all the groups, and I ran across the group called FAST — Friends of Arkansas Single Track — and I went there and did a ride with them and had a blast.”

Perez was riding a basic big box store-bought mountain bike when she took to the trails for the first time. She was later introduced to a new group of riders, the Women of Oz, and Perez says she felt an immediate connection.

She also knew she had to upgrade her equipment after experiencing the trails on a modern mountain bike, she says.

“One of the ladies in Women of Oz lent me her hardtail 29er,” Perez says. “So it had the wider handlebar, bigger wheels, higher tires. It was suited for the trails. I rode on that, and I felt 100 percent more confident. It made a huge difference.”

After recovering from the injury, Perez says she rented about six different bikes from a local shop to try and determine what bike fit her the best. She also spent time reading the various reviews of each bike.

“I began looking at the pros and cons of budget and bikes,” she says. “I just like to research things like that, whether it’s a printer, a microwave, a TV. I go all-in on the specs and the reviews. So bikes were something I definitely wanted to look into and read the reviews. The most important thing was how I felt on the bike. So I knew I had to go out there and ride.”

Neal says the only way to determine what bike is best for the rider is to just ride.

“A bike can look great on paper and you love it, but when you get on it, the geometry is off,” he says. “So we have you ride different bikes. We go over the strengths and weaknesses of the bikes. We let people make an educated decision. After they have ridden the bike and they feel comfortable, they leave with the bike. In 11 years of owning this shop, I have only had one bike returned. One.”

Perez credited the city of Bentonville’s bike program that allows new riders to rent a bike to get a feel for the trails. That allowed her to narrow her scope when it came time to make the purchase, she says.

Potts says one of the main things new bikers need to exercise is patience when first starting out.

“The biggest mistake people make over and over again, they decide they want to ride, they get their tires aired up, they have their buddy, and they go ride for an hour for the first time in 10 or 30 years,” Potts says. “And their butt hurts so bad, they never want to ride a bike again. And the stubborn ones who want to ride again come in and say, ‘I want a tractor seat for my bike.’

“The No. 1 thing we train on is, ride for 15 to 20 minutes on those first 10 rides. Spend a couple of weeks. You’re going to get a little sore. It’s just like doing sit-ups for the first time in 20 years. Your stomach is going to be brutal. But if you limit those first 10 to 15 rides, it solves 95 percent of all the problems. Even though we tell everybody that, they get on the Greenway and they are on their bikes for an hour then they hang it in their garage and never touch the bike again. If we can limit them at first, it’s our biggest challenge.”

For Perez, finding a riding group was essential to helping her get over the fear of rocks and roots and curvy switchbacks on the mountain bike trails.

“The Women of Oz is the group that got me really into mountain biking,” she says. “They offered a free skills clinic, they taught all the safety tips like level pedals, look ahead, shifting, braking, being in a ready position. They are all about getting women on mountain bikes.

“There are many groups like these out there. The biggest thing is to get with someone who leads the ride and who will take it slow.”

Chip Souza is the Sports editor for the Northwest Arkansas Democrat-Gazette.He can be reached at [email protected] or on Twitter @NWAChip. 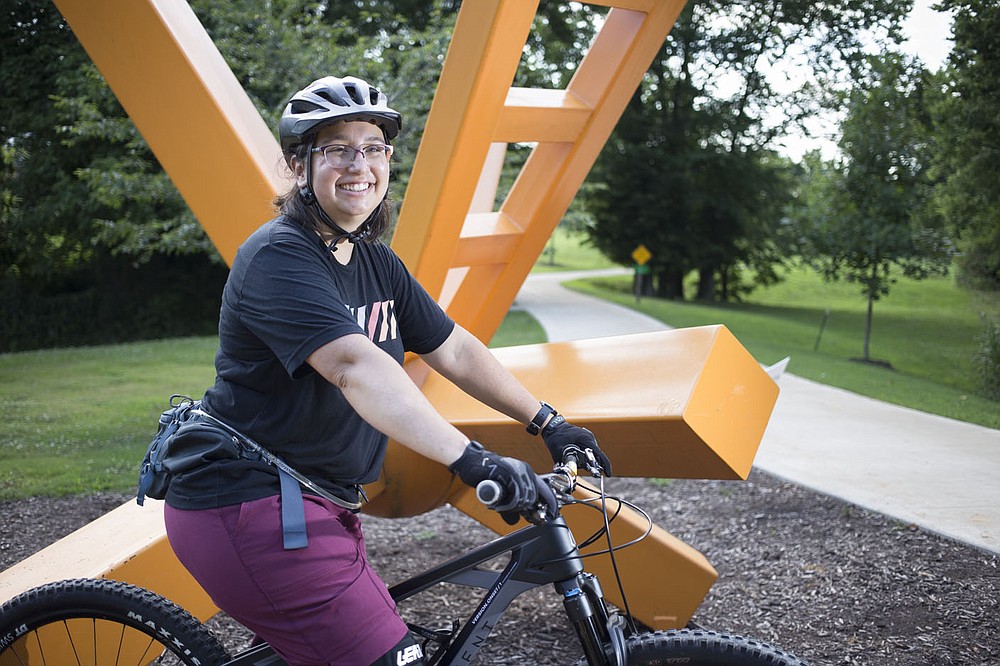 Sonia Perez poses for a portrait, Monday, July 13, 2020 at Slaughter Pen trail in Bentonville. Perez is a beginning mountain biker who wanted to take advantage of the miles of soft-surface trails in the region. She recently purchased her first bike. Check out nwaonline.com/200717Daily/ for today's photo gallery. (NWA Democrat-Gazette/Charlie Kaijo)
ADVERTISEMENT