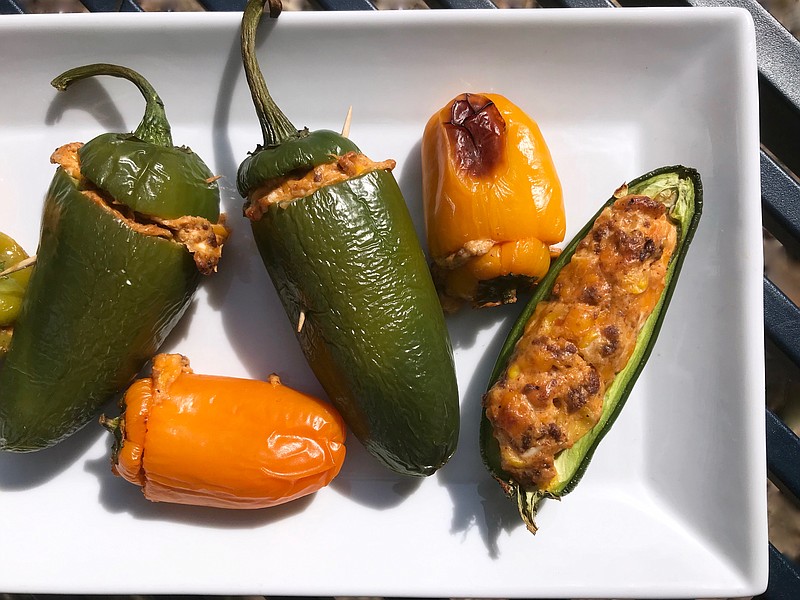 Pepper season is here and that means stuffed jalapenos at my house.

Part of the fun of eating stuffed jalapenos is the thrill of not knowing if the pepper's heat will be mild or make you sweat.

But I don't stop at jalapenos. Any pepper small enough to eat in a couple of bites is game for stuffing.

I like to use a combination of cream cheese and cheddar cheese. I add to the mixture based on how I'll be serving the peppers. If the peppers will be the meal, I'll add some seasoned ground beef or turkey and maybe even some corn. But if the peppers are a snack or appetizer, I stick with just cheese.

These stuffed peppers can be prepared in the oven or on the grill — the preparation and cooking time are the same for both methods, but if you're cooking these on the grill be sure your peppers are large enough they don't fall through the grate or use a rack to support them.

Depending on the size of the peppers I may leave them whole or cut them in half. For large peppers, I cut off the stem end, remove the ribs and seeds and stuff the filling and then replace the cap and secure with a wooden pick.

For these stuffed peppers I used a combination of sweet mini bell peppers and jalapenos from the supermarket and Cajun Belles from my garden.

8 to 12 large jalapeno or other hot peppers

4 to 6 slices bacon, cut in half crosswise, optional

To bake: Heat oven to 450 degrees. Place a wire rack in a rimmed baking sheet.

In a mixing bowl, combine the cheeses, seasoned meat (if using), corn kernels, the lime juice, cumin, garlic powder and black pepper. Using a sturdy spoon or an electric mixer, mix until well combined. Or, mix filling in a food processor and process until well blended. Transfer mixture to a pastry bag or a plastic storage bag and snip a corner off. Set aside.

For pepper halves, cut peppers in half lengthwise and remove and discard seeds and membranes. Lay peppers, cut side up, on the rack in the baking sheet.

If desired, wrap the filled peppers with a piece of bacon and secure with wooden picks.

Bake or grill peppers, turning frequently for 10 to 15 minutes, or until cheese is melted, peppers are tender and bacon (if using) is done.