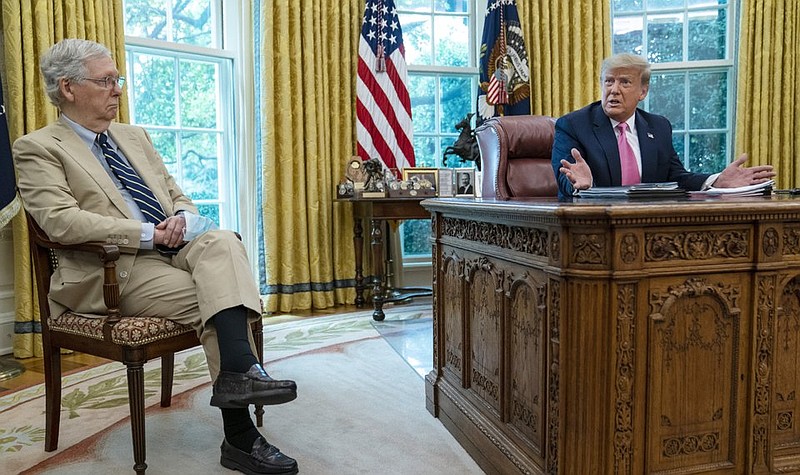 Senate Majority Leader Mitch McConnell of Kentucky listens as President Donald Trump speaks during a meeting in the Oval Office of the White House Monday in Washington.

WASHINGTON -- Republicans' opening proposal for the next coronavirus relief package will include $105 billion for schools, additional funding for a federal loan program for small businesses and another round of direct payments to American families, Sen. Mitch McConnell of Kentucky, the majority leader, said Tuesday.

"The American job market needs another shot of adrenaline," McConnell said. "Senate Republicans are laser-focused on getting American workers their jobs back."

Sketching out the contours of what is expected to be a $1 trillion plan, McConnell doubled down on his insistence that the package also include liability protections for businesses, medical workers, schools and businesses navigating the pandemic -- a proposal that Democrats oppose.

McConnell did not say whether the education funding in his bill would be conditioned on schools holding in-person classes in the fall, in line with President Donald Trump's demands, and made no mention of a payroll tax cut that the president has pressed to include. Nor did he mention how his proposal would address the expiration of enhanced unemployment benefits, which Republicans have made clear they intend to scale back.

"The legislation I have begun to sketch out is neither another CARES Act to float the entire economy nor a typical stimulus bill for a nation that's ready to get back to normal," McConnell said on the Senate floor, referring to the $2 trillion Coronavirus Aid, Relief, and Economic Security Act passed in March. "Our country is in a complex middle ground between those two things."

"Regretfully, this is not over," McConnell said after a private GOP lunch, urging Americans to learn to live with the new virus by wearing masks and practicing social distancing until a vaccine can be found.

Mnuchin said Monday that the goal was to keep the spending bill at about $1 trillion, but by Tuesday he had abandoned that mantra.

Republican senators and administration officials remain at odds over a number of key priorities of the president's, including tying new education funding to in-person classes, providing the payroll tax cut, and leaving out funds for nationwide testing and top health agencies as the pandemic continues to spread.

"We're all going to see if we can get on the same page," McConnell told reporters.

McConnell's package would send a fresh round of direct cash payments to Americans below a certain income level, likely $75,000 for singles, extend small-business loans under the Paycheck Protection Program and create a five-year liability shield against what he warns is a potential "epidemic" of coronavirus lawsuits.

It's also expected to include at least $105 billion for education, with $70 billion to help kindergarten-through-12th-grade schools reopen, $30 billion for colleges and $5 billion for governors to allocate.

The Trump administration wanted school money linked to reopenings, but in McConnell's package the money for K-12 would be split 50-50 between those that have in-person learning and those that do not.

Republicans want to replace the $600 weekly federal jobless benefit with a lower amount, to prevent the unemployed from receiving more aid than they would through a normal paycheck, party members said.

Trump wants a full repeal of the 15.3% payroll tax, which is shared among employers and employees, and funds Social Security and Medicare. Experts say that alone would cost $600 billion. At a White House meeting Monday, GOP leaders told Trump they preferred to include only a partial payroll tax cut.

The expanded jobless aid for the tens of millions of Americans laid off during the pandemic is set to expire at the end of the month, but a member of McConnell's staff privately told Senate officials during a conference call Tuesday that they expected the negotiations to be tumultuous and to stretch into early August, according to a person briefed on the conversation who insisted on anonymity to describe it.

The package is widely seen as lawmakers' last opportunity to address the pandemic with major legislation before the November elections.

Speaking with House Democrats on Tuesday morning in a private call, Pelosi said she hoped their side could resolve its differences with Republicans and produce a bill by the end of next week, according to an official on the call who described it on the condition of anonymity.

Top Democrats have shown no sign of budging from the $3 trillion stimulus package the House approved in May, and are now proposing more spending. In a speech Tuesday morning, Schumer said what Republicans were proposing would fall "drastically short" of meeting the country's needs.

While the House-passed measure would provide $100 billion for schools, Senate Democrats have now put forward a $430 billion plan for child care and schooling.

The Democratic leader sought to play up divisions between Senate Republicans and the White House, taunting that the two sides appeared to be united only in an interest to please "corporate interests" with tax breaks and liability protections. He said they should stop the infighting on a proposal that would never fly with Democrats anyway and start negotiating with his party.

"Right now the Republicans seem to want to play chicken with pandemic relief and string everyone along with a bill and a process we all know is doomed to fail," Schumer said.

Some Republican lawmakers were concerned about the growing size of the spending bill, debating over which policies to remove and warning that miscalculations could allow Democrats to seize control of the White House and the Senate in November.

Sen. Tom Cotton, R-Ark., urged other GOP senators to be attentive to what Republicans in competitive reelection bids are hearing on the ground from voters, and he made the case that if the GOP loses the majority, Democrats in control will implement policies that are much more costly to the national debt.

So spending a bit more money now in a rescue bill that would aid Republicans in their races would be cheaper in the long run, he argued. Cotton is also up for reelection in November but is not considered to be in a competitive race.

His viewpoint appeared to clash with that of Sens. Ted Cruz of Texas and Rand Paul of Kentucky, who warned against spending too much money on the package.

Cruz said the GOP should be focused on a safe restart of the economy and warned that if the economy remains shuttered in November, Democrats will win the White House and the Senate, and Republican senators, who usually meet in the ornate Mansfield room in the Capitol, will "be meeting in a much smaller lunch room."

Supporters of the package "should be ashamed of themselves," Paul said as he emerged.

Paul compared GOP backers of the spending to "Bernie bros" -- referring to the young supporters of Sen. Bernie Sanders of Vermont. "This is insane. ... There's no difference now between the two parties."

Sen. Rick Scott of Florida left saying it's wrong to "bail out" cash-strapped states. "Florida taxpayers are not going to pay for New York's expenses," he said.

"Republicans are in complete disarray," Schumer said. "Totally incompetent. Totally in disarray. Totally at war with one another."

"We haven't reached a conclusion on anything," Sen. John Neely Kennedy, R-La., said when the lunch ended.

Meadows acknowledged the discontent, telling reporters, "well as you can imagine, anytime you have Senate Republicans there, you have a number of different thoughts on what should or should not happen."

The White House and Senate Republican leaders had tried over the weekend to put together a joint deal to take to Democrats, but those efforts did not lead to a unified GOP position. Talks bogged down over Trump's insistence for the tax cut, something he has pushed since last year to force into law without any success.

Some also bristled at Trump's insistence for curbing coronavirus testing funds and a new requirement that aid to schools would be contingent on reopening plans.

"We're moving in the right direction on all fronts. ... We are making good progress," said Sen. Roy Blunt, R-Mo., a senior Appropriations Committee member, when asked about the disagreement over money for testing.

Participants said talks were ongoing and that nothing had been finalized.

White House spokeswoman Kayleigh McEnany said Tuesday that the White House is seeking "targeted" money for testing, and "we're willing to put in money for targeted testing that makes sense, not just dumping money into a pot that contains $10 billion."

Some experts said lawmakers should approve more money and have the administration send it out quicker.

[Video not showing up above? Click here to watch » https://www.youtube.com/watch?v=J1RSLW4gd9c]

"States have been using some of this money, but the problem is that it's not enough and easy for the states to draw down," said Sam Hammond, a policy expert at the Niskanen Center, a think tank that has been working with Senate Republicans on bolstering testing. "The scale of the problem will require a lot more money than they have so far."

Information for this article was contributed by Emily Cochrane and Nicholas Fandos of The New York Times; by Erica Werner, Jeff Stein and Seung Min Kim of The Washington Post; and by Lisa Mascaro, Andrew Taylor, Darlene Superville, Alexandra Jaffe and Padmananda Rama of The Associated Press. 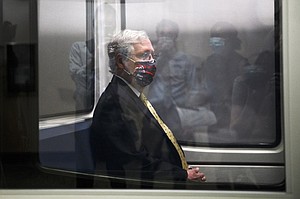 Photo by AP
Senate Majority Leader Mitch McConnell rides a Senate Subway car to a meeting Tuesday on Capitol Hill. McConnell said Ameri- cans should learn to live with the coronavirus, using precautions until a vaccine is developed. “Regretfully, this is not over,” he said. (AP/Jacquelyn Martin) 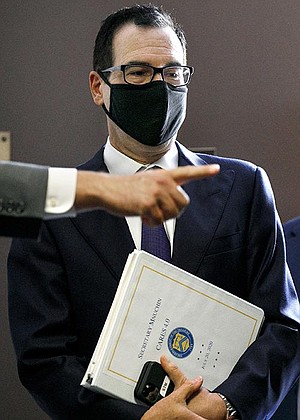 Photo by AP
“I think we’re going to spend what we need to spend, and we’re going to make sure we don’t spend more than that,” Treasury Secretary Steven Mnuchin said Tuesday after talks with congressional lead- ers from both parties. (AP/Jacquelyn Martin)