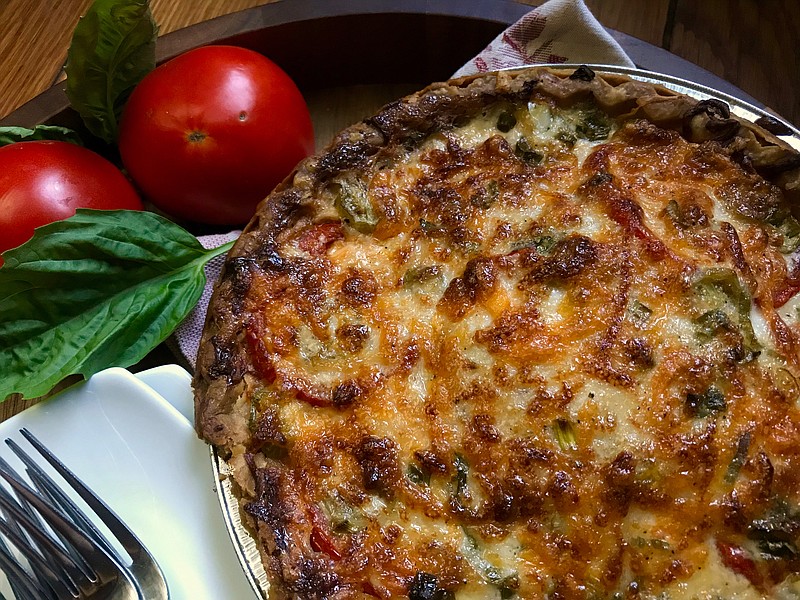 One needs no recipe for a tomato sandwich — not even a BLT — although if you've never had a German-style tomato sandwich on brown bread with butter in place of the mayonnaise, you've been missing out.

But for some tomato creations, a little guidance is helpful. Say, tomato jam or cheese-topped broiled tomatoes or tomato cobbler.

Tomatoes are a common staple among many world cuisines. Although that wasn't always the case. In terms of cultivated crops, tomatoes may be old, but their culinary uses are still relatively new. Food historians generally agree that Central and South Americans were cultivating tomatoes as long ago as 700 AD.

Europeans and American Colonists grew tomatoes as ornamental plants and for medicinal purposes according to Joanne Weir in "You Say Tomato."

However, tomatoes had to make the trip across the Atlantic and back again before they would become a popular food in what is now the United States.

The French, the Italians and Thomas Jefferson are largely credited with bringing tomatoes to the mainstream. References to edible tomatoes appear as early as 1827 in the Arkansas Gazette, but it was after the American Civil War that tomatoes really took off.

Spiced Tomatoes — As this is the season for securing a supply of this healthful vegetable, we commend to all housekeepers to put up some after the following recipe. By doing so, they may preserve them perfectly good until tomatoes come again:

Recipe for a bushel of Tomatoes.—Take your tomatoes and pour boiling water over them, skin them, then boil them well; after which, add a teacupful of salt, a tablespoonful of black pepper, one do. of cayenne, an ounce of cloves, an ounce of cinnamon, and an ounce of mace; mix well and put the tomatoes into small jars, run mutton suet over them, and tie them up, either with strong blue paper or buckskin. Prepared this way they will keep for a year.

The abbreviation do. stood for "ditto" and referred to the measurement in the line above in a column of type, and so this recipe calls for one tablespoon of cayenne.

Fun fact: Tomatoes are technically berries because they are fruits that encase more than one seed and come from flowers with only one ovary. Surprisingly, bananas are also berries under this definition. 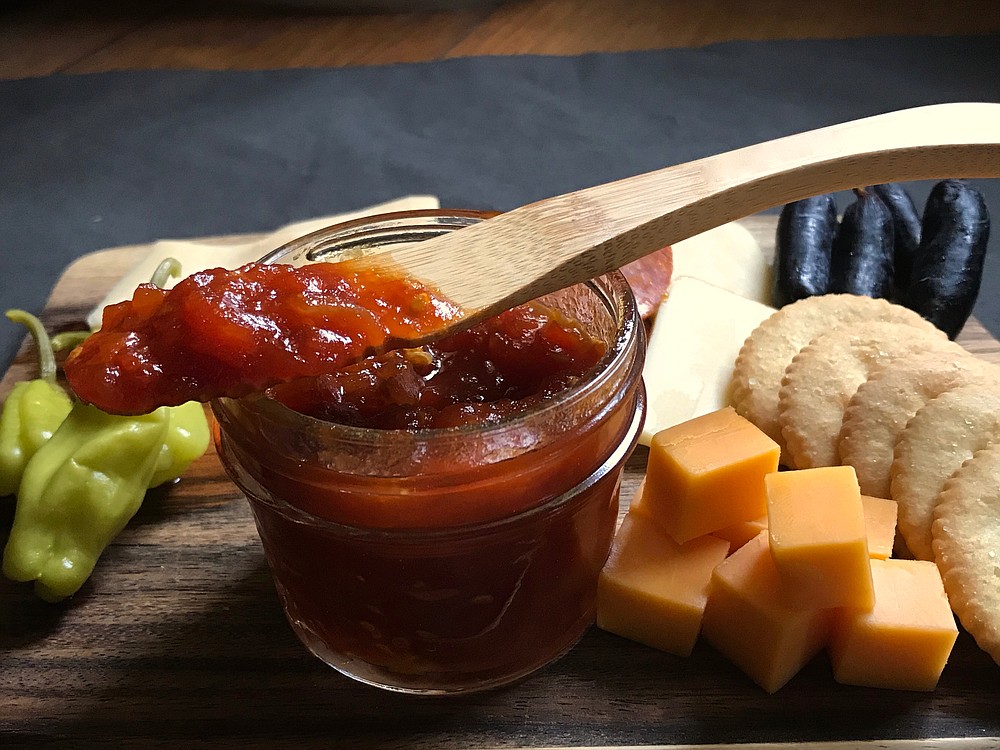 This jam is spicy and sweet in all the right ways. Try it slathered on grilled cheese sandwiches, with a charcuterie or cheese board or even on a sausage biscuit. If a smoother jam is desired, mince the onion and pepper or puree the mixture using an immersion blender before the evaporation is complete.

In a medium saucepan, heat the oil over low heat. Add the onion and cook until soft, but not brown, about 5 minutes. Add the bell pepper, red pepper flakes, paprika and salt; cook for about 2 minutes more. Stir in the tomatoes, vinegar and sugar. Bring to a boil, reduce heat and simmer, stirring occasionally, until most of the liquid has evaporated and mixture thickens to a jelly-like consistency, about 45 minutes. Transfer to a jar and refrigerate.

This tomato pie is best served warm, but I've been known to eat the leftovers straight from the fridge.

3 to 4 cups sliced tomatoes, preferably a combination of red and green

Place tomato slices in a single layer on a wire rack set over baking sheet; sprinkle with salt. Let stand/drain for 15 to 30 minutes. Pat dry with paper towels.

Place the pie crust in a 9-inch pie pan, the deeper the better. Prick all over with a fork. Flute the edges, if desired. Line crust with parchment paper and fill with dried beans or pie weights. Bake until lightly golden brown, about 10 minutes.

Remove the crust from the oven, but leave oven on. Remove weights and parchment paper. Let crust cool slightly. Layer half the tomato slices on the bottom of the crust. Season with salt and pepper.

In a small bowl, combine the basil, green onions and garlic. Sprinkle half of the basil-onion-garlic mixture evenly over the tomatoes, followed by half of each cheese. Repeat layers.

Spread the mayonnaise evenly over the entire pie. Bake until golden, about 30 minutes. Let cool for at least 5 minutes before serving.

Use any tomato you like for this recipe. It can even be made with canned tomatoes.

Salt and black pepper, to taste

In a large oven-safe skillet, preferably cast-iron, melt the butter over low heat. Once melted, remove from heat.

In a bowl, mix together the ﬂour, cornmeal, baking powder and salt. Add the milk and stir until a thick, smooth batter forms. Pour the batter over the melted butter in the skillet. Do not stir. Spoon the tomato mixture on top of the batter. Bake for 30 minutes, uncovered.

Adapted from "The Homesick Texan Cookbook" by Lisa Fain 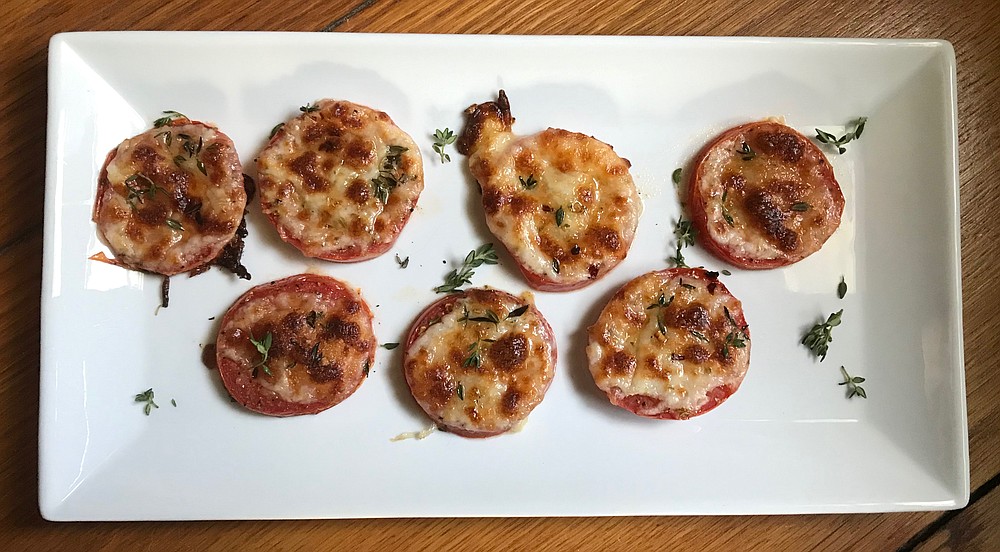 Line one or two rimmed baking sheets with parchment paper.

Arrange tomato slices on the prepared baking sheet(s) in a single layer. Season each slice with a little salt and pepper.

In a bowl, combine the mozzarella and parmesan cheeses. Divide cheeses among tomato slices. Sprinkle desired herbs or seasonings over cheese. Drizzle lightly with olive oil.

I was hesitant to include two cobbler recipes in this story, but this recipe is so different from the other. Lisa Fain's tomato cornbread cobbler really is more like cornbread. This one features a biscuit crust and Mediterranean-leaning flavors of ricotta, thyme and sherry.

2 ½ cups PLUS 2 tablespoons cake flour or all-purpose, plus more for dusting

1 cup buttermilk, plus more for brushing

Prepare the ricotta: Strain the ricotta in a cheesecloth or fine-mesh strainer for at least 30 minutes. When it's ready to use, squeeze to get rid of any excess moisture.

Prepare the ricotta biscuits: Put 2 ½ cups flour, 1 tablespoon sugar, 1 teaspoon salt, the baking powder and baking soda into a large bowl and whisk to combine. Transfer to the freezer to chill for about 20 minutes. Add the butter to the bowl and using your fingers, rub the butter into the flour mixture until no large pieces remain. Make a well in the center and gradually pour in 1 cup buttermilk while using a fork to fluff in the flour from the sides of the bowl until you form a shaggy-looking dough. Crumble in the ricotta and loosely incorporate with your fingers.

Scrape the dough onto a lightly floured surface and use your hands to shape it into a roughly 4-inch-by-6-inch rectangle. Fold into thirds and flatten back to the same size with your hands; repeat two more times, flattening the dough out until about 1-inch thick. Refrigerate the dough for 20 minutes.

Position a rack in the center of the oven, and heat oven to 350 degrees. Cut about half the tomatoes in half. In a 2-quart baking dish, combine all the tomatoes, olive oil, vinegar and thyme sprigs with the remaining 4 tablespoons sugar and 2 tablespoons cake flour. Season generously with salt and pepper, and let sit while you prepare the biscuit dough.

Lay the biscuit dough out onto a lightly floured surface. Cut into 2-inch squares or circles and arrange in a single layer over the tomatoes -- you should have around 10 to 12 biscuits. Roll and cut scraps, or just bake the scraps separately to snack on. Brush the remaining 2 tablespoons buttermilk on top of the biscuits, and bake for 45 minutes, until the tomato mixture has bubbled up and the biscuits are browned on top. Allow to cool, and serve warm or at room temperature, finishing with a sprinkle of salt and pepper.