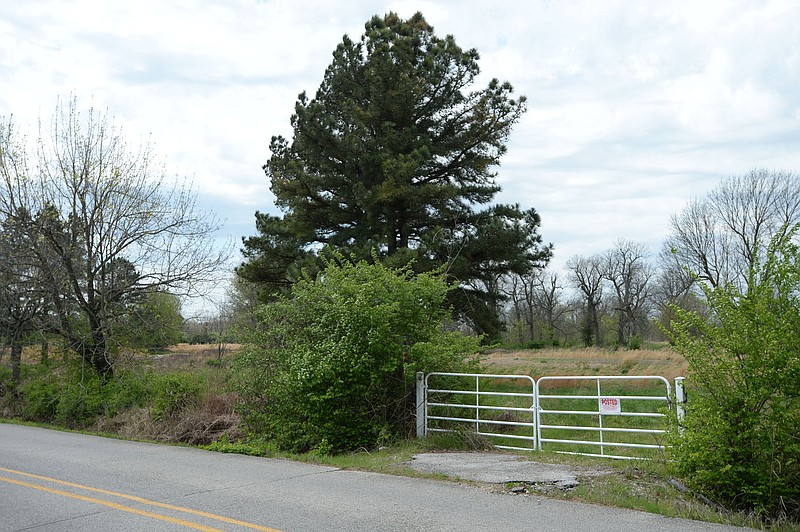 A gate stands Thursday, April 2, 2020, at the northern end of the former Razorback Park Golf Course on Deane Solomon Road in Fayetteville. The Fayetteville parks board on Monday will consider whether having about 65 acres at the site dedicated as a park is suitable for the area. Visit nwaonline.com/200405Daily/ for today's photo gallery. (NWA Democrat-Gazette/Andy Shupe)

The council unanimously approved a rezoning plan associated with the proposed Underwood Park. It voted the same way for a land swap deal with the University of Arkansas involving a portion of Markham Hill.

In the first vote, about 65 of 130 acres west of Deane Solomon Road and north of Mount Comfort Road will be dedicated as a new park. In addition to the park, about 28 acres will have apartments, up to 602 units. Another 34 acres is zoned for offices and businesses. A large pond near the center of the property would remain.

The land is the site of the former Razorback Golf Course. Craig and Laura Underwood bought it in 2017 for $1.4 million. The Underwoods initially thought they would hold onto the land for a number of years, Craig Underwood said. Recognizing a lack of park land on the west side of town sped up the process, he said.

Past development proposals at the site prompted unified opposition from neighbors in 2016. The property was rezoned at the end of 2016, but has since remained dormant.

Craig Underwood said he contacted city officials, neighbors and local land experts to determine the best use of the property. The idea is to have a higher density of residential use in a smaller portion of the land to provide a larger area for the park, he said.

The previous zoning would have allowed 400 homes spread throughout the property, with fewer acres for a park.

Only parks board member Keith Tencleve spoke to the council during public comment. The meeting was held online via Zoom.

"There's a big need in west Fayetteville for a park of this nature -- a community park that really serves the people of this area," Tencleve said.

Council Member Kyle Smith said he felt the proposal represented a "fantastic" compromise between city officials, neighbors and the developers.

"It's going to be an incredible asset to the city," he said.

In the second vote, the council agreed to swap the city's 10-acre Indian Trail property at Razorback Road, south of Martin Luther King Jr. Boulevard, for about 62 acres at the western slope of Markham Hill from the university.

Susan Norton, chief of staff to Mayor Lioneld Jordan, said the city plans to preserve the acreage and the decades-old soft-surface trails that run through the Markham Hill property. The move ties in with the city's energy and green network goals, she said.

The university has been leasing the Indian Trail property from the city for about 25 years. Mike Johnson, the university's facilities manager, said the plan is to build 12 tennis courts on the flat, northern part of the property for student recreational use. A network of soft-surface trails at the woodsy, southern end would be accessible to the public, he said.

"This is about as big a win-win as we could come up with, and there's no money being exchanged," Johnson said.

In other business, the City Council affirmed the appointment of Marti Sharkey as the city's new public health officer. The council created the position when it re-established the city's board of health last month to advise administrators during the pandemic.

Sharkey is a pediatrician with a background in infectious diseases. The board will direct Sharkey's responsibilities, which can change over time as the pandemic progresses. The board has $50,000 available to work with from the city's emergency fund.

• Rezoning a handful of lots on Hendrix Street from four residential units per acre to 18.

• A pair of contracts associated with construction work to improve Zion Road from Vantage Drive to Crossover Road.

A rezoning request from Sigma Phi Epsilon for a lot on Arkansas Avenue was tabled indefinitely.