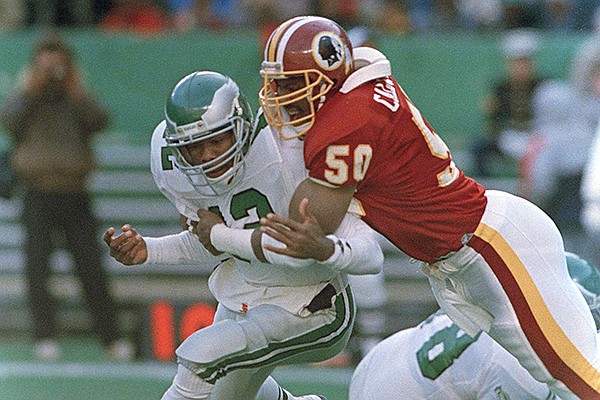 FORT SMITH -- When former coaches and teammates talk about Ravin Caldwell, the first thing they remember is a teammate who always wore a smile.

Caldwell, who starred as a linebacker at both Fort Smith Northside and the University of Arkansas, was a happy warrior in high school, college and the National Football League.

"Ravin was not only a great athlete, but a great friend and someone every one of us enjoyed being around," former Northside and Razorback teammate Andy Upchurch said. "He's just a very funny guy with an infectious laugh.

"I had not seen him in several years and ran into him at a Razorback Letterman's event a couple of years ago. Immediately, it was just like old times."

When Joe Fred Young became head coach at Northside in the spring of 1981, he saw the same smile.

"He was a joy to work with," Young said. "Everything he did he was happy about it. He never showed up without a smile on his face. He was probably as happy a football player that I have ever been around. He just loved what he was doing."

Caldwell said there was no secret to his happiness – he just loved the idea of competitive sports.

"It was a joy to play," Caldwell said. "No matter the sport – football, basketball and track – I loved to compete. If you put an opponent in front of me, it was like "OK, let's see who's the better man here."

Another reason that Caldwell was happy on the field was because he had been up since before daylight working on chores his father expected to be done. Ravin Caldwell Sr., who died in 2017, worked in construction and taught his children a strong work ethic.

"I was up at 4 a.m. to feed the hogs or mow the grass ... these chores had to be done before I could go to practice," Caldwell said. "No question, I got my hard work ethic from my dad. He taught me that."

Upchurch, who played with Ravin and his older brother Phil at Northside, said their father set the example.

"He and Phil (his older brother) were tough as nails," Upchurch said. "I think their dad played a big role in that. He had a great family."

Caldwell came to Northside at the right time as its football fortunes had slipped in the mid-to-late 1970s. The Grizzlies were 4-17-2 in the two seasons previous to Caldwell moving up from Kimmons Junior High. Worse than that, Northside had not beaten city rival Southside in the last three seasons (an 0-2-1 record).

"My older brother (Phil) was three years ahead of me and it seemed like it was always up-and-down," Caldwell said. "They struggled against Southside. One of the things I am proud of is that we swept Southside in football."

Caldwell's class would become the first group to sweep Southside in nearly a decade. His junior year, the Grizzlies shared the Class AAAAA title with Little rock Central (the teams played to a 7-7 tie late in the 1980 season), while his senior season Northside played for the Class AAAA state championship but lost to Jacksonville 19-12.

"There is no question that we began to turn things around during that period," Caldwell said. "You saw it from those upperclassmen when I was a sophomore and junior. It had been a while since Northside had won a state title and we had a chance to win two. For us to get one was amazing."

Caldwell played linebacker and running back in junior high, but mostly a linebacker in high school. Young did insert Caldwell at tight end in 1981 and he scored a couple of touchdowns that season.

"They would put me in for situations – to run a certain play or run a certain route," Caldwell said. "It was sporadic, but it was just something to help the team. Honestly, I liked playing linebacker because I would rather hit someone than get hit."

Young said it did not take long to figure out where Caldwell belonged on the field.

"When we got started in the fall, he shows up and you knew right away that he was a great athlete," Young said. "He's 6-3 and 190 pounds and could run (a 4.6 40). He was built for playing football – he had the height and speed. Once we saw him move and work, we knew his position middle linebacker. He had the frame, he just needed to mature into it.

"He really flourished playing middle linebacker. It freed him up to roam and find the football. And boy, did he do it. He had a nose for the football. It's not something you can coach. Those type of guys play so well because they know how to get to the football. He made tackles from sideline to sideline."

Caldwell said he loved going to where the ball was and making the play.

"In junior high, they put me in the middle and said, 'Ravin, go to the football.' I was a ball hog," Caldwell said. "In high school and college, I learned that there was more to being a linebacker. You had to read your keys, then go to the ball. Once you see it and keep seeing what the offense is doing, you get a knack to what is coming and what you have to do. Always keep your eyes where the ball was going."

"The leader of that (1981) team was Ravin," Young said. "The kids looked up to him. Everyone liked him. There is nothing negative that anyone could say about him."

At Arkansas, he lettered four years and was a starter for three seasons.

His junior season (1984) was his breakout season at Arkansas. Moving to a standup defensive end position at 230 pounds, he finished with 65 tackles (10 of those for 57 yards in losses) as well as causing four fumbles, recovering three others and breaking up seven passes. The Hogs led the Southwest Conference in defense that year.

Though he missed some time with an injured knee, he still contributed on the 1985 Arkansas team that went 10-2 and won the Holiday Bowl.

From there, he was drafted in the fifth round (113th overall) by the Washington Redskins in the 1986 draft. Caldwell would play a reserve role on defense and special teams in helping Washington win Super Bowl XXII (1987 season) and Super Bowl XXVI (1991 season).

"I was injured my senior year (at Arkansas) and several NFL teams brought me in to look at my knee," Caldwell said. "One of the teams that did not was the Redskins, yet they drafted me in the fifth round. Coach (Joe) Gibbs told me that he and coach (Don) Breaux had coached at Arkansas.

"I was fortunate to play for some two great college coaches in (Lou) Holtz and (Kenny) Hatfield and then in the NFL with coach Gibbs."

Today, Caldwell lives in Virginia and works on the property title insurance for Gary Clark Inc. Caldwell also helps run football camps and clinics for youth in the District of Columbia area.

CREDENTIALS A three-year starter at Northside High School at defensive end/linebacker. … Led the Grizzlies to a Class AAAAA co-championship in 1980 and the Class AAAA championship game in 1981. … Was named to the AP Super Team as a linebacker in 1981 and played in the 1984 AHSCA All-Star Game. Was a four-year letterman at the University of Arkansas. … Was a three-year starter at defensive end/linebacker and played in three bowl games. The 1985 Razorbacks finished 10-2 and beat Arizona State in the Holiday Bowl. He was drafted in the fifth round (113th overall) by the Washington Redskins in the 1986 NFL Draft. In his seven-year career in Washington, Caldwell played on two Super Bowl-winning teams in 1987 (Super Bowl XXII) and 1991 (Super Bowl XXVI). … Caldwell is a Vice President at Gary Clark Incorporated dealing with real estate title insurance. Clark was a teammate of Caldwell with the Redskins.

THAT’S WHAT HE SAID “I didn’t go to many (Northside) games before my brother started playing, so I didn’t have an appreciation for the athletes that came through there before me – Benny Sheperd, Almer Lee, Billy Joe Releford, Ivan Jordan and my brother. Some of them transitioned from Lincoln High (the segregated black high school in Fort Smith). They paved the way for me.”