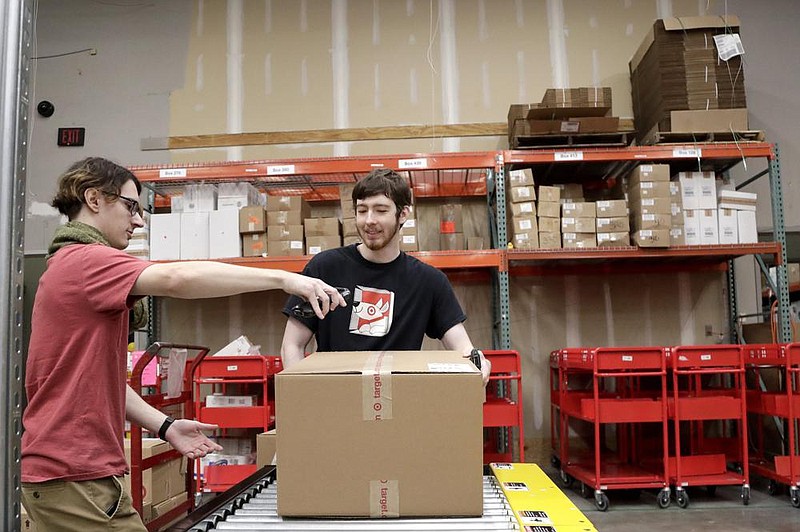 Target employees in Edison, N.J., sort online orders for shipping in this file photo. Demand for delivery has grown as people avoid visiting stores and restaurants during the pandemic. (AP)

She'd spent time at Petco texting pictures of litter boxes to a customer whose cat had just had surgery. All in all, the drive to the store, gathering pet supplies and checking out took 53 minutes. It took Johnson-Dorsey 15 minutes more to drop off the delivery.

After more than an hour of work, she checked the app. She had earned $8.92.

Between the low pay and the risk of exposure to the coronavirus, the job just wasn't worth it, she decided.

Drivers for Shipt say the company's gradual shift to a new pay algorithm has lowered their earnings by 30%, and, for some, up to 50%. Workers across the country protested last week, calling out from the job and imploring customers to boycott the company. Workers are seeking a return to a commission-based pay model they say was more transparent and enabled them to earn a more livable wage.

The new pay algorithm is now in about 50 metropolitan areas, Shipt spokesperson Molly Snyder said. Shipt plans to implement the pay structure companywide in the coming months. California markets have always operated on this model because Shipt didn't operate in the state until after Target acquired the company in late 2017.

Demand for delivery has grown amid the pandemic as people avoid visiting stores and restaurants for fear of contracting or spreading the coronavirus. The new health risks for front-line workers have spurred independent contractors for delivery apps, including Shipt and Instacart, to demand more protections and pay.

Shipt says the new pay structure is meant to benefit drivers and takes multiple factors into account, including traffic, time of day and how many items an order involves.

"Those are the factors we think about as we build out an effort-based model," Snyder said.

But many Shipt workers say the commission-based pay model, which paid $5 plus a 7.5% commission on all orders, was more reliable. Drivers have been fighting the transition for months, calling out from the job in early April to demand the company provide more pay and personal protective equipment.

Trips available for drivers often offer pay far below minimum wage, shoppers said. An order for 45 items at a Target in Murrieta that was estimated to require one hour and five minutes offered a pay of $5 to $7, according to a screenshot reviewed by The Times. Another shopper was paid $28.55 on an $822 order of 179 items.

Details of the pay structure and workers' fear of retaliation for speaking out about their grievances were first detailed by Vice in February.

Snyder said that under the new pay algorithm, it's possible that some trips would yield less pay than under the commission model, depending on the time of day and the market. Snyder said that because shoppers are independent contractors, they choose how much they work and when they work. She said the company provides information shoppers need to make informed decisions, including an order's number of items and estimated pay.

Shipt shoppers such as Johnson-Dorsey are finding that it's simply not worth it to continue working for Shipt.

"I've been a Shipt member for about a month but have yet to take my first order. I don't see how you make money? The orders I get don't seem worth it at all, am I missing something?" one user posted to a Facebook group for Shipt workers, attaching a screenshot of an order of 16 items that estimated a 40-minute delivery with estimated pay of $8 to $10.

Complaints about pay in Facebook groups for Shipt workers have been surging.

"No way. An hour of work plus delivery for 7 bucks?" one worker posted in the Shipt Shopper Lounge, according to a screenshot reviewed by The Times.

"Bring back v1 pay!" another user posted, with a broken heart emoji.

Transparency is a huge concern, said Willy Solis, a Shipt delivery worker in Dallas who helped organize shopper protests. It's unclear how the new pay algorithm calculates these low numbers, whereas the commission model was clear.

Snyder said the company has never directly disclosed how it calculated pay on the commission-based model. The calculation of $5 plus a 7.5% commission quoted by drivers is an estimate that drivers determined on their own, Snyder said.

However, documents reviewed by The Times indicate Shipt was the source of that information. An old Shipt guide to driver's pay said, "Shoppers are paid $5 per order plus 7.5% of the receipt total. Customers can tip as well, either in the app or directly to you!" A pay stub from 2017 offered the same description.

Solis said that as the new pay structure has been rolled out, more shoppers are joining protests. Shipt said Wednesday's protest -- scheduled to coincide with the rollout of the algorithm in 12 metropolitan areas -- did not affect order volume or worker availability.

Johnson-Dorsey has other grievances with Shipt beyond the pay structure. She doesn't understand why Shipt, which is owned by Target, doesn't provide its workers with benefits that Target employees receive, such as additional leave of 30 days for vulnerable employees with underlying health risks during the pandemic. Target spokesperson Konnor Schmaltz outlined benefits for Target employees but did not answer questions about why Shipt employees did not receive the same benefits.

Snyder said shoppers' status as independent contractors determines whether they are eligible for such benefits. A California labor law that went into effect in January could alter that status, forcing companies to provide employee benefits. Companies such as Instacart, Lyft and Uber have been fighting the law.