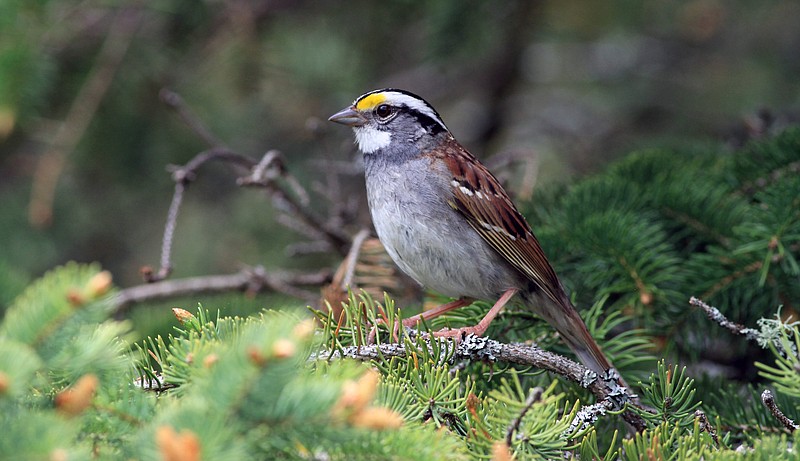 An undated photo provided by Scott M. Ramsay shows a white-throated sparrow. Over 20 years, scientists have tracked the transformation of the bird's traditional trill from western Canada to Ontario. (Scott M. Ramsay via The New York Times)

Even if you're not a bird person, you probably know the jaunty song of the white-throated sparrow. It plays on loop in North America's boreal forests, a classic as familiar as the chickadee's trill and the mourning dove's dirge.

But over the past half-century, the song's hook — its triplet ending — has changed, replaced by a new, doublet-ended variant, according to a new paper published in Current Biology. It seems the sparrows want to sing something new.

The study, which took 20 years, is "the first to track the cultural evolution of birdsong at the continental scale," said Mason Youngblood, a doctoral candidate in animal behavior at the CUNY Graduate Center who was not involved in the research. It describes a much broader and more rapid shift in birdsong than was previously thought to occur.

Scott Ramsay, a behavioral ecologist at Wilfrid Laurier University in Ontario, was the first to notice that the forest sounded a little off during a visit to western Canada with Ken Otter, a professor at the University of Northern British Columbia.

"He said, 'Your birds are singing something weird,'" Otter said.

It was "a different kind of syncopation pattern," Otter said.

By tracking the western Canadian birds with geolocators, they found that some of them spend their winters in the southern United States, where they overlap with birds from other places. They're probably sharing the song there.

The possibility that the birds are swapping songs on their wintering grounds "really opens up how we think of song learning," said Dana Moseley, an ecologist at James Madison University in Virginia who was not involved in the study.

What's happening with the sparrows is "kind of like an Australian person coming to New York, and all the New Yorkers start suddenly deciding to adopt an Australian accent," Otter said.

It's unclear why the doublets are so popular. Otter and his colleagues think it has to do with the female sparrows, who may enjoy a little novelty.

Donald Kroodsma, a birdsong expert who was not involved in the study, agreed, pointing to previous work showing that certain populations of chestnut-sided warblers shuffle rapidly through songs that have to do with mating while keeping fight songs mostly the same. "The speculations by the authors are appropriate, it would seem," Kroodsma said. "But only the birds know."