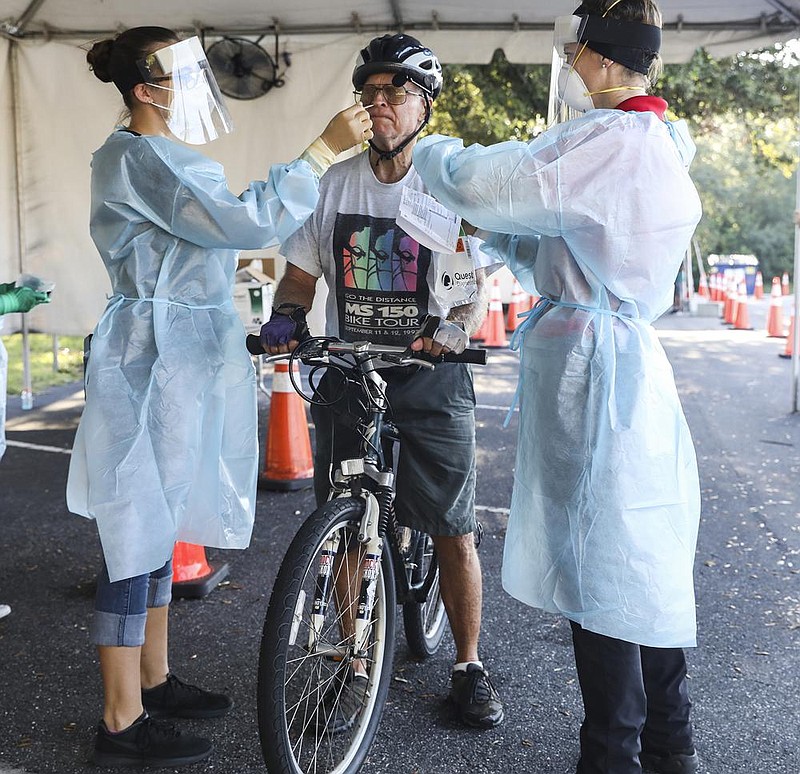 WASHINGTON -- The resurgence of the coronavirus in the United States intensified the debate Monday about whether to reopen schools, as global health officials warned that the pandemic will intensify unless more countries adopt comprehensive plans to combat it.

"If the basics aren't followed, there is only one way this pandemic is going to go," said the director-general of the World Health Organization, Tedros Adhanom Ghebreyesus. "It's going to get worse and worse and worse."

Debates over the risks the virus poses, and how best to fight it, were spotlighted in Florida after its 15,000 newly confirmed cases Sunday broke the record among U.S. states for the largest single-day increase. The state reported 12,624 new cases on Monday.

Officials and health experts in hard-hit Miami pushed back against pressure, both from Gov. Ron DeSantis and President Donald Trump, to get students back to classrooms next month.

"We just absolutely cannot risk the health of children, their well-being and safety, or any of our colleagues," said Karla Hernandez-Mats, a middle school teacher who serves as president of the United Teachers of Dade union. "We're probably going to have to go to a full shutdown mode. I can't see the schools reopening except with the 100% virtual model."

Parents have until Wednesday to notify the Miami-Dade School District of their decisions on whether they will send their kids to school this fall or have them study online from home.

"Children can get the virus in their bodies and get contaminated just like anybody else," said Florida International University epidemiologist Dr. Aileen Marty, who has been advising the school district on its reopening plans.

DeSantis has argued that children have not proved to be vectors for the disease and that if retailers can be reopened safely, then schools should be able to as well. But he made those arguments with the caveat that each county should make its own decision on reopening in consultation with local health officials.

The debate is hardly limited to Florida.

"When I visited schools this morning, I knew we were doing the right thing for children," Superintendent Nikolai Vitti said in a post on Twitter.

"COVID is not going away. Many of our children need face-to-face, direct engagement," he said.

Officials in California's two largest school districts, in Los Angeles and San Diego, announced Monday that students will stick to online learning from home when school resumes next month, rather than return to classrooms.

The districts cited research about school safety experiences from around the world, along with state and local health guidance.

Shortly after the districts made their announcement, California Gov. Gavin Newsom expanded shutdowns of bars and indoor dining statewide. He also ordered gyms, churches and hair salons closed in most places.

In New York, Gov. Andrew Cuomo said schools will be allowed to reopen in parts of the state where infection rates average 5% or less for two weeks. Students and teachers will be screened for illness, and they must wear masks and keep 6 feet apart when possible.

"Common sense and intelligence can still determine what we do even in this crazy environment," Cuomo said. "We're not going to use our children as guinea pigs."

In North Carolina, which reported its highest one-day numbers of cases and hospitalizations, Gov. Roy Cooper has asked school districts to prepare three reopening plans that include options for in-person and fully remote learning. His decision is expected later this week.

But teacher Becky Maxam, whose husband is considered high-risk for serious complications from the virus because of a genetic heart condition, said she doesn't plan to return if her Charlotte middle school reopens.

"I'm not going back if we're opening up. I can't risk my family," Maxam said. "I think we should be virtual until we find a vaccine or cases go down much more than what they are."

The Trump administration's push to reopen schools is being complicated by a split within it ranks over how to do it, with some advisers advocating for a large federal expenditure to make campuses safe as Congress compiles the next covid-19 relief bill.

[Video not showing up above? Click here to watch » https://www.youtube.com/watch?v=dqVWpQohJHo]

Senate Majority Leader Mitch McConnell, R-Ky., said Monday that schooling will be a priority in the coming package. Senate Democrats have proposed a $430 billion education stabilization plan. But the Republican leader has not said how much Congress is willing to spend, wary of high-dollar outlays that will run into resistance from GOP senators.

"We can't have a normal country unless kids are back in school," McConnell said during a hospital visit in Kentucky.

Trump and Education Secretary Betsy DeVos want schools up and running in the fall, part of a broader effort by the administration to continue reopening the country despite record-breaking numbers of new covid-19 cases in several states.

White House economic adviser Larry Kudlow said the president would be willing to consider increasing funding for state and local governments that reopen schools this fall.

"I think the president would be willing to consider additional funding for state and local governments if the schools do reopen, so that's perhaps an incentive," Kudlow said Monday in an interview with Fox News.

Last week, Trump threatened to cut funds for schools that don't fully reopen. The Centers for Disease Control and Prevention is expected to release updated guidelines this week.

House Speaker Nancy Pelosi, D-Calif., said Monday that Congress needs to show Americans the country will "put children first" by ensuring enough money to make campuses safe. Democrats already approved $100 billion for education in the Heroes Act, which is stalled in the Senate.

"Without the resources, we shouldn't even be thinking about sending them back to school," Pelosi said on MSNBC.

Congress is set to resume work next week as lawmakers begin negotiating the next aid package. This would be the fifth in response to the coronavirus pandemic. Congress has already approved $3 trillion in aid since the start of the outbreak in the U.S. earlier this year.

Elsewhere, a study by the nonpartisan consumer advocacy group Families USA will announce today that an estimated 5.4 million American workers lost their health insurance between February and May, a stretch in which more adults became uninsured because of job losses than have ever lost coverage in a single year.

The study, reported by The New York Times, found that the increase in uninsured workers from February to May was nearly 40% higher than the highest previous increase, which occurred during the recession of 2008 and 2009, when 3.9 million adults lost insurance.

"We knew these numbers would be big," said Stan Dorn, who directs the group's National Center for Coverage Innovation and who wrote the study. "This is the worst economic downturn since World War II. It dwarfs the Great Recession. So it's not surprising that we would also see the worst increase in the uninsured."

Families USA is one of a number of groups trying to estimate the number of people who have lost insurance during the pandemic; definitive data will not become available until mid- to late 2021, when the federal government publishes health insurance estimates for 2020. The analyses vary, but all reach the same grim conclusion: The number of people lacking insurance is quickly climbing.

The nonpartisan Kaiser Family Foundation has estimated that 27 million Americans have lost coverage in the pandemic; that study took into account family members of the insured. Another analysis, published Monday by the Urban Institute and the Robert Wood Johnson Foundation, projected that by the end of 2020, 10.1 million people will no longer have employer-sponsored health insurance or coverage that was tied to a job lost because of the pandemic.

Also Monday, Tedros admonished some government leaders for eroding public trust by sending mixed messages on the coronavirus. He warned that their failures to stop their countries' spiraling outbreaks mean there will be no return to normal "for the foreseeable future."

The WHO chief did not call out specific politicians for criticism but said that "too many countries are headed in the wrong direction" with the pandemic and that some were not taking the proper steps to curb infections.

At the same time, Tedros acknowledged how difficult it was for governments to respond effectively, given the economic, social and cultural consequences of imposing restrictions.

"The virus remains public enemy No. 1, but the actions of many governments and people do not reflect this," he said.

In Japan, more than 30 Marines tested positive at the Futenma U.S. air station on Okinawa, where infections among American service members have rapidly risen to more than 90 since last week. Okinawa is home to more than half of the approximately 50,000 American troops based in Japan.

The British government decided Monday to require people to wear face coverings in shops, joining a long list of countries that have made masks mandatory under some circumstances. After days of confused messaging, Prime Minister Boris Johnson's government said that masks will be required in stores starting July 24.

In other parts of the world, the number of infections has been rising dramatically, most notably in India, South Africa and Brazil.

India, which has the most confirmed virus cases after the United States and Brazil, on Monday reported a record daily surge of 28,701 new cases over the previous 24 hours. Authorities in several cities are reinstating strict lockdowns after attempting to loosen things up to revive an ailing economy.

Information for this article was contributed by Adriana Gomez Licon, Adam Geller, Jamey Keaten, Maria Cheng, Lisa Mascaro, Jonathan Lemire and staff members of The Associated Press; by Sheryl Gay Stolberg of The New York Times; by Josh Wingrove of Bloomberg News; and by David Fleshler of the Sun Sentinel. 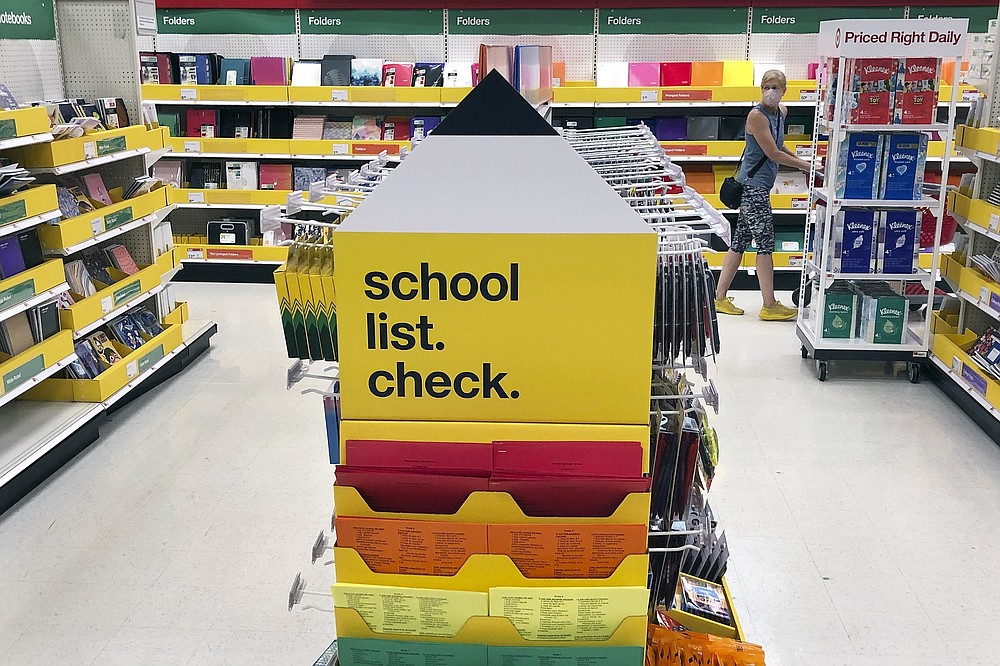 Back-to-school supplies await shoppers at a store on Saturday, July 11, 2020, in Marlborough, Mass. School districts across America are trying to decide how to resume classes in the fall amid the ongoing coronavirus pandemic. (AP Photo/Bill Sikes) 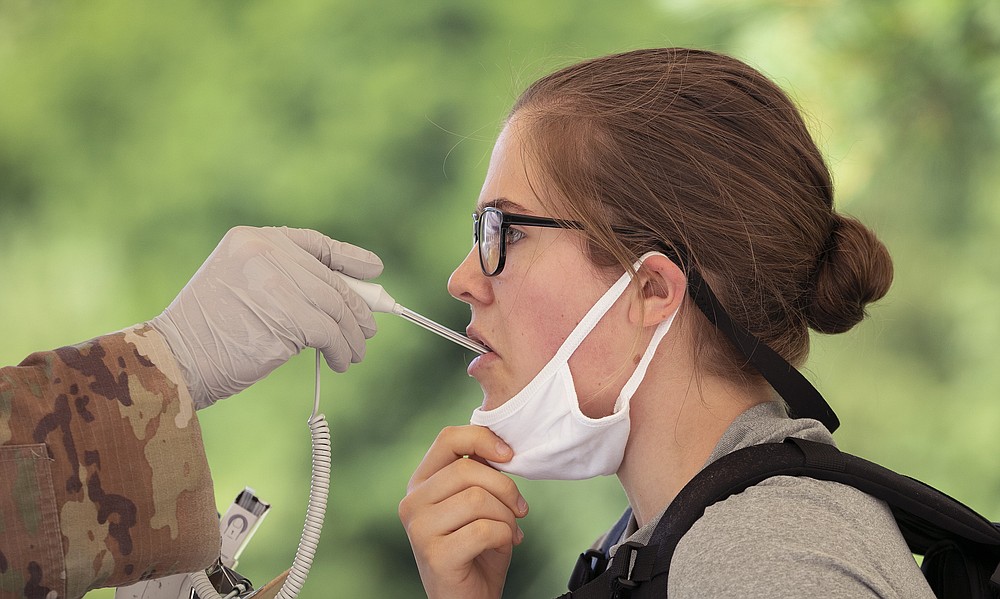 Cadet candidate Daphne Karahalios, of Chicago, has her temperature taken as she arrives at the U.S. Military Academy, Monday, July 13, 2020, in West Point, N.Y. The Army is welcoming more than 1,200 candidates from every state. Candidates will be COVID-19 tested immediately upon arrival, wear masks, and practice social distancing. (AP Photo/Mark Lennihan) 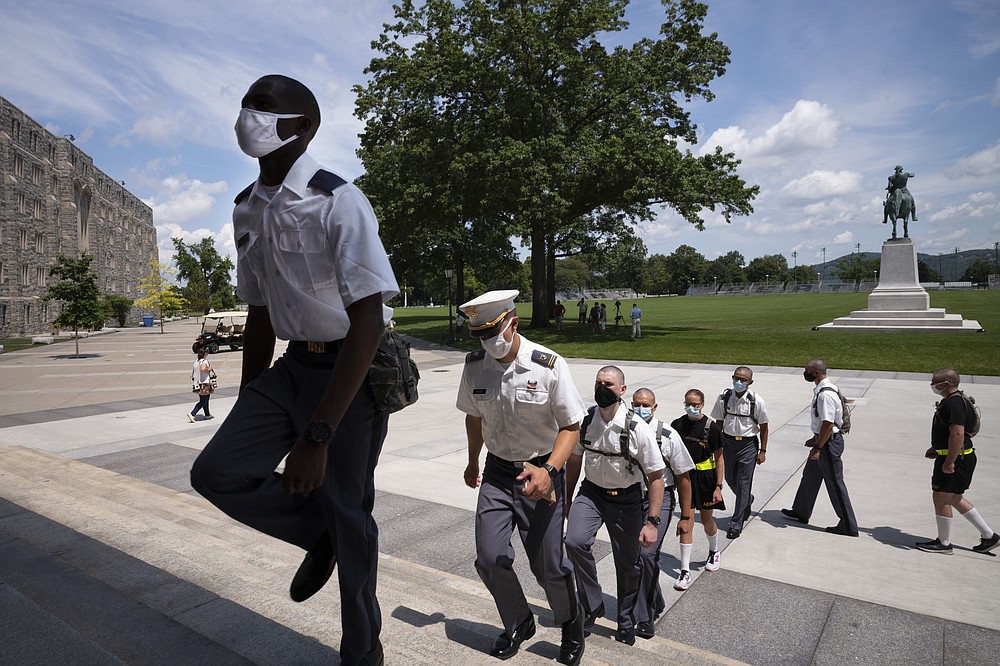 A formation of new cadets marches in formation, Monday, July 13, 2020, at the U.S. Military Academy in West Point, N.Y. The Army is welcoming more than 1,200 candidates from every state. Candidates will be COVID-19 tested immediately upon arrival, wear masks, and practice social distancing. (AP Photo/Mark Lennihan) 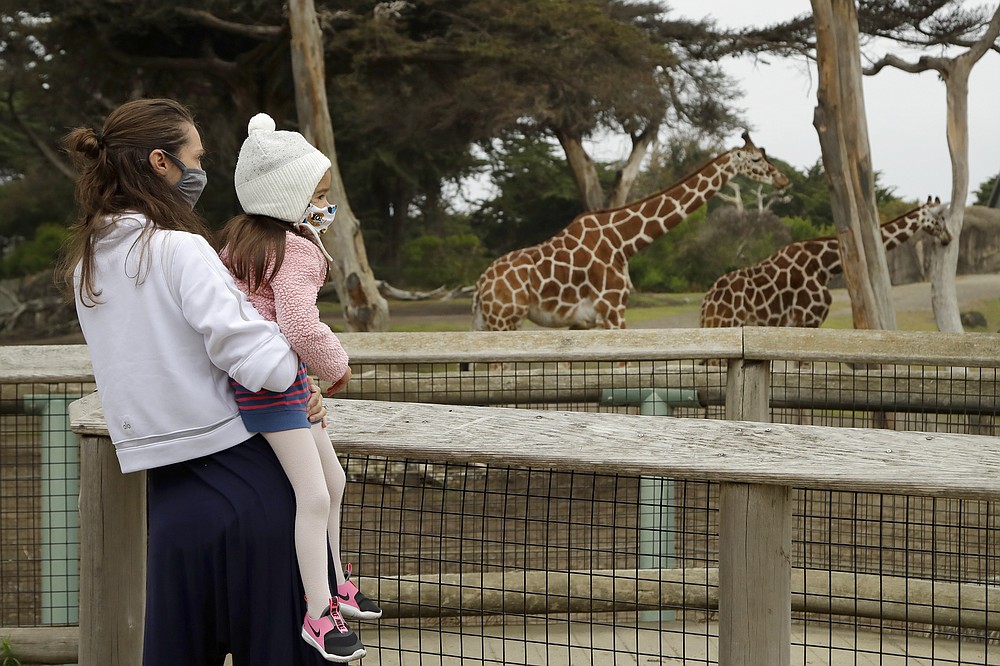 A woman holds a child while viewing giraffes at the San Francisco Zoo on Monday, July 13, 2020, in San Francisco. (AP Photo/Ben Margot) 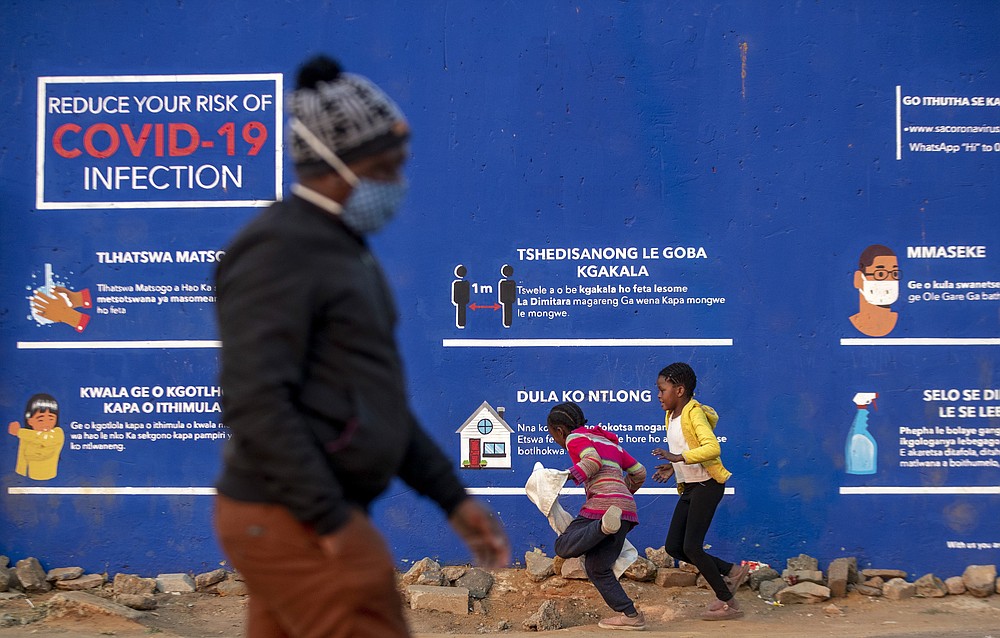 People walk past a COVID-19 advert promoting the use of face mask, washing of hands, use of sanitiser and social distance in the township of Soweto outside of Johannesburg, South Africa, Monday, July 13, 2020. South African President Cyril Ramaphosa said that top health officials warn of impending shortages of hospital beds and medical oxygen as South Africa reaches a peak of COVID-19 cases, expected between the end of July and September. South Africa's rapid increase in reported cases has made it one of the world's centers for COVID-19. (AP Photo/Themba Hadebe) 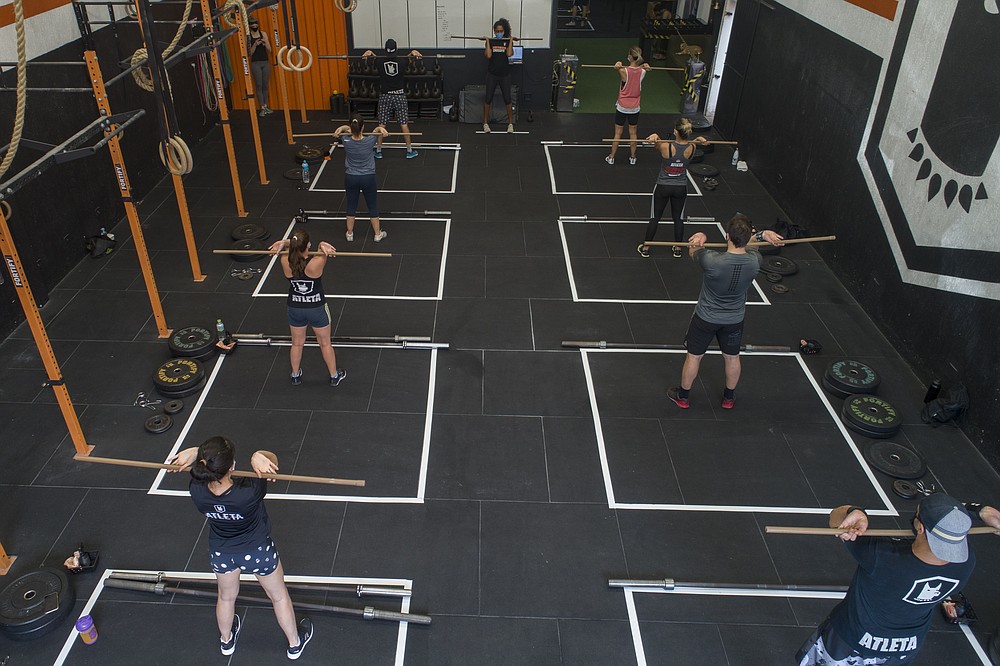 People exercise inside a gym with its floor marked for social distancing amid the COVID-19 pandemic in Sao Paulo, Brazil, Monday, July 13, 2020. Gyms are allowed to re-open Monday after over three months of lockdown but are required to enforce social distancing measures and reduce operating hours. (AP Photo/Andre Penner) 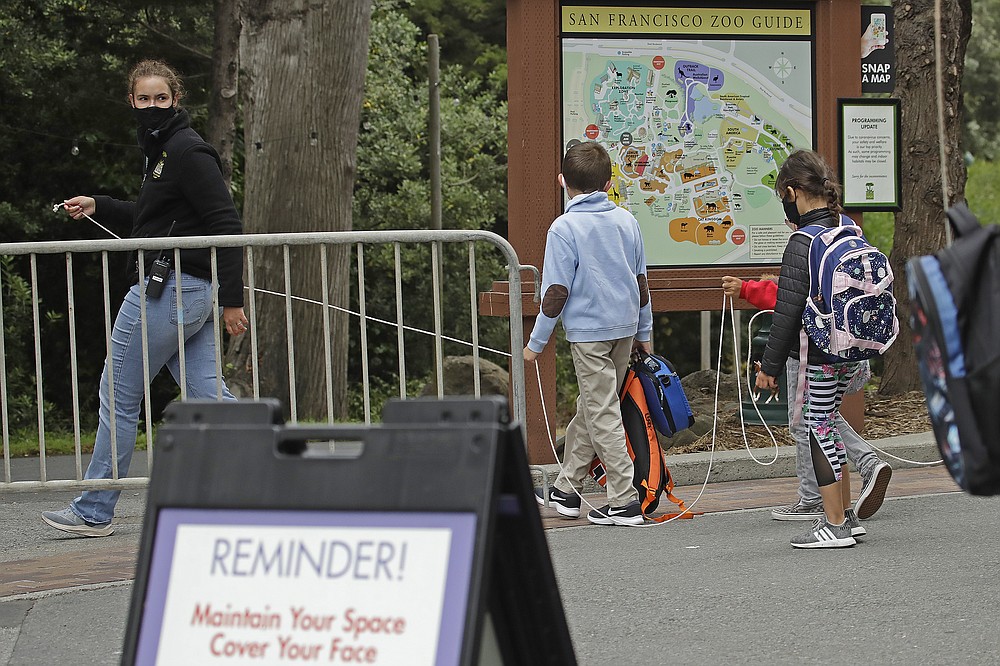 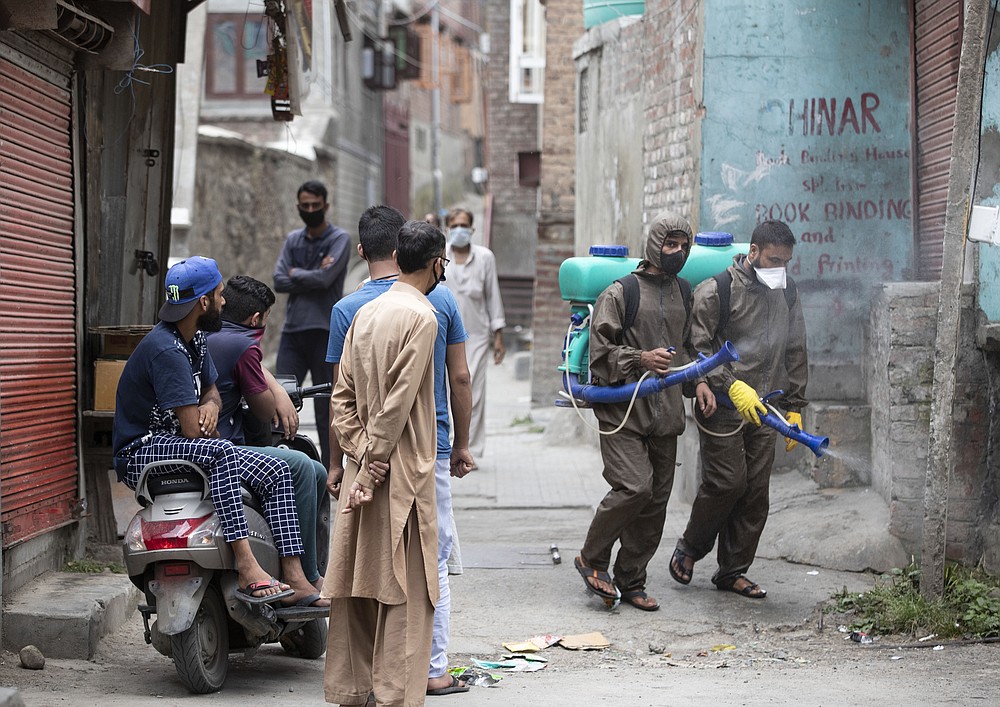 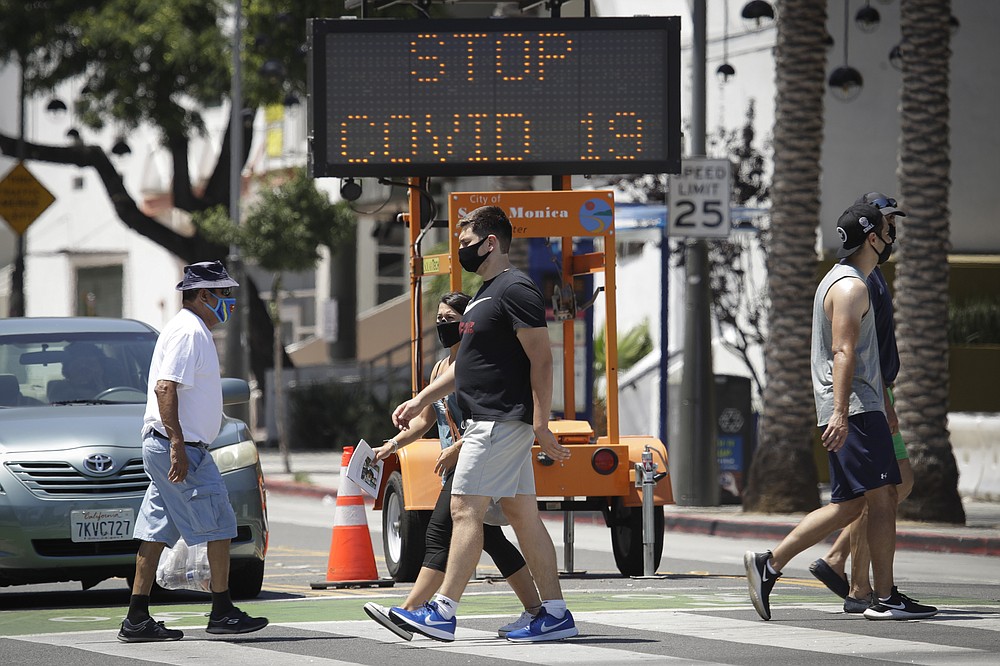 Pedestrians wear masks as they cross a street amid the coronavirus pandemic Sunday, July 12, 2020, in Santa Monica, Calif. A heat wave has brought crowds to California's beaches as the state grappled with a spike in coronavirus infections and hospitalizations. (AP Photo/Marcio Jose Sanchez) 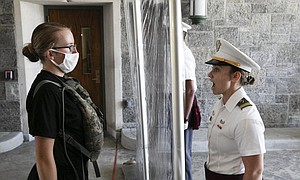 Photo by AP
A new cadet (left) listens as First Class Cadet Madison Teague yells commands from the other side of a plastic screen Monday at the U.S. Military Academy in West Point, N.Y. (AP/Mark Lennihan)