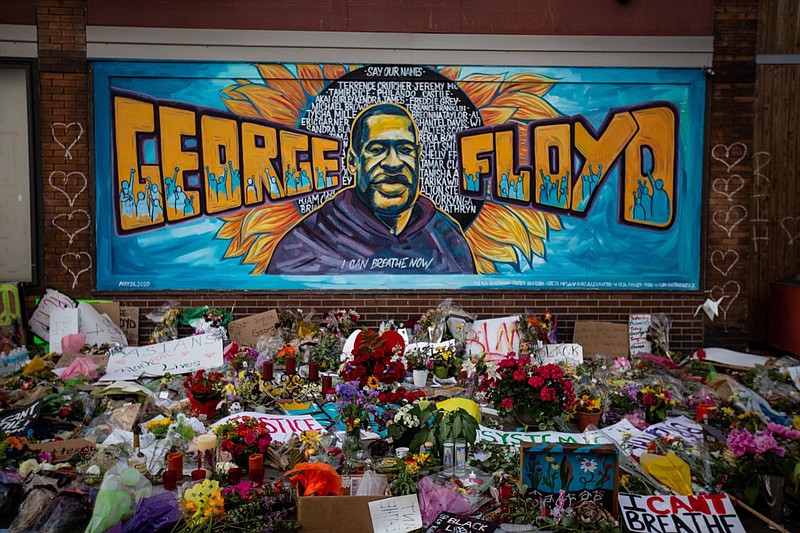 This is a makeshift memorial and mural outside Cup Foods where George Floyd was killed by a Minneapolis police officer on May 25. (Jason Armond/Los Angeles Times/TNS)

BALTIMORE — When Howard County, Md., fifth-grader Josiah Wheeler was doing a class project on the late U.S. Rep. Elijah Cummings earlier this year, one story stuck with him.

When Cummings was 11 years old, he received a scar that left a mark both on his head and on his psyche.

The future congressman was protesting the segregation of a pool in Baltimore. Cummings and his friends attended the pool, which was open to the public but didn't welcome Black people, and a group of community members threw rocks at Cummings — one of which hit him in the face and left a scar.

Much has changed since Cummings helped to integrate the Riverside Park Pool in South Baltimore in 1962.

For the last six weeks, protests over systemic racism and police killings have swept across the country — including multiple demonstrations in Howard County.

When Josiah saw the video of the death of George Floyd, a Black man, at the hands of a white Minneapolis police officer in May, he felt sad and frustrated. He didn't know where to put his emotions, so he decided to write — one of his favorite hobbies.

He penned a poem a few days later about the protests, police violence and what it's like to be an 11-year-old Black boy in America today and sent it to his Gifted and Talented teacher at Swansfield Elementary School in Columbia, Md.

"When I read it, I cried," said Laine Malcotti, the teacher. "His heart was so open in the poem."

The 22-line poem was then shared on Swansfield's Twitter page, where hundreds of people liked, retweeted or commented. Malcotti also sent it to a friend who works with the Bill Gates Foundation in Seattle, where it was read during a meeting.

I know, struggling with the racist,

Protest it's gonna get violent.

I know we're all struggling.

Look to me color's all you see,

George Floyd his neck under your knee,

By the cops we all loved.

Protest our rights are what we need.

Tear gas in my eye help me please.

How'd this all lead in history?

My skin's not a weapon.

Having to tell your child,

The person you want to have everything,

That because of their skin tone

Or get special opportunities.

Or to have to teach them to not let police think you're a threat.

Because God forbid that.

Some of us live that."

"I was shocked when I first read it," said his mother, Tameka Lloyd. "I started to tear up. As a 38-year old, I know how these events have affected me emotionally. But I didn't realize my 11-year old was so attuned of everything that's going on. I was proud that my son was able to articulate himself in the poem, but it was saddening at the same time that we're still fighting the same fight."

Josiah said he has been interested in poetry since he was in second grade. Most of his poems have been for class, but after he saw the video of Floyd's death, he wanted to write out his emotions.

"When I watched the video, it made me really angry and sad and scared," Josiah said. "It's crazy. This keeps happening again and again. It scares me that this could happen to any of my family or me, so I thought writing a poem would be relieving."

Malcotti said she was humbled that Josiah would send the poem to her. Josiah started at Swansfield in fourth grade, which is when he and Malcotti met. Josiah has also been a part of Unheard Perspectives, a Howard County Public School System program for elementary students to learn more about Black innovators.

"The line, 'My skin's not a weapon,' brought up a lot of emotion in me," Malcotti said. "That poem and knowing Josiah, who is a great kid, brought it all home for me. It brought home how emotional it is, how raw he is, how much I need to learn."

The second part of Josiah's poem is about "the talk" that many Black parents have with their kids about racism. He remembers a year or two ago, his mom talked to him about how he may not be treated the same as his white friends. Lloyd said she told him about the racial profiling she has endured and about her grandfather, who her family believes was unjustly killed by police in 1981.

"It's just a part of our life," said Lloyd, who also has a 17-year-old daughter and a 16-year-old son. "These are conversations we have to have. It's not a one-time conversation and then it ends. It's ongoing."

Josiah said he has also been encouraged by the protests over the deaths of Floyd, Ahmaud Arbery in Georgia and Breonna Taylor in Kentucky. In Howard County, several demonstrations have taken place, including a Chalk for Justice event that Josiah and his mother attended in June.

"I think protests are a really good way to show the passion or sadness or rage and to show that this world needs to change," he said.

It's been more than a month since Josiah wrote the poem, and he's now less than two months away from starting middle school. With his talent and passion for writing, Malcotti hopes Josiah continues to write poetry. She believes Josiah's poem and the protests across the country have taught him that he has a voice.

"The event in Cummings' life when he integrated the swimming pool was when (Josiah) was 11, too," Malcotti said. "I think that really stuck with Josiah after the presentation. And now he's starting to see his voice can matter."