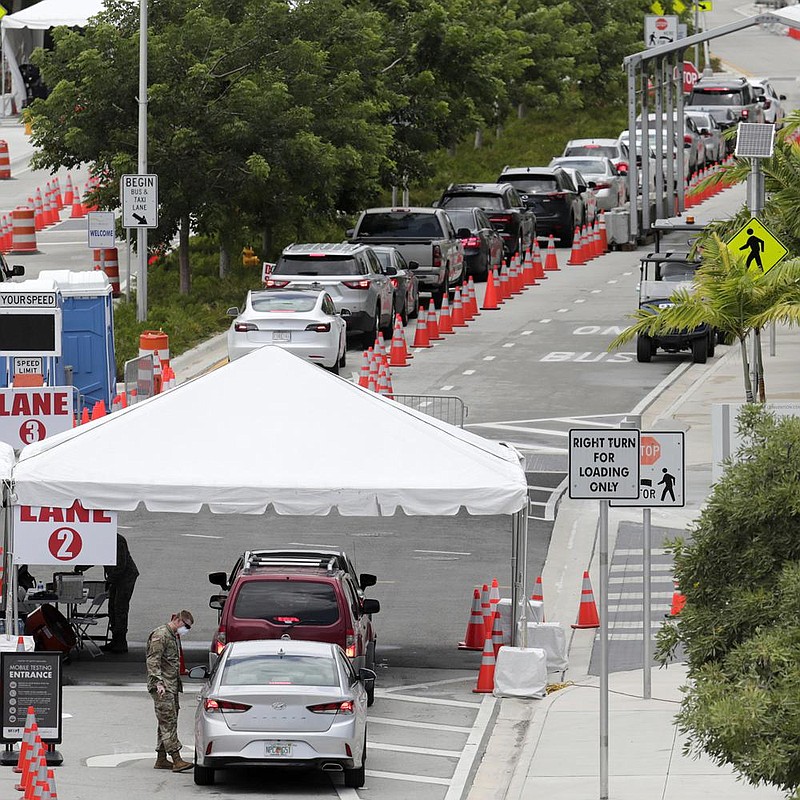 Vehicles line up Sunday at a covid-19 testing site outside the convention center in Miami Beach, Fla. More photos at arkansasonline.com/713covid/. (AP/Lynne Sladky)

ST. PETERSBURG, Fla. -- As the United States grapples with the worst coronavirus outbreak in the world, Florida hit a grim milestone Sunday, setting the national record for a state's largest single-day increase in positive cases.

In Florida, where parts of Walt Disney World reopened over the weekend, 15,299 people tested positive Sunday, and 45 deaths were recorded, according to state Department of Health statistics. The state's total number of cases rose to 269,811.

The reopening of Disney's Magic Kingdom and Animal Kingdom in Orlando has worried health experts who urge people not to gather in groups. But guests at the park said people were wearing masks and socially distancing, and videos showed near-empty parks.

Florida's milestone came after a week in which the state reported 514 fatalities -- an average of 73 per day. Three weeks ago, it was averaging 30 deaths per day.

[Video not showing up above? Click here to watch » https://www.youtube.com/watch?v=3SxOw_3gAeQ]

Deaths from the virus have been rising in the U.S., especially in the South and West, though they're still well below the heights hit in April, according to an Associated Press analysis of data from Johns Hopkins University.

"I really do think we could control this, and it's the human element that is so critical," said University of Florida epidemiologist Dr. Cindy Prins. "It should be an effort of our country. We should be pulling together when we're in a crisis, and we're definitely not doing it."

[Video not showing up above? Click here to watch » https://www.youtube.com/watch?v=f4W6OJxDe4Q]

"I know people want to live their lives," Prins added. "There have been a lot of other times, people have made those sacrifices in order to benefit our society. It's almost like a war effort. That's what we need right now."

Adm. Brett Giroir, a member of the White House Coronavirus Task Force, called mask-wearing in public, which has been met with resistance in some states, "absolutely essential."

Giroir, assistant secretary at the Health and Human Services Department, said Sunday on ABC's "This Week" that "if we don't have that, we will not get control of the virus."

Pelosi said on CNN's "State of the Union" that she hopes it means the president "will change his attitude, which will be helpful in stopping the spread of the coronavirus."

Researchers expect U.S. deaths to rise for at least some weeks, but some think the count probably will not go up as dramatically as it did in the spring because of several factors, including increased testing.

As of Sunday, the U.S. had 3.3 million confirmed cases, according to John Hopkins University's count. The country has recorded more than 135,000 deaths.

The World Health Organization, meanwhile, reported another record increase in the number of confirmed coronavirus cases over a 24-hour period, at more than 230,000. The U.N. health agency said the U.S. again topped the list, with more than 66,000 new cases.

Speaking Sunday on CBS' "Face the Nation," the president and CEO of AdventHealth said the peak of hospitalizations in Florida will be "sometime in front of us in July."

Terry Shaw said his projection is assuming that people practice social distancing and wear masks to slow the spread of the virus.

He said Advent, which has hospitals in nine states, including 30 in Florida, has adequate personal protective equipment, a stockpile of ventilators and a clinical team that's learned how to better treat the virus.

"I give you an example. Our length of stay in our ICU for covid patients has dropped in half. The number of people coming into our hospital with covid that need a ventilator, we've also been able to cut that in half. And because of those things, our death rate has also been cut in half" since the beginning of the pandemic, he said.

The health system's intensive-care capacities in Florida are running at about 85% to 90%, "but we have the ability to turn some of our progressive-care units into ICU units if we need to do so," Shaw said.

Florida Gov. Ron DeSantis said that even with the rising infection rates, he still wants the state's schools to reopen as scheduled next month, saying children have not proved to be vectors for the disease in states and countries where campuses are open. He said each county will have to come up with procedures, depending on their local infection rate.

DeSantis said that not opening the schools would exacerbate the achievement gap between high- and low-performing students.

"We know there are huge, huge costs for not providing the availability of in-person schooling," he said. "The risk of corona, fortunately, for students is incredibly low."

Meanwhile, a commissioner for a county near Jacksonville is seriously ill with the virus, according to a post by his daughter on Facebook.

St. Johns County Commissioner Paul Waldron had recently voted against an ordinance requiring masks, but not because he opposed them. He said he wanted more answers from county administrators about which masks are most effective and whether the county had enough for employees and visitors at government buildings.

Elsewhere in the world, Eastern European countries were among those facing rising waves of infections, leading to riots in Serbia, mask mandates in Croatia and travel bans or quarantines in Hungary.

"We see worrisome signs about an increase in the number of cases in the neighboring countries, Europe and the whole world," said Gergely Gulyas, Hungarian Prime Minister Viktor Orban's chief of staff. "Now we have to protect our own security and prevent the virus from being brought in from abroad."

Hungarian authorities said Sunday that they have sorted countries into three categories -- red, yellow and green -- based on their infection rates, and will impose restrictions, including entry bans and mandatory quarantines, depending on where people are arriving from.

Serbia, where health authorities are warning that hospitals are almost full due to the latest surge, police clashed with anti-government protesters for four nights last week, demonstrations that forced the president to withdraw plans to reintroduce a lockdown. Many of the new infections have been blamed on soccer matches, tennis events and nightclubs.

In Bulgaria, a surge in cases led authorities to reintroduce restrictions lifted a few weeks ago.

Albania also has seen a significant increase in infections since mid-May, when it eased lockdown measures. The Balkan nation's Health Ministry called the situation at the main infectious disease hospital "grave."

Yet the numbers of infections in Eastern Europe pale in comparison to daily coronavirus reports from India, South Africa and Brazil, whose virus-downplaying president has tested positive.

India, which has the most cases after the United States and Brazil, saw a record surge of 28,637 cases reported in 24 hours. Authorities announced a weeklong lockdown beginning Tuesday in the key southern technology hub of Bangalore, where the offices of top tech companies such as Microsoft, Apple and Amazon are located.

In South Africa, President Cyril Ramaphosa said the country will immediately return to a ban on the sale of alcohol to reduce the number of trauma patients so hospitals have more beds open to treat covid-19 patients. He said that since alcohol sales were reintroduced in June, hospitals have experienced a spike in admissions in their trauma and emergency wards.

The country is also reinstating a curfew to reduce traffic accidents, and it mandated that all residents wear masks in public.

In a nationally televised address Sunday night, Ramaphosa said top health officials warn of impending shortages of hospital beds and medical oxygen as South Africa expects a peak of cases between the end of this month and September. He said some hospitals have had to turn away patients because their beds are full.

South Africa's rapid increase in reported cases has made it one of the world's hot spots, ranking it the ninth-most-affected country, according to Johns Hopkins. It has reported increases of more than 10,000 confirmed cases for several days, and the latest daily increase was nearly 13,500.

South Africa accounts for 40% of all confirmed cases on the continent.

"While the surge of infections has been expected, the force and the speed with which it has progressed has, quite understandably, caused great concern," said Ramaphosa. "Many of us are fearful of the danger this presents for ourselves and for our families."

​​​​​Information for this article was contributed by Tamara Lush, Pablo Gorondi, Mogomotsi Magome, Andrew Meldrum, Tamara Lush, Terry Spencer and staff members of The Associated Press; and by Naseem S. Miller of the Orlando (Florida) Sentinel. 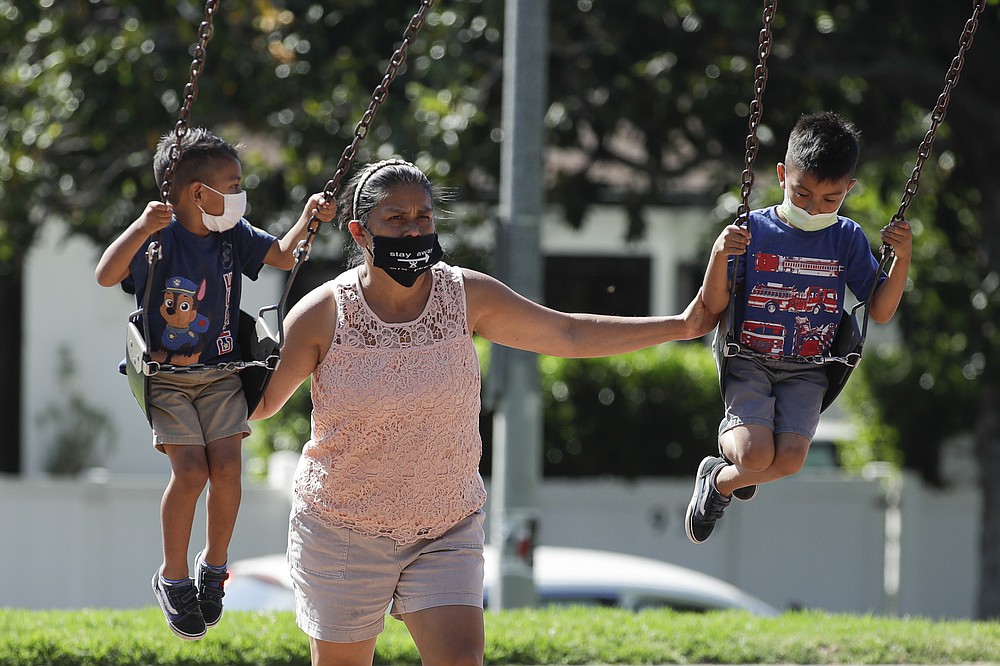 A woman and two children wear masks at a playground, Saturday, July 11, 2020, in Los Angeles. The number of deaths per day from the coronavirus in the U.S. had been falling for months, and even remained down as some states saw explosions in cases. But now a long-expected upturn has begun, driven by fatalities in states in the South and West. (AP Photo/Marcio Jose Sanchez) 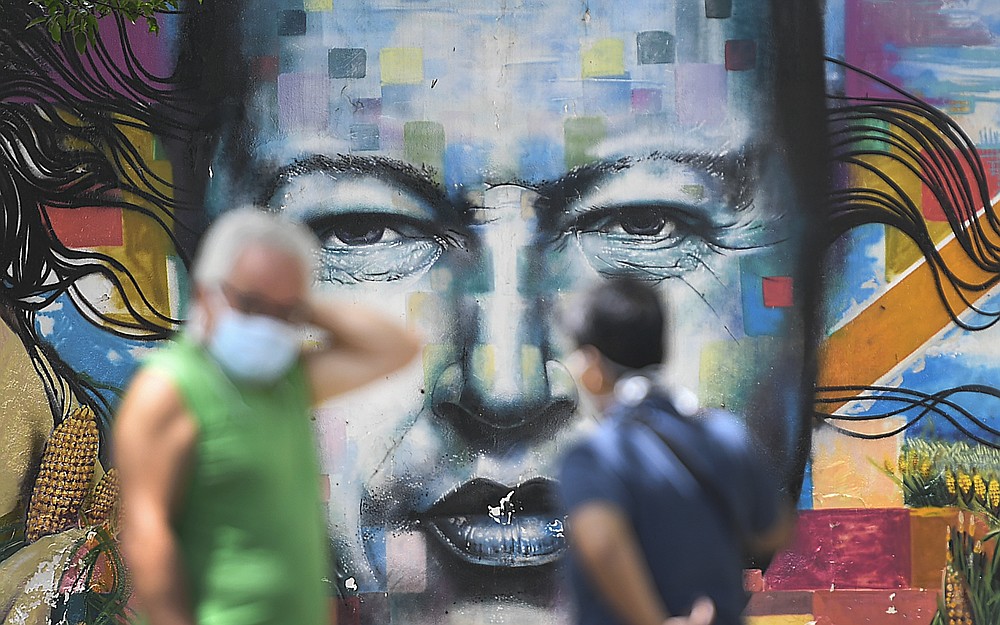 Pedestrians wearing masks to curb the spread of the new coronavirus chat in front of a mural of late President Hugo Chavez, in Caracas, Venezuela, Sunday, July 12, 2020. (AP Photo/Matias Delacroix) 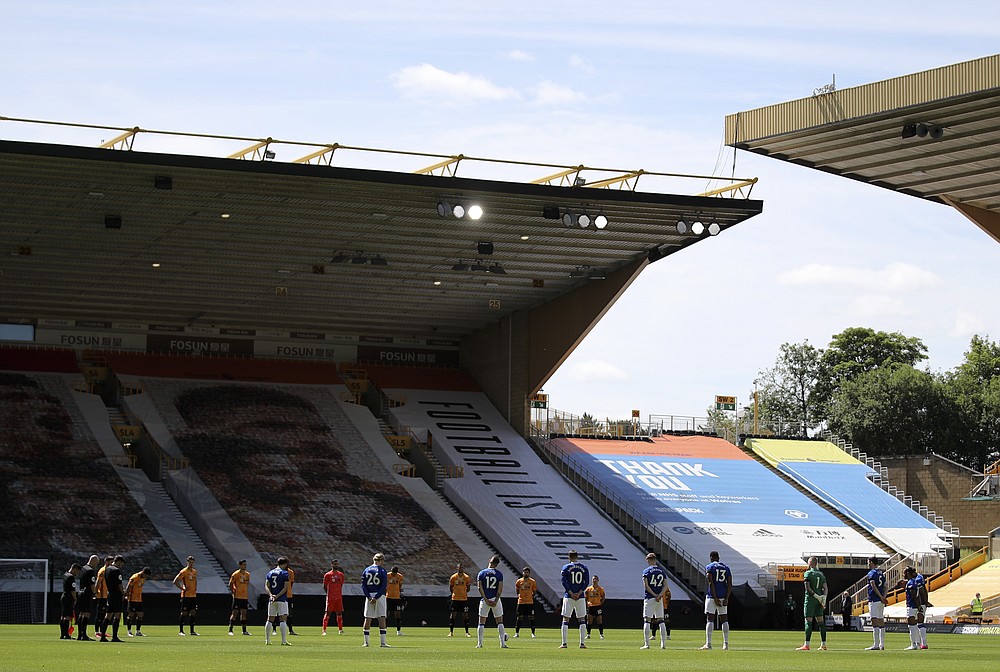 Players observe a minute of silence in memory of Jack Charlton prior to the start of the English Premier League soccer match between Watford and Everton at the Molineux Stadium in Wolverhampton, England, Sunday, July 12, 2020. (Molly Darlington/Pool via AP) 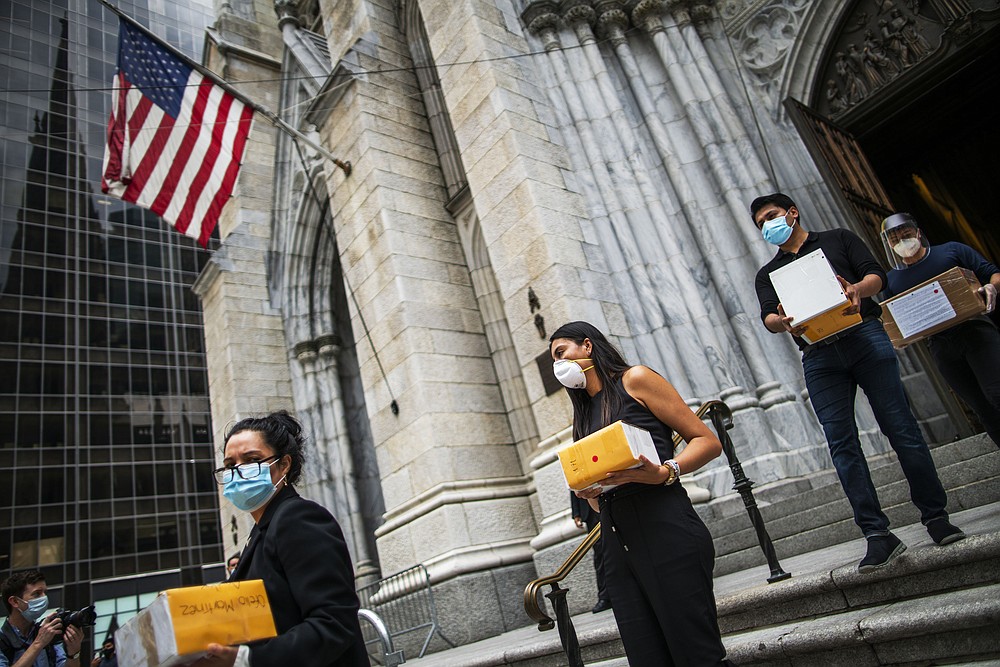 Mourners carry out the remains of loved ones following the blessing of the ashes of Mexicans who died from COVID-19 at St. Patrick's Cathedral, Saturday, July 11, 2020, in New York. The ashes were blessed before they were repatriated to Mexico. (AP Photo/Eduardo Munoz Alvarez) 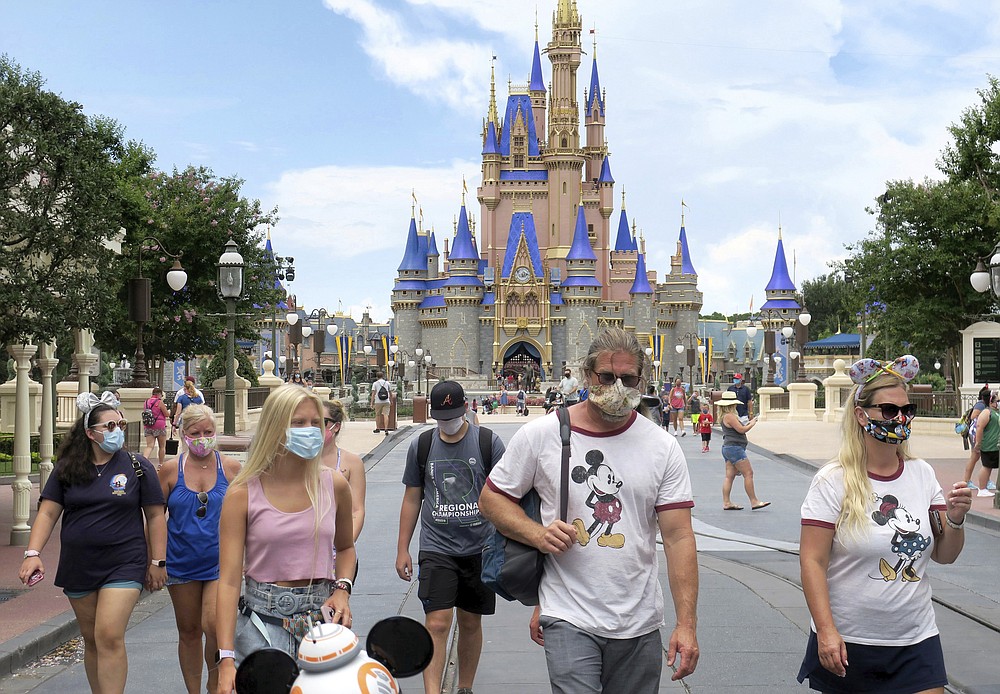 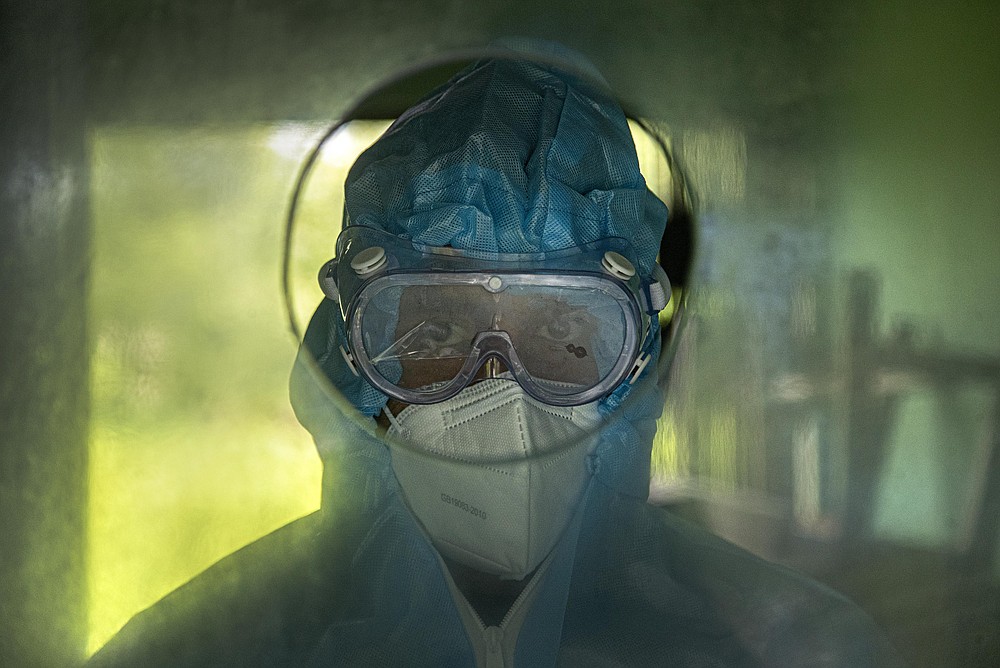 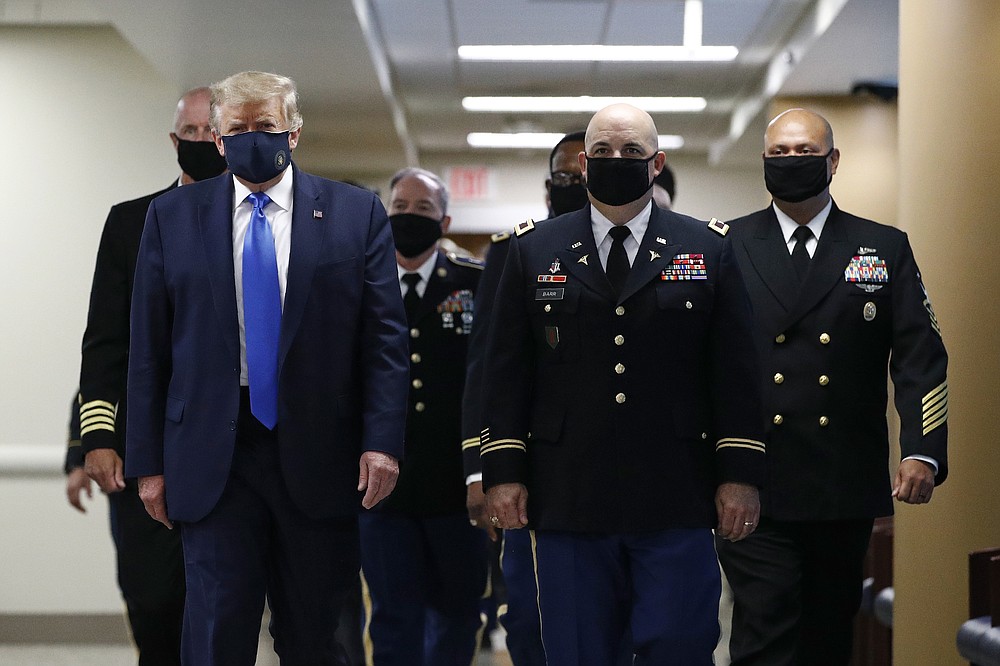 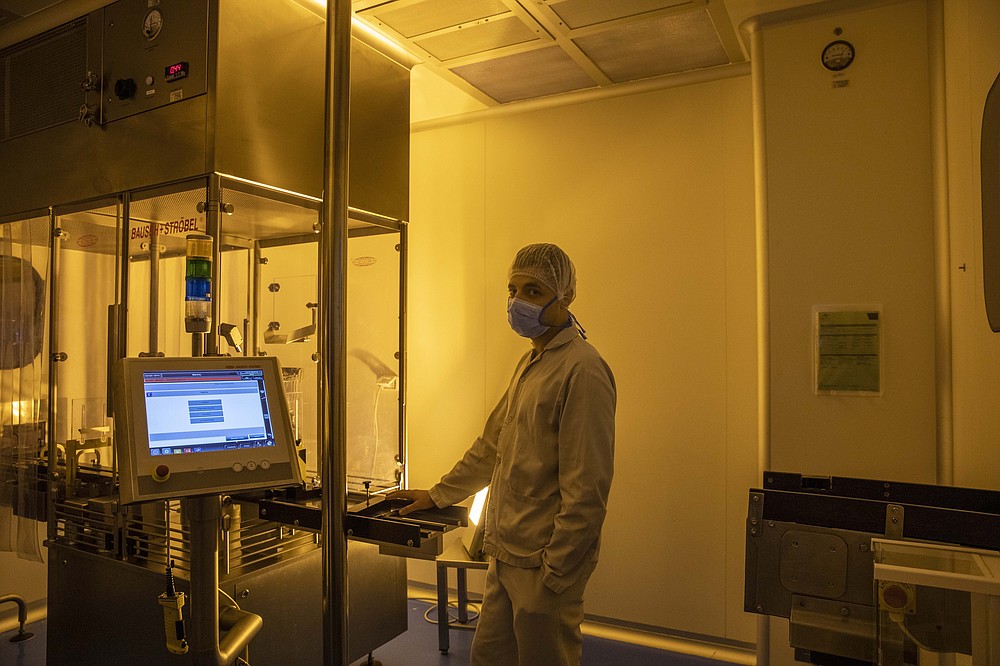 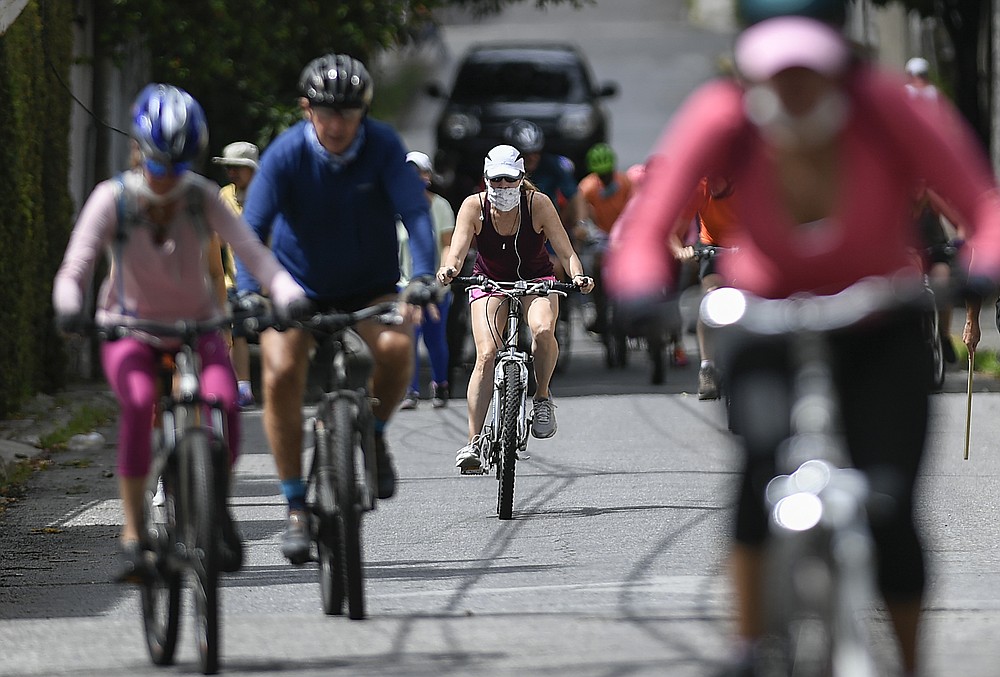 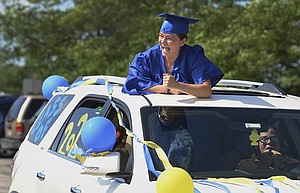 Photo by Daily Herald
Katlynn Breneisen, a senior at Warren High School in Gurnee, Ill., celebrates Sunday during a parade through the parking lot at the school’s graduation ceremonies. Such parades have been seen at many schools as graduates mark the occasion while practicing social distancing. (AP/Daily Herald/Jeff Knox)