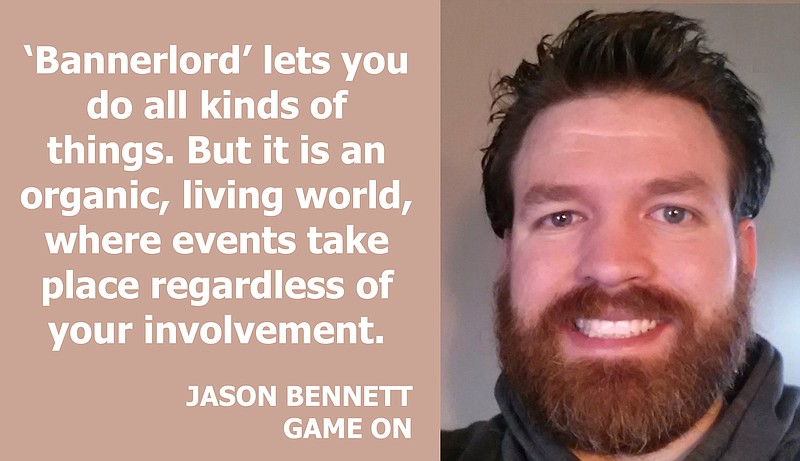 In "Mount and Blade II: Bannerlord," the world is what you make of it. Set on the fictional continent of Calradia, in a setting similar to the chaotic Migration Period after the fall of the Roman Empire, "Bannerlord" is an action and strategy role-playing game, and there's really no other franchise like it on the market.

The premise is fairly direct. Your character starts off with very little — an old nag to ride, a few denars of spending money in your pocket and a weapon. Your parents have been slain and your younger siblings taken prisoner. To rescue them, you'll need money and men, and so off you go.

And then just like that, you can do almost anything you like in the sandbox world of Calradia.

There's no set path to follow, and any goals you set are your own. Would you like to be the richest trader in the world? Sure, you can do that. Would you like to lead a crack band of mercenary troops, selling your blade to a noble as they try to conquer the world? Go for it. Want to rise up in the ranks of nobility, marry a king's daughter and then attempt to unify the continent under a single flag? Also an option.

Whether you choose to be loyal or be a betrayer, to save villages of smallfolk or burn them down, "Bannerlord" lets your own conscience be your guide.

The game starts with character creation — and it's full of extremely important choices. You'll choose the basic blueprint for your character — his or her starting statistics and skills, putting points into options such as weapon skills or being charismatic. Lookswise, characters are extremely customizable as well, and the game can be experienced as a man or a woman.

At game start, you're alone, and a rather unimportant person, not even famous enough to be hired as a mercenary.

You'll travel on an overland map to the nearest village, and for a few denars, you'll add a few villagers with pitchforks to your ranks, repeating the process until a score of men follow you.

As I said, it's kind of up to you what you do, but the thing to remember, the thing that really makes this game interesting, is that it's an organic, living world, where events take place regardless of your involvement. Merchants will travel around as they buy and sell. Kingdoms will declare war and make peace. Years can go by, and characters will age. You can even die of old age.

The world responds to the events that happen in it. If a land is at war, it will lack for recruitable soldiers, and armies will buy up all the food, raising prices. Armies will often pillage small villages for extra resources, burning them down in the process, which can lead to an economic downturn across a whole region.

It should be noted that despite this sequel being first announced in 2012, "Bannerlord," which was released in March, is still in early access. It is not yet a "completed" game.

However, this game is also a labor of love, made by a fairly small studio in Turkey. Since March, there have been about 80 patches to update and modify the game, with the developer very responsive to feedback from players.

As your character experiences the world, he or she will gain levels in skills through use. Buying and selling will raise the trade skill; shooting enemies with a bow will raise the archery skill; leadership is raised by commanding armies, and so on. With each level increase, players will gain a skill point, which increases how fast a skill is learned.

When combat occurs, players switch from a bird's-eye map view to a third- or first-person view. Combat is pretty gritty, and there's a steep learning curve as you learn to block, parry and dodge enemy blows.

It's even possible to get married in "Bannerlord," as long as you've entered the ranks of nobility and achieved enough success (and can pay the dowry). Your wife (or husband) is a powerful ally who can help in combat or in managing a city.

And with marriage comes pregnancy, and then kids, who grow rather quickly into adults.

If you've managed to have a child and that child reaches adulthood, if your character dies, you can continue to play as your offspring.

"Bannerlord" also has a multiplayer mode, where teams of hundreds of players can face off against one another and try to storm castles.

And there's even a co-op campaign option said to be in development.

One can't talk about "Bannerlord" without also talking about its extensive modding community. "Bannerlord" is a franchise that fully embraces players taking this game and altering it however they want. Some changes will hardly be noticeable, such as slight changes to equipment wielded by troops, or making children grow to adulthood faster. Others radically alter the game, such as changing the setting to that of Middle Earth in The Lord of the Rings trilogy and adding elves, dwarves and orcs to the game.

If you're a fan of the medieval sandbox genre, this is a must-have.

TaleWorlds Studio provided a review copy of this game.