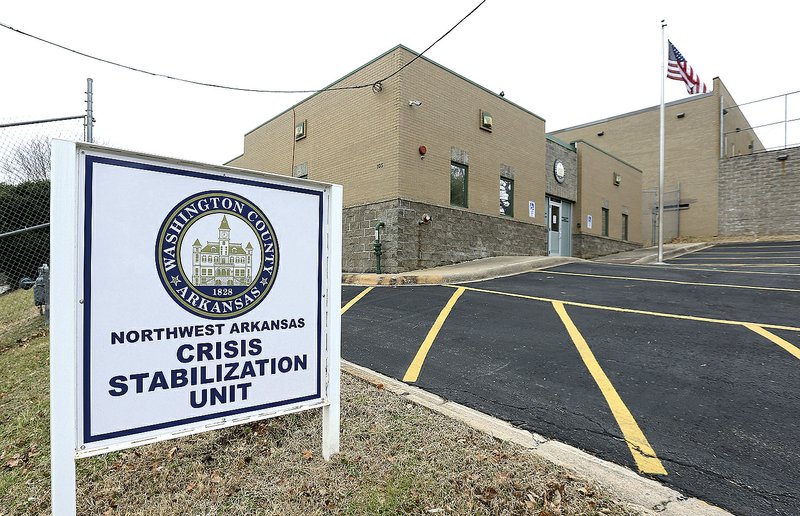 "We're going to be reaching out to Boone County and Newton County about including them in the service area," Washington County Judge Joseph Wood said recently. "Boone County already has officers trained in the crisis intervention techniques. It doesn't make sense for them to continue to use their jails as catchment areas when we have this service available."

Kathryn Griffin, justice reinvestment coordinator with Gov. Asa Hutchinson's office, said expansion is possible for each of the four Crisis Stabilization Units in the state. There are 16-bed facilities in Fayetteville, Fort Smith, Little Rock and Jonesboro.

The state is paying for the program through June 2021, Griffin said, and will evaluate the results at that point.

"There are areas of need that are not being served," Griffin said. "We would like to see some cities like Pine Bluff and Conway utilize the Pulaski County unit but they haven't been willing to sign on yet. Hot Spring and Garland counties are signed up."

The Sebastian County unit is looking to add Johnson and Pope counties. Possible expansions for the Craighead County CSU are under consideration, she said.

Expanding the service areas will add challenges, Griffin said. Some counties in the service areas have been slow to use the programs, often citing the time needed to travel to and from the centers and the diversion of manpower from other law enforcement duties.

"Craighead County is almost two hours away from Lee County, for example," Griffin said. "We are working with law enforcement, with medical providers, community health providers and others to work out these transportation problems for all of the CSUs."

"In our first year I think we did come across some barriers, but nothing we didn't expect," McAllister said. "With any new program there is going to be a learning curve."

The unit admitted 365 people during the first year.

McAllister said the unit's staff and law enforcement agencies have worked out ways to communicate more efficiently, with many possible referrals handled over the phone instead of requiring every person be brought to the center. Everyone undertands better what the center offers, she said.

"They have really bought into our processes," McAllister said of the law enforcement agencies in the four counties -- Benton, Washington, Carroll and Madison -- that are now part of the service area. "And we're always open to feedback on how can we make our process better. As long as the CSU is open I think we will continue improving our relationship with law enforcement."

Fayetteville Police Chief Mike Reynolds said 110 of his 131 officers have received some Crisis Intervention Team training. Reynolds said the first year of operations has convinced him the unit is valuable.

"I think it's an awesome resource, not only for us in law enforcement but for our community," Reynolds said. "It gives us a resource, a place we can take folks who are battling mental health issues and who might not otherwise be able to get the help they need."

Reynolds said he had some initial misgivings about having the center in Fayetteville. He was concerned his officers might be called to the center frequently to deal with "combative" individuals. He said he thought people brought from other areas and discharged here might linger and cause problems.

"That hasn't happened," he said.

Rogers Chief Hayes Minor said he has about 30 CIT-trained officers out of 113 in his department. He said Rogers has used the CSU as much as possible. In the first quarter of 2020, Minor said, Rogers officers responded to 143 crisis intervention calls. Of those, six were resolved with individuals being taken voluntarily to the CSU. Another 50 were taken to local emergency rooms and five ended with involuntary commitment orders, he said. The remainder were resolved in other ways.

"Every opportunity our officers have had, I think we've used it," Minor said.

Griffin said each of the four units began slowly and has shown growth in referrals and admissions. She said since the beginning of the covid-19 pandemic, all four have had fewer referrals and admissions in some months. Griffin said no cases of the covid-19 have been reported at any of the units. The Northwest Arkansas unit, for example, had 43 admissions in January and February. Admissions dropped to 39 in March, 38 in April and 33 in May.

The Sebastian County unit has had fewer admissions during the pandemic because it doesn't have individual rooms, Joey Potts, program director, said.

The unit had 71 admissions in March and that dropped to 56 in April and 53 in May. Potts said the unit has two pods with six beds each and two rooms with two beds each. The other three units all have individual rooms, she said.

"Because of social distancing I've had to limit our admissions," Potts said.

The unit was the first to open, in March 2018, and Potts said she has seen the growing pains the others are going through. The Pulaski County unit opened in August 2018, Northwest Arkansas in June 2019 and Craighead County in October 2019.

Potts said it takes time to develop good working relationships with the law enforcement agencies and for officers and unit staff members to get the units working smoothly.

"I was surprised at how long it took us to get other people on board," Potts said. "I tell the other CSUs to just hang in there. We've been open two years and I think we have an excellent relationship with our local law enforcement now. It took time for us to do that. We had to reach out and we had to ask them to think differently."