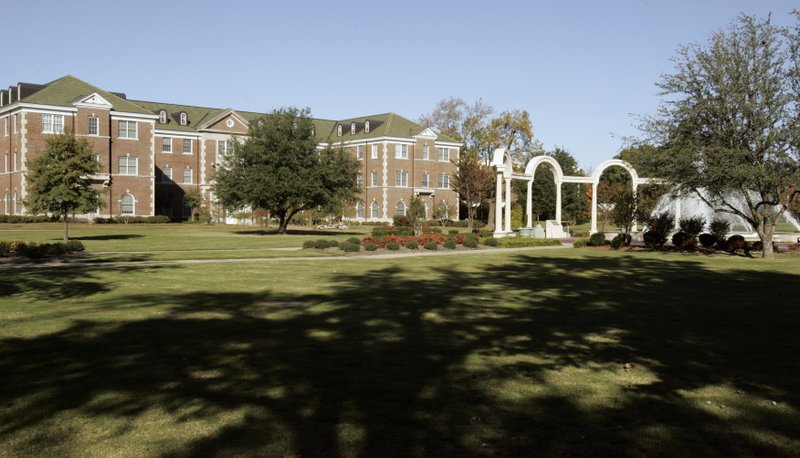 FILE - The campus of the University of Central Arkansas in Conway, Ark. is shown Monday, Oct. 27, 2008. (AP Photo/Danny Johnston)

As Arkansas colleges and universities prepare to open to students in a month, leaders are still devising plans for how to welcome thousands of people back on campus while also keeping them safe.

Colleges and universities across the nation are grappling with the same thing -- how to operate in traditionally close quarters during a pandemic. Some outside Arkansas have decided to operate only remotely.

Arkansas' institutions largely plan to hold on-campus instruction, but many have contingency plans in case they need to transition from in-person classes to online ones.

Some are fielding requests from employees asking for remote-only work to protect their health or that of their families.

Researchers and health experts recommend that colleges opt for smaller class sizes and reduce opportunities for social contact, such as at indoor events.

Some Arkansas colleges have plans for testing and contact tracing to detect and contain potential coronavirus cases on campus, and state health officials continue to come up with plans for the higher education institutions.

Colleges and universities face spending thousands or even millions of dollars on personal protective equipment to help keep campuses clean and disinfected.

Another issue on campuses is whether to require face coverings when people can't stay six feet apart.

Last month, University of Arkansas System trustees held off on making that a requirement after board chairman John Goodson raised concerns about whether athletes could practice sports under proposed language requiring masks. Trustees meet again this week.

But at the University of Central Arkansas, President Houston Davis has already decided. Students and employees must wear masks when they can't socially distance in common areas.

The university will have 50,000 face coverings to hand out during the academic year. Any student who refuses to wear one will be referred to the dean of students and educated on why wearing one is a good idea for his own health and that of people around him. If the refusal continues over several times, Davis said, the university will seek expulsion.

"Absolutely, we would handle it like any other" multiple offense student-conduct violation, he said.

"I don't think it's going to be a problem with our students," he said.

The Student Government Association is working on a campaign to encourage mask-wearing, Davis said, and students can avoid extra scrutiny during contact tracing if they can show they've been wearing face coverings all along.

Arkansas Tech University also plans to send people home who aren't wearing face coverings, including students, employees and visitors. In the past few months, the university has spent tens of thousands of dollars on masks, part of more than $300,000 spent on personal protective equipment this year.

While other schools say masks will be required, not all of them have detailed plans to enforce the requirement.

According to Arkansas Tech spokesman Sam Strasner, members of the team have been certified online through Johns Hopkins University.

UCA is developing a team with nearby Hendrix College and Central Baptist College. All three already work with Conway Regional Health System for health services.

Davis is awaiting plans from the state, but he started pursuing a local partnership back in May.

"We felt like, between our three colleges and Conway Regional Health System, let's begin working on a game plan for how we can make certain that we have a robust testing solution" and can handle anyone who is showing symptoms or connected to someone who is, he said.

The colleges will finalize and announce more details in coming days, Davis said.

The University of Arkansas-Pulaski Technical College also has a contact-tracing team. So far, it's two people, including Chancellor Margaret Ellibee.

The team will identify people who have been in contact with someone who has tested positive for the virus and will pass the information to the state Health Department for further investigation.

The college expects people to follow U.S. Centers for Disease Control and Prevention guidelines when they have symptoms and when they test positive, notifying the university and not returning to campus until they have been cleared by a physician.

If they are on campus when they experience symptoms, they'll be taken to their cars and have tests arranged for them, Ellibee said.

At UCA, Carmichael Hall will reserve its 120 rooms for people who need to quarantine, and 33 additional rooms in other campus houses will be available, as well.

Davis' backup plan before online-only is turning 50% to 60% of courses into online-only. That plan is still in play, he said.

The university has granted all 53 requests from employees to work remotely this fall, as of July 2, spokeswoman Amanda Hoelzeman said. Only 10 of those are faculty members, and the other 43 are staff members.

Other schools told the Arkansas Democrat-Gazette that they'd received requests but hadn't processed them yet.

As of July 8, Arkansas State University has 204 such requests, 17 of which it denied.

At the University of Arkansas, Fayetteville, 23 employees requested to work remotely. Only nine have been granted, and the others hadn't been processed as of July 2.