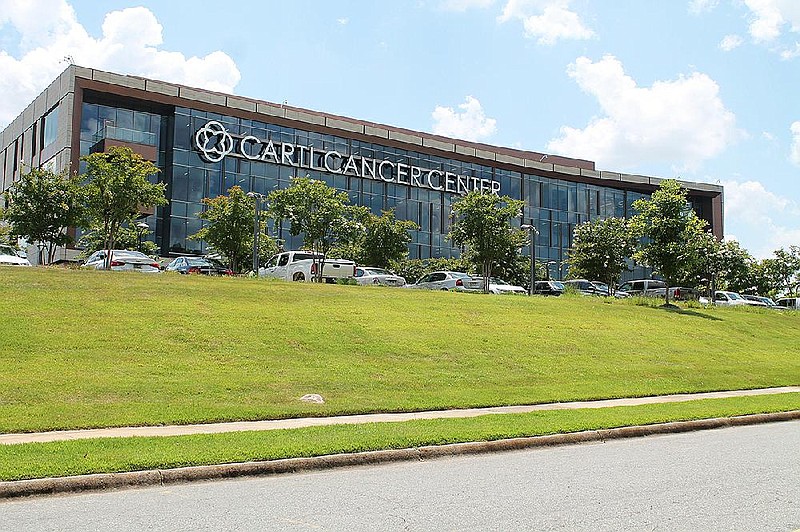 The CARTI Cancer Center in Little Rock is shown in this file photo. (Democrat-Gazette file photo)

The new center will include medical and radiation oncology, an infusion suite, imaging, mammography services and a lab.

Construction of the $18 million facility is set to begin in December and the project is anticipated to be completed by January 2022. The 25,000-30,000-square-foot center will be near Interstate 530 on 7 acres alongside U.S. 270, just northwest of the Pine Bluff city limits.

"Our strategy this last couple of years has been aggressively growing and trying to put in what we call comprehensive cancer center hubs," said CARTI CEO Adam Head. "Essentially, we want to provide everything a patient would need on their cancer journey."

Head said the expansion from the Little Rock headquarters began about two years ago with the construction of a care center in Conway, followed by a facility in Russellville last fall and one in North Little Rock earlier this year.

The comprehensive cancer care centers, Head said, operate as one-stop shops for almost all treatment plans, and he said the Pine Bluff location will be the largest and most comprehensive of the five centers.

"The last few years, we've seen the need to put these very accessible hubs to where we've got all of these services under one roof," he said. "We have four surgeons, and we will be providing clinic services where people can go see a surgeon at these locations. But we're going to be providing medical oncology services, radiation oncology, we'll have a myriad of imaging services like PET scans, mammography, MRI, all of the leading-edge technology, we'll have all of that available."

Head said dietitian services, pastoral care, genetics counseling and other services will be available at the new center.

"Everything a patient needs on their cancer journey is going to be available at this location," Head said. "This is our fifth comprehensive center and it's really going to be our largest to date outside of this [Little Rock] center."

According to a news release, the project will be completed in two phases, the first to be completed in December as CARTI begins treating patients at the Pine Bluff location in a modular building that will be installed on the construction site.

Phase I will include a lab, infusion suite with 12 chairs, patient consults for surgical and radiation, and patient support services, including financial counseling, social workers, nutrition and genetic counseling.

The Pine Bluff medical team will consist of experts representing each of CARTI's cancer specialties, the release said, providing a team approach to cancer treatment.

Melissa Masingill, vice president of marketing and business development at CARTI, said in an email that some CARTI treatment facilities are in or near hospitals working in partnership with those hospitals, and some are stand-alone facilities.

"These treatment facilities provide residents of often rural communities access to cancer treatment when community hospitals aren't able to provide those much-needed oncology services," Masingill said. "A few examples are our clinics in Clarksville, Crossett and Magnolia, which are located in local community hospitals. These CARTI outreach clinics are within close proximity to our cancer treatment centers, or regional hubs, so patients can easily access all comprehensive services needed."

She added that the outreach clinics are dedicated to offering quality medical care to cancer patients that is accessible and close to their homes, wherever they live in Arkansas.

According to the U.S. Centers for Disease Control and Prevention, Arkansas is number seven in the country in deaths from cancer, behind Louisiana, Alabama, Oklahoma, West Virginia, Mississippi and, at number one, Kentucky.

According to information from the University of Arkansas for Medical Sciences, CARTI, then known as the Central Arkansas Radiation Therapy Institute, was formed as a cooperative agreement when UAMS, St. Vincent Infirmary Medical Center, Baptist Medical Center and the VA Hospital came together in 1968 to help establish CARTI on the St. Vincent campus as a centralized provider of radiation therapy. At that time, the majority of radiation therapy patients were seeking treatment out of state because it was too expensive for hospitals to operate separate units.

In 1976, CARTI began treating its first patients. In April 2012, UAMS severed its relationship with CARTI, concerned that the radiation provider's newly expanded mission would present a competitive challenge to the UAMS Winthrop Rockefeller Cancer Institute, according to the Arkansas-Democrat Gazette.

Later that month, CARTI, the largest radiation-therapy provider in Arkansas, announced plans to build its comprehensive cancer care center in Little Rock, after purchasing some of the assets of Little Rock Hematology Oncology.