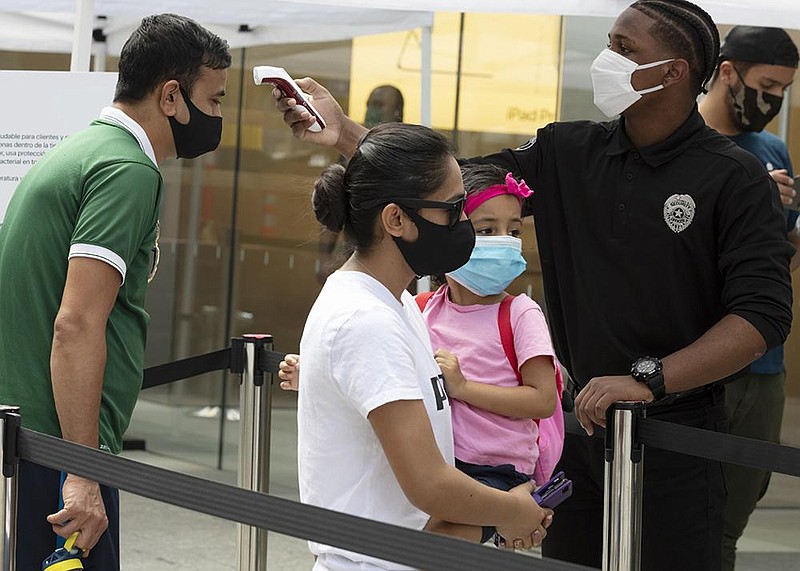 A customer gets a temperature check Saturday before entering an Apple Store in Boston. (AP/Michael Dwyer)

Governors across the country are facing increasing pressure to pass statewide mask requirements and mount a more coherent pandemic response as coronavirus cases soar to record levels, daily deaths rise and hospitals in the South and West face a crush of patients.

President Donald Trump wore a mask during a visit Saturday to a military hospital, the first time he has been seen in public with the type of facial covering recommended by health officials as a precaution against spreading or becoming infected by the novel coronavirus.

Trump flew by helicopter to Walter Reed National Military Medical Center in suburban Washington to meet wounded service members and caregivers for covid-19 patients. As he left the White House, he told reporters: "When you're in a hospital, especially ... I think it's expected to wear a mask."

A growing chorus of local officials and health experts have warned that infections could continue to spiral out of control unless governors issue public-health measures that apply to everyone.

"We've been begging for a uniform response from the state," said Mayor Chokwe Antar Lumumba, a Democrat, of Jackson, Miss., where hospital intensive-care beds were nearing full capacity.

Among other developments Saturday:

• Disney World in Orlando, Fla., reopened after having been shuttered for nearly four months, even as Florida continued to report record infections.

• The White House is pressing the Food and Drug Administration to reverse course and grant a second emergency authorization for the antimalarial drug hydroxychloroquine to treat covid-19.

The calls for more decisive leadership reflect a growing urgency at the local level as more signs emerged last week that the United States was losing its grip on the pandemic. More than 134,000 people in the country have died, and more than 3.2 million confirmed cases have been reported.

The daily death toll in the United States has recently increased after months of decline, with more than 4,200 deaths reported nationally in the past seven days and experts warning that the trend will probably worsen. Texas, Arizona and South Carolina have all seen their death tolls rise by more than 100% in the past four weeks. Five other states -- Florida, Mississippi, Tennessee, California and Louisiana -- have seen at least a 20% jump in that time span.

The situation was dire at many of the state's medical centers. Houston-area hospitals have been keeping patients in emergency rooms for longer periods as they scramble to find available, staffed beds, the Houston Chronicle reported. Several counties are buying refrigerated trailers to serve as makeshift morgues, according to the Texas Tribune.

The chief medical officer for San Antonio's Methodist Hospital, Jane Appleby, posted a video warning that young people are not immune from the virus's most serious effects. She recounted the story of a 30-year-old patient who told of attending a "covid party," where people supposedly gather to see who will get infected.

"Just before the patient died, they looked at their nurse and they said: 'I think I made a mistake. I thought this was a hoax, but it's not,'" Appleby said.

Even after the pleas for more significant action and the rising infections and deaths, many state leaders have balked at issuing more stringent requirements, saying they would be difficult to enforce.

The country's approach to the pandemic has been "a tale of two cities," said former Food and Drug Administration commissioner Scott Gottlieb. Northeastern states "sought to crush the virus," he said, while others such as Florida, Texas and Arizona tried to manage the spread to vulnerable people.

"Without a more uniform U.S. approach," Gottlieb tweeted Friday, "it'll be hard for either strategy to work."

Tension over statewide rules was on display in Louisiana on Saturday, when Democratic Gov. John Bel Edwards mandated face coverings in public for most people 8 and older in light of soaring case numbers.

Louisiana Attorney General Jeff Landry, a Republican, recently spoke out about potential mask requirements in schools, writing Thursday in a letter to education officials that such coverings should be encouraged but not required when classes resume.

Edwards' mask order takes effect Monday and allows parishes to opt out if they log fewer than 100 new cases per 100,000 people over a two-week period.

Mississippi Gov. Tate Reeves, a Republican, also imposed a mask requirement after the state recorded more than 5,600 cases in the first eight days of July. His order, announced Thursday, applies to 13 of the state's 82 counties, including some of Mississippi's largest cities.

A bipartisan group of 10 mayors from Alabama's largest cities also argued in favor of a statewide mask order, telling Gov. Kay Ivey, a Republican, that it was necessary, as cases have climbed steadily in the state. Ivey has previously dismissed the idea.

Other governors have waffled on whether to issue mask requirements, which health experts say are key for preventing transmission.

Ohio Gov. Mike DeWine, a Republican, tried to mandate masks in the spring but backed down after a torrent of criticism. He has since instituted a county-by-county approach, requiring masks only in places where health officials say the virus spread is "very high." In a front-page editorial Saturday, the Columbus Dispatch said the move was "akin to closing the barn door after the horses have escaped."

In states with statewide mask orders, governors are having trouble persuading people to comply. Dozens of counties in Texas have either refused to enforce or opted out of Gov. Greg Abbott's order to wear masks in public.

The Republican governor, whose reopening plan preceded the virus surge in Texas, said new cases were expected to keep climbing after hitting new highs this past week, and warned that the state would have to go back into a shutdown if people continued to defy the mask mandate.

Other public-health efforts by local officials have been met with push-back from governors.

In Georgia, which reported a record 4,484 new cases Friday, Atlanta Mayor Keisha Lance Bottoms, a Democrat, announced that she was rolling back the city's reopening plan to its first phase while officials try to curb the spike in cases. The move drew an immediate rebuke from Gov. Brian Kemp, a Republican, who called it "unenforceable" but stopped short of invalidating it.

In Florida, Walt Disney World's Magic Kingdom and Animal Kingdom reopened Saturday, while Epcot and Disney's Hollywood Studios are set to follow in a few days.

The reopening cocurs as a huge surge of Floridians have tested positive for the virus in recent weeks. Cases pushed past a quarter-million Saturday, as Gov. Ron DeSantis issued a defense of the state's decision to return schools to in-person classes next month.

"We know there are huge, huge costs for not providing the availability for in-person schooling for our students," he said at a news conference Saturday in Bradenton, on a day that had 10,360 more cases and 98 additional deaths, the third-straight day with at least 90 fatalities. "The risk of corona, fortunately for students, is incredibly low."

[Video not showing up above? Click here to watch » https://www.youtube.com/watch?v=kvlSZyHZm6Y]

"People say, well, kids may be the vectors in the community because that's what happens in an influenza outbreak, but it's been found over and over again, as people have looked at this and studied this, particularly in Europe, that the school children actually aren't vectors for this," he said.

"For whatever reason, they usually get infected by the parents. They usually aren't infecting adults. Places that have had schools open have not seen the schools contribute to increasing the prevalence of the virus."

The state mandate, issued by Education Commissioner Richard Corcoran, leaves the decision to local officials based on their assessment of the health risks.

"When we were getting reports of packed, party-type situations, and that was not a part of the guidelines," DeSantis said. "So right now, we're not making any changes. Status quo. We want to get that positivity rate down."

In California, deaths approached 7,000 as officials raised new alarms about rapid community spread and the grim consequences ahead if the public cannot change its behavior.

As of Saturday morning, the state's death toll stood at 6,958. Daily death totals have begun increasing after a month of spiking cases and hospitalizations tied to businesses reopening and people getting back to old habits and social gatherings.

Los Angeles County Public Health Director Barbara Ferrer said Thursday that "nothing can be off the table in the pandemic," but that she hopes "we don't have to go back there. I hope that we figure out a way to take care of each other, to be sensible about what we're doing."

Many parts of the world are facing fresh waves of infections as they try to reopen their economies.

South Africa's confirmed coronavirus cases have doubled in just two weeks to a quarter-million, and India on Saturday had its biggest daily spike as its infections passed 800,000. The surging cases are raising sharp concerns about unequal treatment in the pandemic, as the wealthy hoard medical equipment and use private hospitals and the poor crowd into overwhelmed public facilities.

Globally, more than 12.6 million people have been infected by the virus and more than 563,000 have died, according to data compiled by Johns Hopkins University.

In Kenya, some have been angered by a newspaper report that said several governors have installed intensive-care equipment in their homes.

The country lost its first doctor to covid-19 last week. "The welfare, occupational safety & health of frontline workers is a non-negotiable minimum!!" the Kenya Medical Practitioners, Pharmacists and Dentists Union tweeted after the doctor's death.

On Saturday, the union and other medical groups urged President Uhuru Kenyatta to implement a promised compensation package to ease the "anxiety and fear that has now gripped health care workers."

In India, which reported a new daily high of 27,114 cases Saturday, nearly a dozen states have imposed a partial lockdown in high-risk areas. Cases jumped from 600,000 to more than 800,000 in nine days. People are packing India's public hospitals as many are unable to afford private ones that generally uphold higher standards of care.

In Australia, the state of Victoria reported 216 new cases in the past 24 hours, down from the record 288 the previous day. It hopes a new six-week lockdown in Melbourne, the country's second-largest city with a population of 5 million, will curb the spread.

In Latin America, where inequality is sharp and Brazil and Peru are among the world's top five worst-hit countries, the pandemic is sweeping through the continent's leadership, with two more presidents and powerful officials testing positive in the past week.

Meanwhile, officials on the southern Japanese island of Okinawa said dozens of U.S. Marines have been infected at two bases there in what is feared to be a large outbreak. The officials said the military asked that the exact figure not be released.

Information for this article was contributed by Derek Hawkins, Marisa Iati and Mark Berman of The Washington Post; by Jonathan Lemire, Cara Anna, Tamara Lush and Mike Schneider of The Associated Press; by Luke Money and Leila Miller of The Los Angeles Times; and by David Fleshler of the [Florida] Sun Sentinel. 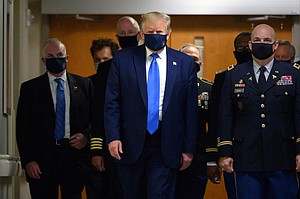 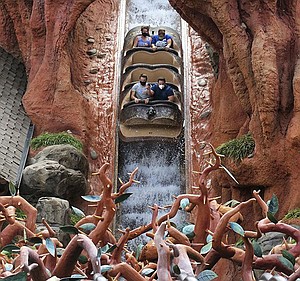 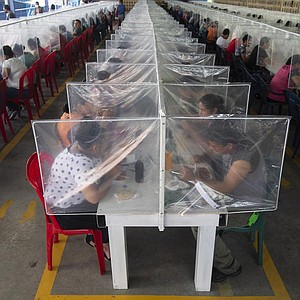 Photo by AP
Workers break for lunch Friday, separated by plastic panels, at the Korean-owned firm K.P. Textil in San Miguel Petapa, Guatemala. Em- ployees returned to work after a quarantine of more than a month. (AP/Moises Castillo)