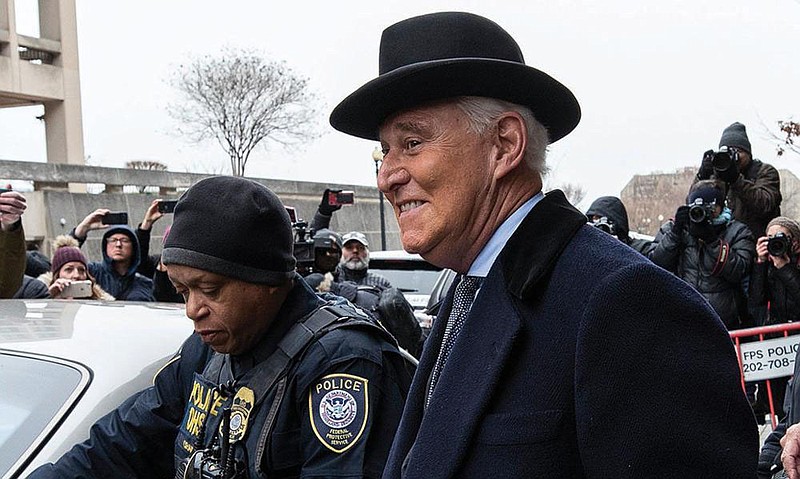 Roger Stone leaves federal court Feb. 20 in Washington after he was sentenced to more than three years in federal prison. In a statement Friday announcing commutation of his sentence, the White House said that “Roger Stone has already suffered greatly.” (AP/Alex Brandon)

WASHINGTON -- President Donald Trump commuted the sentence of his longtime political confidant Roger Stone on Friday, just days before Stone was to report to prison.

Stone, 67, had been sentenced in February to three years and four months in federal prison for lying to Congress, witness tampering and obstructing the House investigation into whether the Trump campaign colluded with Russia to win the 2016 election. He was to report to prison by Tuesday.

A commutation does not erase Stone's felony convictions in the same way a pardon would, but it protects him from serving prison time as a result.

Stone told The Associated Press that Trump had called him earlier Friday to inform him of the commutation. Stone was celebrating in Fort Lauderdale, Fla., with friends and said he had to change rooms because there were "too many people opening bottles of Champagne here."

Democrats were angered by Trump's move, with House Intelligence Committee Chairman Adam Schiff calling it "offensive to the rule of law and principles of justice," and Democratic National Committee Chairman Tom Perez asking, "Is there any power Trump won't abuse?"

In a statement released late Friday evening, the White House denounced the prosecution against Stone on what it called "process based charges" stemming from "the Russia Hoax" investigation. "Roger Stone has already suffered greatly," the statement said. "He was treated very unfairly, as were many others in this case. Roger Stone is now a free man!"

"These charges were the product of recklessness borne of frustration and malice," the statement said. "This is why the out-of-control [former special counsel Robert] Mueller prosecutors, desperate for splashy headlines to compensate for a failed investigation, set their sights on Mr. Stone."

The statement did not argue that Stone was innocent, only that he should not have been pursued. "The simple fact is that if the special counsel had not been pursuing an absolutely baseless investigation, Mr. Stone would not be facing time in prison," it said.

Stone told the AP that the president did not mention the statuses of Flynn or his former campaign chairman, Paul Manafort, also ensnared in the Russia probe.

"What am I going to do now? I am going to work as hard as I can to make sure that Mike Flynn gets final justice," Stone said. "Mike Flynn is an American war hero, and he's done absolutely nothing wrong."

After the commutation was announced, Grant Smith, a lawyer for Stone, said: "Mr. Stone is incredibly honored that President Trump used his awesome and unique power under the Constitution of the United States for this act of mercy. Mr. and Mrs. Stone appreciate all the consideration the president gave to this matter."

Stone had been open about his desire for a pardon or commutation, appealing for the president's help and seeking to postpone his surrender date by months after getting a brief extension from the judge.

Trump had repeatedly publicly inserted himself into Stone's case, including just before the sentencing, when he suggested that Stone was being subjected to a different standard than several prominent Democrats.

Trump earned a public rebuke from Attorney General William Barr, who said the president's comments were "making it impossible" for him to do his job.

Schiff said the commutation demonstrated the corruption of the Trump administration.

"With this commutation, Trump makes clear that there are two systems of justice in America: one for his criminal friends, and one for everyone else," he said. "Donald Trump, Bill Barr and all those who enable them pose the gravest of threats to the rule of law."

Stone, a larger-than-life political character, was the sixth Trump aide or adviser to have been convicted of charges filed as part of Mueller's investigation into Russian interference in the 2016 election.

A longtime Trump friend and informal adviser, Stone had boasted during the campaign that he was in contact with WikiLeaks founder Julian Assange through a trusted intermediary and hinted at inside knowledge of WikiLeaks' plans to release more than 19,000 emails hacked from the servers of the Democratic National Committee.

But Stone denied any wrongdoing and consistently criticized the case against him as politically motivated. He did not take the stand during his trial nor speak at his sentencing, and his lawyers did not call any witnesses in his defense.

Prosecutors had originally recommended that Stone serve seven to nine years in federal prison. But Barr reversed that decision after a Trump tweet and recommended a more lenient punishment, prompting a revolt in the Justice Department, with the entire prosecution team resigning from the case.

Department officials have vehemently denied that Barr was responding to Trump's criticism and have insisted that there was no contact with the White House over the decision. Barr has also pointed out that the judge, in imposing a 40-month sentence, had agreed with him that the original sentencing recommendation was excessive.

Barr, who was attorney general during Stone's trial last fall, has said the prosecution was justified, and the Justice Department did not support Stone's more recent effort to put off his surrender date.

Though the Justice Department raised concerns about the handling of Flynn's case, including what it said were irregularities about his FBI interview, prosecutors did not point to any similar issues or problems with the Stone prosecution.

The commutation was the latest example of Trump using his unlimited clemency power.

Trump has also offered clemency to other political allies, including Maricopa County Sheriff Joe Arpaio, who was awaiting sentencing at the time; conservative commentator Dinesh D'Souza, who had been convicted on campaign finance violations; and Conrad Black, a newspaper publisher convicted of fraud who had written a positive book about the president.

Trump, however, has spent much more time trumpeting his decision to commute the sentence of Alice Marie Johnson, who was serving life in prison for nonviolent drug offenses and who came to Trump's attention after reality star Kim Kardashian West took up her cause. Her story was featured in a Trump campaign Super Bowl ad.

Stone told the AP that he expressed his gratitude to the president in the phone call.

"You know, he has a great sense of fairness," Stone said. "We've been friends for many, many years, and he understands that I was targeted strictly for political reasons."

The debate over clemency for Stone has raged in the White House for months. Among those who advocated on behalf of it from outside the building were Tucker Carlson, the Fox News anchor, and Rep. Matt Gaetz, R-Fla., according to people familiar with the discussions.

Within the White House, Stone had few allies. Many Trump aides who knew him from the campaign did not like him, were envious of his long relationship with Trump or thought clemency would be bad politics.

Mark Meadows, the White House chief of staff, expressed concern about possible political damage, according to two people familiar with the discussions, although he has left people with different impressions about where he stands.

The same is true of Jared Kushner, Trump's son-in-law and senior adviser, who has been involved in most of the clemency discussions throughout the past three years.

Pat Cipollone, the White House counsel, was concerned about intervening on Stone's behalf, according to the people close to the discussions.

One of the few in the White House who backed clemency was Larry Kudlow, the president's top economic adviser and an old friend of Stone. Kudlow spends more time with Trump than do many other advisers.

Information for this article was contributed by Jill Colvin and Eric Tucker of The Associated Press; and by Peter Baker, Maggie Haberman and Sharon LaFraniere of The New York Times. 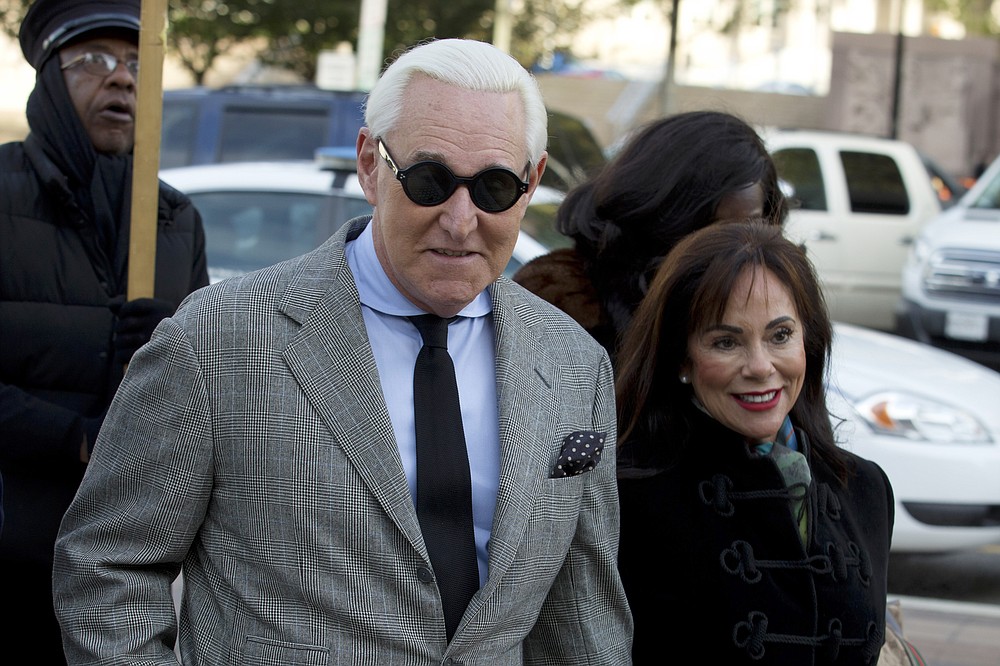 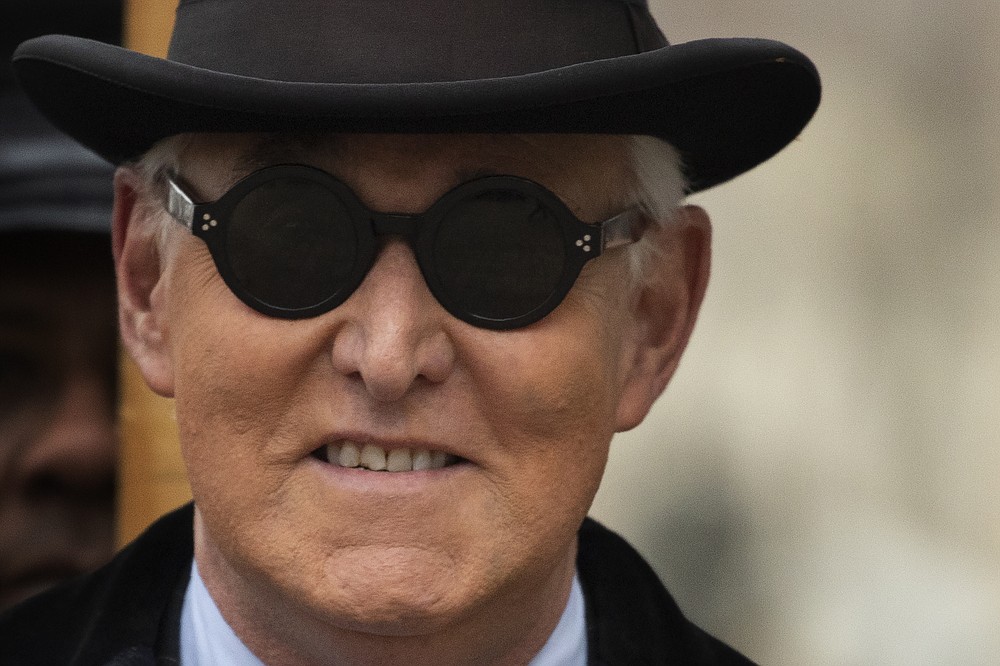 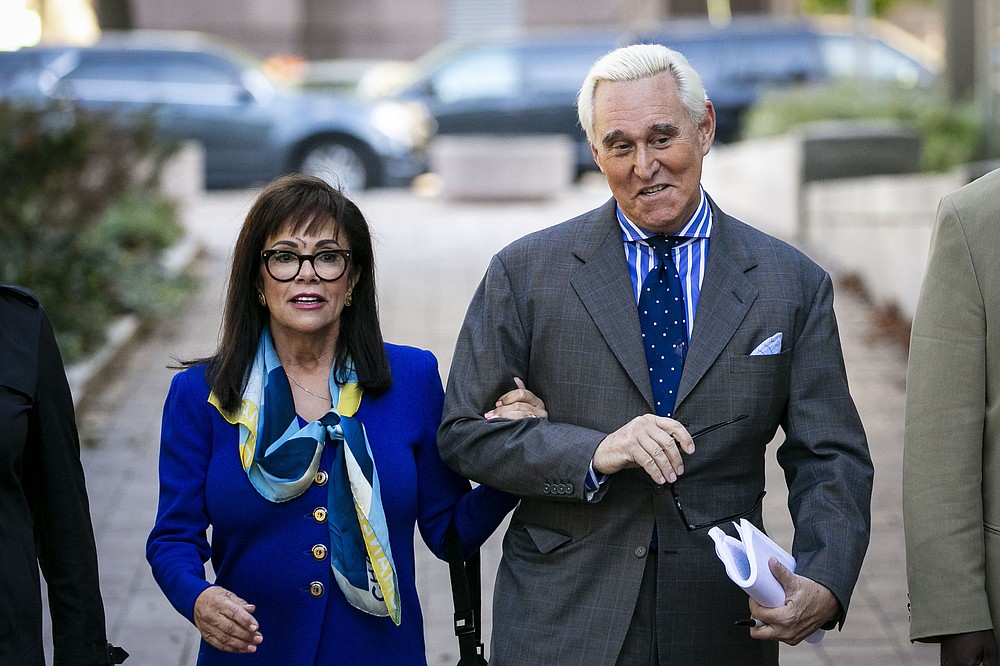 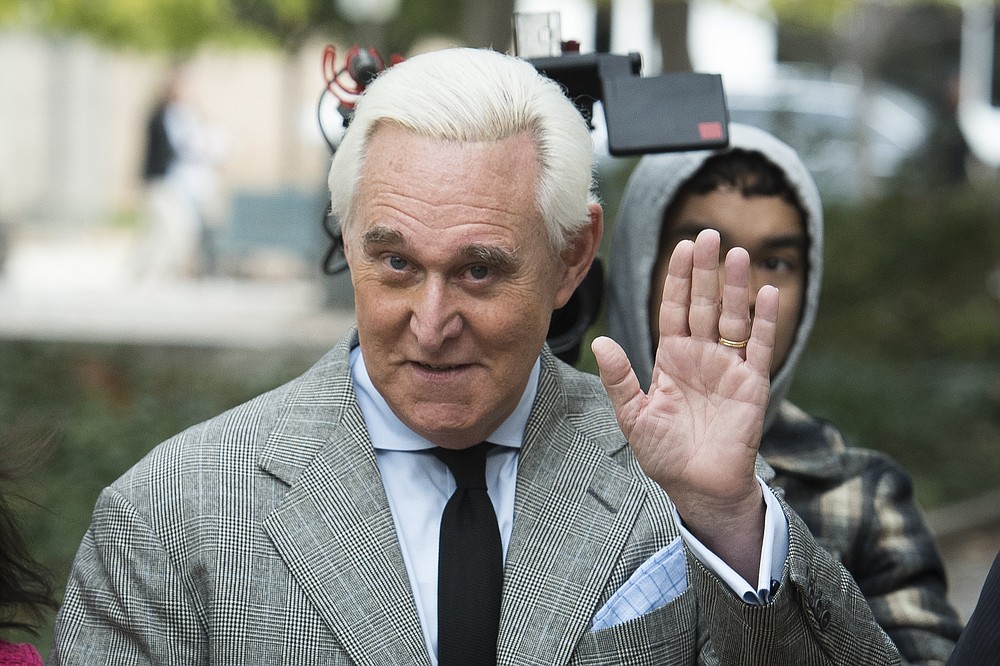