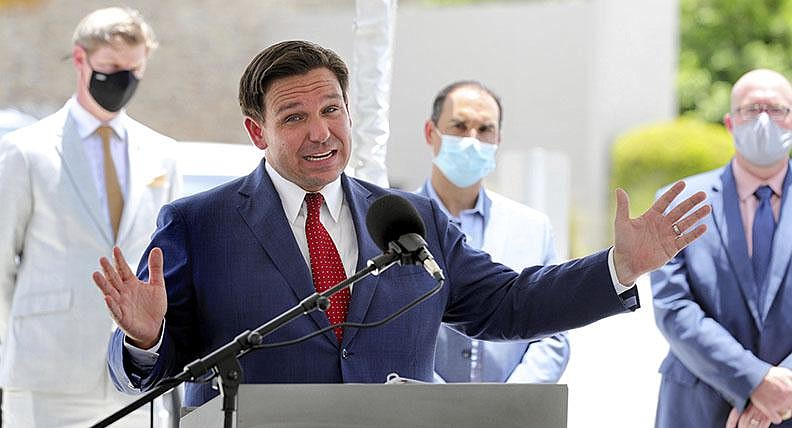 The daily number of deaths from the coronavirus has risen recently in some of the nation's most populous states, leaving behind grieving families and signaling a possible end to months of declining death totals nationally.

In Texas, officials announced 119 deaths on Wednesday, surpassing a daily record for deaths in the pandemic that the state had set only a day earlier. In Arizona, more than 200 deaths have been announced already this week, and the daily toll in the state reached higher than ever. Mississippi, Florida and Tennessee also set single-day death records this week.

Among those who died of the virus in recent days was a 30-year-old man from Nashville, Tenn., who played the organ in church; a 39-year-old mother from St. Augustine, Fla., who told her six children goodbye on a hospital speaker phone; and a 91-year-old grandmother from Dallas, who played a mean game of dominoes.

The seven-day death average in the United States reached 608 on Thursday, up from 471 earlier in July but still a fraction of the more than 2,200 deaths the country averaged each day in mid-April, when the situation in the Northeast was at its worst.

Some health experts cautioned that it was too early to predict a continuing trend from only a few days of data. But Friday, Dr. Deborah Birx, the White House's coronavirus response coordinator, said she expects to soon see an increase in deaths.

"In the United States, we have increased number of cases over the last particularly three weeks," Birx said during a virtual panel on the virus organized by the International AIDS Society. "We have not seen this result in increased mortality, but that is expected as the disease continues to spread in some of our large metro areas where comorbidities exist."

The rising pace of deaths in the Sun Belt followed weeks of mounting cases in the region and suggested an end to the country's nearly three-month period of declines in daily counts of virus deaths -- a pattern that had been seen as one of the bright spots in the nation's virus outlook.

That steadily downward trend in daily deaths began in April after states instituted stay-at-home orders, and it continued through June after states reopened their economies. The decline had continued over the past month even as cases of the virus grew in the South and West.

[Video not showing up above? Click here to watch » https://www.youtube.com/watch?v=f1uDbObybso]

Deaths occur weeks after infections, so any rise in deaths would be expected to come later than a rise in cases. But public-health experts said the diverging trends -- newly rising cases but still declining daily deaths -- had occurred largely because the new surge of virus cases also involved many younger and healthier people, who were less likely to become seriously ill or die.

Still, many experts predicted that the declining death tolls were unlikely to last because the young would spread it to older people and those more vulnerable.

"We've always said the deaths are going to be coming soon enough, and now they are," said Dr. Peter Jay Hotez, dean of the National School of Tropical Medicine at Baylor College of Medicine.

Dr. David Lakey, a former commissioner of the Texas Department of State Health Services and a member of a coronavirus task force created by the Texas Medical Association, said it was too early to tell if this week's rise in the daily death toll in Texas will continue.

Gallery: Coronavirus pandemic in the U.S.

He said that reporting delays by officials over the July Fourth weekend might have contributed to an appearance of elevated numbers of deaths in Texas this week. But he also noted that hospitals in the state were filling quickly, a sign that there was a growing number of seriously ill patients.

Some officials have attributed the drop in deaths over the past few months to improvements in treatment for the virus. Doctors have more tools today than they did in the spring, including the use of remdesivir, an anti-viral drug that has been shown to shorten hospital stays though not reduce fatalities.

In New Orleans, a city that was hit hard by the virus in the spring, public-health officials said that they had seen a steep decline in the daily death toll, which they attributed to increased public awareness, improved medical techniques, and younger patients. But doctors said they were seeing signs that young people were starting to infect their parents and grandparents.

"There's a cavalier sense out there that it is not a problem because these are young people and their outcomes are better, on average," said Dr. Joseph Kanter, lead public-health official for the Louisiana Department of Health in New Orleans. "These young people have families," he said. "They have older people that are living in their houses."

Hospitalizations in New Orleans fell from more than 1,000 in April to 69 on June 20. But they have begun to creep back up, to 125 this week. Most were older, Kanter said. He said he feared that the city would see a corresponding uptick in deaths in the coming weeks.

Nashville, Tenn., has had a deluge of new cases, but daily deaths have risen only slightly.

Dr. Alex Jahangir, chairman of a coronavirus task force for the Nashville area, said that experts noted a rise in cases tied to bars and parties -- and young people -- in recent weeks.

Out of more than 13,000 people known to have had the virus in Davidson County, which includes Nashville, at least 138 have died. About 100 of those victims were older than 65.

If new infections continue to be concentrated among the young, Jahangir said he does not expect the daily death toll to go up by much. If young people spread the virus to older family members, he said, then the death toll could climb significantly.

The statistics mean little, though, to those who have lost relatives to the virus, including some younger people seen as less vulnerable.

Darius Settles, 30, died suddenly last weekend from the virus, one of two people younger than 44 to die in the Nashville area since the pandemic began, officials said.

"It was just really, really shocking," Deja Settles, his younger sister, said. "I never thought that this was going to hit this close to home."

In Florida, from Miami to Jacksonville and Tampa, hospitals in June and July have seen their numbers of coronavirus patients triple, with new patients outpacing those being discharged.

A record 435 newly hospitalized patients were reported Friday to have tested positive for the virus, including some who sought care for other reasons and aren't necessarily symptomatic. There were 6,806 patients being treated for covid-19 in Florida hospitals, according to a new tally that state officials started releasing Friday. Before that, available data showed only overall hospital occupancy and capacity, including noncoronavirus patients.

Hospital networks are scrambling to hire more health care workers to expand their covid units. Last week, hospitals in several cities announced that they would again halt or reduce nonemergency procedures to free up space.

"We thought maybe we could keep this thing under wraps. And that worked for a little bit of time," Dr. Jason Wilson, an emergency physician at Tampa General Hospital, said during a conversation with Tampa Mayor Jane Castor that was livestreamed Wednesday on Facebook. "But eventually ... it caught up to us."

Wilson and other health experts believe the spike was sparked in large part by young people who weren't experiencing symptoms and were more likely to take fewer precautions while gathering at reopened bars and crowded beaches.

"We saw the floodgates open really for young people having what we call asymptomatic or presymptomatic spread," he said. "Three weeks later, we are starting to see everyone else starting to get the virus as well."

Separately, in an effort to get schools and colleges to reopen this fall, President Donald Trump is again taking aim at their finances, this time threatening their tax-exempt status.

Trump said Friday on Twitter that he was ordering the Treasury Department to reexamine the tax-exempt status of schools that provide "radical indoctrination" instead of education.

"Too many Universities and School Systems are about Radical Left Indoctrination, not Education," he tweeted. "Therefore, I am telling the Treasury Department to re-examine their Tax-Exempt Status and/or Funding, which will be taken away if this Propaganda or Act Against Public Policy continues. Our children must be Educated, not Indoctrinated!"

The president did not explain what prompted the remark or which schools would be reviewed. But the threat is just one more that Trump has issued against schools as he ratchets up pressure to get them to open this fall. Twice this week Trump threatened to cut federal funding for schools that don't reopen, including in an earlier tweet on Friday.

It's unclear, however, on what grounds Trump could have a school's tax-exempt status terminated. The White House and Treasury Department did not immediately comment on the president's message.

Previous guidance from the Internal Revenue Service lays out six types of activities that can jeopardize a nonprofit organization's tax-exempt status, including political activity, lobbying and straying from the organization's stated purpose.

Elsewhere, after a six-week return to pre-covid activity that included the reopening of schools, gyms, restaurants and bars, Hong Kong, a city of 7 million, is taking a big step back.

Dozens of new infections have surfaced in the past week, and on Thursday, the government reactivated social-distancing restrictions at restaurants, pubs and bars. Friday it announced an "early summer holiday" for schools, which are still in session.

By midday, shoppers were lining up at drugstores and supermarkets to stock up on masks and toilet paper, evoking scenes from when the virus first flared in the Asian financial hub in March.

"It's terrible when you wake up, read the news, and realize you are back to the nightmare you've been through several months ago," said Karen Cheung, who works as a project manager at a Hong Kong construction company. "That's how I feel this week -- we have to avoid all the fun things again, stay home and continue to live in the horror."

The city reported 32 locally transmitted cases on Friday, after posting 34 on Thursday, the most in a single day since the pandemic began. That the virus is taking hold again in the community -- and at unprecedented levels -- is troubling, public health experts say.

The school closures, though, are a particular blow to families and working parents in particular. Students had only just gone back into the classroom in late May after months of learning at home.

"I feel the virus outbreak will continue to affect our life for quite a long time," said Lucy Zhou, whose 6-year-old daughter goes to an international school. The government should consider school closures on a case-by-case basis, she said, so some schools might be able to stay open.

"I'm worried about my kid's mental health and her social skills if she continues to stay home and just have conversations with adults," she said. "It's terrible for kids her age to live in such an abnormal situation for a long time."

Information for this article was contributed by Farah Stockman, Mitch Smith and Giulia McDonnell Nieto del Rio of The New York Times; by Collin Binkley, Adriana Gomez Licon and Kelli Kennedy of The Associated Press; and by Bloomberg News.