This American life: Well-staged ‘Hamilton’ not a bad choice for its historical accuracy, music, performances 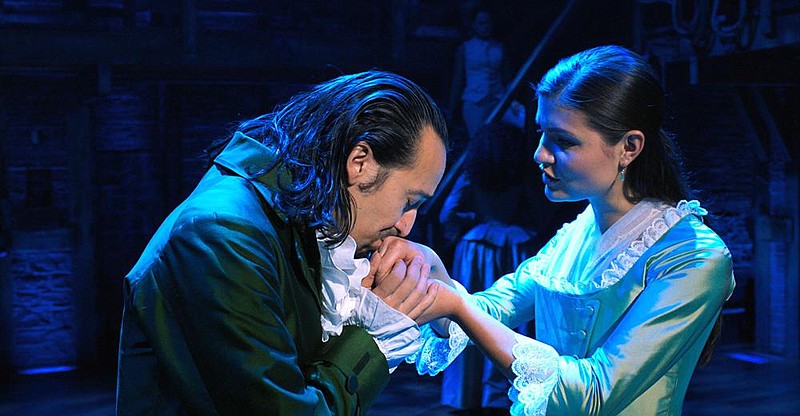 I was a "Hamilton" skeptic.

Over the past four years many of my friends have seen the stage production of "Hamilton: An American Musical." Some made pilgrimages to New York specifically to see the show. Some have paid upwards of $800 for a seat. Some have seen it several times. Universally, they praised the production, both for the quality of its execution and for the high-mindedness and excellence of its content. It was more than a great show, they all said, it was an experience they'd wish for every American, a witty and poignant re-telling of one of our nation's central myths.

I put this down as the hyperbolic wishfulness of someone who has just paid a lot of money to see the latest inevitable exploding cultural moment. Although I never inquired about getting tickets for it, I thought "Hamilton" must be a nice musical, if you like musicals.

Having heard some of the numbers from the show out of context via the original Broadway cast album (which came out in 2015, in a very different country than the one in which we now live), I found them pleasant enough, if somehow soft. On more than one occasion, I likened the music from "Hamilton" to "your granny's favorite hip-hop album."

I thought "Hamilton" might be amusing and looked forward to seeing a roadshow production of it someday. Sort of.

While trying hard not to rain on the enthusiasm of the true believers -- "Find someone who looks at you the way Lin-Manuel Miranda looks at everyone," someone recently Tweeted -- I suspected that I would find plenty of fault with "Hamilton" and wouldn't be able to resist nitpicking its historical accuracy or wisecracking about what I assumed would be a certain "Schoolhouse Rock"-iness of the material.

This was before, like a lot of you, I finally saw "Hamilton" via the Disney+ streaming service last week. The streaming version was assembled by filming two performances of the show on consecutive nights in 2016, with a few of the scenes later restaged specifically so cinematographer Declan Quinn's cameras could cover other angles.

So the "Hamilton" that's now streaming is not just faithful to the Broadway performance, it is the Broadway performance electronically jiggered a bit. Instead of watching the show from a single fixed point in the audience, you are given the occasional close-up (especially arresting in the case of Jonathan Groff as King George III, whose pancaked countenance glows with spite and contained vitriol as he literally spits his way through the chillingly lovely ballad "You'll Be Back") and reverse angle.

If anything, the filmed version allows for at least the illusion of an enhanced intimacy with the performers -- we see their sweat and heaving chests, we can sense how hard they work to maintain the illusion of effortlessness.

Still, having not seen the show in person, I can't definitively say the film is an improvement -- theater is, like movie-going and sports, a civic ritual and there are positive aspects to having groups of strangers congregate for a common purpose -- but watching the Disney+ version of "Hamilton" on a decent-size screen with a decent sound system and closed captions turned on is not a bad way to spend a warm Friday afternoon in July. (And I recommend the captions, especially for those who aren't used to apprehending the rapid-fire flow of an expert hip hop artist, which several of the cast members seem to be.)

I will admit that one of what I thought were the advantages of watching it at home is the possibility of pausing or stopping it after a while and coming back to it later. That's how we consumed Martin Scorsese's three-and-a-half-hour "The Irishman," and I don't think splitting it into two nights made our experience with the film any less authentic.

But when the intermission card (a one-minute countdown between acts) came up, we paused "Hamilton" and dutifully took 15 minutes outside with our dogs before returning to the show. We couldn't imagine boxing up the leftovers and heating them up at a later date.

As for the story, it has long been our position that people who get their history from popular entertainments get the sort of history they deserve. I generally allow creators to commit all sorts of historical atrocities in the pursuit of an entertaining story -- I love the Hulu series "The Great," but I don't think it has anything to do with the historical Catherine the Great and Peter III, who exist for me as single-paragraph caricatures in the "Russian History for Dummies" picture book of my mind.

But I know a little bit about Alexander Hamilton, who if not my favorite founding father is at least (a quick check of newspaper's archives confirms) my favorite one to quote. And if all you know about "Hamilton" is what you learn from the Disney+ film, well, you get the gist of things. There are a few compressions and Miranda takes a few poetic liberties, but mostly the facts and the characterizations of the relationships between the characters are either right on or plausible interpretations of the known facts.

Hamilton probably was a lot like the character Miranda plays in the film; the Aaron Burr (Leslie Odom Jr.) character is certainly very close to the way Hamilton saw his longtime rival and sometimes collaborator.

(In Gore Vidal's "Burr," the 1973 novel that might serve as a useful counter-weight to "Hamilton," the oft-demonized Burr is portrayed as an honorable man, more worthy than any of the other founders, especially the opportunistic bastard Hamilton who wouldn't have amounted to anything without the patronage of a corrupt George Washington, "a lousy general with the hips, buttocks and bosom of a woman." As the song goes, "Who lives, who dies, who tells your story?")

This, obviously and famously, is Hamilton's story, and Miranda distilled it from the excellent 2004 biography by Ron Chernow.

Chernow imagined Hamilton as "a famous word machine," and the musical/movie carries on this theme, artfully incorporating contemporary hip-hop (I caught allusions to LL Cool J, Mobb Deep, Biggie, DMX and Eminem) into the traditional Sondheim-ish codes of musical theater.

Two of Miranda's more brazen nods to show-tune geekiness are to "South Pacific" --"I'm with you but the situation is fraught/ You've got to be carefully taught," Burr sings in a number set in a pre-revolutionary tavern) -- and Gilbert and Sullivan's "The Pirates of Penzance," when George Washington (Chris Jackson) introduces himself as "the model of a modern major general/ the venerated Virginian veteran whose men are all/ Lining up, to put me on a pedestal."

Much has been made of "Hamilton" being the story of America told by a polyglot cast that looks (and performs) like America now and the America to come. And it's not just Black and brown folks who claim center stage; women have prominent roles too. "Let me be part of the narrative," sings Hamilton's wife, Eliza Schuyler (Phillipa Soo), in "That Would Be Enough." All right, lady, with those pipes you're in.

Maybe in 50 years, the mental image of Thomas Jefferson on reserve in our collective consciousness will look more like the dandyish character Daveed Diggs portrays than Gilbert Stuart's Edgehill portrait. Already, my image of Hercules Mulligan has been colonized by Okieriete Onaodowan's athletic, prowling, snarling portrayal of the new nation's first spy.

"Hamilton" is a beautiful show, a work of uncommon intelligence and musical dexterity performed with vitality and grace by a company of subtle but commanding actors. It will stir you and crush you -- a couple of times deep in the play I found myself choked with emotion. Like somebody once said, a man goes to the movies, you cannot deny the tears that come unbidden or the hope that rises suddenly in your heart.

Rating: PG-13, for language and some suggestive material 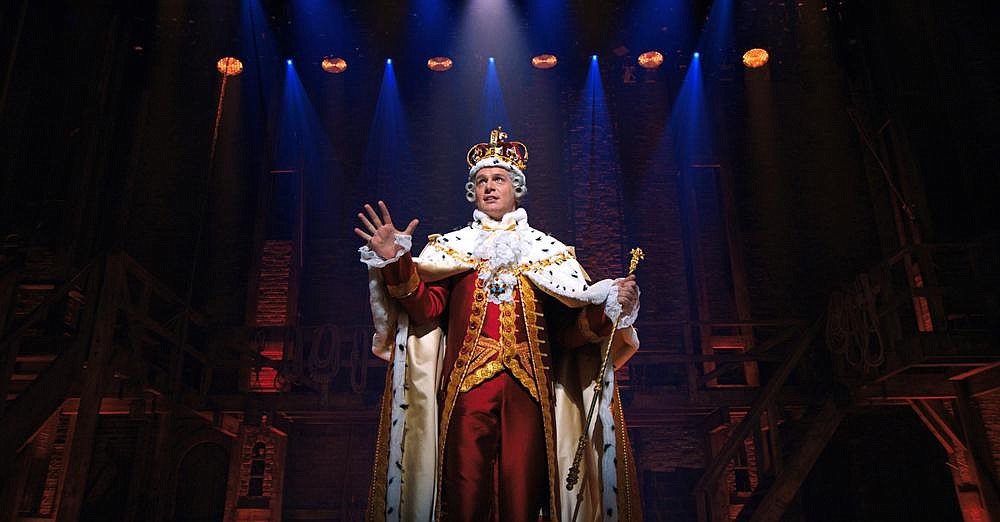 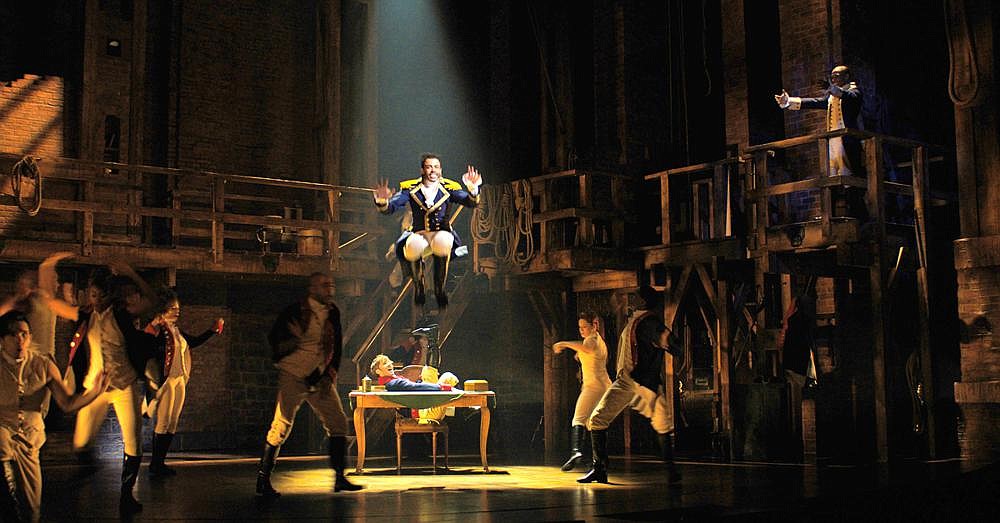 The enthusiastic French Marquis de Lafayette (Daveed Diggs, who also plays Thomas Jefferson in the production) pledges his life and honor to the cause of American liberty in “Hamilton.” Diggs won a best supporting actor Tony for his role in the Broadway production of the musical in 2016.
ADVERTISEMENT