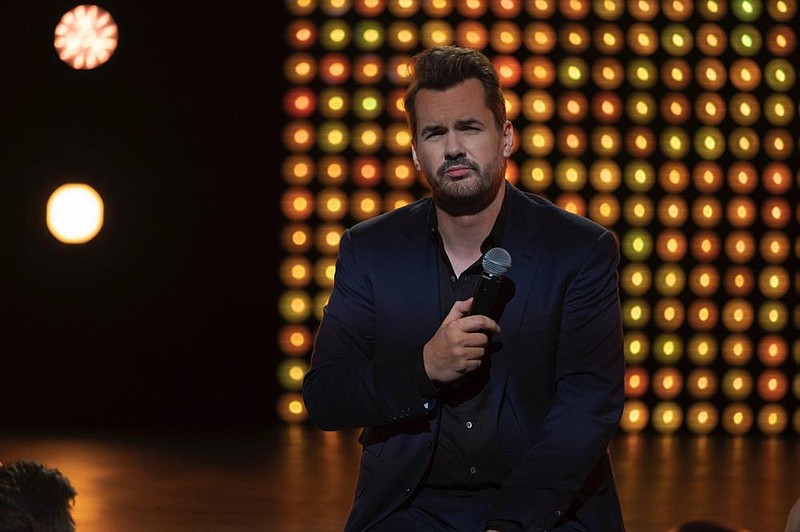 We may be days away from cinemas like AMC Theatres and Cinemark reopening, but "Tenet" and "Mulan" got bumped (again), so for the conceivable future, we're still watching streaming content. Imagine my surprise when Netflix debuted yet another stand-up comedy special this week.

It's called "Jim Jefferies: Intolerant," which turned out to be a more fitting name than I think this comedian intended because little of his material was tolerable, both from perspectives of humor and base-level humanity.

You may recall I reviewed another Aussie comedian a few weeks back. It was "Hannah Gadsby: Douglas," and she freakin' slayed. And what I wished more than anything after watching Jim Jefferies perform tonight was that I could just sit him down in the same room as her and say, "Hey Hannah ... this guy has the potential to be funny, but he's just misfiring a lot. Can you give him a few pointers?"

It would be a straight up lie for me to say I didn't laugh once during this comedy special. In fact, I laughed quite a few times.

Jefferies started off strong. I loved his anecdotal humor about his father voting to legalize same-sex marriage in Australia. All those stories were A+. And if the rest of the special would have been nothing but that, I'd have given it two thumbs up.

But then he went into a little rant about how millennials are the worst (and hey, as a millennial gal, I can't disagree*), and that's when I saw what the bulk of his remaining material would be ... rants. Tiresome, unfunny, uninspired, rants.

You'll notice I put an asterisk about my statement about millennials being the worst. It's because I wanted to come back to that. You see, we are the worst. But so is Gen Z, Gen X, the Boomers, and all of humanity. All of humanity is the worst. I see it every day on Twitter. So don't act like we've got the sole patent for being trash humans, not after I watched a video of a guy screaming, "I feel threatened!" in Costco last Tuesday.

Call my generation trash. I don't care. That's not what bothers me. What bothered me was in this comedy special that was over an hour long, this comedian would routinely interrupt his stories, which were funny, to go off on five-minute tangents, which weren't funny.

His bit about millennials taking selfies? Dated. That was old material five years ago. And it was sure as hell old last week when George Lopez said it in his standup. Millennials take lots of pictures with their phones. That's the joke. Jim Jefferies is 41, but he sounds like a Boomer when he goes through this material.

The transgender bits might be a copyright violation. Could have sworn a few other folks have done that same routine. All Jefferies was missing was an "I identify as an attack helicopter" joke. And he got pretty close.

It was after his transgender bit where he discussed how millennials would one day become the "old bigots," that I realized I'd heard this before ... in an episode of "The Simpsons." Homer's dad said, "I used to be with it. Then they changed what 'it' was. Now what I'm with isn't 'it.' And what's 'it' seems weird and scary to me. It'll happen to you."

And after I remembered that scene, I realized what Jim Jefferies reminded me of in his stand-up special. He reminded me of a drunk man ranting at the bar who thinks he's funnier than he actually is.

Full disclaimer, I know standup comedy is hard. I've done a couple five-minute sets. I wasn't perfect, and Jim Jefferies is definitely more skilled than I am. He has great timing, and his motions are hilarious. As I said, the potential to be funny is clearly there. The man just needs to cut out about 89% of his rants and stick to anecdotes.

You can tell he's ranting because it sounds like he's yelling all throughout the standup special. And he's all over the place. There were just so many wrongs he had to right, from going after the body positivity crowd to defending cocaine addicts. And at one point, he had to describe goose torture in extensive detail. Not really sure what the payoff was, but his description of medical testing was spot on.

I found the greatest irony in his jokes to be his recognition that there's a line comedians aren't supposed to cross with their material. And he had a valid point about values changing over time.

But then he had to go into some truly distasteful material saying, "I like the Asians," and talking about how they pick an accent and stick with it. Then, yeah, he did a terribly racist impression of an Asian American server at a restaurant. I cringed.

There was this bizarre mentality with Jim Jefferies. It was like, when it came to "crossing the line," the man seemed to think that because he was "progressive" in one area, he could cross the line in another without criticism. He said he was cool with the gays, so that allowed him to do some transphobic jokes. Jefferies said blackface was wrong, so he was free to do a racist Asian impression.

At one point in the special, Jefferies just seemed to have a need to waste five minutes of his standup complaining about people who have complained about some of his past jokes. It came off as solid evidence of Jefferies having thin skin. When you need to take five minutes of your special to rant about people who have ranted about you, it seems petty, like you have to have the last word.

You want to know what would send a stronger message to people that hate your humor? Ignore them. Addressing those folks in future material gives them power.

And he continued to dance around that so-called line. Jefferies acknowledged at one point he used to tell a lot of misogynistic jokes. So he clearly recognizes that kind of unfunny material. Then he just goes ahead and makes a misogynistic joke about how women age horribly. And "women like drama because they cause drama."

Acknowledging problematic humor before committing problematic humor isn't brilliant writing. That just makes you an edgelord. Jefferies went from joking about Michael Jackson having sex with children to making fun of a woman with Parkinson's disease. Jesus Christ, man. Burn some puppies on stage, and see if it makes the audience laugh.

But his anecdotes were funny. Woven throughout the bulk of his special was a story about a date he'd gone on and consumed dairy, needing to rush home and use the bathroom. When he stopped ranting long enough to discuss his girlfriend interrupting the trip home to buy lotion, Jefferies was magically funny again.

Then he had to pause to rant about how the 2016 "Ghostbusters" reboot was terrible. Sure, he's right. It was an awful movie. But I don't need a comedian to waste three minutes of my life rehashing thoughts I put on Facebook four years ago.

The standup special really shouldn't have been called "Intolerant." It should have been titled the "Things That Annoy Me" tour.

After the special concluded, I wanted to pull Jim Jefferies aside and (while standing six feet away) ask, "Who hurt you?"

Stick to your stories, and save the rants for Facebook, big guy. Oh, and don't forget to retire that Asian accent bit. It's atrocious, mate.

CORRECTION: The name of Jim Jefferies' comedy special is "Jim Jefferies: Intolerant." An earlier version of this article misstated the name of the special. Jefferies' last name was misspelled in a photo caption.