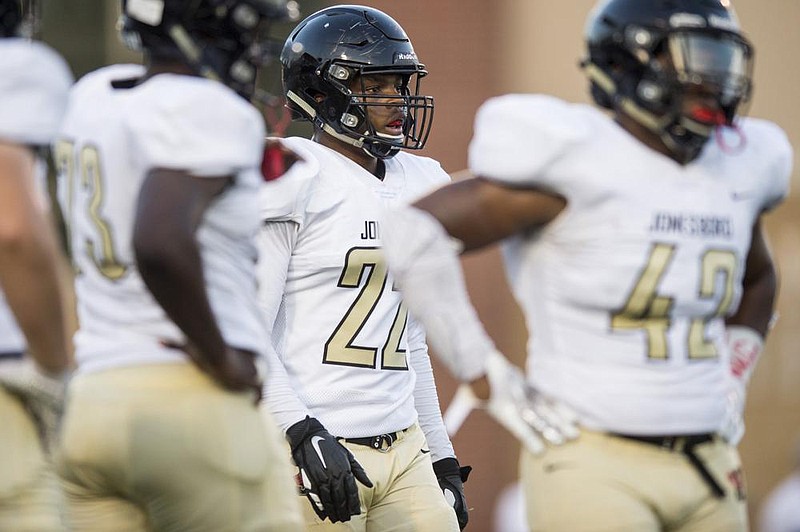 Jashaud Stewart hasn't let the coronavirus pandemic slow him down.

The former Jonesboro standout prepared earlier this summer for his college football career at the University of Arkansas by doing cardio and conditioning drills and working out with his weight set at his home.

"I'm really ready to get back in pads," Stewart said. "I'm ready to work out with the team."

Outside of training, Stewart said he was disappointed with not being able to enjoy the normal activities the last few months that a high school senior would have typically.

"It's very tough," Stewart said. "Not being able to go to prom sucked. I had never gone to prom. A lot of stuff was closed down."

Jonesboro Coach Randy Coleman coached Stewart for the past three seasons. He said Stewart's determination will make him successful at Arkansas.

"He's one of those self-motivators," Coleman said. "He's got a built-in chip on his shoulder. It drives him. He wants to be better than the year he had before."

Arkansas and Coach Sam Pittman is getting one of the state's top high school football players.

Stewart, a three-star prospect by Rivals, 247Sports and ESPN.com, was the Arkansas Democrat-Gazette's All-Arkansas Preps Defensive Player of the Year for the 2019 season. He recorded 114 tackles (85 unassisted), including 23 for a loss, 17 sacks, 3 forced fumbles and 2 fumble recoveries as the Hurricane went 8-4 and advanced to the Class 6A quarterfinals, losing at Benton.

The 17 sacks by Stewart led the state, as he was a tough matchup for offenses. Jonesboro allowed 16 points per game defensively.

As a junior, Stewart had 89 tackles (65 unassisted), including 24 for a loss, 6 sacks, 4 fumble recoveries, 3 forced fumbles and an interception.

Less than two weeks after Pittman was hired, Stewart signed with the Razorbacks in the early signing period. Stewart is one of three Jonesboro High players to be in the Razorbacks football program, along with redshirt sophomore offensive lineman Noah Gatlin and redshirt freshman linebacker Asa Shearin.

Stewart chose Arkansas over Houston, Kansas, Memphis and SMU, among others.

In an unorthodox year where covid-19 has affected college athletics, Stewart is hopeful that he'll able to contribute this fall in his freshman season. He's played defensive lineman in high school and is expected to stay there. But Stewart mentioned there could be a possibility of him being moved to linebacker, a position he has never played, he said.

"My goals are are to come in and make an impact," Stewart said. "Whatever I need to do to help, I'll do it. I'll play anywhere they need me to play."

Pittman, who was an offensive line coach at Arkansas from 2013-15 and had been at Georgia from 2016-18 before returning to the Razorbacks as the head coach, was one of the reasons why Stewart chose the Hogs.

Coleman said he enjoys having Pittman back in the state.

"He's a developer," Coleman said. "There are some guys who want to try to get all the blue guys and the star guys and put them out there. With Coach Pittman, he'll get all of the kids and from the day they step on campus to the day they leave, they'll be better. That goes a long way."

While coaching Stewart, Coleman called him a highlight film. He's confident that Stewart will compete and play well for the Razorbacks.

"Jashaud is going to make an instant impact," Coleman said. "With his work ethic and his relentless pursuit to be great, it's going to be hard to keep him off the field."