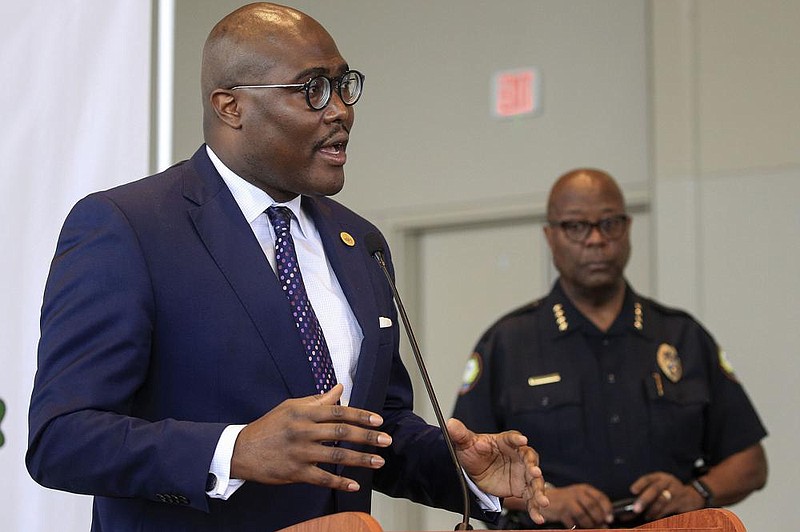 Little Rock police will no longer be asking, at least for now, that the Arkansas State Police investigate city officers' use-of-force incidents, according to Chief Keith Humphrey.

The plan to have an outside agency conduct the investigations was announced at a June 8 news conference where the chief and Mayor Frank Scott Jr. discussed department changes and transparency amid a national movement for police reforms in the wake of George Floyd's death.

Floyd died May 25 while being detained by Minneapolis police officers. All of those officers now face charges in his death.

But, ongoing covid-19 concerns and an uptick in work for both departments has sparked a reevaluation. Both played into the decision to put the plan on hold for now, Humphrey said. The change was first reported by the Arkansas Times.

"We just all sat down and had a big meeting, and just with everything going on -- the whole covid situation, both departments are really busy -- we just thought we'd put it on hold for right now and revisit it in the future," Humphrey said.

Humphrey wants to see a return to pre-covid-19 normality before revisiting the matter.

"I think once everything gets back on full pace ... right now it's just in the best interest, until we can completely focus on that and dedicate the time to get it done, it's just best to put it on hold right now," Humphrey said.

Humphrey said he told the mayor about some of the concerns, and he said the mayor respects his decision to put a hold on the plan.

The state police agency was notified about the hold going into the weekend, according to Arkansas State Police spokesman Bill Sadler.

"Late last week, the state police was notified the discussions that had been underway were being placed on hold," Sadler said. "That was good enough for us, once we received that information."

The state police will be open to reviving the plan once the Little Rock Police Department is ready to continue talks about it, Sadler said.

"We just made it clear that our door is open consistent with the law and the mission of the department," Sadler said. "The law states the Arkansas State Police is to assist local law enforcement agencies upon their request."

Ronnie Morgan, president of the Little Rock Fraternal Order of Police, said he did not hear plans about the arrangement with the state police, so he could not offer an informed opinion on the state police's role in investigations until he had more information.