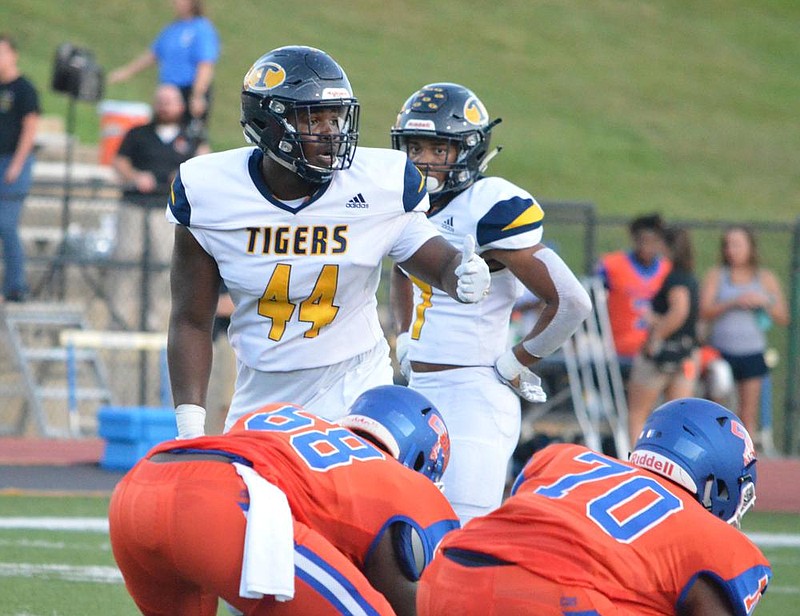 Defensive lineman Andy Boykin had 65 tackles, 9 tackles for loss, 5 sacks and 7 quarterback hurries as a high school senior last season, but Boykin said his first love as a child was basketball. (Photo courtesy of LaGrange Daily News)

When the University of Arkansas signed defensive lineman Andy Boykin, the Razorbacks got a lineman who resembled what Alabama, Georgia and LSU routinely have on their rosters.

ESPN rated him a 3-star prospect, the No. 43 defensive end nationally and the No. 51 prospect in Georgia.

Stewart At a Glance

"Next year we'll have three guys in the SEC, so we're used to high-profile recruits," Glisson said. "That particular position - the defensive line/defensive tackle - you just can't find guys that are that size and that can move.

"We have a linebacker at Alabama and we have a receiver that's at Auburn, but everybody that came through said you just can't find them. They're hard to find. That's what really made him appealing."

"I think he blocked, I want to say, four or five PAT field goals," Glisson said. "To me, that's what kept jumping out to me because that's one of the times he would be single blocked. Almost every time during the season on the defensive line he was getting doubled teamed, so anytime he got single blocked, like on PAT field goals, he's halfway in the backfield.

"It got to the point where us coaches on the headsets would say to each other, 'Watch Andy. He's going to block this.' He had a knack for it. It just showed his dominance when he had a one-on-one block."

When he was young, Boykin didn't see himself playing football. He had other dreams.

"Not many people know this, but my first love was basketball," Boykin said. "I used to hate football because I didn't like contact."

Boykin did play flag football at age 5, but he didn't start liking it until the seventh grade. The rest is history.

"My whole family grew up playing football, so I knew at one point I would play football," Boykin said.

As a senior, Boykin recorded 65 tackles, 9 tackles for loss, 5 sacks and 7 quarterback hurries. As a junior, he had more than 50 tackles and 7 sacks.

A one-time Auburn commitment, Boykin has a 320-pound bench press, 450-pound squat and a 290-pound power clean. Arkansas Coach Sam Pittman had a previous relationship with Boykin while at Georgia.

"Coach Pittman and I go back a ways," Boykin said. "He's a real big family guy. You don't meet too many head coaches that are family oriented. Most of them are about football and they always talk about football first and then they'll talk about family.

His official visit to Fayetteville on the Jan. 31-Feb. 2 weekend convinced him Arkansas was the place for him. He orally committed to the Razorbacks that Sunday. His relationship with running backs coach Jimmy Smith, cornerbacks coach Sam Carter and defensive line coach Derrick LeBlanc also played a role in his decision.

"Coach Carter, he's the funniest coach out of all of them," Boykin said. "Of course, Coach LeBlanc, my position coach. I feel like he's a really great person and he's another father figure. He treats me exactly like my father would.

"To me, I feel like he resembles my father."

Within minutes after arriving for his official visit, Boykin fell in love with Fayetteville.

Boykin's love of basketball led him to be fond of a rival of Arkansas basketball.

"My favorite team is Kentucky, but that's going to change since I'm a Razorback now," Boykin said. "They were my favorite team, so I always told myself I was going to play basketball for the University of Kentucky."

'Gentle giant' is a good description of Boykin. He has an infectious smile, too, along with a big personality and soft heart that helped him to win over coaches, teachers and classmates, including the special needs students at his school.

Glisson was asked how to describe Boykin.

"Big, humble. I don't mean this is in a derogatory way, but big baby," Glisson said. "He just has a good heart, but he's a massive human being. That's the first thing that comes to mind, and I mean that in a good way."

Boykin's personality will likely make him a fan favorite of Razorbacks fans.

"He's never, ever been above anybody," Glisson said. "Anywhere we go, if anyone wanted to interview him or fans wanted to say hello or whatever, he has always taken the time to be personable with people. I just think that's a great trait to have."

Boykin already looks like an SEC lineman, but Glisson is eager to see him in two to three years.

"Once he gets there and gets into the weight room program and feeding program, there's no telling how he's going to look," Glisson said.