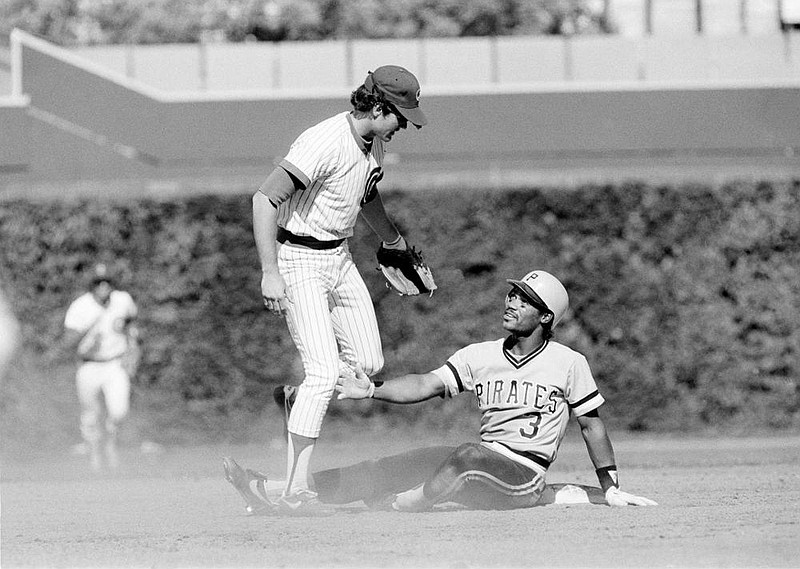 Johnny Ray, shown here with Ryne Sandberg of the Chicago Cubs in 1984, said having a locker next to Hall of Famer Willie Stargell paid dividends for him in his career. (AP file photo)

FAYETTEVILLE -- Johnny Ray was a lot like the other teen-aged guys around his hometown of Chouteau, Okla., in the mid-1970s.

He was good at every sport while it was in season.

Where Ray differed from young men in Chouteau and other areas around Tulsa, particularly the Black kids in northeastern Oklahoma, came during the summer.

Ray's love for baseball invigorated and propelled him during the summer months, while many of his contemporaries were hitting the all-star basketball circuit or doing extra football work.

"In this part of the country, football was the main thing," Ray said. "And I think basketball was probably running second at the time.

"Baseball was kind of like obsolete. Most of the Black athletes, probably because of the competition in football and basketball around this area, never really participated in baseball. In summertime, when baseball was prevalent, they'd go play AAU basketball or work in summer pride with some football. They never really took a serious matter to [baseball]. I can't think of any, really, when I went through high school there wasn't any African American ball players. Not in this area."

Ray not only had natural baseball instincts and a huge competitive drive, he also carried a self-taught bonus: He could hit from both sides of the plate.

"I just started tinkering with it when I was younger," Ray said of his switch-hitting prowess. "Shoot, I was probably 14 or 15 years old or maybe a little younger. I was just experimenting with it a little bit and kind of liked it and just stuck with it."

Though his father, Ray Charles Ray, had played some semipro ball, the idea of switch-hitting was strictly Johnny's idea, and he excelled.

His two-sided hitting, slick glove work, supreme hand-eye coordination and dedication to the game took Ray far. He became a star second baseman on the University of Arkansas' first College World Series team in 1979, put together a strong 12-year professional career, including a .290 lifetime batting average in the major leagues, and earned a reputation as one of the toughest outs in baseball in the 1980s.

Ray checks in at No. 3 on the Arkansas Democrat-Gazette's list of the best pro baseball players in UA history.

Ray, a 5-11, 180-pounder in his playing days, was a two-time All-Southwest Conference player for the Razorbacks and a key cog on the 1979 Arkansas team that finished runner up at the College World Series.

"Johnny Ray was -- boy, you talk about a competitor, I mean, for Johnny Ray winning was a big deal," said former Arkansas Coach Norm DeBriyn, who recruited Ray out of junior college.

"That compact swing, and being a switch hitter. He was one of those guys that the higher level he played, the better he got. I mean, in junior college, he didn't light you up. His numbers weren't anything to really brag about.

"But then he gets to Arkansas and he's a little better. He gets into professional baseball and he's better. In the big leagues he's better. It's just amazing."

Ray played in the majors with the Pittsburgh Pirates (1981-87) and California Angels (1987-90), before wrapping up his career with a two-year stint with the Yakult Swallows in Japan.

He was drafted by the Houston Astros but was soon traded to the Pirates. A rookie sensation in his first full year in 1982, Ray played in all 162 games, hit .281 and was chosen National League Rookie of the Year by The Sporting News. The Baseball Writers selected another second baseman, Steve Sax of the Dodgers, as its top rookie in a close vote ahead of Ray.

The following year, he earned the Silver Slugger Award as the top-hitting second baseman in the National League with a .283 average and a league-high 38 doubles. He followed that up with a career-best .312 average in 1984 but finished just behind Chicago's Ryne Sandberg (.314) for a repeat Silver Slugger honor.

In an era when contact hitting and speed were prevalent in the majors, Ray was one of the best. He had between 163 and 184 hits for seven consecutive seasons and never struck out more than 47 times.

Ray hit .277 in his final full season in the majors with the Angels in 1990, which is the kind of production that could have extended his career in MLB for a while longer. Instead, he was fed up with the manager at the time, Doug Rader, and decided to play out his career in Japan.

"I didn't see eye to eye with the head coach at the time," Ray said. "I didn't care for comments that he made and we didn't click at all. He had another year left on his contract, and he made it clear he didn't want me playing another year with the California Angels. So I just looked for other options."

Ray recalled being recruited to play for the Razorbacks and the connections he made in Northwest Arkansas.

"Coach DeBriyn came in and acted like he really wanted me to come up there and play," Ray said. "I liked the college life I saw. I talked to the players, talked to people around there. It was the best fit for me. It turned out to be the best thing I could've done at that particular time."

Ray said he was not outgoing in college and mostly stuck to himself, but he made enduring friendships in his two seasons at Arkansas, starting with DeBriyn.

"Coach DeBriyn is a great man, and I really like him," Ray said. "It wasn't just about baseball with him. Once players leave, a lot of coaches don't have much to do with them, but he wasn't like that and that's why I respected him as a college coach. ... I've been around a whole lot of them and I know the difference. He's one of those great individuals."

Ray joined with former Arkansas teammates Kevin McReynolds and Tim Lollar to foot the bill of about $200,000 for installing the first set of lights at Baum Stadium. The UA has a picture of DeBriyn posing with those three at a major-league game when Ray's Pirates played at San Diego in the early 1980s.

Ray joined the Pirates in late 1981 in what was a lull for the franchise. The "We Are Family" Pirates had won the World Series in 1979, and the Pittsburgh teams of 1990-92 were the foil of the NL-winning Atlanta Braves and Cincinnati Reds. The Pirates of the mid-1980s under Chuck Tanner and then Jim Leyland, could not get past the St. Louis Cardinals, Chicago Cubs, New York Mets or Philadelphia Phillies to reach the playoffs.

And that is one of the biggest regrets of Ray's career.

"There wasn't just a whole lot of highlights because we never got a chance to play in the playoffs," Ray said. "They didn't have the wild card or the second wild card or nothing like that during my career when I played.

"A lot of the players who were still there from that '79 World Series team in Pittsburgh, they were over the hill, basically playing out the string, so to speak," Ray said. "Myself, Tony Pena and a few others, there wasn't enough for us to win. That's just how it was."

Young stars like Barry Bonds, Bobby Bonilla and Andy Van Slyke came late in Ray's tenure with the Pirates and Leyland turned them into NL East winners three years in a row.

Ray said players like Willie Stargell, Bill Madlock, Dave Parker, Bill Robinson, Omar Moreno and others showed him how to conduct himself as a professional.

Ray, 63, retired to Chouteau after his playing days, to spend more time with his wife Tammy, son Johnny Jr., and daughter Jasmine.

In the winter of 2014, his hometown put up a sign: "Chouteau, Home of Johnny Ray, Professional Baseball Player."

The good fortune of having a locker early in his career adjacent to the future Hall of Famer Stargell paid dividends for the young Ray.

"I talked to Willie Stargell and he stayed 20-something years in the big leagues," Ray said. "He said the only regret he had was he didn't get out earlier so he could be with his family and do things.

"I didn't want that for me and I didn't want to be a career player and coach or whatever. Once my time was done, I pretty much wanted to get out of it. So I just came home and stayed here at the house and raised my kids and was an at-home father." 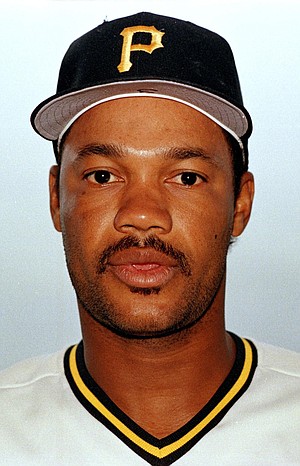