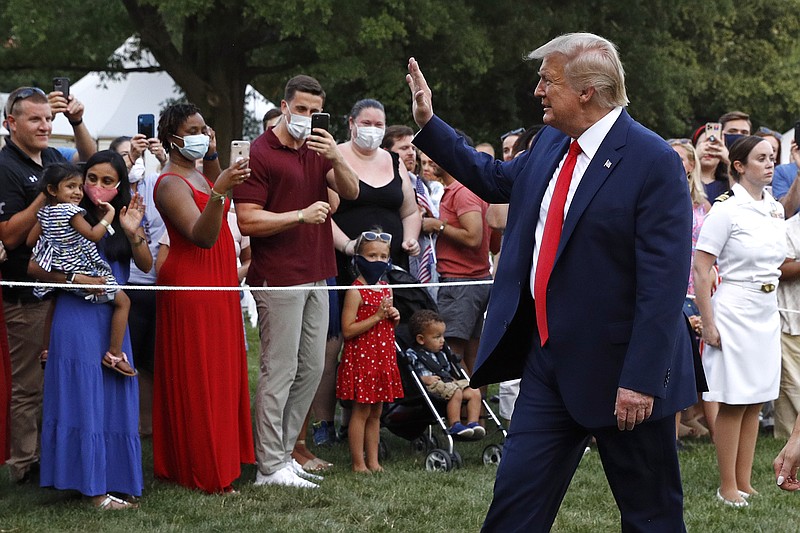 President Donald Trump greets visitors as he walks on the South Lawn of the White House during a "Salute to America" event, Saturday, July 4, 2020, in Washington. (AP Photo/Patrick Semansky)

WASHINGTON -- President Donald Trump is set to hold an outdoor rally Saturday in Portsmouth, N.H., according to the president's campaign.

The campaign rally at Portsmouth International Airport will come three weeks after an indoor rally in Tulsa, the president's first of the covid-19 era, drew a smaller-than-expected crowd amid concerns of rising infections in the region.

The announcement of the Portsmouth rally noted that "there will be ample access to hand sanitizer and all attendees will be provided a face mask that they are strongly encouraged to wear." Many people at the Tulsa rally skipped wearing masks, and relatively few masks were seen during his speech at South Dakota's Mount Rushmore on Friday.

Public health officials are cautioning against holding large gatherings as the virus continues to spread throughout much of the country, but they believe outdoor crowds are relatively less risky than indoor gatherings. White House counselor Kellyanne Conway said last week that Trump may more frequently turn to outdoor venues for campaign speeches.

"We need to understand it's a new world in terms of there are many people who support the president ... who are not going to another rally," Conway said. "It's high risk, low reward for them, because they already support him."

Trump and his team hyped his return to the campaign trail with last month's Tulsa rally, which ended in a disappointing turnout and an outbreak of the virus among staff members and Secret Service agents. A top campaign fundraiser, Kimberly Guilfoyle, also tested positive for coronavirus ahead of the president's speech at Mount Rushmore.

The president narrowly lost in New Hampshire to Democratic nominee Hillary Clinton in 2016. Before the pandemic, campaign officials had pointed to the state, in addition to Minnesota and New Mexico, as a place where they saw a chance to expand the electoral map.

"Trump's response to the covid-19 crisis has been chaotic and woefully inadequate, resulting in thousands of Granite Staters contracting the virus and hundreds of lives lost, while causing significant damage to our state's economy," New Hampshire Democratic Party Chairman Ray Buckley said after the rally was announced.

"Instead of helping our state safely recover," Buckley said, "Trump is flying in for a political rally that will only further highlight the chaos he has caused."

Trump has previously talked of holding rallies in Texas, North Carolina, Florida and elsewhere. Now his campaign is taking a more cautious approach as those states and others have experienced upticks in cases, raising concerns that even Trump's own supporters may not be willing to turn out in droves. A campaign aide described the campaign's thinking on the condition of anonymity.

Trump also plans to keep making frequent official visits to battleground states, where he is expected to continue highlighting his administration's response to the pandemic and efforts to reboot the nation's economy. Those smaller events don't replicate for Trump or his supporters the energy of his roaring arena rallies, but they are often paid for by taxpayers and still feature political broadsides at Democrats.

Trump held two in-person fundraisers in early June. More such events have yet to be scheduled, but aides insisted there was "pent-up demand" for high-dollar events featuring the president that have been postponed during the outbreak.