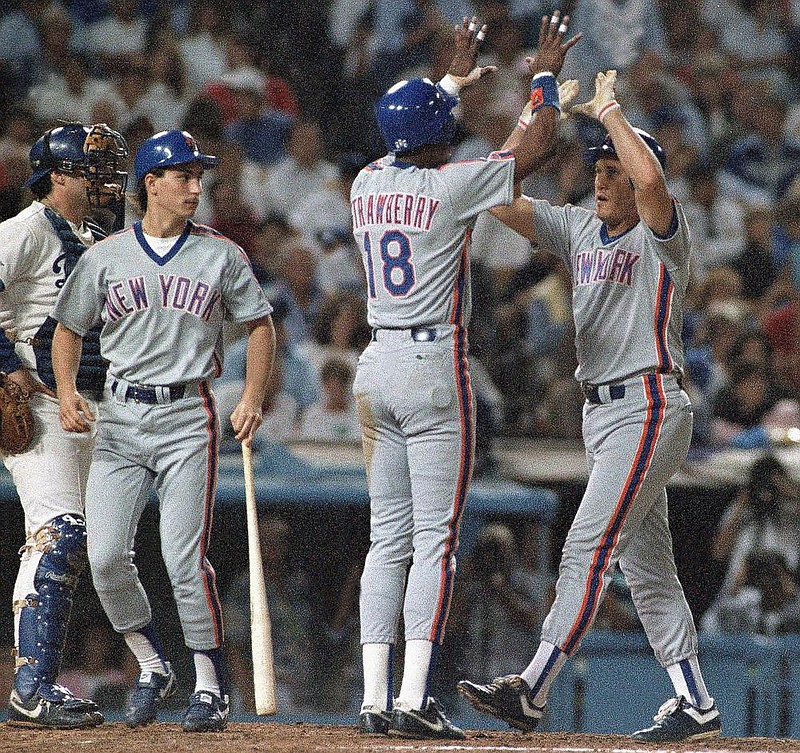 Former New York Mets left fielder Kevin McReynolds (right) is congratulated by teammate Darryl Strawberry after hitting a two-run home run in a 1988 game. McReynolds, a North Little Rock native who won the Southwest Conference’s first triple crown at Arkan- sas in 1980, played 11 seasons in the major leagues and was known for his versatility. (AP file photo)

FAYETTEVILLE -- One of Kevin McReynolds' greatest assets on the baseball diamond was making the game look effortless at times.

McReynolds' natural talent as a hitter, fielder and runner served him well for 11 seasons in the major leagues, and the ease with which he displayed it also created fuel for some of his critics.

McReynolds didn't try to bring attention to himself with his words or his off-the-field actions, and some mistook his Arkansas-paced delivery and demeanor for a lack of passion.

He was both beloved and despised by fans during his five-year run with the New York Mets, whom he helped to the brink of the World Series in 1988.

"I was never trying to play to please anybody in particular," McReynolds said. "All I was doing was going out to play the best way I knew how. If my style didn't suit them ... that's their problem.

"You know, style for me is no big deal. Some people think that's the only way they can do it. I just went out and played. It wasn't like I was loafing like people said I was. I guess that was my natural gait, or whatever it is. But I was out there to get the job done the best way I know how."

The North Little Rock native slots in at No. 4 on the Arkansas Democrat-Gazette's list of the best Razorbacks in professional baseball.

"He was probably the most talented player I had been around," said former Arkansas Coach Norm DeBriyn. "I mean, he had power, he could hit, he could run. ... He just had all of the tools."

McReynolds won the Southwest Conference's first triple crown at Arkansas in 1980 with a .386 batting average, 17 home runs and 57 RBI.

His best season in the majors came in 1988. McReynolds hit .288 with 27 home runs and 99 RBI and finished third in the National League MVP vote behind Kirk Gibson of the Los Angeles Dodgers and his teammate Darryl Strawberry with the Mets.

"I think that was the season where I stole bases and never was caught," McReynolds said.

Indeed, McReynolds was successful on all 21 stolen base attempts in 1988, which stood as the major league record for the highest number of steals in a season without being thrown out until Chase Utley of the Phillies went 23 for 23 in 2009.

"It wasn't like I had blazing speed or anything," McReynolds said. "It's just I was kind of an afterthought to some pitchers sometimes. Overall it was a really good season for me, the second half especially."

McReynolds led the National League in outfield assists in three seasons, including with a career-high 18 in 1988.

In Game 1 of the National League Championship Series, McReynolds endeared himself to Mets fans by scoring all the way from first base on a two-run bloop single to center field by Gary Carter that just eluded the diving John Shelby with two outs in the top of the ninth inning.

McReynolds drove his left shoulder into Dodgers catcher Mike Scioscia, a notorious plate blocker, several feet out from home plate, and slapped his left hand on home after the two crashed to the dirt. McReynolds scored the go-ahead run in what became a 3-2 Mets victory.

"It probably rang both of our bells," said the 6-foot, 215-pound McReynolds. "It's just one of those situations where I'm a really important run and he's trying to prevent a really important run. That just seemed like the best option for me at the time. We're both pretty good-sized guys. Fortunately I was able to score the run.

"He definitely had his foot planted and his shin guards and all right in the way. So, you could slide into that and take a chance on hanging a cleat in something, or you can hit him. But he's a tough guy. It rang my bell and I'm sure it rang his bell. It's just one of those plays that sometimes you had to make."

McReynolds, drafted by Milwaukee in 1978, elected not to sign with the Brewers after he posted gigantic numbers -- a .638 average, 15 home runs and 60 RBI -- for state champion Sylvan Hills High School as a senior.

He was an instant hit as a Razorback, as he helped lead Arkansas to a runner-up showing in its first College World Series appearance as a freshman in 1979.

Two years later, he held 12 offensive records at Arkansas, including single-season home runs (17) and RBI (57) when the Padres made him the sixth pick of the Major League Baseball draft.

McReynolds hit a mammoth walk-off two-run home run, his third of the game, to power Arkansas to an 18-17 win in the nightcap of a doubleheader sweep of TCU on April 27, 1980.

DeBriyn remembered the moment well, as he was sitting in his car beyond the left-field wall at the old George Cole Field.

"I had been thrown out of the game," DeBriyn recalled. "I'm sitting in a car in left field and the ball goes way over my car.

"I got out and this guy looks at me and he says, 'Oh, you're the coach.' He said, 'I'm from Arizona and I saw Reggie Jackson play a lot of college ball games, but I don't know if I've ever seen a home run hit further than that.'"

"I just told coach after that, I said, that was my acknowledgment to knowing he was sitting up there," McReynolds said. "I'm gonna leave it at that and move on down the line."

Mets fans chafed when, prior to game 7 of the 1988 NLCS, McReynolds said he would win with either outcome. A win and the Mets would play in the World Series, while a loss would get him back to Arkansas sooner so he could fish and hunt.

"They don't even begin to understand what I was saying," McReynolds said. "They hear what they want to hear. I was as adamant about winning as anybody. But the consolation for me, if I don't win, a long, grueling season is over. I'm one of nine out there. I cannot carry the load by myself, nor did I ever think I could so."

McReynolds had a good start in San Diego, helping the Padres reach the first World Series in franchise history in 1984 in his first full season in the big leagues.

"That was a big deal," he said. "A lot of fun. We had a great season and came back from an 0-2 deficit in a best-of-5 series against Chicago, and ran into a team that had one of the greatest starts ever in all of baseball in Detroit. They pretty much put it on us in that World Series.

"Unfortunately for me, even though I was there, I didn't get to play because I broke my wrist in the third or fourth game of the playoffs. So I was merely a spectator."

Asked about his major league highlights, McReynolds said, "Well I endured for 11 years, so that's probably the biggest highlight. It's a tough game. ... It's easy to see how it becomes a business and not just playing a game every day, even though that was the easy part of it, just playing every day."

McReynolds was not happy about being traded away from the Padres after a big season in 1986 in which he hit .288 with 26 home runs and 96 RBI in a career-high 158 games.

"I was kind of mad at the time," he said. "I just had the best season I'd had with San Diego. That really slaps you upside the head, knowing it's a business. It's not just playing.

"Turned out there's a pretty good group of guys in New York. They'd just come off of winning the World Series. It was a lot of fun playing there. It could be tough at times with all the media coverage. ... For the most part, it was a team with a lot of talent for several years there. We just never were able to completely get to the big show again, but it was a lot of fun. I'm glad I was there."

McReynolds said he typically sees former Mets teammate Rick Aguilera two or three times a year to play golf, and that he talks to other former teammates only occasionally.

He's happy with his post-MLB life.

"I've kind of worked on my own time clock," he said. "I have been fortunate enough to have retained some of the money that I earned and have really kind of set my own hours so to speak. So yeah, I've enjoyed it quite immensely."

McReynolds, who sold a duck hunting club he had run for 30 years a couple of years ago, retired to central Arkansas and lives in Little Rock.

"That's where I was born and raised," he said. "I'm very comfortable here. Arkansas has a lot to offer. I'm glad to be where I am. I'm alive and doing fine."