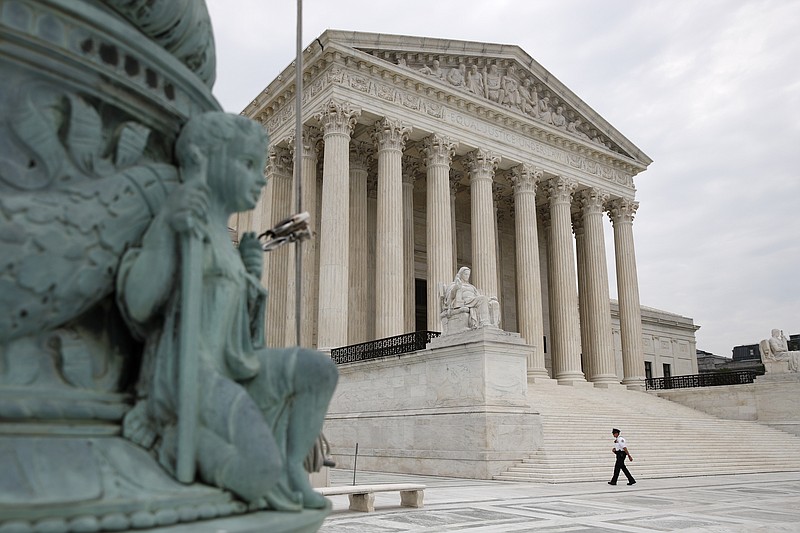 WASHINGTON — In a decision flavored with references to the Broadway musical “Hamilton” and the HBO sitcom “Veep,” the Supreme Court ruled unanimously Monday that states can require presidential electors to back their states’ popular-vote winner in the Electoral College.

The justices are often closely divided in major cases, particularly in ones concerning election law, but they found common ground this time.

The ruling, in cases in Washington state and Colorado just under four months before the 2020 election, leaves in place laws in 32 states and the District of Columbia that bind electors to vote for the popular-vote winner, as electors almost always do anyway.

There have been no elections in which the votes of “faithless electors” changed the result, but a swing of only 10 electors would have altered the outcomes in five presidential elections. In the 2000 election, George W. Bush beat Al Gore by just five electoral votes.

A state may instruct “electors that they have no ground for reversing the vote of millions of its citizens,” Justice Elena Kagan wrote in her majority opinion that walked through American political and constitutional history with an occasional nod to pop culture.

Such an order by a state “accords with the Constitution — as well as with the trust of a Nation that here, We the People rule,” Kagan wrote.

President Donald Trump has been both a critic and fan of the Electoral College.

In 2012, he tweeted, “The electoral college is a disaster for a democracy.” But in November 2016 after he won the presidency despite losing the popular vote to Hillary Clinton, he tweeted, “The Electoral College is actually genius in that it brings all states, including the smaller ones, into play.”

Monday’s ruling was not about the legitimacy of the Electoral College or an ongoing effort to effectively eliminate it by having states commit to support the national popular-vote winner. That proposal, which would likely be challenged in the courts, wouldn’t take effect unless states constituting a majority of electoral votes endorsed it.

The court acted on another issue — whether electors are free agents regardless of what voters in their states decide. The justices scheduled arguments for last spring so they could resolve the issue before this year’s presidential election rather than risk a political crisis by ruling after the country votes.

Kagan recounted how the Constitution’s original rules for presidential electors sowed confusion because there was no distinction between votes for president and vice president. She noted that the results of the 1796 election gave President John Adams his political rival, Thomas Jefferson, as vice president, a situation Kagan called “fodder for a new season of Veep.”

Things got worse four years later when Jefferson and Aaron Burr finished in an Electoral College tie, sending the election to the House of Representatives. It took 36 ballots and the influence of Alexander Hamilton to elect Jefferson as president, Kagan wrote.

“Alexander Hamilton secured his place on the Broadway stage — but possibly in the cemetery too — by lobbying Federalists in the House to tip the election to Jefferson, whom he loathed but viewed as less of an existential threat to the Republic,” she said.

Justice Clarence Thomas, joined in part by Justice Neil Gorsuch, agreed with the majority’s bottom line but did not adopt its reasoning. He said he would have relied on general principles of federalism to reach essentially the same result.

The ruling was generally welcomed.

“The court’s decision strikes a blow for legal and political stability and sanity,” said Richard Pildes, a law professor at New York University. “Every American understands themselves to be voting for the persons running for president, not for members of the Electoral College, and it is now clear that states can enforce that understanding.”

Colorado Attorney General Phil Weiser, who argued his state’s case at the Supreme Court, called the outcome “a win for orderly elections and our constitutional democracy.”

Colorado had urged the justices not to wait until “the heat of a close presidential election.”

“When we launched these cases, we did it because regardless of the outcome, it was critical to resolve this question before it created a constitutional crisis,” Lessig said. “Obviously, we don’t believe the court has interpreted the Constitution correctly. But we are happy that we have achieved our primary objective — this uncertainty has been removed. That is progress.”

When the court heard arguments by telephone in May because of the coronavirus outbreak, justices invoked fears of bribery and chaos if electors could cast their ballots regardless of the popular-vote outcome in their states.

The issue arose in lawsuits filed by three Hillary Clinton electors in Washington state and one in Colorado who refused to vote for her despite her popular-vote win in both states in 2016.

Kagan explained the electors’ thinking: “The three hoped they could encourage other electors — particularly those from states Donald Trump had carried — to follow their example,” she wrote. “The idea was to deprive him of a majority of electoral votes and throw the election into the House of Representatives.”

The effort failed. “Only seven electors across the nation cast faithless votes — the most in a century, but well short of the goal,” Kagan wrote. “Candidate Trump became President Trump.”

The federal appeals court in Denver ruled that electors can vote as they please, rejecting arguments that they must choose the popular-vote winner. In Washington, the state Supreme Court upheld $1,000 fines against the three electors and rejected their claims.

The Supreme Court affirmed the Washington decision and reversed the ruling from Colorado.

The closest Electoral College margin in recent years was in 2000, when Bush received 271 votes to 266 for Gore. One elector from Washington, D.C., left her ballot blank.

The Supreme Court played a decisive role in that election, ending a recount in Florida, where Bush held a 537-vote margin out of 6 million ballots cast.

The justices scheduled separate arguments in the Washington and Colorado cases after Justice Sonia Sotomayor belatedly removed herself from the Colorado case because she knows one of the plaintiffs.

The cases were Chiafalo v. Washington and Colorado Department of State v. Baca.

​​​​​Information for this article was contributed by Mark Sherman of The Associated Press, by Adam Liptak of The New York Times, and by Robert Barnes of The Washington Post.